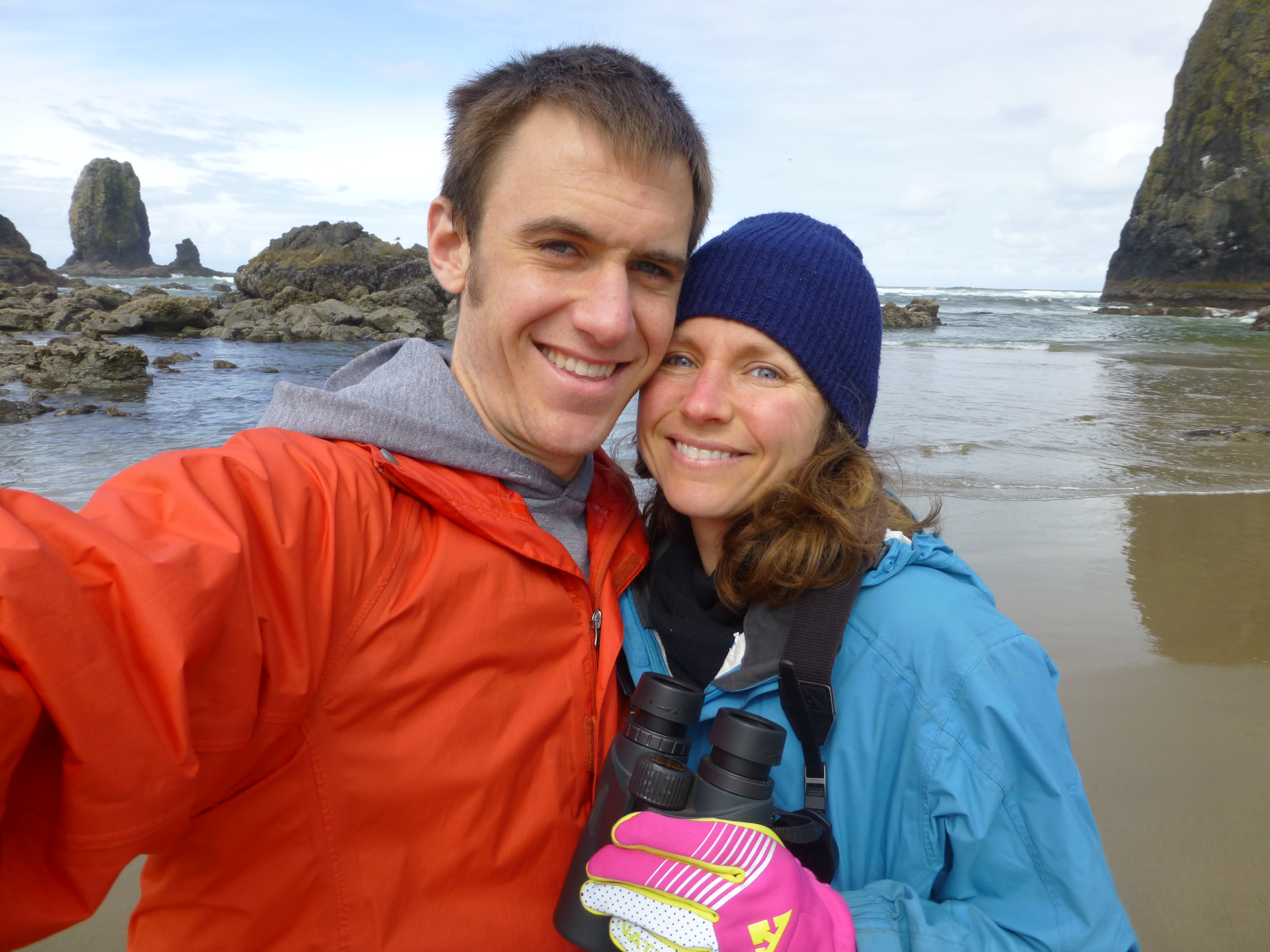 Each year between April and July the Tufted Puffins descend upon Haystack Rock at Cannon Beach in Oregon. This is a spectacle that Apryle and I did not want to miss this year, so we packed up the Versa, booked a hotel and made our way to Seaside Oregon.

The Puffins typically arrive in the first week of April and begin their search for a suitable nest on Haystack Rock. The courtship rituals take place and the female lays her single egg. The little Puffins emerge around mid June and fledge 45-50 days later. Therefore, Apryle and I had a four month window to catch a glimpse of one of our favorite birds.

We left the house around 4AM to arrive at Cannon Beach at low tide for optimal Puffin viewing. Low tide allows you to walk out closer to Haystack Rock. When we arrived it was chilly and overcast with a rain storm on the horizon. We wandered around the tide pools and saw the beautifully colored Harlequin Duck and rare Black Oyster Catcher. Not until the torrential downpour started did we see the Tufted Puffin, and by that point we were freezing and ready to seek shelter in the car.

The weather cleared up and we prepared for the next leg of the trip, a fourteen mile run from the trailhead situated in a neighborhood called Whaler Point to Ecola Point and back. Within minutes of starting on the trail we caught a glimpse of the Northwestern Salamander crawling through the mossy forest floor.

The trail pitched up sharply and we gained a substantial amount of vertical feet to Tillamook Head and Bald Mountain. The trail conditions were rough – standing water, slick wooden planks, fallen trees – a perpetual slick muddy surface. Needless to say this made running quite difficult and it took Apryle and I quite some time to travel the approximately 5 miles to Indian Beach. The coastal forest was quite scenic with lookout points over the Pacific and old growth forest surrounding us.

The trail was technically closed from Indian Beach to Ecola Point due to a substantial washout, but Apryle and I bushwhacked around it and reached the stunning Ecola Point Lookout. From here we traced back our steps for a total of 14.04 miles with 3,707 feet in 3 hours 44 minutes. We headed to Seaside to check in to our hotel and clean up some of the mud.

Our hotel was right on the beach and we enjoyed peaceful walk along it before turning in for the evening. The next day we decided to make another trip to Haystack Rock and watch the Puffins on a nice clear morning. Not only did we get excellent views of the Puffins but we also saw three Black Oyster Catchers and their nest.

On our way back to Newcastle, we decided to stop at Cape Disappointment and Leadbetter Point on the Long Beach Peninsula. Upon entering Cape Disappointment State Park, Apryle dropped me off at the first trailhead we saw and I ran down to meet her near the Lighthouse. It was roughly seven miles before I realized I had accidently went north on the Discovery Trail from the Beards Hollow Overlook. After realizing my mistake I jumped onto the narrow Westwind trail that ascended through a dense forest to the North Head Lighthouse. I increased the tempo on the North Head Trail to make up some time. I finally met up with Apryle and we hiked the final stretch to the Cape Disappointment Lighthouse completing my point to point of the State Park.

Our last stop for the day was at Leadbetter Point State Park. We decided to do a 6 mile loop spanning from Leadbetter SP to Willapa National WLR. Apryle was looking forward to some flat miles on the beach and easy track across the peninsula. We started on the Dune Forest Trail which offered views of Willapa Bay and skirted along the beach until we reached the Bay Loop Trail. The Bay Loop Trail gave way to the Bearberry Trail. The Bearberry Trail shifts from a grass strewn path into a wooded shrubby single track.

After only about a quarter mile the fun began. The dry forest floor filled with saltwater estuary. The trail was flooded with standing water and mosquitos found us quickly. For the next mile Apryle and I waded through thigh deep water on our way to the beach. It was slow going as we slogged across the peninsula. When we arrived at the beach signs were posted to protect Western Snowy Plover nesting grounds, so we stayed in our corridor and made our way to the Pacific. The shore was strewn with hundreds of sand dollars and the views were terrific.

After running along the beach for about a half mile we headed back east via the Weather Beach Trail and waded through the thigh deep water on our way back to the Dune Forest Trail. We completed the full six mile loop that ended up being a quite an adventure.