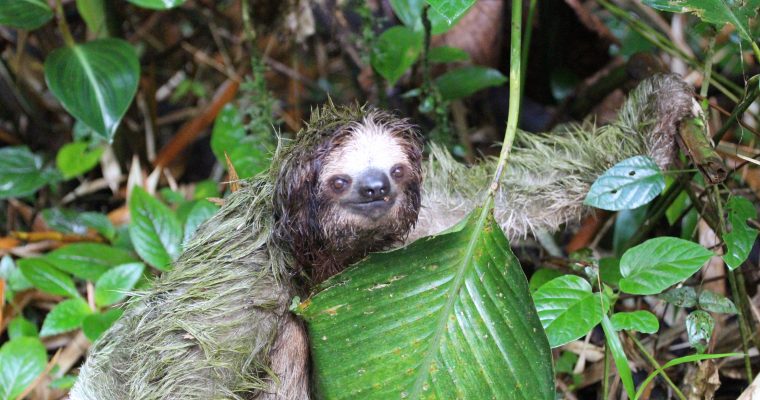 We continued east through La Fortuna. We drove under Cruces de Fauna, which looked like hanging net bridges for wildlife like monkeys, olingos, and sloths to use in order to cross roads. We drove past huge pineapple plantations. Costa Rica is the largest pineapple supplier … 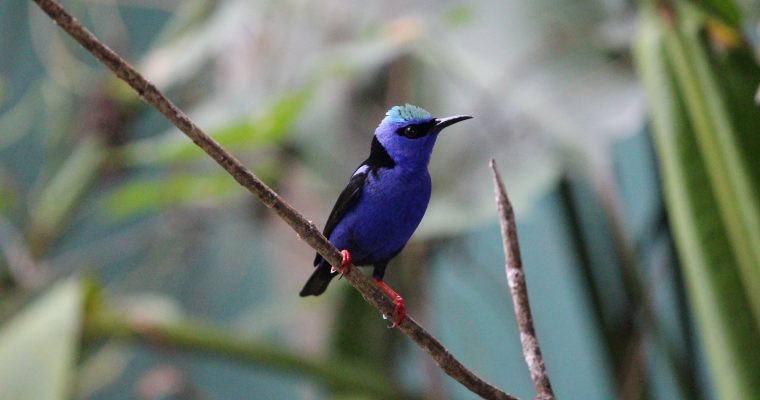 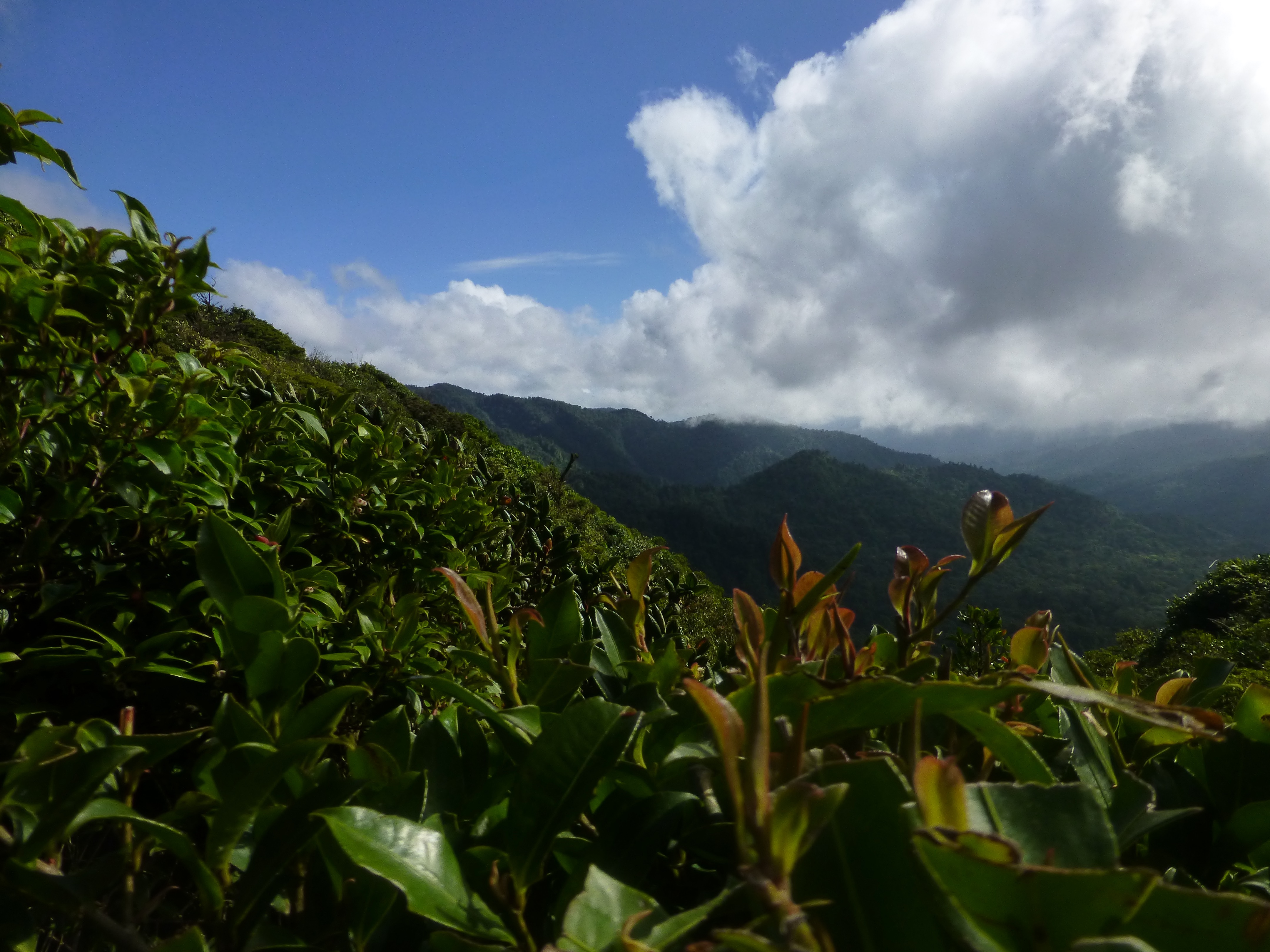 We were anxious to get on the road to Monteverde, but we had no money left to pay any tolls we may encounter. So, I went into the bank to try to get money out with our Visa. I had to get a ticket, like at a deli counter. It was about an hour wait, but we weren’t sure if we could get money from an ATM with a Visa, so we figured we had to do it. When my turn came, I explained as best I could how much money I wanted. She zipped my card, shook her head, asked if I had a PIN. I told her it’s a Visa and should not need a PIN. She said it was declined. She tried again but suggested we go to an ATM. I returned to the car defeated. We drove back a mile or so to the grocery store, where we remembered seeing an ATM. We tried the Visa at the ATM. It asked for PIN. We tried the Discover, no luck. We retreated to the car to strategize. It seemed like maybe the travel notice we put on the card may have not registered properly and there may be a hold on our card. The only option seemed to be to drive back to the hotel we came from so we could use their internet and see if we could tell what was happening. When we got back, we took another half hour to sort everything out. Turns out that if you want to use a Visa card like an ATM card, you must set up a PIN. As soon as Zach set up the PIN, the card was immediately available for use at ATMs. We stopped back at the grocery store again, got some money out finally, and headed north. Carara was awesome, but we were happy to leave the challenges we experienced in Jaco behind us.

A note on Monteverde and Santa Elena Costa Rica Road Conditions: We approached Monteverde from the south, driving up hwy 1. Hwy 1 was paved perfectly. We got gas at the corner of Hwy 1 and 606, then drove the windy dirt road up to Santa Elena. Our Suzuki Jimny handled the road fine. The stiff suspension seemed to exaggerate the rocks, washboards, and ruts. When we left Santa Elena, we headed north to get to La Fortuna. We went north on 606 which turned into 145 then 142, which wraps around Lake Arenal. The road down from Santa Elena was also really bumpy and not paved. We were glad we had a high clearance 4 x 4 so we didn’t have to go too slow or worry.

As we arrived in Santa Elena, the dirt road turned back to pavement. The farms we had driven through for the last half hour disappeared and in their place was a bustling town packed with pizzas, t-shirts, and zip-line tour companies. We had transported back to Estes Park. We found our hotel, Pension Santa Elena, got settled into our room, and chatted briefly with the receptionist about the pros and cons of booking a guide for Monteverde for the following day. We headed to TacoTaco to take advantage of our 10% discount offered by our hotel. After thorough discussion, we decided to forego hiring a guide, figuring we could get a guide the next day if we decided we felt we missed a lot. We had a huge, delicious meal, and retreated to our hotel to pack our backpack with snacks and rest up for Monteverde the next morning. At Carara the birding was fantastic at the entrance gate before the park opened, so we wanted to arrive early and thoroughly explore the parking lot.

On our way out of the hotel, Zach paused briefly to scratch the wagging hotel dog on the head. He snapped, stood up, and wobbled away on three legs. Everybody knows not to sit next to Dennis. Just outside of Santa Elena, the road turned again to rock and dirt and we bumped our way up to Monteverde Cloud Forest Reserve. Monteverde Cloud Forest Reserve is located along the Cordillera de Tilarán encompassing over 10,500 hectares (~26000 acres) of cloud forest. It was founded in 1972 and consists of 90% primary forest. As the name implies the cloud forest is an evergreen, montane, moist forest characterized by low-level cloud cover. The reserve receives 70,000 visitors annually and is home to over 3100 different plant and animal species.

We arrived around 6:15 a.m., about 45 minutes before the park opened, and parallel parked along the road just before the entrance gate. Within 5 minutes of arriving, a beautiful bird alighted on a line across the road – a motmot. The birds of Monteverde were waking up and we were there to hear it. The hummingbirds’ buzzing trills were one of the first sounds to pierce the morning air as they arrived at the neighboring coffee shop to feast at the flower gardens and feeders. The birds flew by and so did time as we snapped photo after photo of new species. The guides arrived, many on motorcycles, then tour buses and private tourist cars. The most memorable arrival to the parking area, however, was the Emerald Toucanet who landed in a tree high above the ranger station. We watched as he hopped between bromeliads, drinking from the wells formed by their leaves. We bought our entrance tickets, took a photo of the park’s trail map (they no longer hand out paper maps to conserve and reduce waste), and headed into the park.

What to wear at Monteverde… It was pretty chilly in the morning. Zach and I both wore pants and t-shirts. I wore a long sleeve shirt over my t-shirt. We both wore rain jackets. Our hands were cold for the first hour or so. By the middle of the day, we were pretty warm and could see it was not going to rain so we dropped off our rain jackets at the car. The evenings were cold, too.

Hiking in Costa Rica was unlike any hike that Zach and I have done together. We walked 20 steps and paused, 20 steps and looked and listened. My eyes hurt at the end of the day. It was like hunting, but our goal was to shoot birds with a camera not a gun. We were looking for any wildlife, but especially the resplendent quetzal and a sloth. Although the quetzals and sloths eluded us, we saw more than our fair share of trogons, mot-mots, and warblers. A band of coati descended the trail towards us, stepping off trail briefly to walk around us. Wild orchids and birds of paradise lined the trail. We visited the continental divide and took in sweeping views of the cloud forest. We walked across the quintessential bridge, high in the canopy. Wind whipped the trees and an endless stream of clouds swept across the sky all day. During our final loop through the park, just as the park was about to close, a cat-like, monkey-like animal leapt from tree to tree over our heads. We later identified this animal as a northern olingo. We had walked 9 miles at Monteverde Cloud Forest Reserve.

I drove back to town and Zach ran back. We decided to try a private reserve the next day called Curi-Cancha because of its reputation as a birding hotspot. We liked TacoTaco so much we went back again for dinner. It was at TacoTaco that we realized we had lost our credit card. Back-tracking through the day, the only place we could figure we left it was at the ranger station. Although we wanted to be at Curi-Cancha when it opened, we would have to go back to Monteverde to see if they had our credit card. We stressed about it as little as we could.

That night, Zach was sick. Really sick. All night.

He managed to drag himself out of bed to run up the hill to Monteverde. I drove and met him up there. For a second day, we arrived before the park opened. So did the toucanet. I waited at the ranger station and explained to the guides trickling in what I thought had happened. At 7:01, a ranger handed me our credit card and said, “Here is your card, but we spent all of your money. Just kidding!” I gave him a tip for their help and skipped happily down the road to tell Zach the fantastic news that our credit card was safe.

We piled into the car and zoomed back towards Santa Elena to Curi-Cancha. Just one kilometer from Monteverde NP,  Curi-Cancha is a much smaller private reserve covering 72 hectares (178 acres). However, there is roughly the same trail mileage and bird viewing opportunities. The reserve was established in 1997 and contains both drier forest at the lower elevations and cloud forest at the higher elevations. There is a nice mixture of primary forest, secondary forest and open pasture.

When we bought our entry tickets, we asked the desk attendant to identify spots where we might have the best chance of seeing a sloth and quetzel. They had spotted a sloth in a tree near the parking lot yesterday, so we spent a good deal of time scanning the trees there. We walked the trails slowly and Zach continued to battle his GI problems through the morning. There were more fields/open areas and many birds seemed to hang out around the forest edge. The vegetation was very different from Monteverde Cloud Forest Reserve. It felt dry and brittle. We looped around and around covering about 7 miles, photographing new species. We left as the park was closing and went for pizza.

Monteverde isn’t really how shows make it out to be. I mean, I assumed there were sloths on everything! There isn’t! We were over halfway into our trip and frankly, I was getting a bit panicky that we might not see a sloth. We laid in bed and searched for where we could find a sloth. As luck would have it, there was a place in La Fortuna – a little private swath of farmland that was restored to rainforest – known for its high concentration of wildlife. I emailed to reserve us spots on a noon guided tour at Bogarin trail. 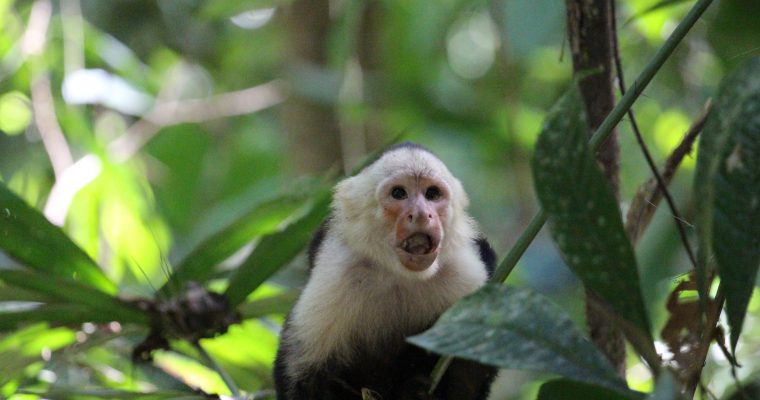 Apryle and I took a trip to Costa Rica (January 18th to January 28th) and traveled around the central portion of the country. Part one includes travel from San Jose to Jaco and Carara National Park (19th to 21st). Part two highlights travel from Jaco …