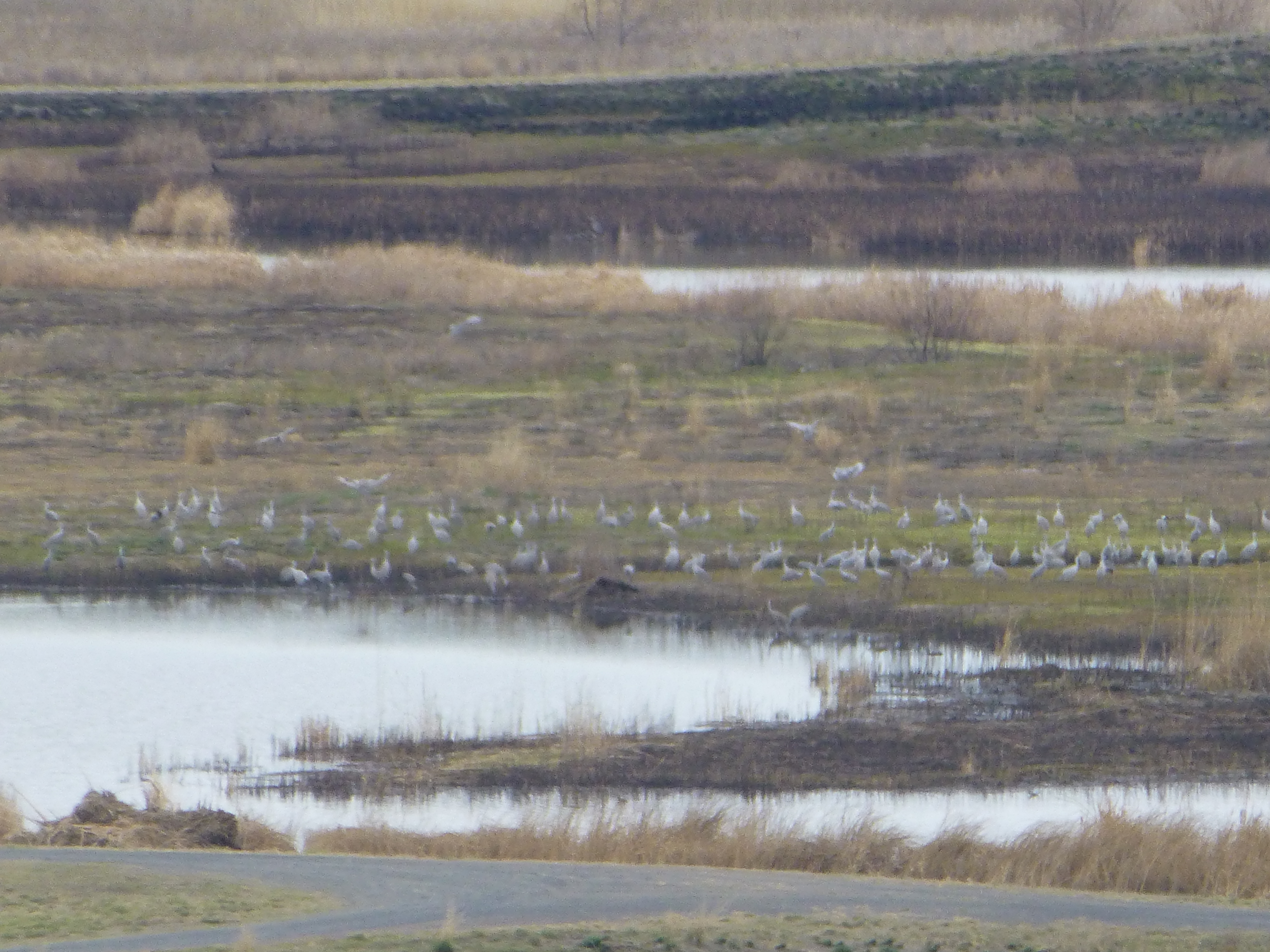 Before the alarm sounded, Apryle and I were stumbling through the dark apartment, trying to quietly gather our supplies for the day. Five in the morning is far too early for chirping parakeets, and therefore, we needed to stay silent and keep light to a minimum. We were equipped with bird books, binoculars, and a camera. Our mission was to locate Burrowing Owls near Othello and watch thousands of Sandhill Cranes descend on the Columbia National Wildlife Refuge.

Our route was west via highway 26. The rolling hills gave way to flat farmland as we approached the refuge. Based on some tips from other birders, we turned up an obscure dusty stone road just outside of Othello. Here we were to pay close attention to a cement culvert that followed the road and when we spotted a tree stump to scan the ground for the burrow.

The weather was not ideal for searching such barren country, the wind was howling, the temperatures were slightly above freezing, and the sky was a hazy overcast. After walking along the road for 30 minutes we decided to check a culvert that ran perpendicular through the field instead. Here we located a culvert with a tree stump, and given the nonexistence of plant life in sight, we were quite sure this was the spot. After about 20 seconds of waiting a Burrowing Owl flew in and landed on the stump. We watched it shuffle around the entrance of the burrow for several minutes. In that time we observed the Owl eat a mouse, scan the area for predators, and check on the chicks. We agreed that this was one of our favorite birding moments of all time.

We had additional plans however, so we reluctantly left the Burrowing Owl and headed toward the Columbia National Wildlife Refuge. The Refuge is a unique geological mixture of cliffs and canyons, with numerous lakes peppering the landscape. The flora carpeting the landscape is a mix of Sagebrush and Grasses. The refuge is a part of the Drumheller Channels, which is a labyrinth of basalt butte-basins within the Columbia Plateau. The many lakes, irrigated croplands nearby, and mild winters of the refuge attracts large numbers of migrating and wintering birds.

The early spring is a particularly good time to catch a glimpse of thousands of migrating Sandhill Cranes. This was a spectacle that Apryle and I were eager to see for ourselves. However, when we finally arrived at the lookout, there was not a single Sandhill Crane in sight. We assumed that they went to the fields to eat during the day and returned to roost in the late afternoon. Unfortunately, we were unable to stay into the afternoon due to a work appointment in Moscow. So we moved onto the next order of business, an exploratory run.

It was my bounce week before my highest mileage week leading up to the Lake Sonoma 50 miler. This made the goal for today 10 miles, and we were sure we could find enough trails to make it happen. We started along the Crab Creek Trail, which was a beautiful riparian corridor with willow thicket and wild rose. Then we took the spur onto the Frog Lake Trail which ascended a Sagebrush covered mesa, offering panoramic views of the stark landscape below. After arriving back at the junction we looped around Marsh Lake and finished up back at the Crab Creek Trailhead. We spotted Northern Shrikes, Kestrels, Buffleheads, Ringneck Ducks, Coots, Mallards, Sparrows, and Meadowlarks, but still no Cranes.

Before leaving we deciding to make one last trip up to the lookout over Marsh Unit One. There was another birder at the lookout, who stated she had seen them land yesterday. At this point we had about 20 minutes left until we needed to leave, but we wanted to stay as long as we could. Then we heard them, and spotted several dozen circling around the pond. They landed and called down more flocks, and eventually we were staring at several hundred Sandhill Cranes in the pond below. It was quite a spectacle, each Crane hovering over the pond, unleashing the landing gear and gracefully coming to Earth. An amazing way to cap off a perfect birding trip.