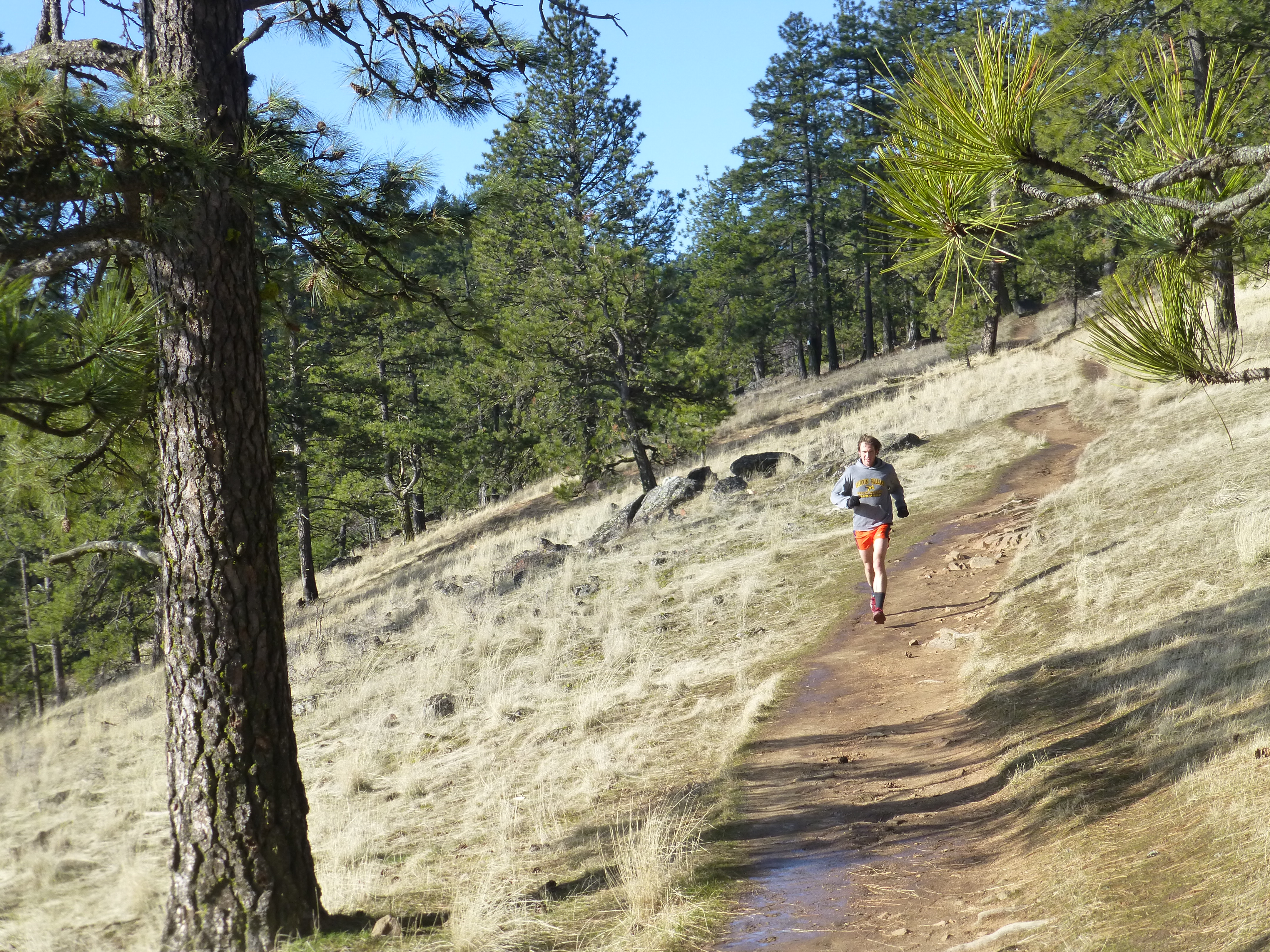 After moving to Pullman, I began scanning maps of the surrounding area to find suitable places to train for the upcoming race season. Although the city has an extensive network of paved paths which are great for midweek runs, I was interested in finding more rugged trails for my long workouts. One place that quickly stands out on the map is Kamiak Butte county park, roughly twelve miles north of our apartment. I tempered my expectations as I made the lonely monotonous drive through the sea of cut wheat fields. However, when I arrived at the parking area on the north side of the slope I knew that I was in for an unexpected trail running experience.

The park is only 298 acres, but it packs a punch. The micro-ecosystem is an oasis in the vast Palouse monoculture. The north slope more closely resembles Cougar Mountain than the surrounding farmland. The butte consist of Precambrian quartzite which was once at the bed of an ancient sea. Many eons following Kamiak’s submerged days, the rock became part of a mountain range which was nearly engulfed by Cenozoic lava flows, covering much of the area in a layer of basalt. Finally a little more recently, the prominence was declared a national landmark (1965) and named for a Yakama Chief – Kamiakin.

The county park is an important remnant of the disappearing native ecosystem of the Palouse Hills. It is home to 170 different plant species, 130 unique bird species and 30 mammal species. There is about 3.5 miles of advertised trail – making up the Pine Ridge Trail, but there are also about another 3 miles of primitive trails which loop around the narrow swath of land. The main destination is the official summit, rising about 1000 feet above the surrounding hills at 3641 feet.

Approaching the butte from the south is unremarkable, as the south slope is quite similar to the surrounding area. However, after making the turn west, the north slope comes into view and the towering dark green conifers take control. After spending a few weeks in Pullman, the forest becomes an anomaly, thus making Kamiak Butte an even more grand sight. From the main parking area there are three trail options: the Pine Ridge Trail, around the Sunset Trail which leads to the West Primitive Trail, or the Old Ski Run Trail.

The Pine Ridge Trail is a wide path that switchbacks upward to the ridgeline and is typically crowded. The Sunset Trail heads northwestward along the border of the forest as it transitions to lentil fields and eventually meets up with the Old Ski Run Trail and West Primitive Trail. The West Primitive Trail is single track and has a secluded feel, even though it is never too far from developed farm land. The Ponderosa Pines, Douglas Firs, and Western Larch create a mirage that makes one feel deep in an endless wilderness. The lighting changes, the temperature changes, and the plant life changes drastically ascending the northern slope. Shifting from the amber grasses and red rose stems of the hills, the north slope has Sword Ferns, Mosses and other shade tolerant flora.

The north slope is blanketed in a dense forest due to the steepness of the slope and the direction of the sun’s travel. There are very few hours of direct sunlight, and during these winter months, the sun does not reach the slope at all. As a result there are long shadows and cooler temperatures, causing the snow to linger long after the surrounding hills are dry. The water percolates the ground slowly resulting in more sustained growth of trees and underbrush.

After reluctantly ascending out of the cool pleasant forest, the ridgeline is a transition zone. Here there is a dotting of Ponderosa Pines interspersed with Ninebark, Ocean Spray, and Bunch Grasses. Strewn about are also jagged rocks that provide contrast to the plant life and the occasional trail obstacle. The south slope is dominated by the grassland prairie which once covered the Palouse hills. Here the grasses thrive on the warmer and shallower soil.

The view to the north is obscured mostly by the Ponderosa Pines, but Steptoe Butte, 15 miles to the north is visible at certain points on the ridge. The south however, offers constant panoramic views of the vast Palouse Farmscape. Some of the major prominences are Paradise Ridge (south of Moscow) and Moscow Mountain (east of Moscow).

When approaching the summit from the Old Ski Run, it is a simple .25 mile approach. Along the Pine Ridge Trail, there is about a mile of ridgeline to traverse and from the West Primitive Trail there is only about .5 miles to the top. Although, there are not many miles of trail, they can be looped and made into figure eights in several combinations, each offering a new prospective of the park.

Although Kamiak Butte is not the most expansive place I have ever trained, it is certainly one of the most contextually unique of places that I have explored. Rivaled only perhaps by The Bowl in the Guadalupe Mountains of West Texas. What Kamiak Butte lacks in acreage it more than makes up for in ecological importance and peculiarity.