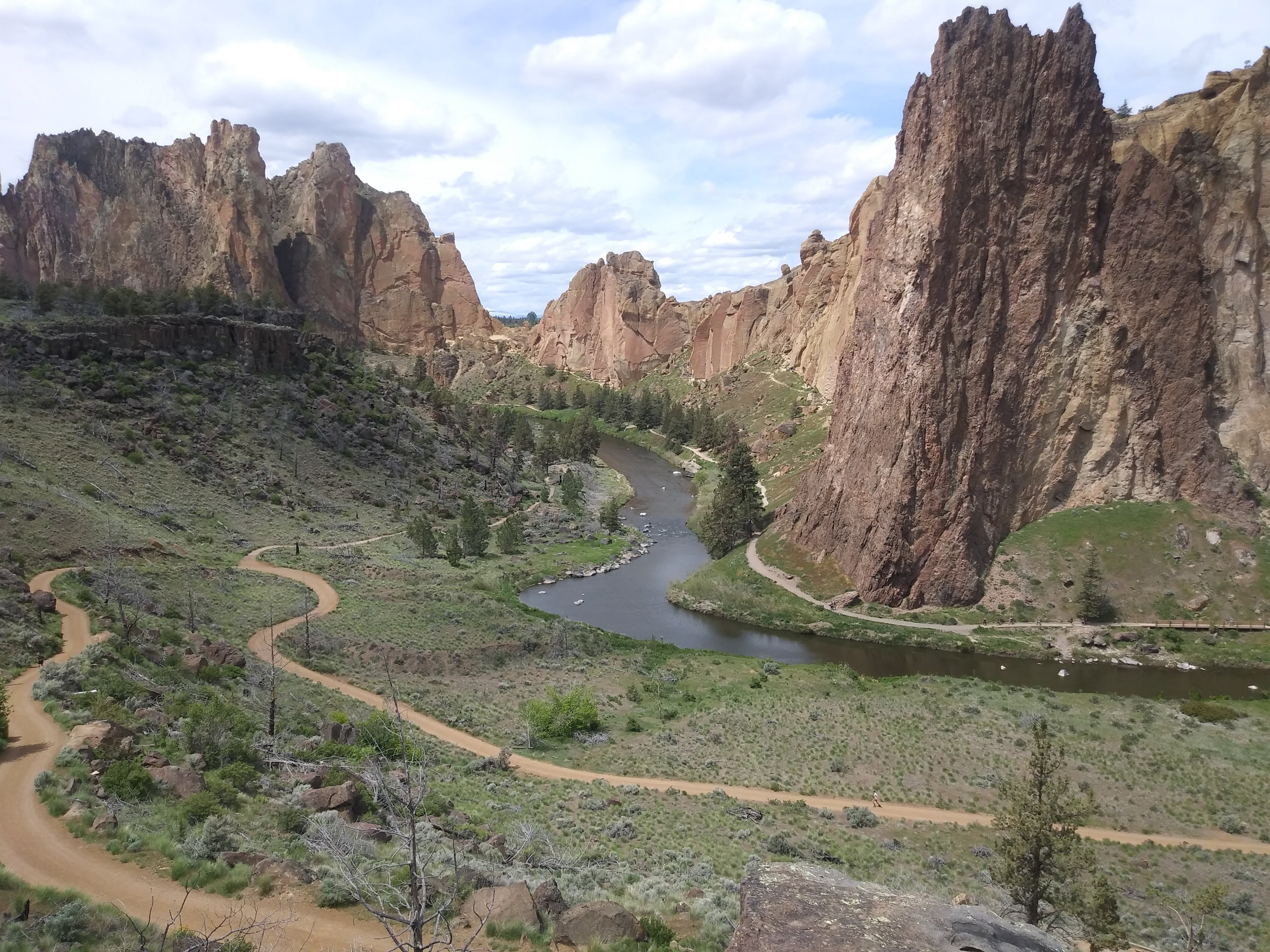 One month following my most disappointing race effort at Lake Sonoma, I toed the line at Smith Rock. Though it was my fourth race of the season, it was the first one that I signed up for this year. I was excited to explore the central Oregon high desert ecosystem and test myself against some challenging terrain.

Training following Lake Sonoma was a little strained and I had a difficult time focusing and shaking the defeated attitude. I was forced to make a quick turn around without much recovery, but I felt confident with the base that I had built this year. I threw in a good mix of vertical, speed, and easy days and with the exception of a slight bit of pain in my left knee, I felt well equipped to tackle a big 50K effort. I kept the mileage a little higher two weeks prior and then dropped it a little more drastically than usual the week of the race.

Apryle and I packed the car with race gear and gathered up all of Darwin’s food and toys in preparation for our weekend in Oregon. On our way to Smith Rock we made a quick stop at the Tollgate in Mt Hood National Forest and did a quick pre race run. The old trail was situated along the highway but was still encompassed in a lush green forest with blooming rhododendrons, dripping mosses, and all the while paralleled by the cascading waters of the Zigzag River. After our run, we continued south. Soon after exiting the national forest, there was a drastic change in our surroundings. Green forest gave way to a mixed shrub step with steep canyon walls as we made our way to Madras, our resting place for the evening.

Darwin refused to sleep on his perch and Apryle took one for the team, letting me get rested while Darwin snuggled in under her neck. In the morning, we made the short drive south to Smith Rock SP. We enjoyed the morning light hitting the towering tuff and basalt cliffs while the Crooked River shimmered below, weaving its way through the valley. The check in area was lively and I tried to keep my nerves in check and take in as many calories as my stomach would handle.

The race got underway at 8 AM and immediately off the start line we descended a short, steep hill down to the Crooked River. I settled into fifth place, where I essentially stayed for most of the day. The trail was quite runnable, minor undulations, with a mixed surface of hard packed earth and sand in sections closer to the river. For the first few miles we were in the shadow of the cliff and the temperatures were comfortable (low 40s). Then around mile three, things started to heat up as we transitioned from the River Trail to the Summit Trail. This trail climbed about 1200 feet as it switchbacked up and out of the official bounds of the state park. Things leveled out upon reaching the Grey Butte Trail which follows a ridge line into what I believe is the Crooked River National Grassland. Here after 7.6 miles I reached the first aid station.

I was the sixth person into the aid station, not far behind fifth, but I convinced myself not to worry about place, only time. At this point I was around 57 minutes, which I felt put me a good position. I topped off my handheld, and ate another gel and continued upward along the Cole Loop Trail. After reaching a highpoint of around 4000 ft, there was an 1100 ft descent to the western fringe of the course, here I ran my way back into fifth place and rested my climbing legs with some relaxing gradual downhill. The trail transitioned between rocky single track, to rutted tire tracks and then back to smooth packed trail. The vegetation was a mix of shrubs and grasses with a sparse dotting of Ponderosa Pines. Opening and closing cattle gates made for another added obstacle, but also added to the mystique of the area.

I reached the second aid station (12.7 miles) around 1:36, topped off my handheld bottle, ate some watermelon and a pickle, squeezed down a gel, and hit the trail. Things started pitching upward again, and winding single track gave way to a dusty forest road and I relinquished fifth position yet again. After another 1200 ft climb, the legs got a rest with a smooth forest road descent that gradually leveled out en route to aid station three. Unfortunately, I was passed by yet another runner and saw myself slip to seventh place, but I quickly pushed past my rival from earlier on in the day and we all arrived at the third aid station around the same time.

I arrived at check point number three at about 2:32 (19.4 miles). I choked down another gel, a piece of watermelon, and topped of the handheld, and enjoyed the next several miles of smooth undulating trail. It was during this stretch that I saw the first cows of the day, and I continued seeing them for the next seven miles. I kept a few seconds behind fifth place, until he pulled up in pain with a hamstring issue. Then I descended the switchbacks down to a camping area that was buzzing with activity. I imagine that the temperature reached the upper 60s at this point and with the sun out in full force, I was starting to fade.

I passed by a spectator that said a few switchbacks to the aid station, but my body was feeling weak. There was a fairly lengthy stretch through a narrow riparian gully, where a stream may run during some points in the year, prior to the switchbacks. This was my worst part of the race, I was relegated to some hiking and stumbled into the aid station at mile 26.4 in about 3:25 with sixth place hot on my heals. I downed a handheld full of water, topped off with electrolytes and ate another gel before hitting the out/back ridge section. I ran this easy section painfully slow, which likely cost me the sub four hour mark that I was seeking. Following the ridge was a steep descent of Burma Road and the Wolf Trail, which should have been a sub-six minute effort, but with scattering of rocks and an inflamed anterior tibialis muscle, my body could only manage about 7:15 pace.

This descent bears an uncanny resemblance to the finish of Run Rabbit Run 100, which reminded me that even though my pace was not fast, at least I could still run, not just hobble down the hill. I ran around the river and watched four hours pass on my watch. I looked up the short climb and saw fourth place slip beyond my reach. Then with my lack of attention to reality, I almost accidentally took the short cut hill, but quickly realized that I needed to ascend the other trail. I mustered up a short finish kick and crossed the finish line in fifth place with a time of 4:05:38.

Even though I was short of my goal of sub four hours, I was pleased with my effort and thought that it was a great way to move past the horrible memory of my previous race. I ran under control, I was sure to stay well hydrated, and nourished, and I maintained a fairly even effort. My biggest take-aways from the race:

1. Hydration pack can be overkill, and perhaps it makes more sense to use a handheld, where fluid intake can be measured more easily and I am not carrying excess weight for miles and miles. The hydration pack also limits breathability/evaporative cooling, so not having the pack on a hot day could keep me cooler.

2. Perhaps eating too much early on and giving myself a stomach ache later in the race might be worse than not eating enough at all.

3. Focusing on my own race and not worrying about passing or being passed is essential to believe, not just think during the race.

4. No matter how well I know the course and how good the marking is, when I am in the zone, I could almost run off a cliff, constantly reminding myself to check for course markings is needed.

6. Go Beyond Racing puts on an excellent event at Smith Rock and I appreciated all the volunteers.

7. I have an amazing support team with my wife Apryle and my Conure Darwin!