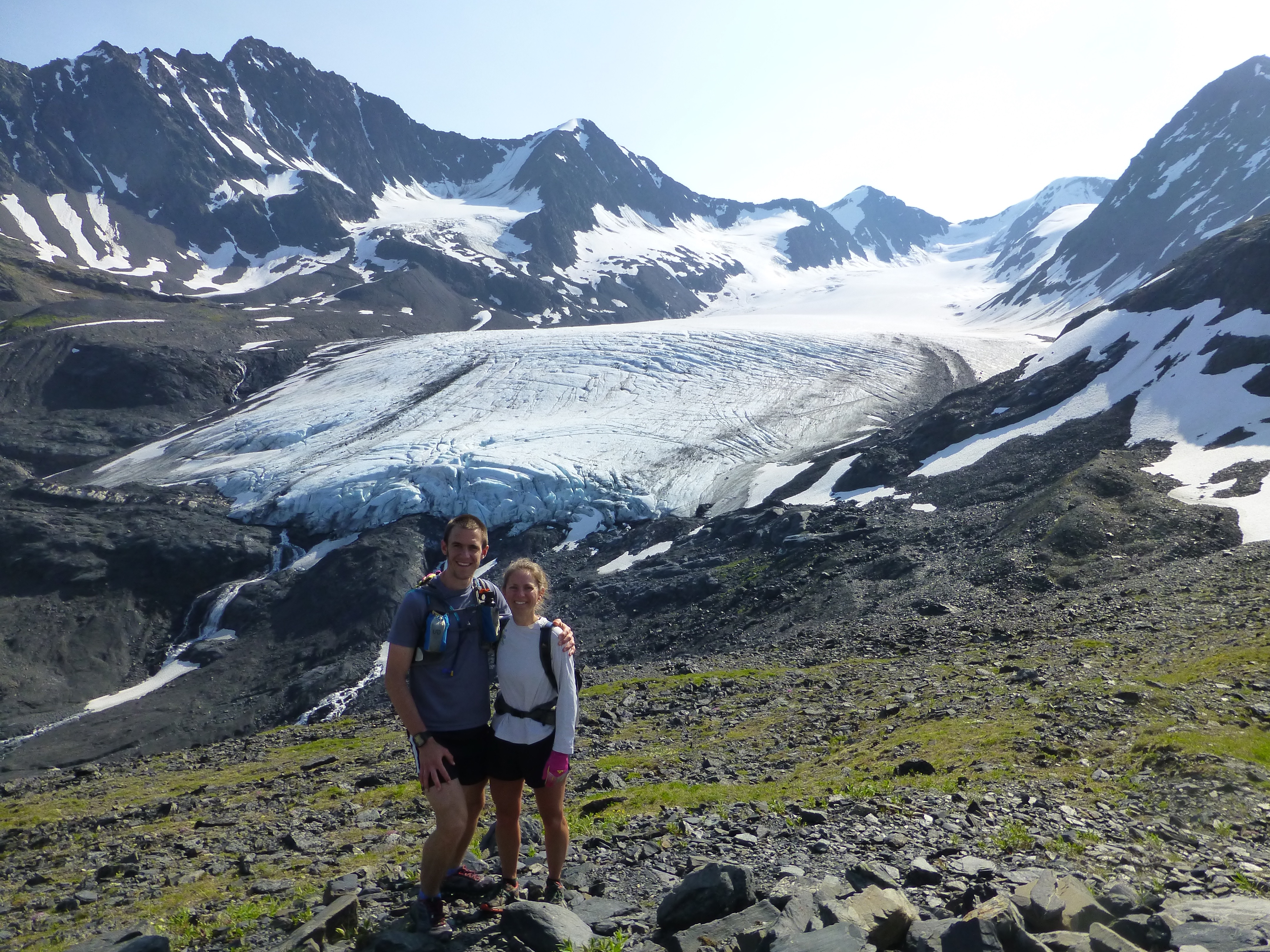 From July 5th to July 15th Apryle and I travelled up to Anchorage, Alaska with her parents. We had four clear objectives: Tour Denali National Park with the intention of seeing as much wildlife as possible, fish as many streams and lakes as possible in a quest to land a monster trout, Traverse the famous Crow Pass, and cruise through Kenai Fjords National Park to see glaciers. In this two part series I will first highlight our Crow Pass Adventure and then summarize our other explorations.

Apryle researched and decided that our centerpiece hike for the Alaska trip would be the Crow Pass Traverse, a 23 mile trail that starts in Alyeska at the Crow Pass TH and ends in Anchorage at the Eagle River Nature Center. The traverse is recognized by many as the most scenic in the Chugach State Park. The trail was once utilized as part of the Iditarod Trail Dogsled race from Seward to Knik. Also gold prospectors utilized Monarch Mine on Upper Crow Creek from 1906 to 1948. Now however, the route is probably best known by the Alaska trail race bearing the same name that started back in 1984.

We set out from our cabin on Florence Lake outside of Willow early in the morning of July 12th. Apryle’s parents dropped us at the trailhead and we told them to expect us at Eagle River Nature Center in 6 hours. We both had a difficult time sleeping the night before, due in large part to our worry over the infamous Brown Bear, Black Bear and Moose which guard the heavily overgrown trail. We made sure to pack our Bear spray, and also brought along 6 Cliff Bars, 700 calories of Tailwind, 3L of water and iodine tablets.

It was a foggy, misty morning along the Turnagain Arm, but the forecast projected a dry and sunny afternoon! The first 4 miles ascended to the alpine, traversing a sparse landscape with low growing vegetation. We caught glimpses of the old mining equipment and expansive scree fields. After a waterfall crossing we arrived in a saddle between towering summits and made our way over to the Raven Glacier viewpoint. After a few minutes of admiring the massive block of ice we made our way across a short snow field and dropped into the dense riparian Birch forest.

The trail was rocky underfoot and the vegetation was nearly shoulder height, making us fearful of startling a mother moose with her young of the year. In this section there were a few short bridges which provided passage over deep narrow chasms with tumbling waterfalls. This overgrown riparian passage way continued for about 6 miles and our paced slowed, making us question how Geoff Roes could run this route so quickly!

The vegetation gave way to a Spruce forest and we saw our first Bear scat as we descended to Eagle River. The river was raging as we caught our first glimpse, but fortunately the trail continued on through a rocky flood plain scattered with Birch and Aspen. We reached the crossing and found a walking stick, then we interlocked arms and started across. The water was frigid and the depth was about mid thigh on Apryle. The crossing totaled about 150ft but had a high point in the middle to rest. It was difficult to find the trail after exiting the river and we began to worry about a run with a bear.

We knew that Eagle River is considered ground zero for Brown Bear encounters and that there had already been a few attacks this year. In fact the Crow Pass Traverse race was cancelled in the wake of bear encounters on the trail. We made sure to periodically yell loudly and I had the bear spray at ready. This made for an extremely stressful and retrospectively humorous next 12 miles.

The pathway remained within 25ft of the river for the next 9 miles and on many occasions was right next to it. There were several bunny hills, some even had wood ladders and fixed ropes for added security, but the terrain was fairly easy. There were a few sections that went through marshy narrow points where we questioned whether we were still on course. Whereas in other places there were durable wooden boardwalks (which Ungulate Biologist Apryle assumed were constructed by the industrious moose). 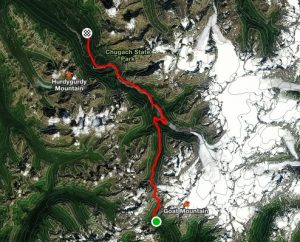 We thought we were sure to see a bear or a moose, on this hike but after we reached the groomed stone path with 3 miles remaining we began to let our guard down. Overall, I think we were both relieved not to have any wildlife run-ins, but it would have been cool to see one in the distance. Apryle and I brought it home strong and hit the Nature Center in about 5 hours and 51 minutes. Overall we were pleased with the traverse, the glacier was spectacular and the alpine section was our favorite part. The river crossing was unlike anything either of us had done before. However, in terms of overall hike quality, I think both of us prefer our forays in the North Cascades, Rockies, and the Olympic Mountains.