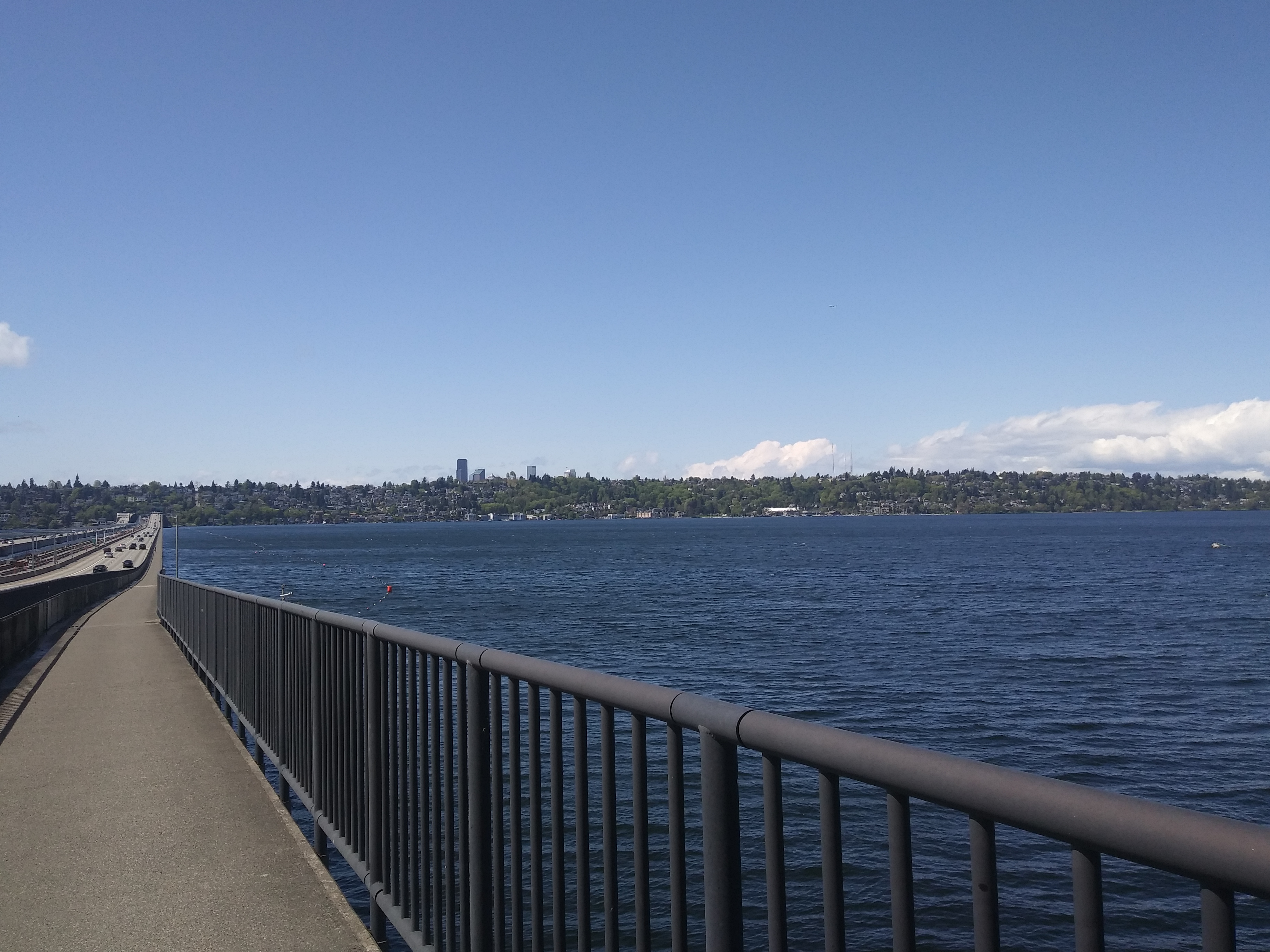 Since moving to Washington I have been interested in linking up the two bridges across Lake Washington in one long run. This is a fairly easy task with no real barriers of any kind, the route is straight-forward, the terrain is flat and paved, and the distance is not excessive. However, it is a run that took me four years to complete and I suppose it was the COVID19 lockdown that provided me with the necessary motivation. If the trail systems were not shut down, I probably would not have sacrificed a long run in the mountains for a long run on the road.

I started the run at 12:47PM on April 25th from a grocery store parking lot in Factoria (Bellevue) and from there I passed under the 405/I90 conglomerate. This section was actually very interesting because the trail passes through the south end of Mercer Slough. Because of this,  there is a juxtaposition of lush green marshland below cold concrete pillars and pavement up above. After passing through the slough, the trail begins to climb up to the East Channel Bridge, which is the portal to Mercer Island. The trail through Mercer Island is bookended by parks and green spaces such as Luther Burbank Park and Aubrey Davis Park.

After a short distance across the north end of Mercer Island, I continued my crossing of Lake Washington via the Homer M. Hadley Memorial Bridge (built in 1989). This is the fifth-longest floating bridge in the world (1772 meters) and it carries westbound I90 traffic. It was named after the man that designed the eastbound I90 bridge (Lacey V. Murrow Memorial Bridge), which is located just to the south and is the second-longest floating bridge in the world at (2020 meters).

It was very cool and a little intimidating crossing such a lengthy bridge. Though the views of the city were very impressive, there was only a minimal barrier between pedestrians and traffic which made me feel a little uneasy. I made it across to the East Portal and I turned to the north and continued down Lake Washington Boulevard South. I passed through the surprisingly wooded Frink and Leschi Parks and was quite tempted to hop on the trails instead of continuing on the road. Soon after breaking free of the tree cover I found myself running along a pleasant beachfront called Madrona Park, which offered unobstructed views of the Bellevue skyline and glimpse of the southbound portion of my journey ahead.

I mistakenly took McGilvra Boulevard instead of continuing on Lake Washington Boulevard East, and therefore had to correct my trajectory along East Madison Street in order to reach the Washington Park Arboretum. It had been a long time since I had been in the arboretum and it was a pleasant change to the pavement. I ran through the Pacific Connections Garden to the Rhododendron Glen and then over to the Woodland Garden. After passing by the Oak Family, I ran over the wooden bridge onto Foster Island. This was certainly not the fastest choice to get onto the 520 bridge, because I essentially ran right underneath it, but it was scenic.

I continued on my trip down memory lane, by passing over the floating bridges to Marsh Island, which was under about a foot of water. I hopped through the shoe sucking mud and finally reached dry land at East Montlake Park, where I was able to take the 520 onramp. This was the northern terminus of my loop and it was time to say goodbye to Seattle and start my second crossing of Lake Washington.

The 520 bridge is also referred to as the Evergreen Point Floating Bridge and it carries State Route 520 traffic in both directions. It is the longest floating bridge in he world at 2350 meters in length! It is also the widest in the world, measuring 35 meters, which allowed for a much wider pedestrian path. The bridge (completed in April of 2016) is an impressive engineering feat and consists of a roadway deck set atop 77 concrete floating pontoons that are secured by 58 anchors on the bottom of Lake Washington. The tall concrete barrier between automobile traffic and pedestrian traffic was nice in regards to safety, but it also created a wind tunnel on the bridge. Debris flew into my eyes and the warm wind threatened to push me back to Seattle, but I eventually made it to Bellevue.

Upon reaching the eastside I immediately turned southward and passed through one of the most affluent neighborhoods in Bellevue, Medina. I started to feel fatigued as I passed through the interior streets of Bellevue. I had not brought water and took only a few gels and the temperatures were much warmer than I anticipated. The day looked rainy and overcast, but was actually warm and sunny for the entire run. As I ran down Bellevue Way SE, I was diverted due to a construction detour. As a result I had to do some quick navigation and made my way over to the east side of Mercer Slough Nature Park. I continued south along the paved trail that parallels 118th Avenue SE.

I enjoyed the greenery that Mercer Slough provided to finish out the run, it was a pleasant change to the city streets of Bellevue. On another positive note, I ran into my friend Stephane Frion who accompanied me for the final 2 miles of the journey. We passed under 405 and I returned to the parking lot where Apryle was waiting for me to finish. I collapsed into the car and realized how out-of-ultra shape I was. I was happy to finish the loop and lucky to have gotten such amazing weather, but was certainly upset with myself for not bringing water. It is amazing how much it hinders performance in the latter stretches of a run and how much it slows recovery following the run. Nonetheless, mission accomplished.