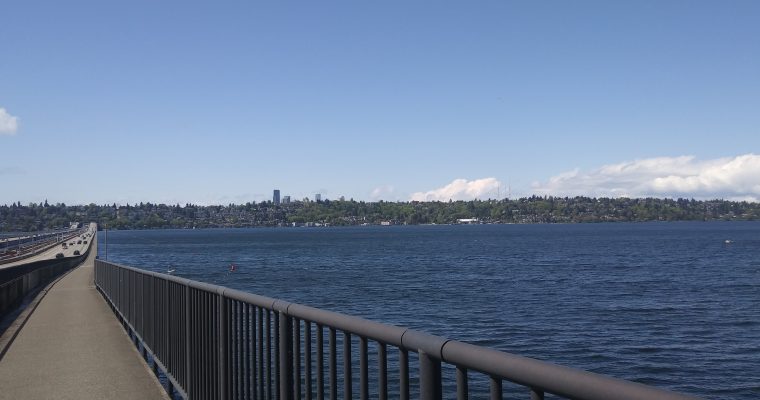 Since moving to Washington I have been interested in linking up the two bridges across Lake Washington in one long run. This is a fairly easy task with no real barriers of any kind, the route is straight-forward, the terrain is flat and paved, and …

After the Nueces 50 miler I took my time building my mileage back up and focused the majority of my time and energy on finishing up my fifth and most challenging semester of physical therapy school. I spent three weeks after the race doing some …

On August 20th, I finished up my Neuroscience final in the morning; correctly answering 96% of the questions. This brought to a close my third semester of Physical Therapy school. To celebrate I hit the trails for one last ten miler in Austin before departing to Spokane, Washington. I ran my favorite route, which is a gravel path that skirts along Slaughter Lane and RM 1826. Post run I departed for the northwestern reaches of the country via a Boeing 747. Apryle greeted me at the airport and we departed in her 2001 Ford Windstar for a city campsite in Odessa, Washington.

Apryle showed excellent craftsmanship with her makeshift camping van. The van was complete with a comfortable raised cot in the back. The bed frame hinged and lifted to allow for storage underneath. The design maximized the use of space allowing for both comfort and practicality. As a final touch, the van also included some owl print curtains.

Hiked the Stafford Creek Trail and most of the way up the Navaho Peak Trail and where we enjoyed some great views of the Stuart Range.

The overall distance was 26 kilometers

Camped in the tent along Stafford Creek

Toured the University of Washington Campus

Drove to Anacortes and paddled/waded in the Pacific Ocean

Walked over to the Ferry Landing in Anacortes

Ferried over to Orcas Island

Ferried back to Anacortes

Drove into the North Cascades NP

2:20 to the summit and about 4 hours overall

Rode out a storm in the lookout tower

Hiked to the Sahale Glacier camp; saw two or three black bears; even one swimming in Doubtful Lake

Camped in the tent at the Johannesburg campsite again.

Walked back along Steattle Creek and Diablo with Apryle

Camped in the tent at Gorge Campground

Every trail had several raspberries, salmonberries, blackberries and blueberries, but this trail had overwhelming amount of berries.

Camped in the tent at Gorge Campground again

Hiked the Maple Loop: 17 kilometers (Tangents to Ann and Rainy Lake, as well as a brief scramble toward Frisco Peak)

Walked around downtown Wintrop; got a waffle cone and had dinner

Hiked to Cutthroat Pass near the Pacific Crest Trail

17.7 kilometers: Hiked/Ran to the top and Ran back to the van.

Traveled to Winthrop and toured the town historical museum

Had dinner in Twisp

Walked around the downtown area and checked out the Ranger Station

Drove over to Ferry Lake

Camped in the van off the road near Ferry Lake

Drove to the downtown Republic camp/picnic area and made some breakfast, did some drawing and relaxed.

Ran to the Golden Tiger Trail off 21;

10.5 kilometer warm up and headed down to high school track and did a quick workout

1.6 kilometer cool down run back to the downtown camp

Had some dinner and some ice-cream

Drove out to 2156/300 junction and attempted to find the wolf call camp; hiked 4.5 miles in the dark but were unsuccessful in finding the camp

Camped in the tent off the road

Had some dinner, Margaritas and watched Rocky I

Organized Apryle’s van and prepared to depart for Austin

Unpacked and prepared to start my forth semester classes on the fourth of September.