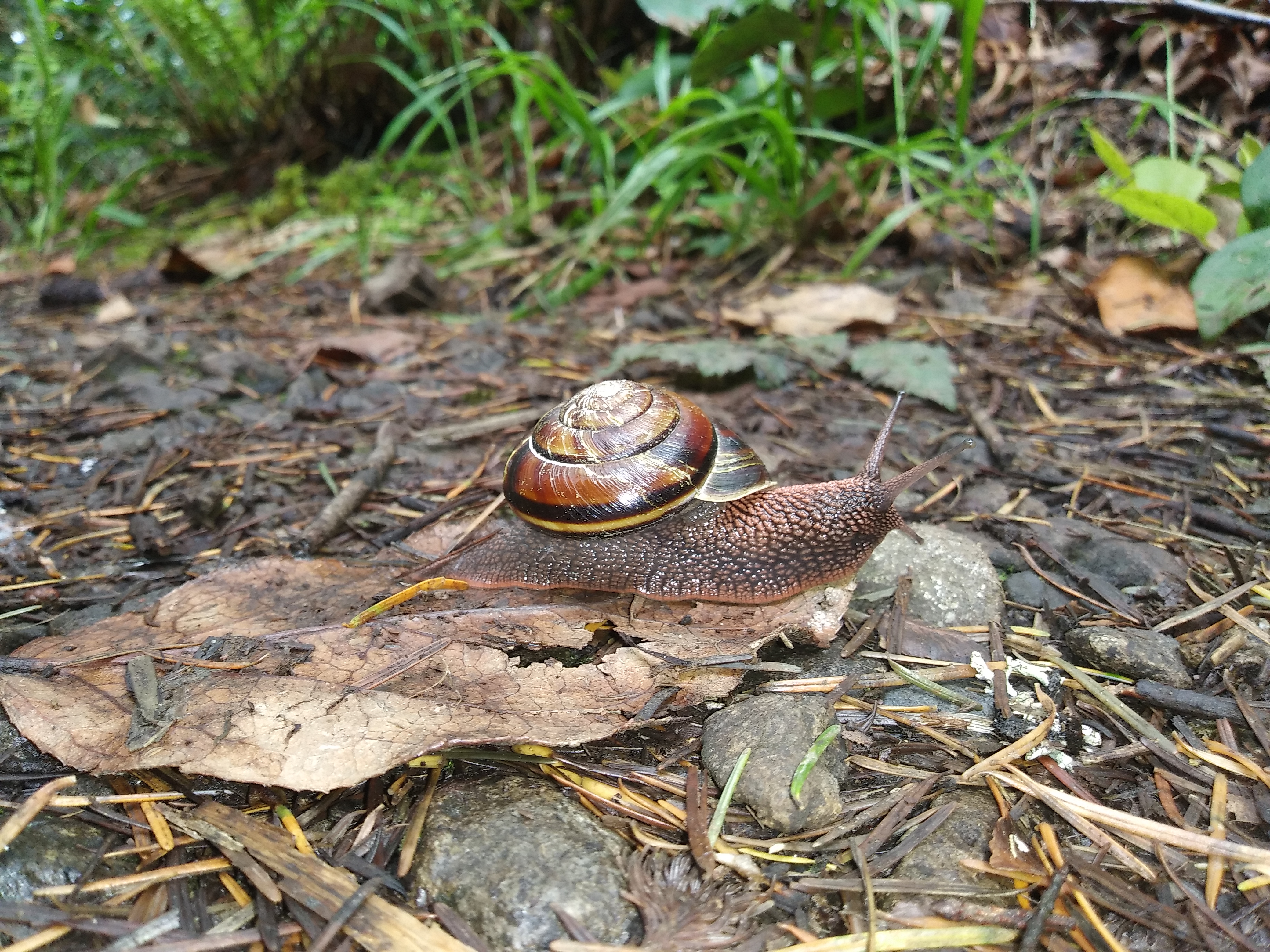 Since I was a child I have always been fascinated by animals with shells. I was always on the lookout for box turtles in the woods, painted turtles in ponds, and snails in the garden. Fortunately for our garden, but unfortunately for me, I never found any snails growing up in Ohio. It was not until my adulthood moving to a different region that I ever actually saw terrestrial snails in any abundance. The Pacific Northwest snail concentration took it to a new level, and I found myself just as intrigued with the creatures in my adulthood.

In the first part of this series I highlighted the charismatic gastropods referred to as slugs, so in this post I will review their relatives – snails. Because soil in the Issy Alps tends to be acidic, forming a shell of calcium carbinate is difficult, therefore, slugs are much more common than snails. However, there are still plenty of snails both native and invasive.

The two major native snails are Monadenia fidelis 0r Pacific Sideband (Red Snail) and Allogona townsendiana or Oregon Forestsnail (White Snail). The Pacific Sideband is a beautiful snail and is endemic to the wooded areas of the Pacific Coast of North America from southern Alaska to northern California. This snail is a terrestrial pulmonate that reaches a width of 22 to 36 cm, making it Washington’s largest land snail. The Oregon Forestsnail is a terrestrial pulomnate that is endemic to the Pacific Northwest and is an endangered species in British Columbia. It prefers moist soil with broadleaf canopy with stinging nettle in the understory. It may come as a surprise, but this snail has a slow dispersal rate, which makes it a vulnerable species.

Unfortunately there are a fair amount of non-native snails that typically feed on gardens and out-compete native snails. These snails have been introduced from Europe for purposes of escargot such as the Vineyard Snail (Cernuella virgate), Brown Garden Snail (Cornu aspersum), and Banded Garden Snail (Cepaea nemoralis).  Many snails get transported around the country via plant nurseries, which are one of the worst contributors to the spread of invasive snails. There are also snails that are aggressive and will kill native snails such as the Robust Lancetooth (Haplotrema vancouverense) which has raspy teeth on its tongue and will take other snails out of their shells.

Snail populations may continue to increase in the Pacific Northwest despite the less hospitable acidic soil due to the changing weather patterns and more frequent dry spells. Snails can handle drier weather better than slugs because of their ability to retract into their shells. Additionally, they are more equipped to handle the mild winters, so without extreme cold snaps, larger populations of snails are surviving. Despite my enjoyment of all snails, I will only help the native snails off the trail, and though I will not kill the invasive snails, I will not help them off the trail. I try to limit my meddling in nature to assisting the native snails and slugs avoid a painful crushing death.