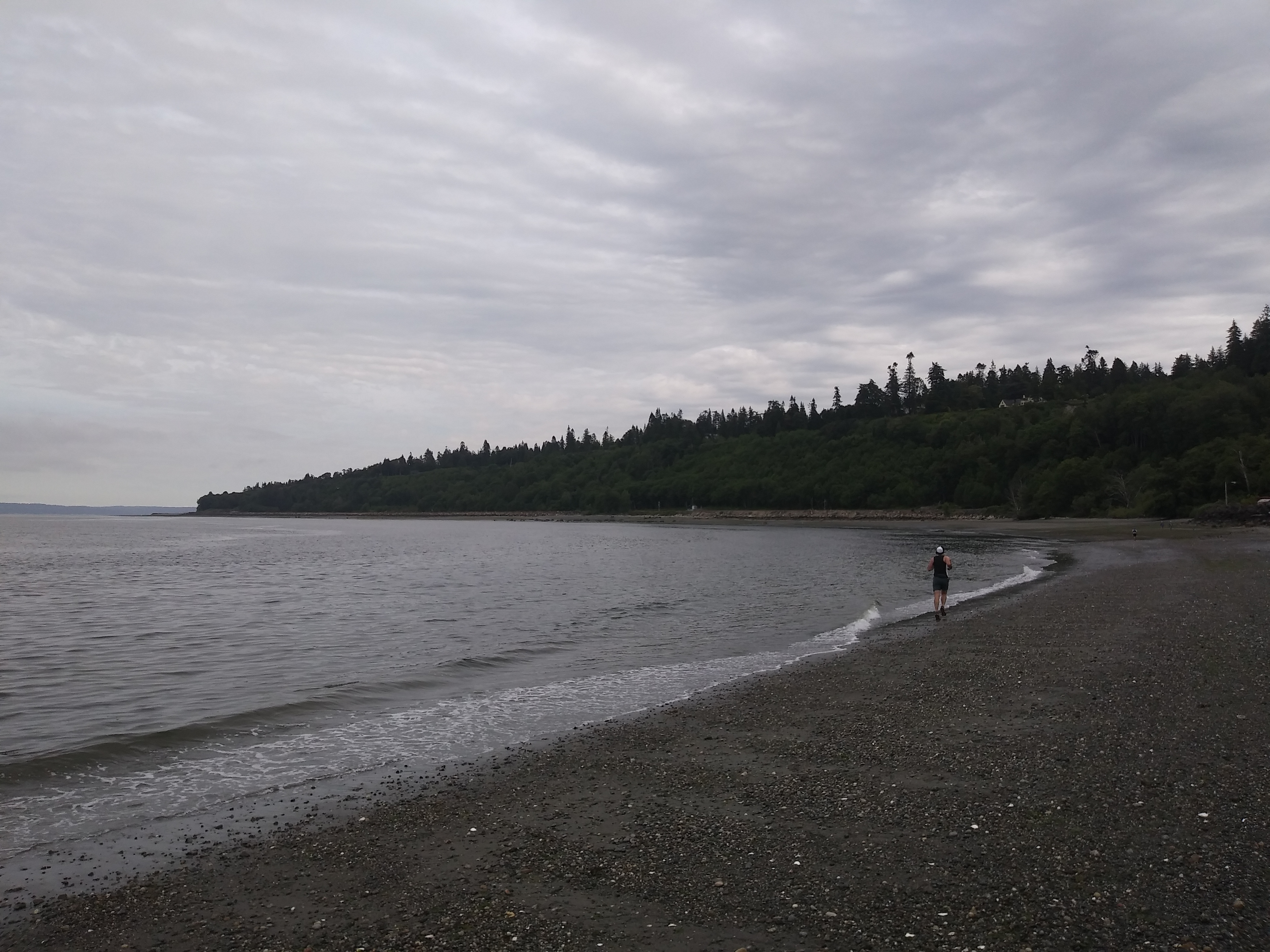 On Monday, June 1st, Adam Braddock informed me that he, Abram Elwell, and Tim Shillair intended to run from Seattle to Everett on the beach during low tide on Friday, June 5th. I was aware of this route after Abram Elwell pioneered the adventure back on June 15th, 2018. After discussing whether it fit the schedule with Apryle, I decided to join in for the run. I was not certain what everyone’s plans were, but I assumed we would run as a group and finish up in around 4 hours. I arrived at Golden Gardens Park in Seattle a little before 9 AM and Apryle dropped me off near the bathhouse. We got underway at 9:03 AM.

The conditions were favorable for a near perfect day of running: temperatures were in the mid 50s, humidity was around 70%, and the skies were partly cloudy. Most importantly for the run however, was that the tide was -3 feet at 11:45 AM, meaning that a stretch of beach that is typically under water, was exposed and open for passage.

The only rule for the route is that you must stay west of the railroad tracks. The run is almost all on the beach except for a short road stretch in Edmonds and Mukilteo near the ferries. Additionally, the last mile is on a paved trail to the Pigeon Creek Trailhead in Everett. As Abram describes, “the challenge of the route is twofold: limited route existence due to tides and the ever-changing terrain of sand, sharp or slippery rocks, and some boulders.”

We started off in a group of four and quickly separated as it appeared Adam was making a claim for the FKT. Abram and I decided to take the pace conservative for the first ten miles, while Tim split the difference, forming the first Adam chase pack. I enjoyed running with Abram, as it had been since the Gulch Countdown in January that we had run together. He also provided valuable beta about the route and upcoming sections. It was reminiscent of our Olympic Coast FKT run last summer.

I was very surprised at what a remote feel the route had despite being on the coast of Seattle. The initial miles were a mix sandy runable beach and ankle breaking rock-strewn shoreline. The rocks were covered in slippery algae, which added another element of difficulty. As we ran northbound from Golden Gardens we passed North Beach, and then Carkeek Park around mile two. Carkeek has an impressive network of forested trails despite being in the middle of Seattle, but its beachfront is fairly limited.

The next landmarks were blasts from the past: Boeing Creek Park (mile 4.7), Innis Arden (mile 5.2), and Richmond Beach (mile 5.8). I used to run the trails and corresponding beachfronts of those parks when I lived in Shoreline in 2016. Around mile 7.2 we passed under some boardwalks at Point Wells, an area that is only accessible a few times a year. It is interesting how visible this landmark was at the starting point at Golden Gardens over seven miles away.

After passing by Point Wells, we ran along the base of the bluffs of Woodway, which is a very affluent neighborhood north of Shoreline. At mile nine we reached Dog Beach in Edmonds and from there we jumped on the road and took Admiral Way passed the ferry terminal. Abram stopped to refill water near Brackets Landing and I decided to chase down Adam who was out of sight at this point.

So at mile ten at Sunset Beach I started to push the pace with a goal of reaching Adam prior to Mukilteo ferry terminal. It was a daunting task because I was not sure how far in front Adam was and I knew that I could not relent on my pace. The next ten miles were very interesting because at one point I would be running on a sandbar and the next I was trudging through knee-deep water. There was a fair amount of wildlife in this section as well: clams squirting water into the air, anemones receding to avoid desiccation, sea stars clinging to rocks, and Blue Herons fishing in the tide pools.

At this stage I would occasionally see Adam’s footprints in the sand and try to match or exceed the stride. I also tried my best to take tangents and look out for the easiest terrain. The landscape was ever-changing as I bridged the gap between public beaches and places that were typically under water. The halfway point was marked by Haines Wharf Park, a large structure that I ran under briefly. Finally at about 15.5 miles into the run and 5.5 miles into the chase I caught my first glimpse of Adam at Picnic Point Park. From there it was just a matter of gritting the teeth and closing the gap.

At mile 16.4 I passed the Pacific Queen shipwreck, which is actually a minesweeper built in the 1800s that was intentionally brought to the location in order to salvage metal (not a wreck). I was warned to steer clear of the ship due to annoyed landowners and also found the far west path was more straightforward anyway. At mile 18.5 I bridged the gap to Adam and we decided to run together to the finish in Everett. The beach turned into a shallow tide pool with slippery rocks underfoot shortly after I caught Adam. He also pointed out the neighborhood along Naketa Beach Walk, which is inaccessible by road but has the perks of solitude and unique architecture.

At mile 20.3 we reached the Mukilteo Lighthouse Park and then jumped on the road to bypass the ferry terminal. Then we passed along the familiar train terminal that marks the western terminus of the Japanese Gulch. We passed under a shipping station at mile 21.4 and resumed beach running (2.1 miles cumulative non-beach running). The fatigue began setting in as the easy road running ceased and the difficult rocky beach running restarted. We passed Harborview Park (mile 23.3) and Howarth Park (mile 23.9) and then at Oyster Point Beach (mile 24.6). Finally, we hit a paved trail that indicated the last mile of our journey. We passed by a very unappealing shipping yard that was probably the least aesthetic portion of the run. After 3 hours and 32 minutes and 43 seconds of running we reached the Pigeon Creek Trailhead in Everett, ticking off a total of 25.5 miles.

It was quite a day at the beach and Adam and I were very happy with the FKT on the route. I consumed about 400 calories of tailwind and about one liter of water. I was most proud of bridging such a substantial gap to Adam in order to finish out the run together in a new FKT. Tim Shillair finished next with a time of 3:58, followed by an impressive kick by Abram to finish in a time of 4:15, bettering his former FKT time by over 44 minutes.

However, the adventure continued while Apryle was driving everyone home Abram started feeling worse and worse. His face, arms, and legs went numb. Although we joked it was Apryle’s driving, it was clearly much more serious. Upon arriving at Tim’s house, we laid Abram on the sidewalk and he was unable to move and he began to slur his speech. Fortunately, Adam is a former ER nurse and administered a makeshift IV (1L saline). After about 30 minutes his condition improved and he was up and walking. It was an interesting conclusion to a very memorable day! So relieved that Abram made such a solid recovery. Thanks to Abram for plotting the route and sharing some miles. Thanks to Adam and Tim for sharing some miles. Finally, thanks to Apryle for shuttling me for the run!