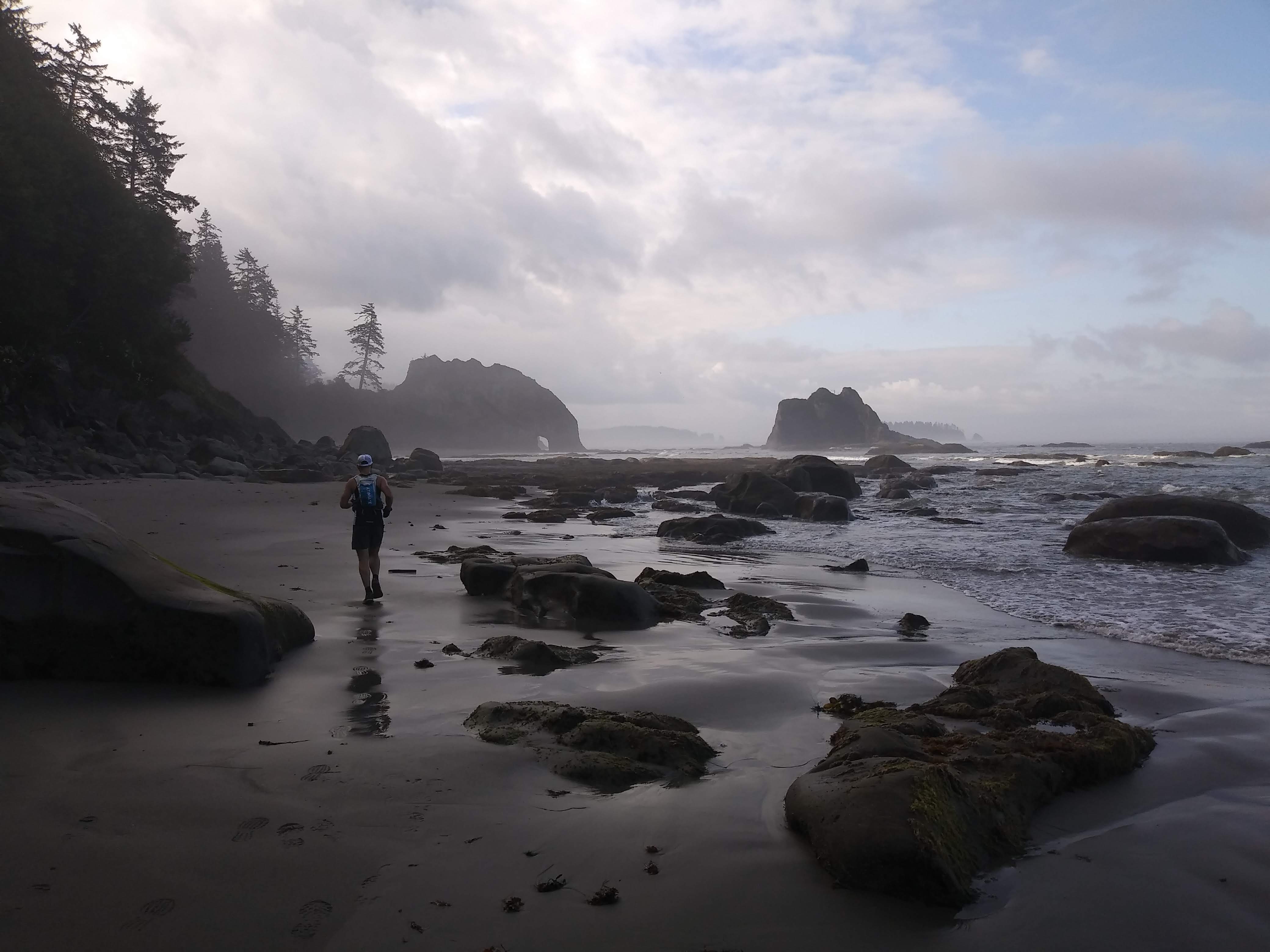 The alarms sounded after a few hours of restless tossing and turning. We gingerly tiptoed around the hotel room to avoid waking the two sleeping parrots that would undoubtedly squawk their good mornings. We departed our hotel in Sekiu into dark, drizzly, and ominous evening and took the winding road to the Shi Shi Beach trailhead. We waved our goodbyes to Apryle and glanced at our watches in order to begin the run at midnight (July 27th).

I was fighting off the car sickness and trying to regulate my body temperature in response to the combination of cold, incessant rain which was punctuating an otherwise warm summer evening. The trail down to the beach was as I remembered from a few years earlier, muddy and wet with a few short stretches of slick wood boardwalks. The dense forest trapping the moisture in the air made for a humid start, which in addition to the salty sea breeze set the theme for the morning.

Once we reached the beach, our headlamps did little to light the path before us. The constant rainfall and heavy fog rendered navigation attempts futile. We pushed onward into the abyss before us, utilizing the lapping waves to our right to help guide our path. Our first major obstacle was Point of the Arches; fortunately prior to this, Abram found that if we held our headlamps and pointed them at the ground, we could see much more clearly.

We reached our first pinch point, Point of the Arches (5 miles) in about 1 hour and we navigated our way over slick sharp rocks and traversed some densely vegetated overland trails. This was easily the most difficult section of the entire run, it was dark, foggy, rainy and, the terrain was technical. Among these treacherous rocks also marked our first wildlife encounter in the form of a raccoon finding its meal in the tide pools. It took roughly 1.5 hours to cover that 2.5 mile stretch before we returned to runnable sandy shores. Fortunately the subsequent 3 miles to the Ozette River crossing were smooth sailing and we made it to the river crossing in about 3 hours and 5 minutes and at this point the rain had let up and the fog dissipated.

Both the river and tide was low, so it was quite easy to hop across the miniature delta into familiar territory: Cape Alava/Sand Point shoreline. This stretch of coast was my first taste of the wild Washington waterfront which I first explored with Apryle back in March of 2015. This beach is a mix of sand and small rocks that make forward progression a difficult proposition. The wave-battered downed trees added a fun obstacle just in case one is actually able to find a good rhythm. Perhaps one of the most historically special experiences of the traverse is the petroglyphs (known as Wedding Rocks) that are carved into the rocks about 14 miles into our run and we were lucky enough to spot them with the head lamps without even searching!

We reached Sand Point (15.8 miles) about 4 hours and 30 minutes and were greeted with two glowing eyes in the form of a deer on top of a sea stack. It is always odd to see a large ungulate on those steep grassy rocks jutting out from the water, it seems so removed from their typical habitat. Moving along we arrived at the unmistakable Yellow Banks (18 miles) in about 5 hours. Our surroundings were finally visible without a headlamp on the Yellow Banks and I thoroughly enjoyed the secluded nature of this small swath of sand, bookended by tree covered rocky heads, along with ocean to the west and forested cliffs to our east. Not soon after Yellow Banks beach we began the slow rock hopping stretch of trail that lasted for for about 5 miles. We reached Kayostla Beach (23.2) about 6 hours and 30 minutes into our run and the slow rocky terrain was replaced with runnable sand and spectacular views of sea stacks and rock formations. This was a pleasant surprise as we were expecting a longer stretch of slow moving terrain.

The foggy, drizzly dark morning was in the distant past and replaced with clear sunny skies as we clicked off some of our quickest miles of the run. Kayostla Beach also marked our most unique wildlife sighting, a medium-sized mammal with a sleek brown body and a long pointed tail. We identified this animal as a River Otter which was running along the sand and eventually dove into the lapping waves of the ocean. It is not unheard of for River Otters to enter the ocean, and extremely unlikely for a Sea Otter to come onto land. The little otter showed as much curiosity in us as we did in it and it studied us as we passed along down the trail. The fast sandy beach came to an abrupt end once we reached our second pinch point: Cape Johnson (28.7 miles). Abram’s goal was to reach this pivotal check point by 7:30AM in order to leverage the tide, and we arrived around 7 hours and 41 minutes into the run and passed with no difficulty.

After clearing Cape Johnson the terrain continued to pose obstacles in the form of rocky beaches, and the unique Hole in the Wall formation. We were barely able to pass through the formation due to rising tides but I felt as though going through the hole was a rite of passage in the route we were taking. After passing through Hole in the Wall we entered Rialto Beach and had a fast stretch of running while we psyched ourselves up for the Quillayute River crossing. Here Apryle was spectating with Bella and Darwin as Abram and I passed by and made our way to the rivers edge (33.8 miles; 9 hours and 20 minutes). She was a little concerned that we were behind pace, but we reassured her that we had completed the slower section of the route.

We tightened everything down, and tried to protect our electronics. I elected for a freestyle swim while Abram employed a side stroke. The water was a pleasant cool temperature, and quite refreshing; however, I was surprised with how difficult the 600 foot swim was and my upper body was even more sore than my lower body following the first wave of swimming. We reached a narrow sandbar in the middle of the river and then waded across the second half of the river. After reaching the second island we had to make one final swim across a narrow deep channel before reaching solid ground. We were ecstatic to pull off the swim portion and elated to know that the most difficult sections of the run were behind us.

Once we arrived in La Push we ran our way up to a dock with hoses to rinse out the debris from our shoes and refill water. This was only my first water refill, meaning I consumed about 2L of H2O and probably about 1500 calories of tailwind, cliff bars, and gu gels in the first 34.7 miles. The whole crossing endeavor (including water refill and shoe clean up) took us about 35 minutes. Feeling rejuvenated, we ran out of town and uphill along 110. It took me awhile to warm back up after the crossing and I was shaking due to the reduced body temperature, but by the time we reached the Third Beach trailhead I was warmed back up.

The 2.5 mile stretch of road was the only real boring part of the run and we reached the Third Beach trailhead (37.2 miles), 10 hours and 21 minutes beginning the southern portion of our route. The Third Beach trail was the easiest running of the day, groomed, wide and mostly downhill. Third Beach had the greatest concentration of people we had seen all day, but the beach section was short lived before we took another overland trail. Even though I loved the change from my typical mountain running, I still most enjoyed the overland trails. I found it extremely cool to climb up the steep cliff sides with the rope and small footholds. Despite the fact that I am very afraid of heights and steep climbs I do enjoy stepping out of my comfort zone.

Most of the overland trails were densely forested, with vegetation reclaiming a narrow trail that snaked its way around the top of a bluff and that is my favorite running style. The Taylor Point Overland trail gave way to more flat runnable beach from mile 40 to 44.5. We reached Toleak Point (43.5 miles) in 11 hours and 53 minutes which put us under previous record pace. It was around this point where Abram and I were calculating and miscalculating distances and times, which we eventually sorted out prior to the Hoh Head overland crossing.

The stretch of running to the Goodman Creek overland trail (44.5) felt like all business, we were getting a little tired and trying to focus in on the goal. This trail was quite pretty as we run along and crossed the meandering stream a few times before descending back onto the beach. The next 3.5 miles were fast and easy, but Abram’s phone battery was waning and we knew that we needed to be vigilant to locate the Hoh Head overland trail. Luckily it was pretty easy to spot and we started our last overland climb at mile 48.3 after 13 hours of forward progression.

The Hoh Head trail was steep, densely vegetated, and unrelenting in its difficulty at this stage in the run. The temperatures were climbing and I was beginning to drain my hydration bladder much more quickly. The trail meandered through the upland forest for 3.3 miles and finally descended a steep nearly vertical wood plank ladder back to the beach at 51.6 miles (14 hours 13 minutes). At this point I had put away another 700 calories and finished out another 2L of H2O. Upon reaching the sunbaked waterfront we had a short stretch of runnable shoreline before reaching the final pinch point of Diamond Rock (52.2) at 14 hours and 20 minutes.

The Diamond Rock head had very grippy rocks and was easier to traverse than the other pinch points and in no time we were back on runnable sand. Abram moved across the rocks more quickly and I had to turn up the pace once I got back on the sand to catch back up. The trail in to Oil City is marked by a large accumulation of logs flanking the Hoh River and the trail is difficult to make out. We knew that we were going to set the current FKT but we wanted to break 15 hours, so there was no time to let up on the pace and celebrate. We were able to locate the hidden pathway and throw down a fast pace through the forested trail to the parking lot and our finishing point. Our official finish time was 14 hours 52 minutes and 28 seconds for a total of 54.28 miles and 6800 vertical feet.

It was a pleasure to share the trail with Abram for the 54 mile journey and I greatly appreciate the meticulous planning of the tides and river crossing that made it possible for us to complete this ambitious point-to-point. Additionally, I am also indebted, as always, to my supportive wife Apryle that dropped us off at the Shi Shi Beach TH and picked us up again at Oil City TH while simultaneously caring for two parrots! In my mind, this run will forever be regarded as one of the most challenging and rewarding adventures to date, and I am so grateful that this wild coastline is protected from development by the National Park Service. Because of the foresight of many before me, the planning by Abram, and the supportiveness of my wife Apryle I was able to enjoy this beautiful route! Thank you.