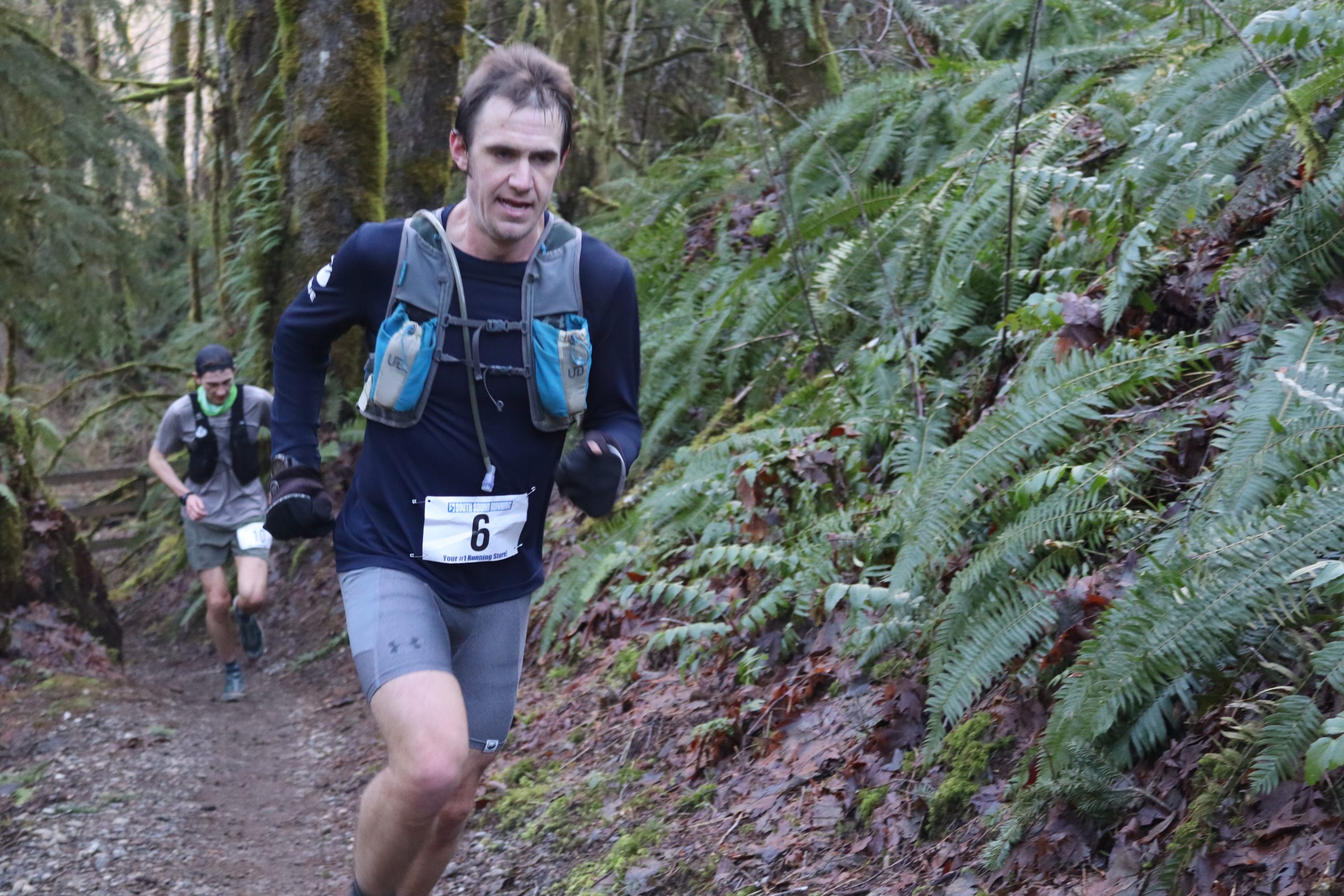 I started off the year with two semilocal 50K races in order to start increasing my long run distance and get myself warmed up for longer distance races of the spring. I like to have a balanced mix of big “A” races and also some lower key “B” races. It is also important to me to change it up and run races that I have not tried yet.

Since I had already competed in the Captiol Peak 50 miler, I decided it would be fun to run the 50K distance with a different course this year. Therefore, for the first race of 2022, I signed up for Capitol Peak Mega Fatass 50K. The race was to feature an out and back course to Capitol Peak, however, due to snow levels the course was switched to two 25K out and backs. I was a little disappointed but thought it would still be an aesthetic racecourse. It basically consisted of two small loops near the start/finish and an out and back to the midway point.

The race got underway at 8:00AM on January 22nd and it was a cool (mid 30s) partly cloudy day. Apryle and I had arrived in the dark hours of the morning and slept a little in the car prior to the start at Magaret McKenny Trailhead. The opening miles were mostly on a gravel forest road (E9500), which gave way to the dirt single-track (campground trail), and eventually funneled onto the McKenny trail. For most of the opening miles I enjoyed the company of Mack Robertson and Will Rice. We set a good tempo and I was happy with the time splits we were hitting. Despite a continual uphill push and slick mud on the trail surface nearing the Sherman Creek turn around we covered the first 8.1 miles in 1:03:03.

We then turned around and made our way back to the start/finish area which was just a straight shot back to the campground on the McKenny trail (completing the loop with the campground trail that we used in the opening miles). The temperatures stayed cool and I managed to stay on my feet over the slick mud on the McKenny trail. I finished up the first lap with our pack of three in 2:00:41 (15.0 miles). This meant that we split our first inbound lap in 57:38. We stayed together for the next 2.3 miles until I started to pull away on the climb out of the campground at mile 17.3 (2 hours and 18 minutes into the race). I was not expecting to distance Mack and Will, but when I looked back it did not appear that they were going to chase me down.

I pressed on solo and reached the Sherman Creek turn around in 3:04:41 (22.9 miles), this meant that I ran my second outbound in a time of 1:04:00 as compared to a 1:03:03 in my first outbound journey. As I made my way back toward McKenny campground, I passed Mack and Will, who appeared to be behind about 3 to 5 minutes. I did not feel comfortable with that amount of time for a lead, so I tried to increase my tempo.

As the hours ticked by and the day progressed, the sun began to break free of the clouds and temperatures began to warm slightly. However, it was still a pleasant cool temperature to run. Although I was pushing the pace, I tried to be present and soak in my beautiful surroundings. Capitol Peak State Forest is a working forest, and therefore, it is in varying degrees of growth. Eight unique miles of course offered an accurate cross section of the patchwork quilt that is Capitol Peak State Forest.

Near the start/finish area the trail passed through older second growth forest with well-established trails that featured impressive wooden bridges over roaring creeks. However, as the course continued further into the park, the trail crossed logging roads with large treeless swaths that harbored young trees that topped out at shoulder height. The course then dove back into second growth forest with punchy climbs as trail drew closer to Sherman Creek.

As I reentered the second growth forest near the finish area, I focused intently on being sure I took the right trail into the finish. I closed out the race hard and stopped the clock at 4:02:52, good enough for first place. I had not negative split, but I was close, my second lap was 2:02:11, compared to my first lap time of 2:00:41. It is also worth noting that my second inbound time was 58:09, compared with my first inbound time of 57:38. This means I lost more time on the second outbound trip than my second inbound trip.

Thanks to the race directors and volunteers at the event and as always, thanks to Apryle for being there to cheer me on throughout the race. 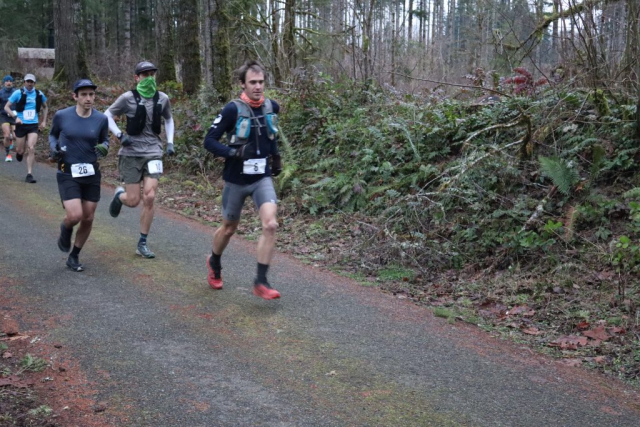 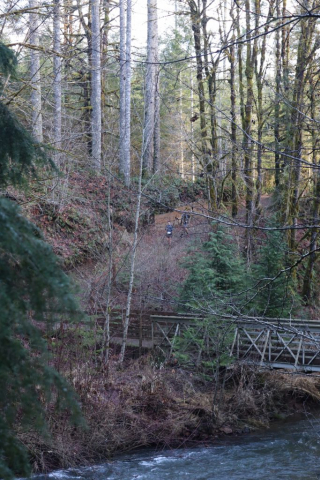 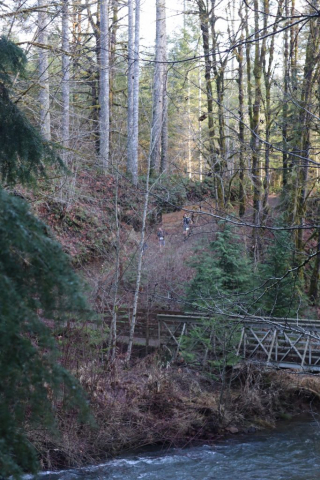 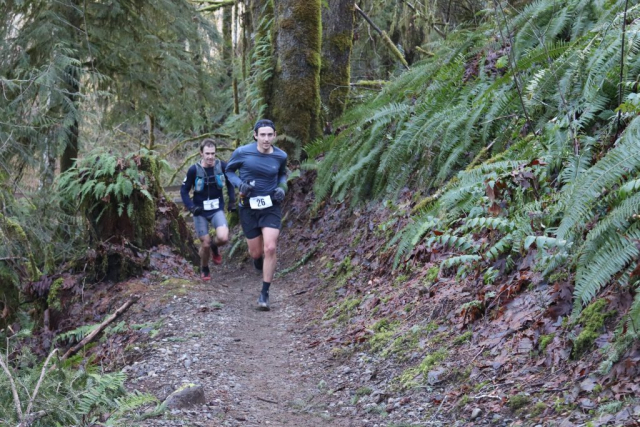 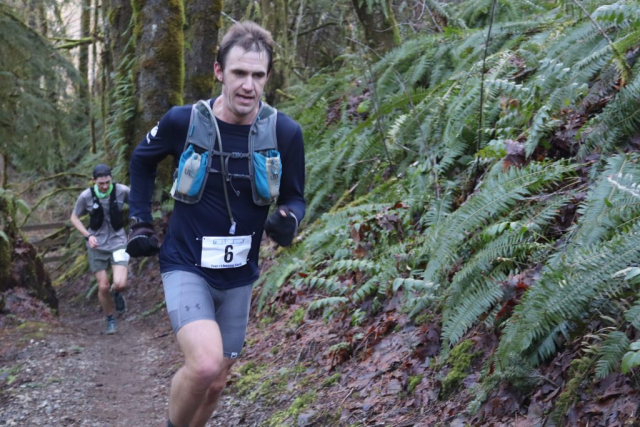 With regards to Lord Hill 50K, I was a long time runner, but first time racer. Lord Hill State Park is situated along highway 520 near Monroe, Washington in Snohomish County. I often ran at this park when I worked a home health region along highway 2 from Monroe to Skykomish. However, it had been a few years since I had run at the park because I do not often find myself in Snohomish County anymore. At any rate, I was very familiar with the layout of the park and the many trails within the boundaries.

In my mind most defining feature of Lord Hill is the short but steep pipeline hill that runs through the middle of the park and that is exactly where the course started. We got things underway at 8:00AM and I kept the pace controlled. It was a cloudy morning and there was frost and ice clinging to the grasses and shrubs along the trail. All of the puddles had a thin veneer of ice and there was a biting chill in the air. These were the perfect conditions for a race, freezing when you are stationary, but comfortable when you are moving. The race started from the lower parking area near the Snohomish River and this was actually the first time I had ever started a run from this trailhead. I typically ran from the Northwest park entrance, so it was a nice change of pace.

I found myself with another duo of excellent runners in this 50K, Ben Rauk and Bill Johnson (who was running the 20 miler). I knew of Ben from other Japanese Gulch runners and it was great to finally share some miles with him. Almost immediately upon leaving the parking area, we were climbing the steep pipeline hill, which gradually gave way to a more reasonable singletrack trail that entered the woods to the right. All the turns were tight and there were roots trying to trip us all over the trail, which made finding a rhythm difficult. However, Ben and I managed to hold down a decent pace as we covered the first lap in 1:21:02 (9 miles).

The course was well designed, with the first .5 miles on the pipeline hill, followed by a right onto Loren’s Ridge, and a left on to Marsh Lake Loop trail just after the first mile. After only .4 miles on Marsh Lake the course took a left onto Temple Pond Connector as the trail passed by Temple Pond. At mile 2 the course turned onto Temple Pond Loop followed by a right turn onto Red Barn trail at mile 2.5. The Red Barn trail was the longest stretch of trail as it passed by Beaver Lake en route to Easy 8 trail at mile 3.3.

These trails flanked the northeast edge of park and the course veered left back into the park with the transition back onto the Pipeline trail at the northern terminus of the park. At mile 3.8 the course merged onto Beaver Lake trail and then to the boardwalks. After passing over the boardwalks the course reached the first aid station situated a top a small hill at the NW trailhead at mile 4.5. The course then doubled back over the boardwalks and onto the Midway trail; which continued for 1.4 miles before reaching the Main trail and Meat Cutter trail. The sharp descent of the narrow Meat Cutter trail emptied us out at the wide gravel River trail at mile 6.6. The River trail climbed to a junction with Redline trail, which narrowed and continued upwards.

At mile 7.5 the course turned onto the Midway Footpath, which I found to be the most difficult trail on the course. Although the trail lost 550 feet, it was over very overgrown terrain with many low branches and tripping hazards. From the Midway Footpath, the trail transitioned onto a gravel forest road (mile 8.4) back to the start/finish area (mile 9). The course then proceeded to repeat this pattern two more times.

The second lap was uneventful; we ran into some other runners and had to be a little more nimble in order to pass without trampling vegetation or tripping. The ice over the puddles began to melt and the trail was much sloppier due to the concentration of foot traffic and warming temperatures. Ben and I managed to reach the start/finish area in a time of 2:45:29 (17.9 miles). This meant that we covered our second lap in 1:24:27 or 3:25 slower than our first lap.

In the final big climb at the start of the last lap, I pulled away from Ben and tried to increase the tempo in order to try to negative split the last lap. I ran nearly the entire loop solo, only seeing Ben at the short out and back section at the northwest entrance trailhead. The hardest part of the final loop was definitely the last two miles, which snaked through a densely forested and vegetated hillside. The trail was extremely narrow, muddy, and overgrown with several stream crossings. When looking at a course profile, this section of the course would appear fast, but in practicality, it was a crawl.

I managed to cross the finish line in 4:09:38 (26.94 miles) for my second win of the year. I covered the final lap in 1:24:09, 18 seconds faster than my second lap but still 3:07 slower than my first lap. I waited to cheer Ben across the finish line and then I had to get back to Issaquah in order to make it to work for the afternoon. Overall it was an excellent race, the course highlighted the entire park with little repeat, the weather was perfect – cool with overcast skies, and the aid stations were well stocked. Thank you to the race director and all the volunteers for an excellent race. 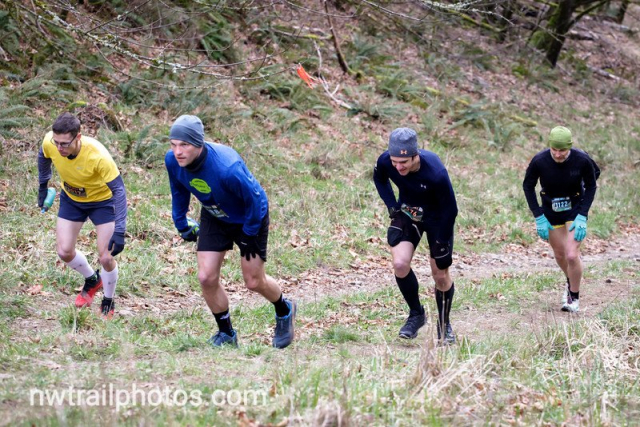 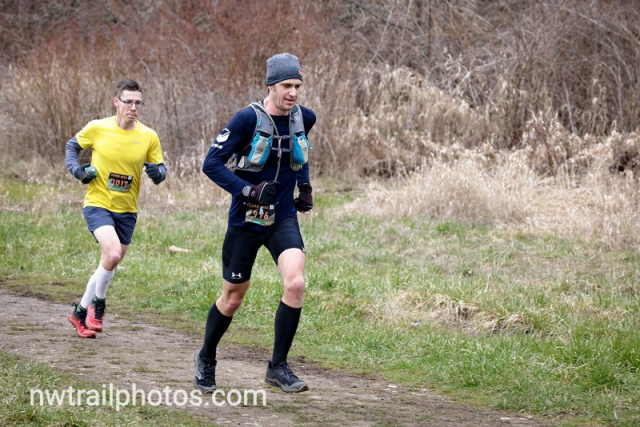 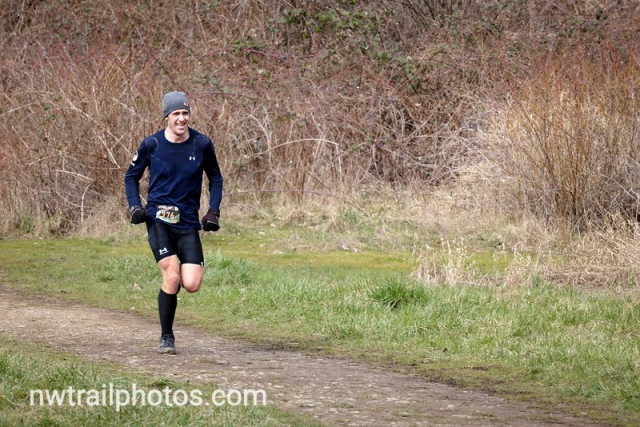 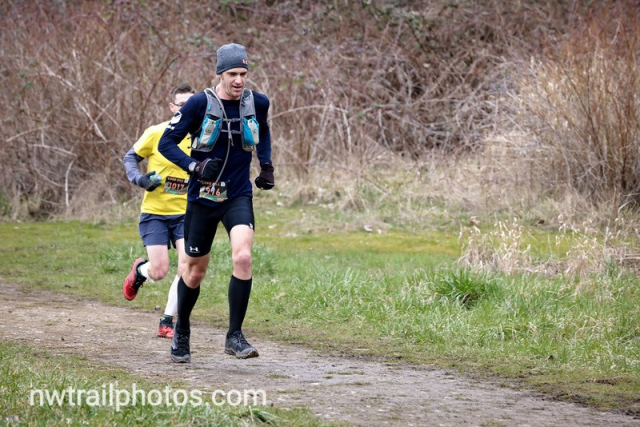 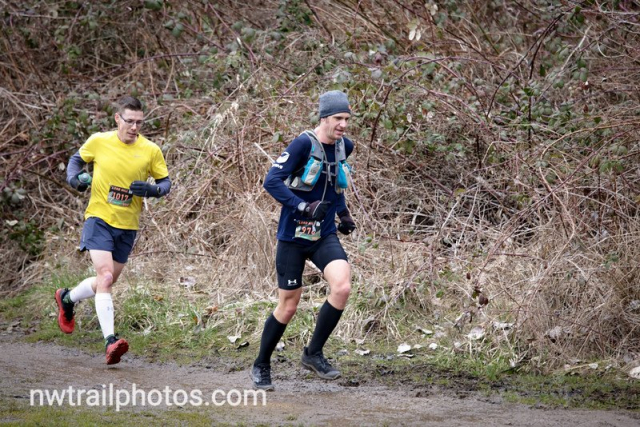 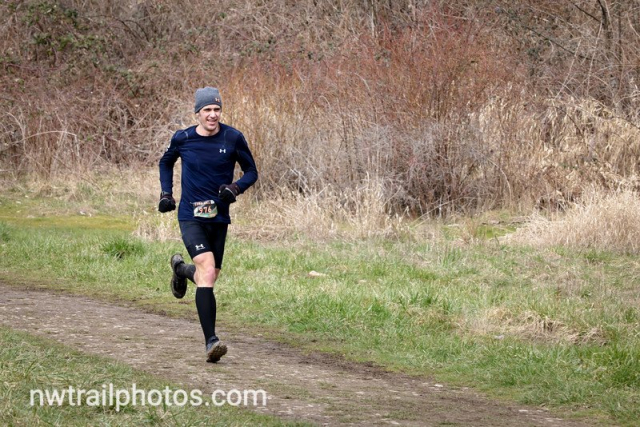 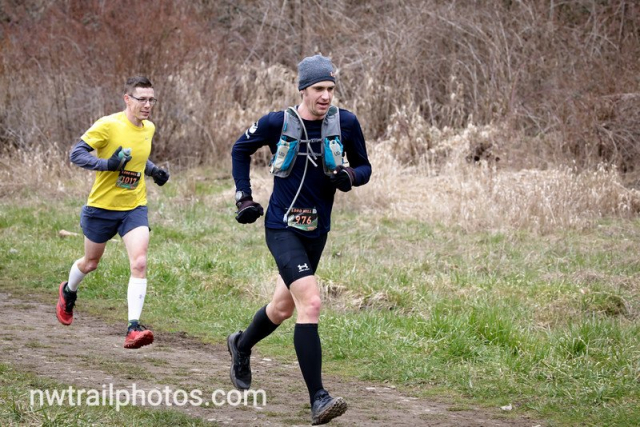 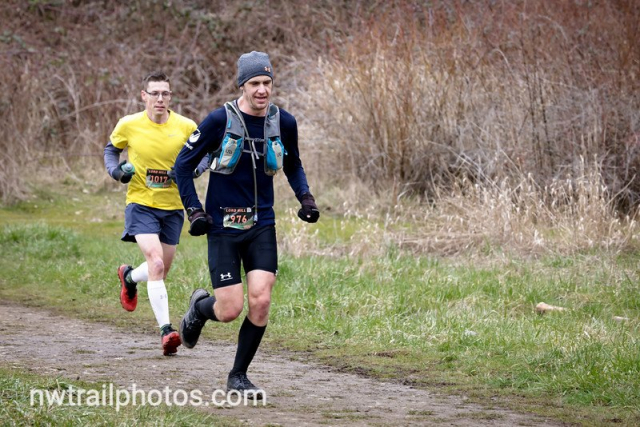 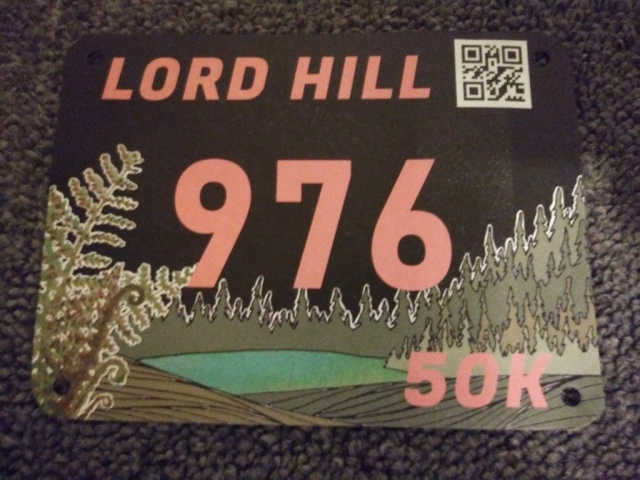 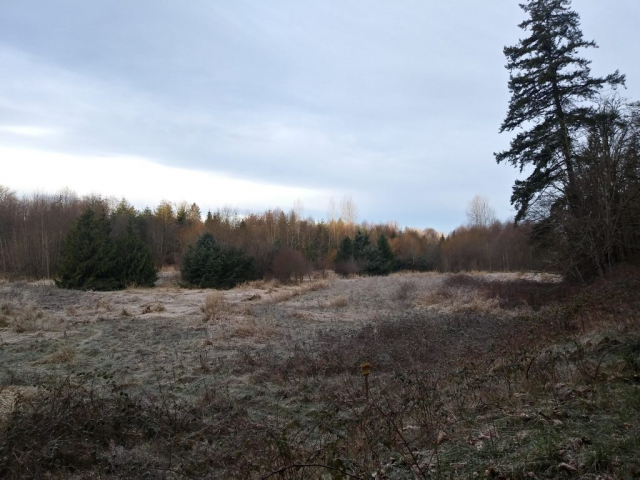 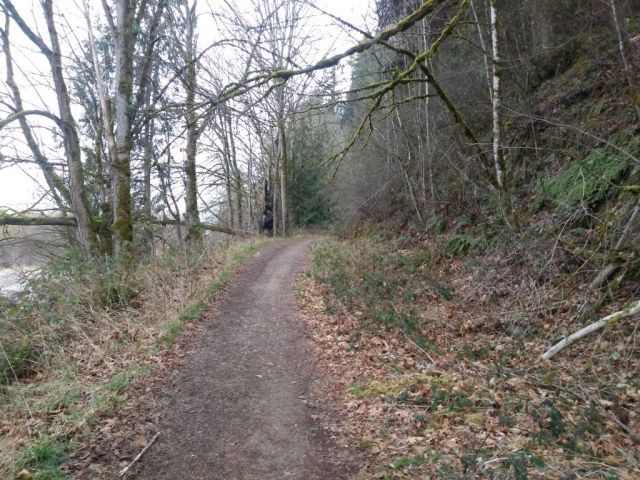 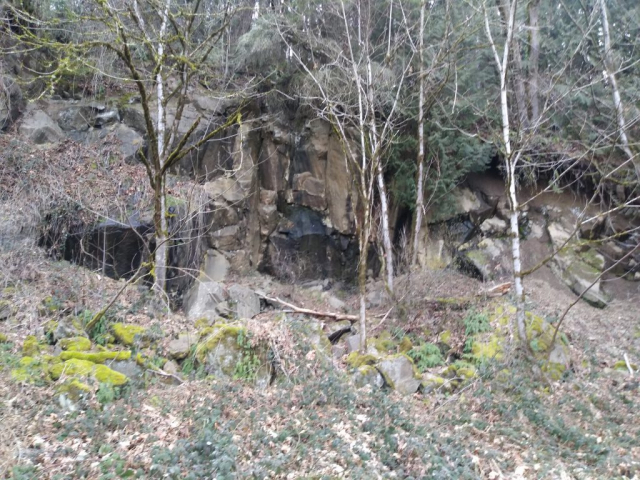 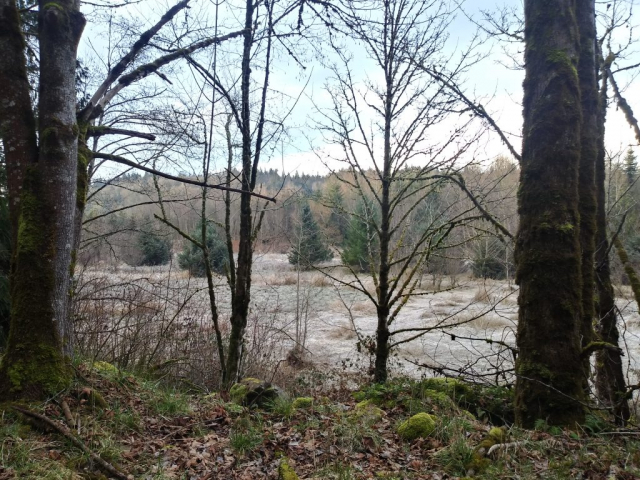 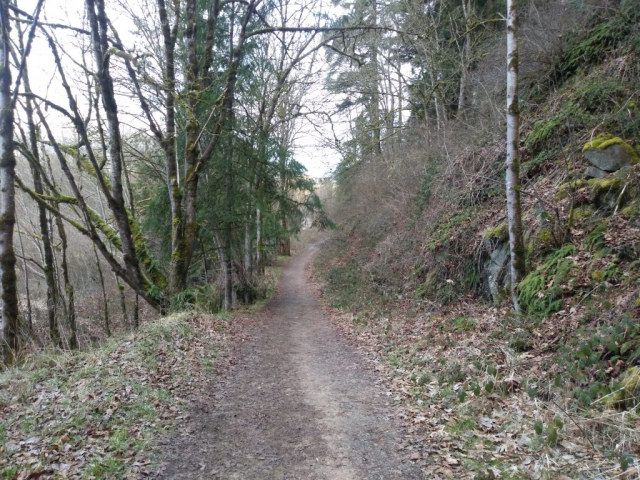