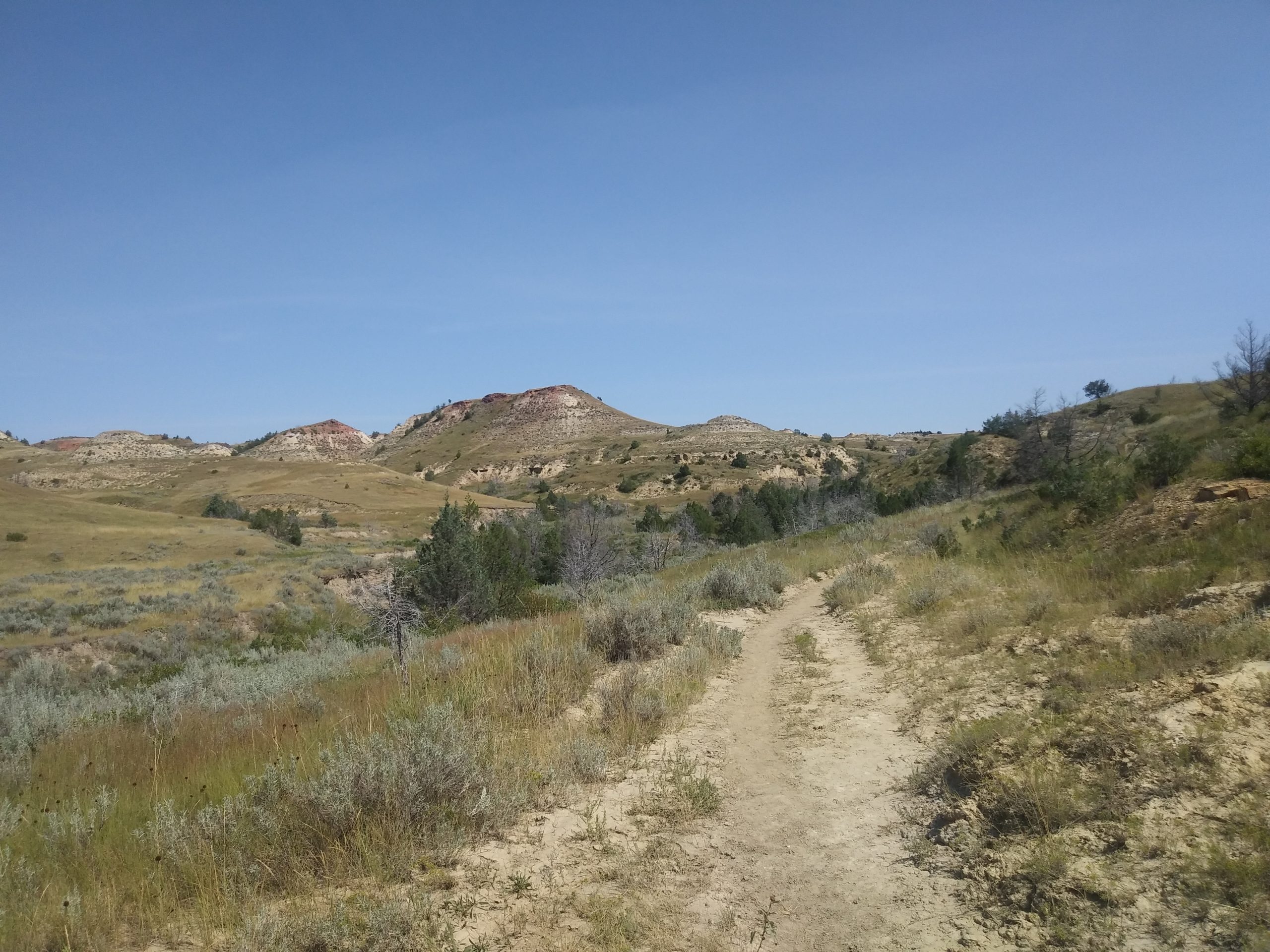 On August 21st 2022, I visited Theodore Roosevelt National Park for the second time in my life. I previously visited the park on a cross country road trip (visiting Ohio from Washington) on December 15th 2017. This time the pretense was the same, I was on the second day into a road trip helping my dad move from Ohio to Washington. The first time we visited we stoped at the Painted Canyon entrance and I did a quick out and back run, so this time we ventured further interior. I did a little research and tried to pick a route that I could finish in less than 90 minutes (in order to keep on our strict time schedule of 2400 miles in 3 days). As it turns out I found a very interesting 11.7 mile loop that also happened to be an established FKT route.

So after departing Fargo, North Dakota in the early morning, dad and I reached Medora shortly before noon. The town was very festive and fit the landscape perfectly and the park entrance was right on the other side of the downtown area. Interestingly enough the road into the park actually crosses over I90 and passes by several Prairie Dog towns. As we climbed further into the park we were fortunate enough to spot a couple small herds of American Bison. This was dad’s first time seeing Bison, which is always a very special experience.

We continued past Cottonwood and parked at Peaceful Valley Ranch where I consulted the map one final time and hit the trail in pursuit of the FKT. It was in the mid 80s but decided against taking any water or food because of the short distance. So I darted through Peaceful Valley Ranch, passing by horse stables until I reached the narrow overgrown Jones Creek trail. This trail paralleled the loop road and passed through sagebrush and grasses and with each turn I hoped I would not stumble upon any Bison. I crossed the road at mile 1 (6:18) and then continued east along the dry Jones creek bed out of the Little Missouri basin.

The trail was fairly mild and passed through undulating sagebrush steppe as it gradually ascended. There were excellent views of the iconic badlands formations. The trail occasionally passed steeply through the Jones Creek bed on footpaths that were clearly frequented by Bison. I reached the Lower Talkington trail in 3.5 miles (22:53). The temperatures began to rise as the sun was burning through the sky and even though I was only a third of the way through the run I was already wishing I had water. The Lower Talkington trail was probably the steepest and also the highest (2490 feet) portion of the course.

I reached the Talkington trail at mile 5.3 (34:55) after a sharp descent off the plateau. The Talkington trail began to parallel the loop road from mile 6.5 to mile 6.9. I then merged onto the Lower Paddock Creek trail at mile 7.1 (47:57) and managed to lose my way momentarily after passing through a dry creek bed. The braided Bison trails made route finding difficult, even with the frequent trail markers. Fortunately the remainder of the Lower Paddock Creek trail was easy to see far into the distance and had very little encroaching vegetation. I passed through an adorable little Prairie Dog town that were alarmed by my surprise visit. They warned their friends and scurried into their burrows as I passed through their domain.

As I looked ahead my worst fear about this route was going to come to fruition, there was a herd of several hundred Bison spanning the entire plain from the Paddock Creek valley up to the nearby hillside. There was no way that I could avoid passing through them unless I turned back. So I decided to drop into the creek bed to avoid the first group, but several more darted up from the valley, so I jumped back onto the high ground. I made plenty of noise to advertise my presence and the cows and calves ran away, however, some of the bulls stood their ground making a low growling noise. I kept as much distance as I possibly could but I was right against a steep sloping cliffside. I knew I could jump and slide if needed, but I hoped it would not come to that. I know that I was far too close compared to the recommended distance, but I really had little choice due to the herds positioning.

After 3 minutes of slow walking I made it past the herd and as soon as I got a safe distance away, I sprinted to the loop road. I realize that Bison are one of the most dangerous animals to encounter in the American west and perhaps the smartest decision would have been to just turn around, but in the heat of the moment I pressed forward and I believe that I was very lucky that I made it through unscathed. I think that making my presence known and trying to stay out of sight helped immensely.

When I reached the Halliday Well Road (mile 10.7 1:14:45) I heard some rustling in the bushes along the road and was worried that I spooked some more Bison, but nothing emerged from the vegetation so I continued my sprint pace. At mile 11.1 (1:17:10) I reached the pavement and turned up the pace in order to make it back to the trailhead in under 83 minutes. Once I hit Peaceful Valley Ranch Road I saw Dad’s truck and kicked it in to stop the clock at 1:20:14. I was greeted by Dad and the little pug/yorkie mix Gidget. Overall it was a beautiful route and the shortest FKT I completed to date. I quickly dried off and changed before we piled back into the truck to continue the road trip.

I find the Dakotas to be one of the most intriguing places in the United States due to the stark landscape punctuated by the badlands formations along with the iconic symbol of the Great Plains – American Bison. Paleontologist surmise that the Bison originated in Southern Asia during the Pliocene Epoch and crossed into present day North America via the natural land bridge. At their peak, the American Bison herds topped out over 60 million. As an avid hunter, Theodore Roosevelt recognized the importance of preserving the Bison herd and without his and others efforts, the majestic Bison may have gone extinct. In 1894, federal legislation was enacted to protect the Bison, with a $1000 fine or imprisonment for killing one of the animals. At that time there was only a small herd in Yellowstone National Park and a few owned by private individuals left in the United States.

In 1956, the park imported 29 Bison from Fort Niobrara National Wildlife Refuge and were released on the south unit (46000 acres). The 29 animals increased to 145, and then subsequently 20 were relocated to the north unit (24000 acres). Today the park managers have set the herd size at 200-400 animals for the south unit and 100-300 for the north unit. I feel very fortunate to be able to see Bison on the plains considering our miserable species dropped the numbers to less than 300 by the end of the twentieth century. We are very lucky that a few individuals recognized a bigger picture beyond their own desires and stood against the majority who would take unchecked until nothing more remained.

In addition to Bison, the two units are home to Prairie Dogs, Elk, Mule and White-tailed Deer, Wild Horses, Pronghorns, Coyotes, Bobcats, Beavers, Porcupines, Badgers, Prairie Rattlesnakes, Bullsnakes, Golden Eagles and many other bird species. The prairie sustains over 500 species of plants, most notably the drought resistant grasses that appear to be a monoculture at first glance but actually consist of many different species such as Western Wheatgrass, Needle-and-thread Grass, and Little Bluestem, among others. In the absence of fire, Sagebrush and Wild Rose occupy the soil and provide less valuable forage. The annual grasses play an instrumental role in the balance of the ecosystem and therefore, fire is a natural and important aspect of life on the Great Plains.

In select areas there are forests in the park and they are typically Rocky Mountain Juniper Woodlands and Hardwood Forests. The Rocky Mountain Juniper Woodlands are most common because they thrive in the microclimates created by the north facing buttes. The less intense heat from the sun and slower evaporation of water allows the juniper to thrive and they in turn reduce erosion, provide resting places for Elk, and food for Solitaires, Waxwings, and Robins. In the riverbeds, hardwood forests consisting of Green Ash, American Elm, Box Elder, and Cottonwoods grow in addition to large shrubs which provide habitat for White-tailed Deer and Porcupines.

Perhaps the most interesting thing about Theodore Roosevelt National Park is the unique geology. The formation of the badlands began in the Paleocene Epoch. While the Rocky Mountains were forming in the west (with the help of water and wind), sediment was being formed. Ancient Rivers carried the sediments (silt, mud, and sand) into the present day Dakotas and creating the layers of the present day Badlands features. In addition to the sediment from the mountains, ash from volcanos in Montana, South Dakota, and Idaho was accumulating in the rivers. These ash layers became bentonite clay. Then in the following epochs rivers eroded the landscape and carved valleys through the landscape en route to the Hudson Bay in Canada. However, in the Pleistocene Epoch the southward advance glaciers stopped the northern flow of the rivers and they were forced to change course to empty into the Mississippi River. This caused the creation of many new channels and sliced through the sedimentary rock layers which is the reason for the current look of the Badlands.

Whether you are intrigued by geology and the stark beauty of the Dakotas, or enjoy wildlife viewing, or simply want to do a side hike on a cross country trip, I highly recommend Theodore Roosevelt National Park. There is something for everyone and it is important to stop and think about the importance of preserving our natural world so that future generations may also enjoy this landscape. Similar to the foresight of Theodore Roosevelt and many others, we must always think about what is most sustainable and best for our collective future, from prairie dog-to-juniper-to-human, because ultimately we are all connected.