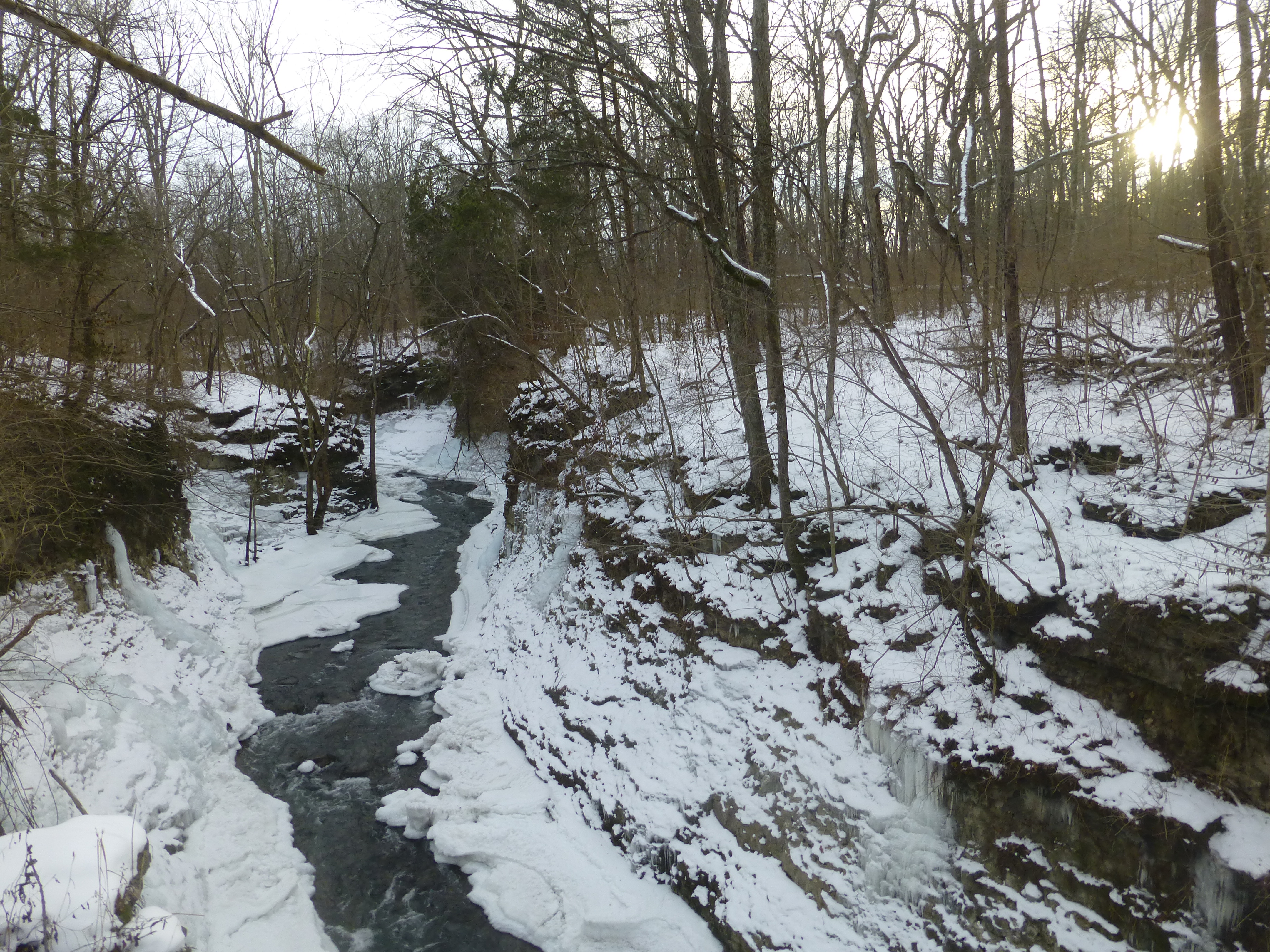 Near the start of 2018 I made a trip down to Yellow Springs Ohio to visit my friend Jay Smithberger. Jay and I first met at the 2012 Leadville 100, when we were in rough condition at the Fish Hatchery Aid Station. At any rate Jay took me on a running tour of the trails around his home and I was so impressed that I thought I should put together a post describing the area.

There are three separate areas that make up the trail network, and they include: Clifton Gorge State Nature Preserve, Glen Helen, and John Bryan State Park. Each of these regions have a unique history, but on the trail they blend seamlessly.

Clifton Gorge Nature Preserve was dedicated in 1970 and contains 269 acres of the best post-glacial erosion in the state of Ohio. Specifically, the gorge was carved as a result of a large meltwater river originating from the receding Wisconsinan Glacier. The now extinct river flowed over the Silurian Bedrock escarpment, dissolving the soft limestone and shale beneath it. This resulted in the undermining of the Silurian dolomite, which created the deep gorge.

From the trail, the varying rock layers forming the gorge walls are pronounced. These layers tell a story of different rocks ability to resist erosion. The Cedarville dolomite is durable and forms the 50 foot upper cliff, but the less resistant dolomites below form interesting recesses, and also lead to collapsing slump blocks of Cedarville dolomite punctuating the lower slope which is made up of easily eroded shale. The Little Miami River utilizes the gorge for its current course, but appears to be widening the chasm, not deepening it.

In addition to the geologic interest of the gorge, there are also many uncommon plants, such as the state threatened Red Baneberry and Wall Rue. Additionally, a Chinquapin Oak forest lines the shale slope along with Eastern Hemlock and the cliff dwelling White Cedar. Overall, the gorge is one of the most impressive sights I have witnessed in Ohio.

In 1896 the land for this state park was donated by businessman John Bryan, who was interested in preserving the area. The park totals 752 acres and is essentially a continuation of the gorge and Little Miami River. There is a maze of trails webbing the north side of the park as well as a series of trails bookending the Little Miami River, complete with wooden bridges to facilitate crossing. The dominant trees are Maple and Oak with a healthy population of Sycamore and Cottonwood.

Bordering John Bryan State Park to the west is Glen Helen, the largest preserve of the trio, encompassing over 1000 acres. Glen Helen was donated by Antioch College alumnus Hugh Taylor Birch in 1929. There are over 20 miles of trail and Antioch College manages the land and coordinates educational programs. The inherent beauty of the area is magnified by the 400 year old trees, limestone cliffs, waterfalls, and the namesake of the neighboring town: The Yellow Springs. The glen is also home to a Hopewell Indian Mound, Pompey’s Pillar, a covered bridge, and a grotto. Also on the grounds of the glen is a Raptor facility which takes in various birds of prey, that due to unfortunate circumstances would be unable to survive in the wild.

After only spending a few hours and 20 miles on the trail, I feel that Yellow Springs and the Little Miami has created a lasting impression on my memory. It is certainly an area that necessitates future visits due to the numerous geologic wonders as well as overall beauty. I appreciate Jay taking the time to show me around such a special slice of the Ohio landscape.