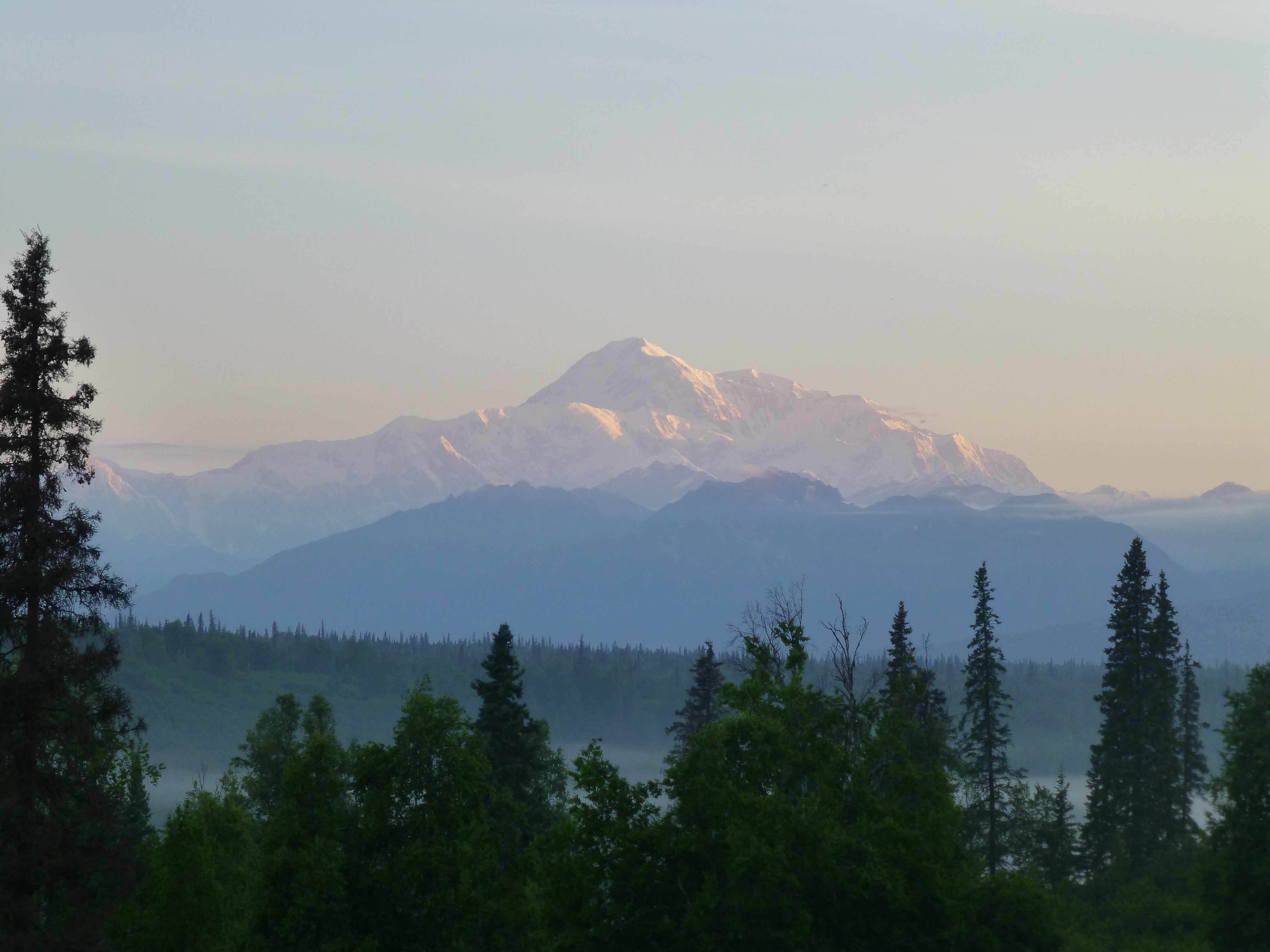 A year and a half ago I described the Crow Pass Traverse in Alaska Part I, however, this was only a small part of our ten days in Alaska. In the second post of this two part series, I will provide our trip time line as well as a brief description of our other major adventures.

On July 6th we spent the day exploring Denali’s lowest hanging fruits. We attended the sled dog presentation and toured the sled dog grounds. In this area we were not only able to meet the dogs, but also learn about the pack dynamic and watch the dogs in action. Following the presentation, Apryle and I took to the trails and ascended to Mount Healy Overlook, which offered panoramic views of the surrounding landscape.

In my life as a student athlete, I have taken a lot bus trips, everything from early grade school commutes, to 20 hour charter bus trips to Florida for winter track meets. I typically look at a bus trip as a means to an end, but on July 7th we took the most spectacular bus ride on Earth, in which the journey is both the means and ends. On the 170 mile round trip from the visitors center to Wonder Lake and back, we witnessed some of the most stunning vistas and unique wildlife viewing in North America. We identified numerous mammals and birds including: Grizzly Bear, Dall Sheep, Moose, Caribou, Willow Ptarmagin, Long-Tailed Jaeger, Greater White-Fronted Goose, and Short-Eared Owl.

The next few days were low key. On July 8th, Apryle and I ran from a trail starting at the Savage River, which led up to the Savage Ridge where we traversed the alpine section before dropping back down a densely vegetated gully to the road. July 9th we spent most of the day in transit, stopping periodically at streams to fish en route to our rented cabin near Willow. Leaving from our new home base, we travelled around the Turnagain Arm on July 10th en route to the Russian River. After a brief ~3 mile hike, we watched hundreds of salmon jump up raging rapids. Apryle and her dad fished the Kenai River, and we birded along the boardwalk at Potter Marsh where we spotted: Arctic Terns, Greater Yellowlegs, Sandhill Crane, Alder Flycatchers, Swainsons Thrush, Orange-Crowned Warbler, Yellow-Rumped Warbler, and Common Redpolls.

On July 11th, the goal was fishing. We traveled up the Willow Fishhook Road, and while Apryle and her dad tried to land a trout, I would jog up the road to meet them at the next hole. We took the road all the way to Hatcher Pass and Apryle and I ran an out and back on the Gold Mint Trail. This trail was pleasant. It followed the Little Susitna River and we turned around at an arbitrary point four miles into the run. The weather was cloudy and most of the views were in a fog, but the green foliage and sounds of the flowing river made for a worthwhile outing. The next two days consisted of the Crow Pass Traverse on the 12th and a lake fishing day on the 13th.

The final days of the trip were highlighted by the impressive boat tour of Kenai Fjords National Park. The park is 669,984 acres and is named for the for the numerous steep cliff inlets carved by glaciers moving down the mountains from the Harding ice field. On July 14th we traveled to the misty, cloudy town of Seward, I ran a quick few miles along the coast, and then we boarded the Glacier Express. The boat coursed through the various bays and inlets of Kenai Fjords where we spotted: Humpback Whales, Orcas, Stellars Sea Lions, Sea Otters, Tufted Puffins, Horned Puffins, Black-legged Kittiwakes, and Rhinoceros Auklets. But the most impressive sight of the trip were the towering glaciers breaking off into the ocean. Apryle’s dad and I were a bit sea sick, but it cleared up in time to enjoy a salmon dinner on board. We reluctantly returned to land and then on July 15th, we boarded our plane bound for Seattle, ending our great Alaska adventure.