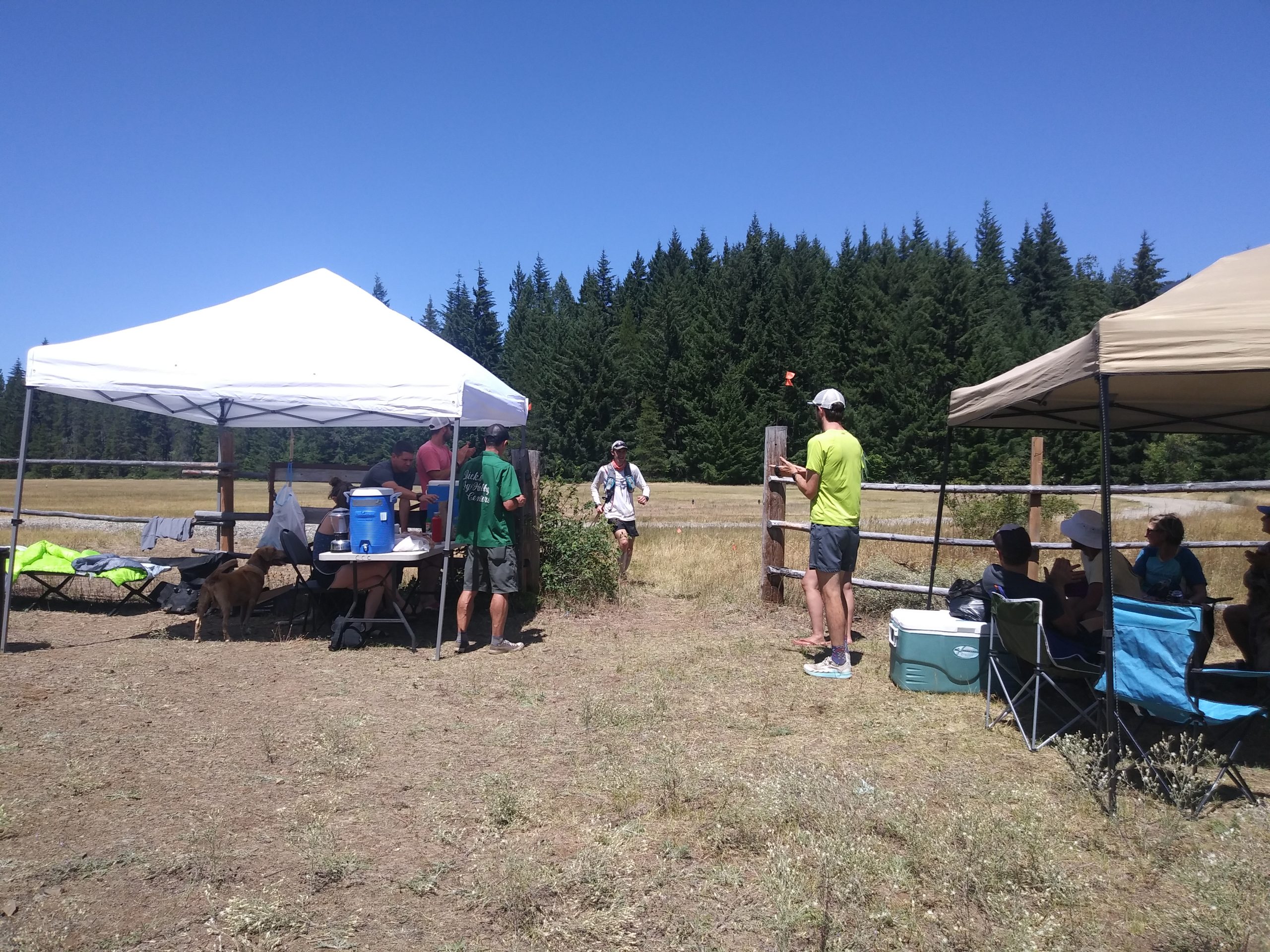 Needles 50K was one of my most anticipated races of the year, second only to Cascade Crest in terms of importance to me. I was signed up in 2020 but the race was cancelled due to COVID. Therefore I was extra motivated for this year’s race. I started the day with about one liter and six hundred calories of tailwind in my hydration bladder and seven gels in my pockets. I also elected to take trekking poles in order to prepare for Cascade Crest later in the summer.

I started the race fairly quickly, chatting with race legend Jesse Lange as we warmed up on the flat trails near the airstrip. However, once the course started to climb, I lost some ground to Jesse. I kept a pace that was comfortable to me, which was generally a slow jog. When the trail pitched up, I would sometimes power hike to save the legs.

After about five miles, I saw Rob Irr closing the gap behind me and I was excited to potentially share some miles with one of my Issaquah training partners. We spend the next eight miles chatting and running together at a comfortable, but solid pace.

The trail was a pleasant single track that was generally runnable despite the occasional loose rock descent. I recall the trail undulating in a wave-like manner. A gradual ascent would yield magnificent views of the surrounding mountains and then a steep gravely descent would take us back into the forest.

I assume that we took the first thirteen miles a little slow, given the breadth of conversation and quantity of laughs we shared during the first half of the race. A gradual forest road descent brought us into a well-stocked aid station. I spent a few minutes there, refilling my hydration bladder and taking in some calories. Rob however, spent a little less time at the aid station and I had to put in a surge to catch back up.

The following three miles were mainly flat forest road passing over large streambeds. I finally lost Rob on the next gradual climb towards No Name Ridge. I enjoyed the remote feel of this section as I passed through forest, meadows with wildflowers, and even rocky ridgelines.

The temperatures were heating up and the sun was baking so was I fortunate enough to pick up a handful of snow right before I began my out and back ascent of Thorpe Mountain. En route I passed Rob Irr on his way back down from the summit. I reached the summit a few minutes later and very efficiently took in the views. When I passed by the spot that I saw Rob earlier, I counted nine minutes, a considerable gap.

I kept the pace strong as I passed through the iconic cardiac needles topography. I did a little too much power hiking and not enough running, but it was all I could muster at the time. I found the ridgeline on the west to be more forested than the opening ridgeline on the east, which was excellent considering the fiery sun and sweltering temperatures.

After a seemingly endless dusty switchbacking trail I reached the final aid station at French Cabin and refilled my hydration bladder one final time. The volunteers informed me that Rob was about eleven minutes ahead and he was on a mission. Therefore, I too kicked in the afterburners and increased my tempo.

Although the final pass took some wind out of my sails, I was able to recover and descend with confidence. The trail was in great condition and passed through some upland meadows before reentering the forest. I continued to be assisted by gravity as the downhill grade persisted through the dense forest. Unfortunately for my pace, the trail transitioned from smooth dirt to an uneven path due to tree roots and loose rock.

The other thing that slowed my pace was the continual stream crossings of Silver Creek. No sooner did my shoes dry out and I was back through another tributary. I finally reached the Kachess Ridge trailhead just before six hours and was disappointed to see that a sub six-hour effort was certainly not on my horizon.

My body really began to fade as I weaved through the flat-forested trails that seemed so easy in the morning. Once I reached the airstrip, I was doubled over with a bad side stitch. Even though my form was atrocious, I was able pull it together and cross the finish line with a respectable pace. I ended up finishing third behind Jesse and Rob, with a time of 6:20.

Overall I thought that Needles was worth the wait. It was a well-organized event, there were no frills, and the course was beautiful. Thanks to all the volunteers, the race directors, and of course my wife Apryle. I hope to return next year to pursue a sub six-hour time.