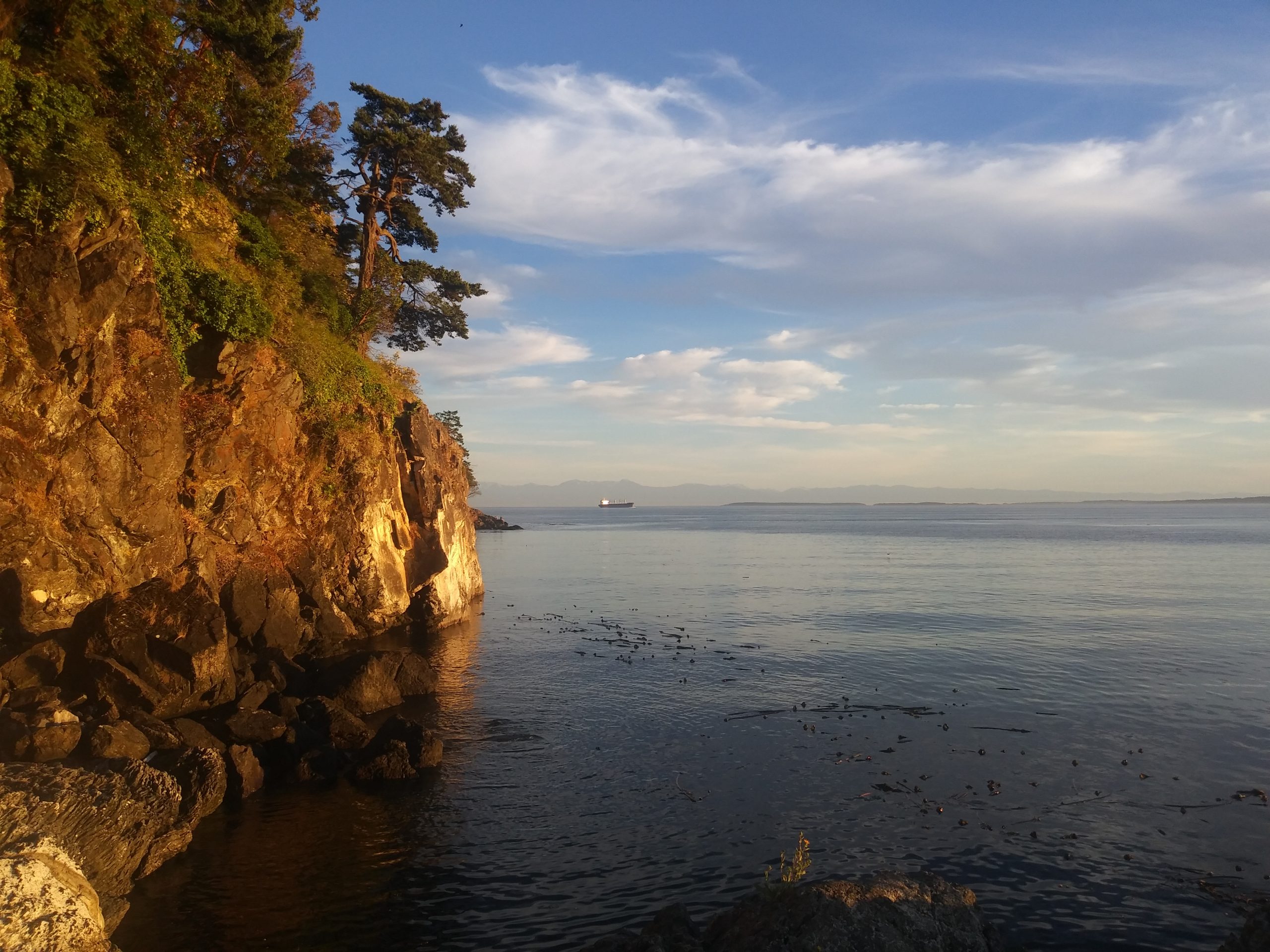 Apryle planned a spur-of-the-moment trip to San Juan Island on June 23rd. The morning of our departure we booked an airbnb cabin in central San Juan Island near Friday Harbor. It was a cute little cottage overlooking a grassy meadow and we were very lucky to land this place on such short notice.

On our way up to the Anacortes ferry terminal we booked a guided kayaking tour of Henry Island. Though we generally prefer self-guided kayaking trips, it did not appear feasible for this trip due to inability to rent a kayak on such short notice.

We arrived just in time for the 2:00PM ferry in Anacortes, however we did not have a reservation, therefore, we were stuck at the Anacortes ferry terminal with the parrots for an additional 2 hours. Fortunately, there was a nature preserve (Ship Harbor Preserve) with a boardwalk and beachfront at the terminal. So we thoroughly explored the beach and wetlands with the parrots in their travel cages. The parrots seemed to enjoy their time outside and a professional photographer even stopped by to photograph Bella on the beach.

We finally boarded the ferry after 2 hours of Ship Harbor exploration and took the hour-long voyage to Friday Harbor on San Juan Island. Upon arrival in Friday Harbor we picked up a pizza and checked in to our cabin. The cabin was perfect; it offered excellent views of an open meadow and had great natural lighting. We got the parrots situated with food and toys and then headed north towards Roache Harbor.

We were drawn first to English Camp National Historic Site. This area is managed by the National Park Service and preserves English Camp as well as many miles of trail on the neighboring hillside. We ran to the top of Young Hill and were treated to excellent views of the San Juan Islands and Vancouver Island to the north. Additionally, on our way up to the summit a Great Horned Owl notified us of his presence.

The ecosystem was very interesting and diverse and quite different from the mainland. The tree cover consisted of sparse conifer stands lower on the hill, which gave way to madronas nearing the summit. Additionally there were also oddly placed Oak stands interspersed on the grassy hillsides. The understory was mainly grasses and low growing shrubs and there were no Sword Ferns, which so commonly dominate the understory on the mainland. The terrain was rocky and somewhat barren and reminded me a lot of Acadia National Park trails.

After a quick loop around the hills, we crossed the road and descended down to English camp and Bell point. English Camp allowed for an interesting step back in time and we caught the sunset at Bell Point shortly after 9:00PM. We returned home as the light was disappearing around us and prepared for our kayak trip the next day.

I awoke at 4:30AM on June 24th and drove back to the Young Hill trailhead. From there I tagged Young Hill and then descended to Briggs Lake and took the extensive trail network around the area until I began an ascent to Cady Mountain. This trail was not officially on the Park Service land but was accessible to the public.

I ran down a trail in a nature preserve that appeared to be owned by the community of San Juan Island. It appeared as though the community volunteers were in the process of building a new trail system. The faint path fizzled out nearing Three Corner Lake Road and I decided to retrace my steps in order to reenter the Mitchell Hill trail system.

This trail system was very unique with narrow paths weaving through a diverse landscape. Sections were shaded under dense conifer forests with salal hedges. Other sections consisted of rocky barren hills with madronas dotting the gradual slopes. But perhaps most unique section to Washington State was the open Oak savannahs. The three distinct micro ecosystems blended together in a mosaic of natural beauty.

Following the 11.18-mile run I returned home and Apryle and I gathered up our supplies and drove to Roache Harbor. This town used to be a limestone quarry, but is now a fancy area with cottage style homes, extravagant hotels, and shops. We picked up some food for the kayak trip and then launched out of the harbor and began our journey around Henry Island.

As we paddled south along the island we saw the coast was developed with homes on the east side. We wrapped around the south side of the island and pulled out at a beach in Open Bay. There were some great examples of Shore Pine growing along the beach and we found oyster shells and many other unique things washed up on the shore. I took a quick, refreshing dip in the ocean and swam for a few minutes before eating some lunch. Then we continued around the south coast of the island.

The area around the south side became much more interesting and the typical San Juan coast emerged with the rocky cliffs and vibrant red madrones with their waxy green leaves hanging over the precipices. In addition to the more dramatic scenery, the south side of the island also had much rougher water, which tossed the little kayak around in the vast open waterway. It was difficult to take in the views because we were focused on keeping the boat upright.

We wrapped around Kellet Bluff to the west side of the island and the waters became much calmer. Here we observed the beautiful west side of the island in the Haro Strait, which offered many great opportunities for sea life observation. We saw several different kinds of jellyfish including: Moon Jellyfish, Fried Egg Jellyfish, Lions Mane Jellyfish, and Crystal Jellyfish. We also paddled through Bull Kelp forests and saw several Kelp Crabs. Additionally, there were several Harbor Seals hauled out near a small island to the west.

As we rounded McCracken Point to the north side of the island we were bowled over (hope you enjoyed the Kingpin reference) by the story of Spieden Island which sits to the north of Henry Island. In the 1970s the island was stocked with exotic animals by a group of investors, which called it Safari Island. Unfortunately the premise of Safari Island was to allow soulless rich hunters to shoot disoriented animals that were confined to a mostly barren 516-acre island. I am not opposed to hunting, but without an actual hunt, it seems unsportsmanlike to me. Many others agreed and the game farm was dissolved in the 1980s.

Following the dissolution of the big-game hunting resort on Spieden, James Jannard, founder of Oakley sunglasses purchased the island for $22 million. Therefore, we were unable to explore the island due to the lack of public access. Although, most of the iconic exotic animals are no longer present, there are still a few species on the island including: Mouflon Sheep from Corsica, Fallow Deer from Europe, and Sika Deer from Japan.

After passing by Posey Island State Park (which is a 1-acre island), and Pearl Island, we returned to Roache Harbor and ended our 9-mile Henry Island circumnavigation.

After several hours of relaxing in the sunroom with the parrots, watching the Barn Swallows swirling through the meadow we went out for an evening exploration of the west side of the island. We went to Lime Kiln Point State Park. Apryle and I hiked around the 41-acre park and visited the decommissioned limekiln and lighthouse. We concluded another day with a gorgeous sunset on the horizon and returned to our cabin.

On Friday June 25th, our final day, we traveled down to another National Historic Site and took the parrots on a 3.77 mile walk. It was a beautiful loop complete with a summit of Mount Finlayson (the parrots first summit). The summit ridge offered excellent views to the south of San Juan Island and as we dropped down to Jakle’s Lagoon we were engulfed in a thick conifer forest. We passed through the forest to a steep bluff, where we were treated to views of Griffin Bay. We even observed a fox combing the beach near the lagoon.

After finishing up our hike with the parrots we arrived at the ferry terminal just in time to miss the 11AM ferry because again, we did not get a reservation. We finally made it back to Issaquah after a long day in transit, concluding the trip. After two ferry misses and five hours of waiting, we thoroughly learned our lesion to book ferry trips ahead of time.

Overall it was an excellent impromptu adventure with many unique and interesting experiences. We explored new trail systems, circumnavigated another island, experienced beautiful sunsets, and had many wildlife sightings. After yet another trip to the San Juan Islands, they continue to impress and leave me wanting more.