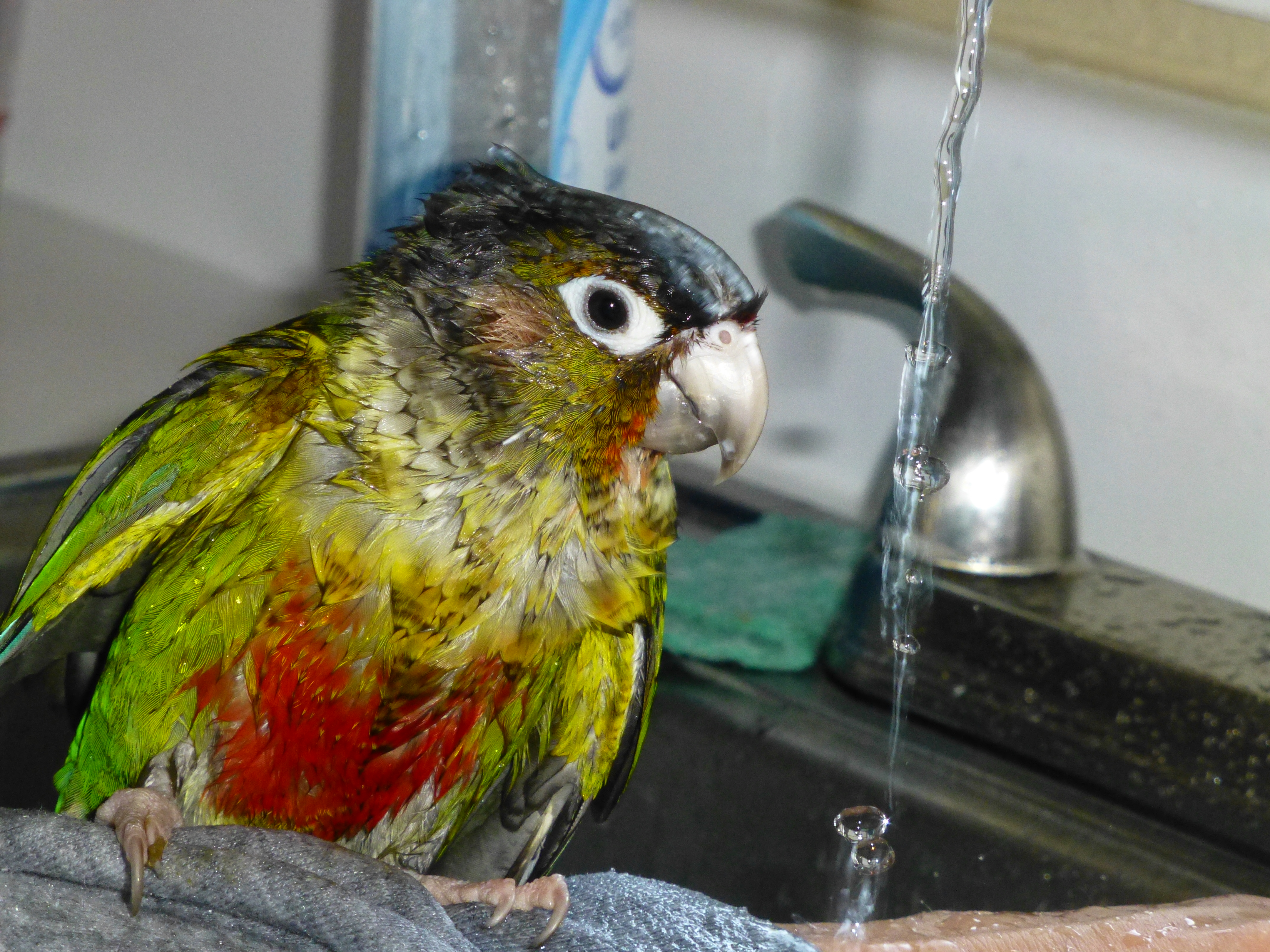 On a whim Apryle and I decided to adopt a pair of budgerigar parakeets. We named the birds: Banjo and Ravenna. They were an inseparable bonded pair. Banjo is the more garrulous, extroverted and adventuresome of the two. Banjo enjoys flying laps around the house and hopping down onto our hands to hull millet seeds. His coloration consists of a yellow crown, a blue breast, abdomen, and rump, and white wing coverts scalloped in black. Ravenna was similar in coloration but had a pure white crown and nape. Ravenna too enjoyed flying laps around the house but was less interested in landing on our hands for seed.

While on vacation in Alaska, Ravenna alluded her bird sitter and escaped into the woods of Sammamish. This was quite upsetting, losing our little friend and seeing Banjo sit quietly on his perch after the disappearance of his mate. We decided it would be best for Banjo to find him a companion. Therefore, we adopted a disheveled 6 year-old lime green and gold parakeet. We named her June and after the initial stresses of her transition, she settled in to take charge of the household.

It took some time for Banjo and June to warm up to one another but after a few months, they developed a healthy relationship. They enjoyed flying laps together, singing together, but still not eating together. Watching their relationship grow was rewarding but it is still sad to think of Ravenna and Banjo living two worlds apart.

Budgerigars or Melopsittacus undulates are long-tailed seed-eating parrots native to Australia. They have survived the pervasive inland conditions for over 5 million years and although our parakeets are blue and white, they naturally occur in green and yellow with scalloped black wings. They weigh in at 30 grams and have a 10cm wingspan. They are nomadic in nature and are typically found in scrublands, open woodlands, and grasslands. They form large flocks and travel based on both food and water availability. The large flocks and excessive numbers are there greatest survival advantage and defense against predation.

They nest in tree cavities and breed opportunistically, therefore when water and grass seeds are plentiful, they multiply. Typically laying 4-6 eggs per clutch with an 18-21 day incubation period and after hatching the little budgies fledge in about a month. A pair typically mates for life and they use their tetrachromatic color vision to view throat spots that reflect ultraviolet light. These vibrant throat spots are brightened by the ultraviolet spectrum and are used to attract mates and identify individual birds.

After five months of developing our relationship with the little budgerigars, we decided it was time to bring another bird into the family. We surfed Craigslist for a potential adoption candidate, but Apryle and I agreed that we were only going to meet a few birds, not adopt right away. However, we immediately forgot our pact when we met a four year old Green Cheeked Conure in Tacoma. He climbed onto my shoulder and into our hearts and we brought him to his new home that day.

However, the transition was tough on all of us, our new little Conure was cage territorial and would bite when we approached. Eventually he formed a good relationship with Apryle but became possessive over her and would lash out at me. After taking several dozen hard bites, I seemed to earn his trust and he realized that we were a family. We decided to name him Darwin, after the 19th century naturalist.

Darwin is a Yellow Sided Green Cheek Conure, which is a specific variety of the species. He has a limited vocabulary, and rarely uses it but has a wide variety of noises that he enjoys making when seeking attention. Darwin enjoys taking baths in the kitchen sink, going for walks in his green backpack, ringing bells, and chewing on wooden perches. His favorite foods are Blackberry, Sunflower seeds, Safflower seeds, Almonds, Pecans, Walnuts, Bananas, Peas, and Grapes.

Green Cheeked Conure (Pyrrhura molinae) is species of parrot native to the South American forest. They are most often found in west-central regions of Brazil, northern Paraguay, eastern Bolivia and northwestern Argentina. They are found in dense low forest and woodlands with glades, but can also be found in moist, cloud forest in the east Andes up to 2900 meters. They typically form flocks of 10-20 individuals and prefer to live high in the tree tops.

In terms of dimensions, they are 25-26cm long, have a 16cm wingspan and weigh in at 60-80 grams. Conures can live up to 30 years of age and like Budgerigars, are monogamous. The female lays 4-6 eggs per clutch with an incubation time of 22-25 days and 7 weeks for fledging. Despite being a popular household bird, very little is known about the Green Cheeked Conure in its natural habitat.

For more information on our flock and animal animal adventures visit: http://avianandexoticpetcare.com/