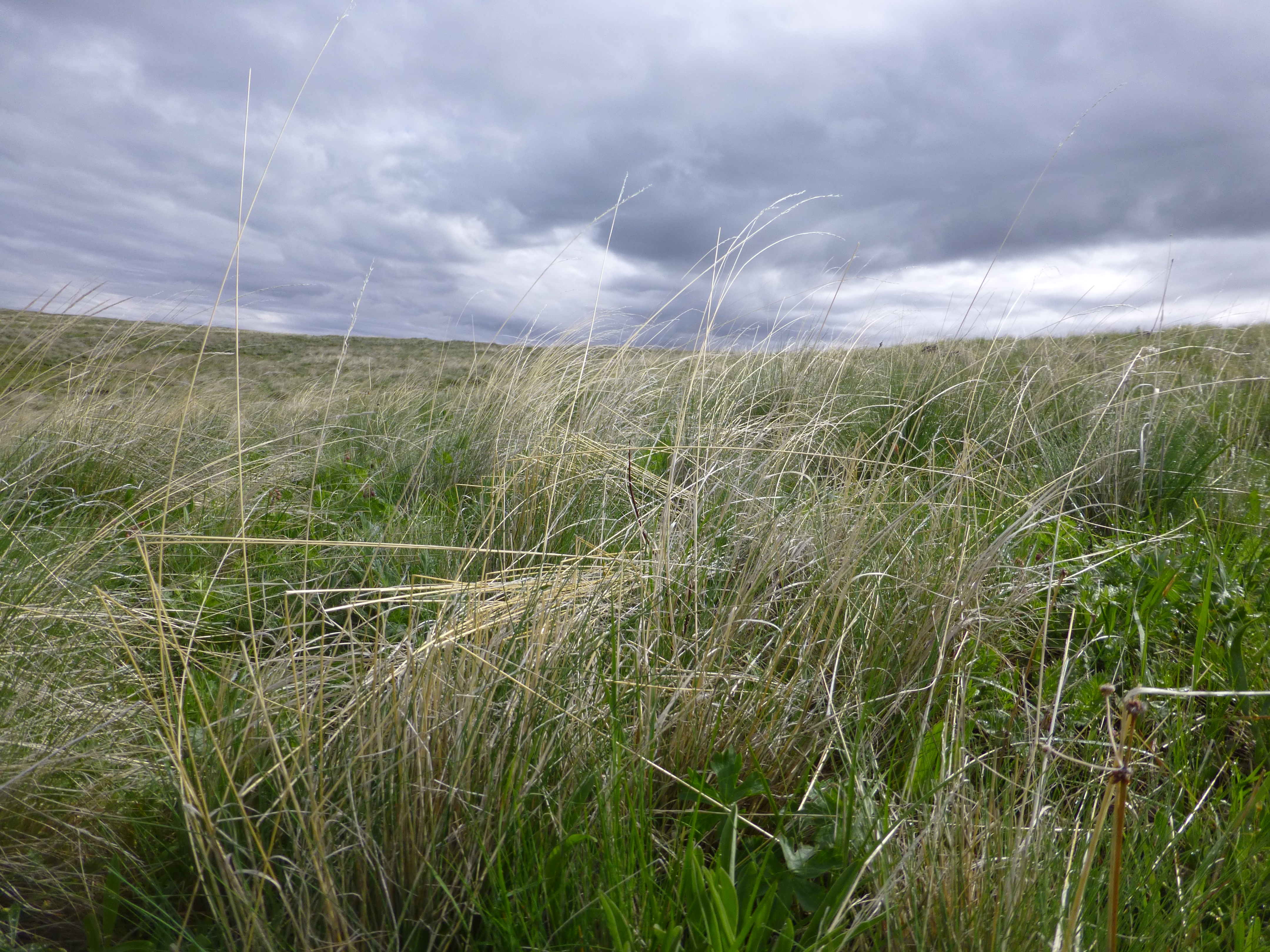 While perusing the shelves of books in the Pullman Library, I came across a book titled The Prairie Keepers in which a young field biologist described her experience studying raptors in the Zumwalt Prairie of northeastern Oregon. While reading I became intrigued with this obscure location that was home to the greatest number of predatory birds in the country and also one of the last unplowed grasslands remaining. The Zumwalt was portrayed as an expansive region belonging to ranch owners, situated in the center of the Blue and Wallowa Mountains. I knew that I must explore this place before migrating back to Issy Alps in June.

After a restful nights sleep at the Wallowa Lake Trailhead, Apryle, Darwin and I headed north to Crow Creek Road off highway 82. While on this four mile narrow road, we witnessed at least eight separate Hawk nests in the nearby Willow Trees. We made the turn onto the gravel Zumwalt – Bucknhorn Road and entered the inconspicuous Zumwalt Prairie Preserve. The Prairie was so inconspicuous in fact, that we were not aware we were in it until we reached the Horned Lark Trailhead near the end of the northwest boundary. We parked the RV and Apryle and I decided to run the 1.9 mile loop while Darwin stood sentry at the dinette window.

The trail was non existent and we had only fence posts with blue dots to guide our way. We passed over the thick Idaho Fescue, Blue Bunchgrass and hundreds of vibrant wildflowers that punctuated the landscape. The trail started on a knoll and descended to the marshy Pine Creek which thoroughly soaked our shoes before returning back up through narrow gulches teaming with hydrophilic plants. The trail showcased the immense native grassland well and was aptly named because we identified our first Horned Lark, a bird that we had been trying to locate for nearly three months.

After running one of the trails, we were not extremely motivated to do any further loops considering that the landscape was nearly identical as far as the eye could see. However, given my curiosity and need for mileage, Apryle took the RV down to the junction of Zumwalt – Buckhorn Road and Old Imnaha Road and told me to meet her there in two hours. I wasted no time in heading east to the Duckett Barn Information Center following a rutted out dirt road at the base of the Findley Buttes. I gathered some information at the kiosk, stopped to observe a colorful Lark Sparrow and continued up Duckett Road to the Harsin Butte Trailhead.

Harsin Butte is a 5529 foot extinct volcano that offers spectacular views of the Imnaha River Canyon and Seven Devils to the east. The trail was barley visible at the start of the 700 foot climb and turned non existent near the summit as it passed through a scattered pine forest. The rows of trees appeared deliberately placed and the earth changed from thousands of hues of green to a bunch grass carpet with a scattering of bronze pine needles and jagged rocks peppering the hillside. I reached the top after about .8 miles and was rewarded with beautiful panoramas. On my way down I spooked my third new bird discovery of the day; as a pair of Gray Partridges dove off a rock ledge.

The weather did not fluctuate much from overcast skies with a mild temperature in the high 50s to low 60s, perfect weather for running. As I descended from the Butte I mistakenly headed northeast down Old Imnaha Road instead of southwest to where Apryle was expecting me. I corrected my error and pressed on down a narrow road, consisting of two rutted out dirt troths with dense grass reclaiming the center and the berm. I grew nervous that I had crossed over into a ranchers personal driveway, but with a hard meeting place and time I pressed onward to the junction. With my Harsin Butte adventure behind me, I was focused on covering the distance as quickly as possible.

Bombing down the final hill I met up with Apryle and Darwin and we made our way slowly back to highway 82 down the gravel road. I was thoroughly impressed with the beautiful views, colors, and flora of the Zumwalt Prairie, but slightly disappointed with the lack of raptors in the vast prairie itself. One of the main draws for me was the overwhelming quantity of birds of prey but we observed very few, with the exception of the nests near the outskirts of the preserve. Overall, I feel fortunate that I had an opportunity to run across one of the last true grasslands of the United States and will remember my experience for years to come.