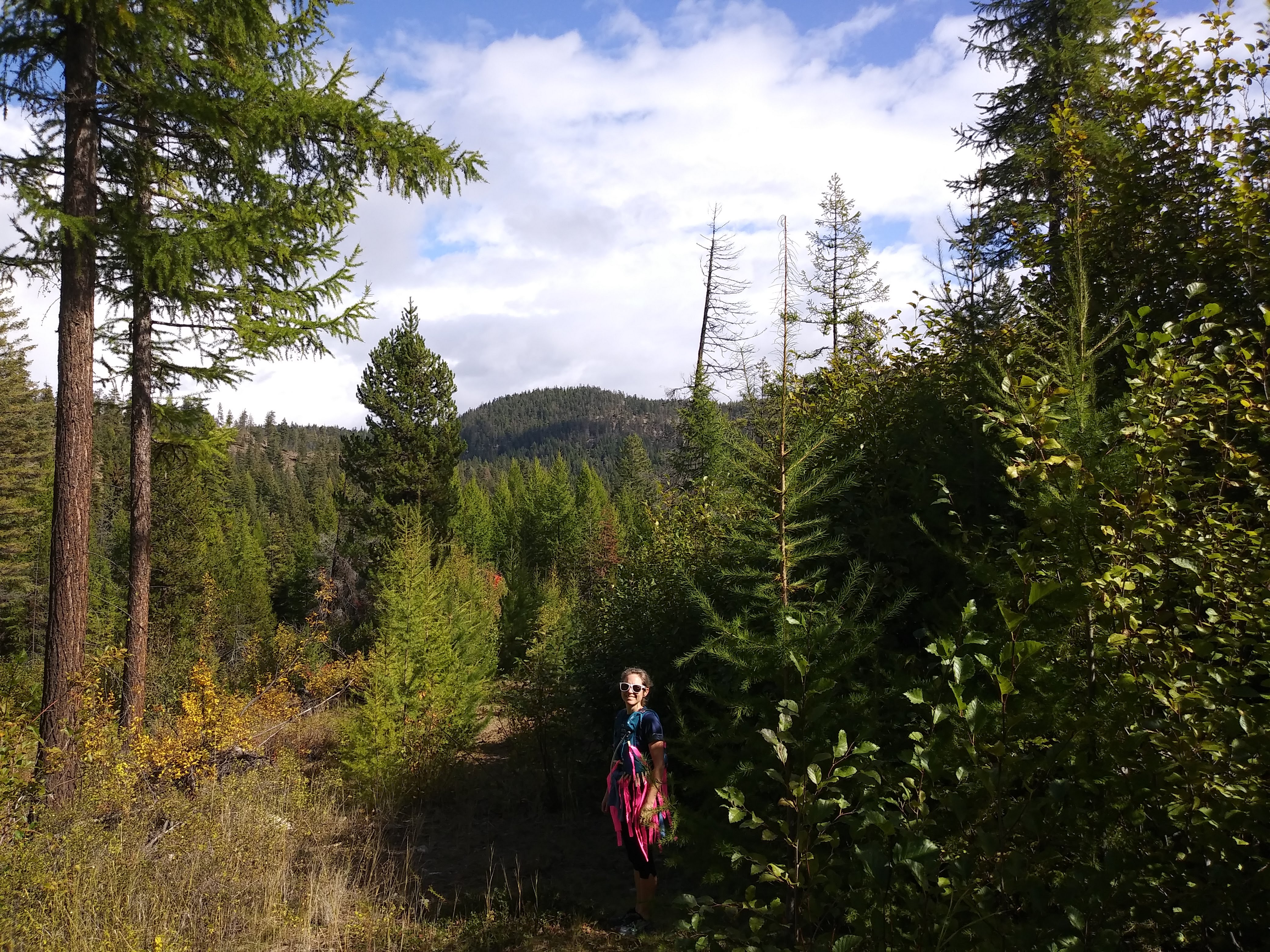 Apryle and I have talked about hosting a race in Whistler Canyon ever since our first trip to there on July 19th of 2016. At that point we were living in Tonasket and considered hosting our first race there as early as September of 2017. However, because of Apryle’s PhD obligations and our need to move east and west of the cascades biannually, we decided to forego that idea. Then in the latter part of 2018, we revived our plans and committed to hosting the inaugural Whistler Canyon 10 and 50-miler. I will spare you the crucial but boring logistics and behind the scenes work, and highlight our race week in this post.

I returned from my Maine trip with my parents on Tuesday morning and Apryle and I used the day to prepare all of our race supplies and ready the parrots for our cross-state journey. Along the way we picked up 55 gallons of water and other race day foods, before checking into our cabin at Paws Produce. It was a perfect little cabin, within 10 miles of the start/finish area. After getting the parrots set up with food and toys, we drove up to the start/finish area at the Whistler Canyon Trailhead to meet Karen (Head of Oroville Chamber of Commerce) and pick up a weed-eater. We were gearing up for some trail work, cutting back roses and other encroaching vegetation. Unfortunately the battery did not fit and we decided to go with the simplest plan and use our handheld clippers.

It was a sunny day in the low 70s, but the canyon felt warmer. We loaded up our hydration packs with confidence streamers, water, and the clippers. The opening 2.25 miles from the trailhead required no real maintenance, but once we reached the Black Diamond Lake trail, it was a different story. The trail was overgrown in the valley sections with spiny roses, dense ocean spray, bushy willows, and many more plants looking to reclaim their turf.

Trimming back native plants was a bit of a shock to my system, given how many hours I have invested in restoring native plants. However, I convinced myself that we were only trimming back a small section in an ocean of protected vegetation. Even though we only covered about 10.8 miles, due to our efforts it took us 4 hours to complete our mission. We were pleased with our accomplishment because we knew that we finished the first six miles of the 50-mile race and the entire 10-mile race course. Once we finished, we prepared our equipment for the much longer day two.

The next day, we left Wilcox Trailhead at 9:30 AM and took the Wildhorse Springs trail to the Junction with the 100 trail. This section was a little over four miles and offered beautiful forested surroundings and more importantly, well-maintained trail. The most arduous task of the Wild Horse Springs trail was the junction with the 100 trail. Here we spent a healthy amount of time mowing down grass with one pair of hand trimmers, and setting up signage to indicate directions (this intersection is used three times in the race).

From the intersection, we then turned onto the 100 trail and once again enjoyed relatively clear, wide open trail. After another four to five miles we reached the FS road 3525, at a point that we named Junction. Junction serves as an aid station in the race. In order to make things a little harder for the racers, and ourselves, we continued on the 100 trail back to the Wilcox Trailhead. Once again this 2.5-mile stretch was in decent shape, requiring some mild pruning and frequent marking due to a few deceptive intersections. We were excited about this loop, as it contained larch, aspen, pines, and other changing deciduous shrubs that provided an array of colors along the route. We finished the 12-mile loop in just under 4 hours and were still feeling very good about our time schedule.

Immediately following trail prep part one, we hit the FS road 3525 up to 255 to begin part two. Fortunately the next part of the race is quite scenic but required no trimming as we drove the FS road up to the 255/McDonald Trail junction. The views of the plains near Chesaw and into Canada were stunning, but I did not have time to enjoy them too long; I had more work to do. Apryle had to go back to the cabin to feed the parrots, so she dropped me off and I ran down the McDonald trail; however, because we were planning to come back to that section of trail tomorrow, I did not bother trimming or marking it (although it really needed it). In fact after about a quarter mile it became so difficult to follow the trail that I started flagging as a breadcrumb approach. I reached the McDonald aid station and made the left turn onto the 100 trail.

I knew that I was in for some pain on this stretch because shortly after starting down the McDonald trail I realized I had forgotten my clippers. Therefore, my only option was to tear back the roses and small limbs with my bare hands. This section required a moderate amount of maintenance, and by the time I reached the overlook clearing my hands were quite sore and imbedded with thorns. Fortunately, along the overlook section, the only infringing plant was ceanothus, but even it proved to be a stout little shrub. While on the ridge I was able to enjoy the beautiful weather and soak in the views while forgetting about the amount of work we had left to do.

I continued on, marking occasionally until I reached the 100/Wild Horse Springs intersection. I was impressed with our handy work and knew that I would be able to fly the rest of the way to the Wilcox trailhead since we had already worked on that section in the morning. I finished out the eleven mile run two in three hours at the Wilcox trailhead where Apryle was waiting for me. My total for the day was just over 23 miles and 7 hours on the feet.

Day three was without a doubt the most challenging of the bunch. The weather turned from sunny, mid 60s to rainy/snowy, mid 30s in one-days time. We began the day from the 255/McDonald junction with the intention of trimming and lining the McDonald trail, bringing in 15 gallons of water to the McDonald aid station, and adding additional confidence streamers and signage to the Black Diamond trail. Upon finishing all of our tasks we had covered a scant 12.5 miles in over 7 hours. I wheeled six 2.5-gallon water jugs in a wheelbarrow, while Apryle trimmed back infringing plants. In a few cases where down trees blocked the way, we had to empty out the wheelbarrow and lift it over logs (along with the six jugs of water). In addition to that, the grade of the hill was so steep and in some areas slippery, that it was quite difficult to maintain control of the wheelbarrow.

We were elated to make it to the McDonald/100 junction, after hours of course maintenance. We hid our water jugs and continued down the 100 trail to the Black Diamond trail junction. At this point, it was getting very cold and the rain was coming down harder, soaking all the vegetation. Even though we spent hours on the Black Diamond trail, when we passed back through, it looked as though no one had been on it for months. We re-trimmed through the brushy sections and put out wrong-turn markers at the tricky spots along with long streamers of pink tape to funnel runners in the correct direction. Finally after marking out the spot we were concerned about on the Black Diamond trail, we retraced our steps and ascended the steep McDonald hill back to our truck.

We were entirely spent, but the day was not even close to being over. In fact I was so cold and tired, that we marked the road sections from the truck to avoid getting out. By the time we reached Summit Lake and the Mt Hull junction, the sleet had turned to snow. I had to line the trail to the summit and put a hole-punch and cone at the top. While I headed to the summit, Apryle marked the intersections around the lake and at the base of the ascent. There was even some accumulation of snow when I reached the top of the mountain. We knew the racers would be in for a challenging day on Saturday, due to the incredibly unseasonable weather.

After all our efforts on day three, my total was 14 miles and 7.5 hours on the feet. We returned to the cabin, visited with the parrots for an instant and then drove into Oroville to meet our brave runners at Hometown Pizza in Oroville. After the three-day course maintenance/marking marathon, my totals were 48 miles and 18.5 hours on the trail. However, this leaves out the travel time to and from the trailheads, the trips to Oroville to get tables, chairs, wheelbarrow, and groceries. In addition to the 18.5 hours of running, we put in at least another 15 hours worth of errands and travel. This marked an end to part one of our race directing journey, we were excited to showcase our efforts in part two, the race!