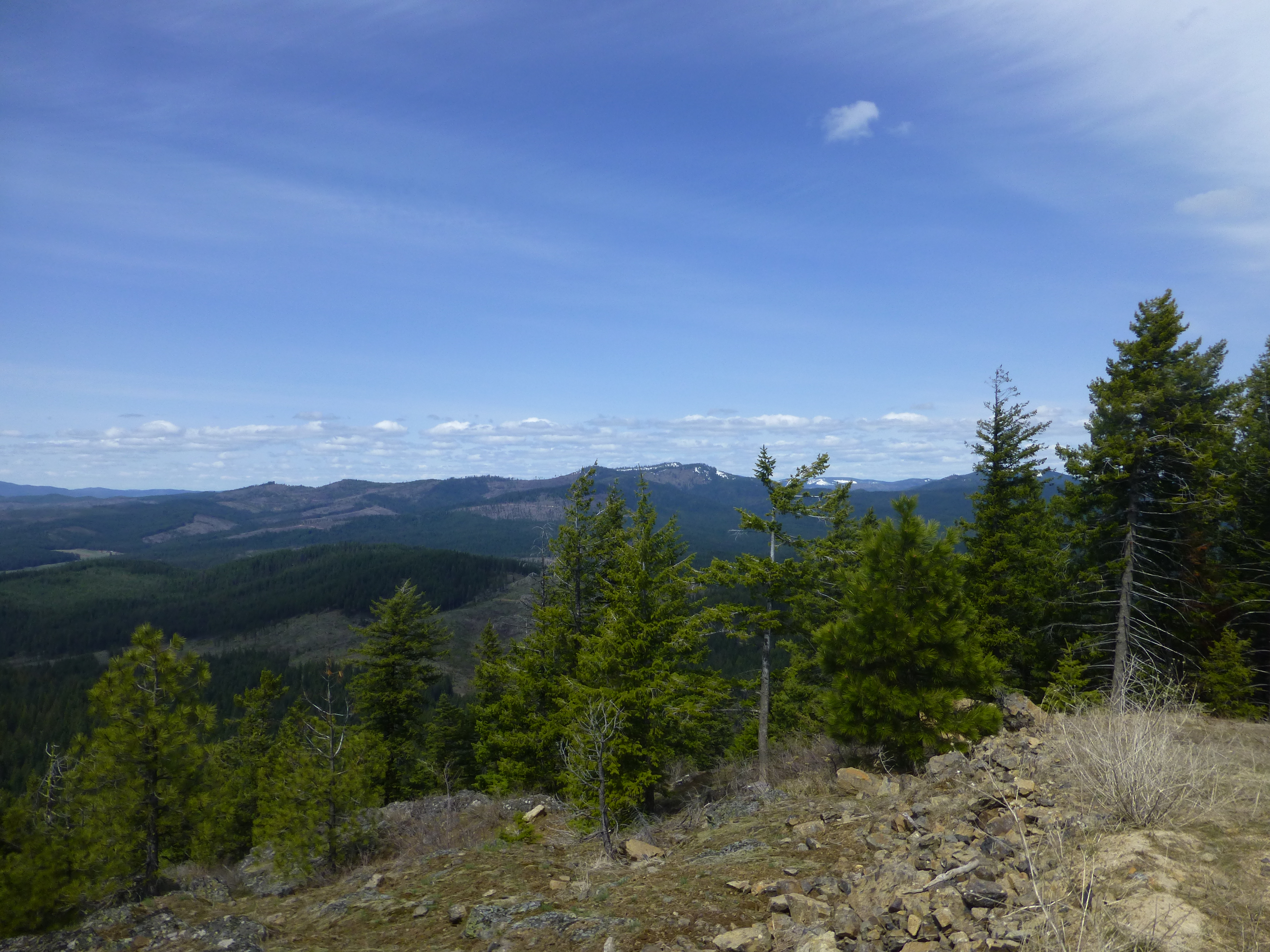 Now after a few weeks removed from our four month stint in Pullman, I can fully reflect on the area and highlight a trail region that I refer to as the Southern Idaho Panhandle. This region consists of the eastern fringe of the Palouse and the western flank of the Rocky Mountains. April and I spent a significant amount of time running along the Snake River when we were in Idaho, but we also explored the forested mountainous terrain further to the interior of the state. This appeared to be a transition zone from the prairie to the mountains that offered a welcome change to the monotony of farm land.

The first trail network that Apryle and I explored was Moscow Mountain, which shared the same name with the town in its foreground. This forested range was ever visible from the Pullman to the west and therefore, was the first place on my list. The range had numerous trails and forest roads spiderwebbing throughout the green space. There are several entrance points and it is maintained by an area mountain biking club.

In our first trip to the Gnat Creek Winter Parking Area, the snow kept us from becoming too adventurous with our route finding. We mostly followed a winding forest road that was slick with ice and slush. The road ascended through thick conifer forest which eventually opened up to a eastward viewpoint. Due to the volume of snow and the uneventfulness of the surroundings Apryle and I only made one return trip to Moscow Mountain, which was from the Headwaters Trailhead further to the north.

The Headwaters Trailhead offered a good mix of forest roads and trails and due to our late March exploration, the snow volume was minimal in the lower reaches of the mountainside. The run from Headwaters Trailhead served as my final long run in the lead up to the Lake Sonoma 50 miler and it was highlighted with a tag of Paradise Point Summit. Although much of the lower reaches offered pleasant winding trail through the forest with the occasional cascading stream, the final miles near the summit were still blanketed in a foot of snow.

Overall Moscow Mountain is a worthwhile destination when living in the Palouse, it offers cooler temperatures, forested slopes, and an extensive trail network. Fortunately, there is no collusion necessary to gain access to this secretive mountain range.

Paradise Ridge is Idaho’s equivalent to Kamiak Butte County Park, a forested north face with a bare ridge dotted with Ponderosa Pines and south facing grassland. However, there is not nearly the same signage and it is easy to get lost on the sporadically overgrown trails. When Apryle and I first took the dirt road to the ’trailhead’ we spent hours wandering around on public/private trails until we realized that the actual trail followed the gated road to the ridgeline.

That said, the forested mountainside was interesting to route find, following fading forest roads and prominent game trails until a summit was reached or the path deadened into thick forest growth. However, after finding the official ridgeline trail, I found it best to take it as opposed to bushwhacking between game trails.

The views from the ridge were quite illuminating, with both Pullman and Moscow visible and a patchwork of fields filling the spaces between. As the winter turned to spring, the ridge was abuzz with colorful flying insects and the vibrant plants they were pollinating. The trail allowed for a glimpse of several micro ecosystems; the Fir, Larch, and Willow forest, then the Ponderosa and wildflower ridge, and finally the open grassy south slope.

Starting at the bottom of the paved road, there is dirt road that leads to a fenced off section with hundreds of used tires to block off motorized entrance. The dirt road then winds up to the narrow ridgeline trail. The rideline trail eventually leads to an even narrower path that cuts through the grasses before randomly ending at someones private farm. After this anticlimactic end, the only choice is to head back up to the ridge and then back down to the road.

Apryle and I traveled to Mary Minerva McCroskey State Park on two occasions and explored the majority of its trails as well as the Skyline Drive. The park is Idaho’s second largest state park, encompassing over 5,300 acres. It features an 18 mile road along Skyline Ridge on Mineral Mountain. It is a transitional zone between the Palouse Prairie to the west and south and the Rocky Mountains to the east. The road passes through dense Cedar forest and Ponderosa stands. The park is an excellent habitat for Moose, Deer, Bear and numerous bird species due to its remote location and minimally utilized landscape.

The park was created by the Man Who Gave Away Mountains: Virgil T McCroskey, an impressive conservationist that lived in the Palouse region of Eastern Washington. McCroskey purchased several tracts of land that were likely to be logged and linked them together into a 4400 acre parcel.

Before donating the land to the state he then blazed the 18 mile Skyline Road, created viewpoints, planted flowers, and built picnic areas to make the area more appealing to tourist. However, the Idaho legislature did not feel that the park would generate enough revenue to offset the loss in taxes.

Therefore, McCroskey, who was in his late seventies at the time, agreed to maintain the park at his own expense for the next fifteen years. He fulfilled this obligation to state and died just two weeks later at age 93. McCroskey named the park in honor of his mother, a pioneer from Tennessee that established a homestead near Steptoe Butte.

No trip to Idaho would be complete without a cliche trip to the top of Potato Mountain. During one of my trips to Deary for work I spotted a large tree covered mountain that begged to be explored. I parked in the quaint downtown and followed a paved road past some houses before turning to a forested stone path. From here I followed the gravel road as it switchbacked up to the towers on the summit. The views were surprisingly impressive and I was able to maintain a solid pace both up and back to the car.

The St Joseph National Forest is one of the three forests that are aggregated into the Idaho Panhandle National Forest and it encompasses about 867,882 acres. Apryle and I made two trips to this forest and set out from the White Pine Drive Trailheads. On my first run I simply explored the Three Tree Butte area and enjoyed the thickly forested trails that carved along the mountain side.

The second trip Apryle and I endured an intimidating thunderstorm in order to make an ascent of Bald Mountain. The trail traversed a mostly runnable ridge that eventually led to a snow covered mountainside. An interesting transition from the vibrant green forest floor of the majority of the trail. The summit did not provide a view due to the thick fog that engulfed the air but the fire lookout tower was impressive and I was happy to tag yet another Idaho summit.