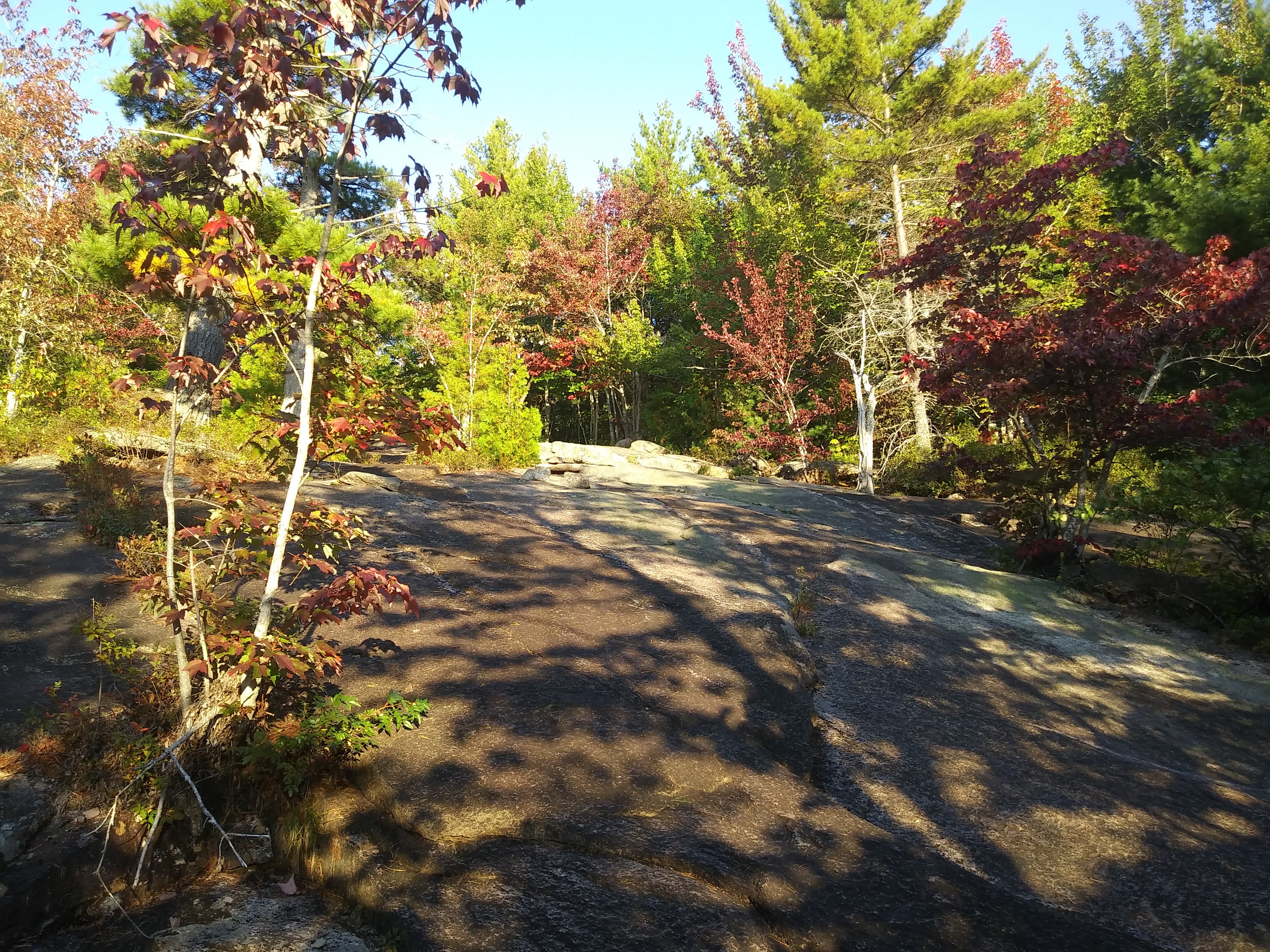 Following my northwest arm traverse, I decided to tone it down a fraction and run a Quiet Side traverse on my next day in Acadia. I started this run from Echo Lake and ascended the Beech Cliff trail. This was one of the steepest trails in the park, so steep in-fact that there were many sets of steel ladders to climb. It was a little unsettling due to my combined fear of heights and fear that perhaps the ladders were not secured properly. I made it through this section and onto the lookout tower on Beech Mountain, my first summit of the day and fourteenth of the trip to Acadia.

I descended 500 feet down the West Ridge trail to a long pond, referred to as Long Pond. This switch-backing trail passed through some beautiful deciduous forest and the area had a much more secluded feel. Soon after running by the developed section of Long Pond, I ascended another 800 feet up the rocky Perpendicular Trail to Mansell Mountain. This peak harbored no interesting views, but the ascent provided some good vantage points to the lake below.

From Mansell Peak, I followed the Razorback trail to Great Notch (summit 3 of the day and sixteen of the trip). The trail switched names to Bernard Mountain trail and the vegetation transitioned to a coniferous canopy with a vibrant mossy carpet. I passed by Knight Nubble and Little Notch, which marked summits 4 and 5 of the day. My sixth and final summit of the day was Bernard Mountain. This was another anticlimactic peak topping out just above 1028 feet.

After topping out on Bernard Mountain, I bounded down the trail to Mill Field and in order to get myself back to Echo Lake, I had to navigate a maze of forest roads and crisscrossing single track through the thick stands of mixed deciduous forest. Following the Gilley and Cold Brook trails, I made my way back to Long Pond. I was able to push the pace over the final miles on the gravel Lurvey Spring Road back to Echo Lake Beach. The Quiet Side traverse was less dramatic than the Northeast Arm Traverse but still a worthy challenge, taking me 2 hours 12 minutes featuring six more summits, 10 miles, and 4364 vertical feet.

My third Acadia run was focused in the Cadillac Mountain region. I started quite early and was lucky enough to watch the sun rise behind Champlain Mountain as I made my ascent of Dorr Mountain. I descended the South Ridge trail to Canon Brook trail. The Canon Brook trail turned back upward and followed a cascading brook down a series of granite slabs. This was easily my favorite trail of the trip, lasting only one kilometer it created a lasting impression. A beautiful contrast of green conifer needles and the changing red leaves of the deciduous trees bordered the sloping granite slabs.

Upon reaching the ridgeline, I turned south and passed over Dike Peak, the second summit of the day and twentieth new summit of the trip. The ridge was quite rocky with many alpine-like flowers, which gradually gave way conifer forest as I looped around Eagle Crag (third summit and twenty-first new summit). I returned back across the ridge to Cadillac Mountain (fourth summit) and then descended down the Schiff Path back to The Tarn where I started the morning.

Acadia run number four began even earlier than number three, and was in a familiar place. In the dim lighting of the morning I started up the Hadlock Brook trail, which I took to the Maple Spring trail. From there I ascended the Giant Slide trail up to Parkman Mountain and Bald Peak. Then I continued on the same trail as my northeast arm traverse to Gilmore, Sargent, and Penobscot. After the first five repeat summits, I continued down the Sargent South Ridge trail to reach Cedar Swamp Mountain (twenty-second new summit). I returned back to the trailhead via Hadlock Brook, then crossed highway 3 to ascend the short steep trail to Norumbega Mountain (twenty-third new summit).

For my fifth and final day in the national park, I decided to go for one last run and explore the only section that I had yet to see on the Quiet Side. After four days of sunny, warm weather, this was the first day that was cloudy and a little cooler. I ran to the summit of the namesake of the park, Acadia Mountain. Then descended Valley Peak trail along the cliff above Somes Sound. There was a fog hanging over the sound, and several fishing boats and the moody weather added an interesting change to conclude my Acadia adventure. After dropping down in elevation, I climbed right back up to the top of Valley Peak and then continued the loop over to Saint Sauveur Mountain. These three peaks became number twenty-four, twenty-five, and twenty-six for the trip.

Overall I was incredibly impressed with the Acadia National Park trail system, scenery, and terrain. I ended the trip with 54 miles, 22,167 vertical feet, and 33 summits (26 unique).