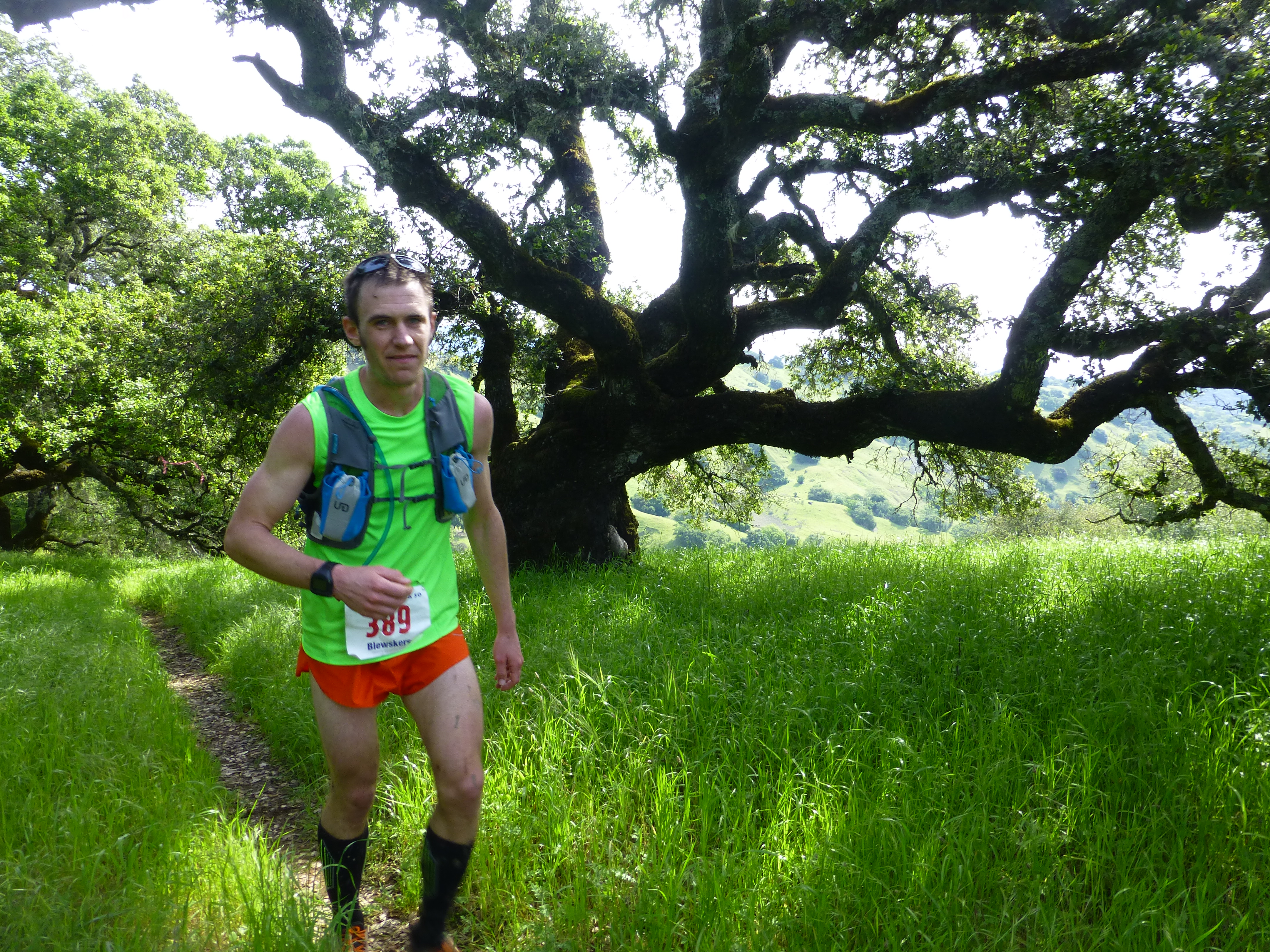 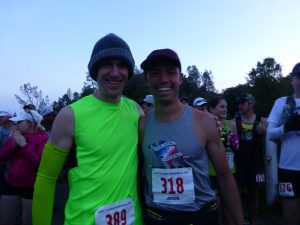 Background
After about three years of restricted time and low income due to Physical Therapy school, I decided that 2017 would begin my attempt at a serious racing schedule. With that said I set out a pretty ambitious event list including: Chuckanut 50K, Lake Sonoma 50 miler, White River 50 miler, and The Rut 50K with a few other low key events peppered in-between. This schedule would allow me some time to relax and switch gears to mountaineering pursuits with my wife in the summer.However, after Lake Sonoma this weekend and the surprising Golden Ticket acquisition, my plans have drastically changed to include the Western States 100. I am still in disbelief, especially after such an atrocious performance at Chuckanut, but after twelve years and 37,000 miles I feel my persistence is paying off.

I can still remember studying in the lab at St Augustine with irunfar coverage of various races on in the background, with aspirations that one day I would be competing in those events. On Saturday that dream became a reality; and though I was not with the lead pack, it felt invigorating to be in the mix for the top ten. Little did I know that as a result of a couple of drops and some consistent pacing that I could run my way into a top five position. 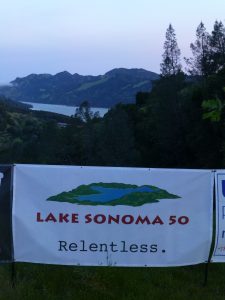 The race started off quickly, but I thought that I had things under control and I never felt as though I was pushing beyond my comfort zone. When we jumped from the road onto the trail, there was a small gap between the lead pack of five guys and the pack of four that I was in. Once we hit the trail the pace let up slightly; Dakota reconnected with the lead pack and Jacob Phillips and I formed a solid duo and tackled the next 16 miles together. I kept an eye on our splits and I knew it was an adequate pace for a sub seven hour effort – which was my goal. The first 18.8 miles felt like a Sunday long run; Jacob and I were chatting about school, careers, family and training which made the miles fly by.

In retrospect; I wonder if I would had pushed to stay with the lead pack if I could have maintained the pace or if I would have blown up and crawled my way to the finish line… perhaps I will save the experiment for another day. At any rate, Jacob and I arrived at Warm Springs in 1:23 and to Madrone Point in 2:20. Apryle met me at Warm Springs where I traded my hand held for my hydration vest, which I believe was a smart move because I typically drained the camelback between aid stations. Madrone Point was lively and buzzing with people, cameras and even a tyrannosaurus… It was just past this point where Jared Burdick and Chikara Omine passed Jacob and I. But we stayed calm and continued to power hike the hills to save our legs for the descents and flats. 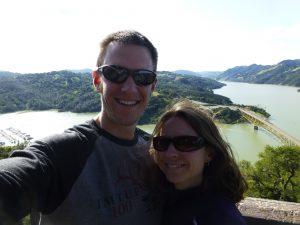 As I approached No Name Flat I caught a glimpse of the four leaders on their way back to the finish – Canaday, Jones, Mocko and Bak. I spent a little more time at this aid station to refuel and Jacob caught back up to me. Shortly after leaving the aid station, we passed a struggling Jared Hazen and kept the pace up hoping to possibly roll up a few more runners from the lead group. Unfortunately, Jacob and I parted ways prior to Madrone Point and I was on my own to hunt down the guys in front of me.
Apryle’s support was quite instrumental in this stretch of the race; I could hear her cheering me on down the hill from No Name Flat while she was still over at Madrone Point! The seven miles from Madrone Point to Warm Springs was aesthetic, exposed, and warm but also stressful. I had seen my pursuers and those who I needed to pursue at the turn around. I continued to catch glimpses of Jared right behind me and the gap between us shrinking all the way to the Warm Springs aid station. He arrived just before me and I believe he said that he was bonking and needed to refuel a while. 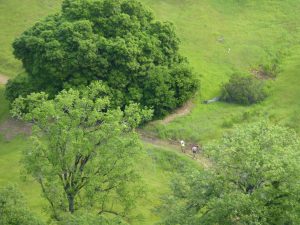 I ran out of the Warm Springs aid station hoping to put some distance between us before he regained his strength. This section was also interesting because a very skilled cameraman was running just in front of me through the mud and stream crossings. I asked him if I was in fifth and he responded yes and that Chikara was only 2.5 minutes ahead of me. I pressed the pace and began to hope that I might finish fourth.

I caught Chikara on a small roller and began to distance myself. I was on the home stretch with about nine miles to the finish. However, my legs began to fade and I had to start hiking up some inclines that I easily ran over early on in the race. I also knew the dreaded course reroute was looming, which featured a steep muddy grade that bypassed a washout section. The stretch from Warm Springs to Island View dragged on for an eternity.

When I reached Island View I was spent. An aid station crew member said that I was 26 minutes back of Mocko – an insurmountable time gap. I’m not sure why I lingered here as long as I did with only 4.5 miles to go; I had some cantaloupe, refilled my camelback and slowly trotted back out to the course. It was here that I was encouraged to press on and that the Golden Ticket was still not out of reach. The thought of the Golden Ticket had not even crossed my mind the whole weekend or race; my goal was sub seven hours and a top ten finish. It began to sink in… then I saw Jared Burdick on his way into the aid station. I thought I was toast.

He looked very fresh and I thought he would certainly catch me and it would be a sprint out battle for fourth place and possibly a Western States bid. A fire was lit under me and I found some hidden strength to run the remainder of the hills and put some distance between myself and Jared. I had run this stretch of trail on Friday evening so it was fresh in my mind and I knew it was completely runnable. I heard Apryle even before I saw the finish line and knew I had exceeded my goals. I finished the race in 6:53:12 and one spot shy of the podium. To top it all off I was offered the Golden Ticket which was forgone by the first and second runners.
I believe this to be a personal highlight of my running career.

Course Description
The course was beautiful; to me it seemed a cross between Texas Hill Country and the Issaquah Alps. The hills were unrelenting but runnable, similar to both Hill Country (Texas) and Cougar Mountain (Washington). However, the trails were void of any Hill Country rocks and any Cougar Mountain roots, making the single track blazing fast. I was quite used to the mud and stream crossings because of the extremely wet winter in the Pacific Northwest. However, what I was not used to was the heat. Although I spent a few years training in the 100+ degree Texas summers, I am not sure that the temperature in Newcastle has crested 55 degrees this year which made the relatively mild day in Sonoma feel sweltering. The views of the lake were spectacular, sometimes even diverting my focus from the race.