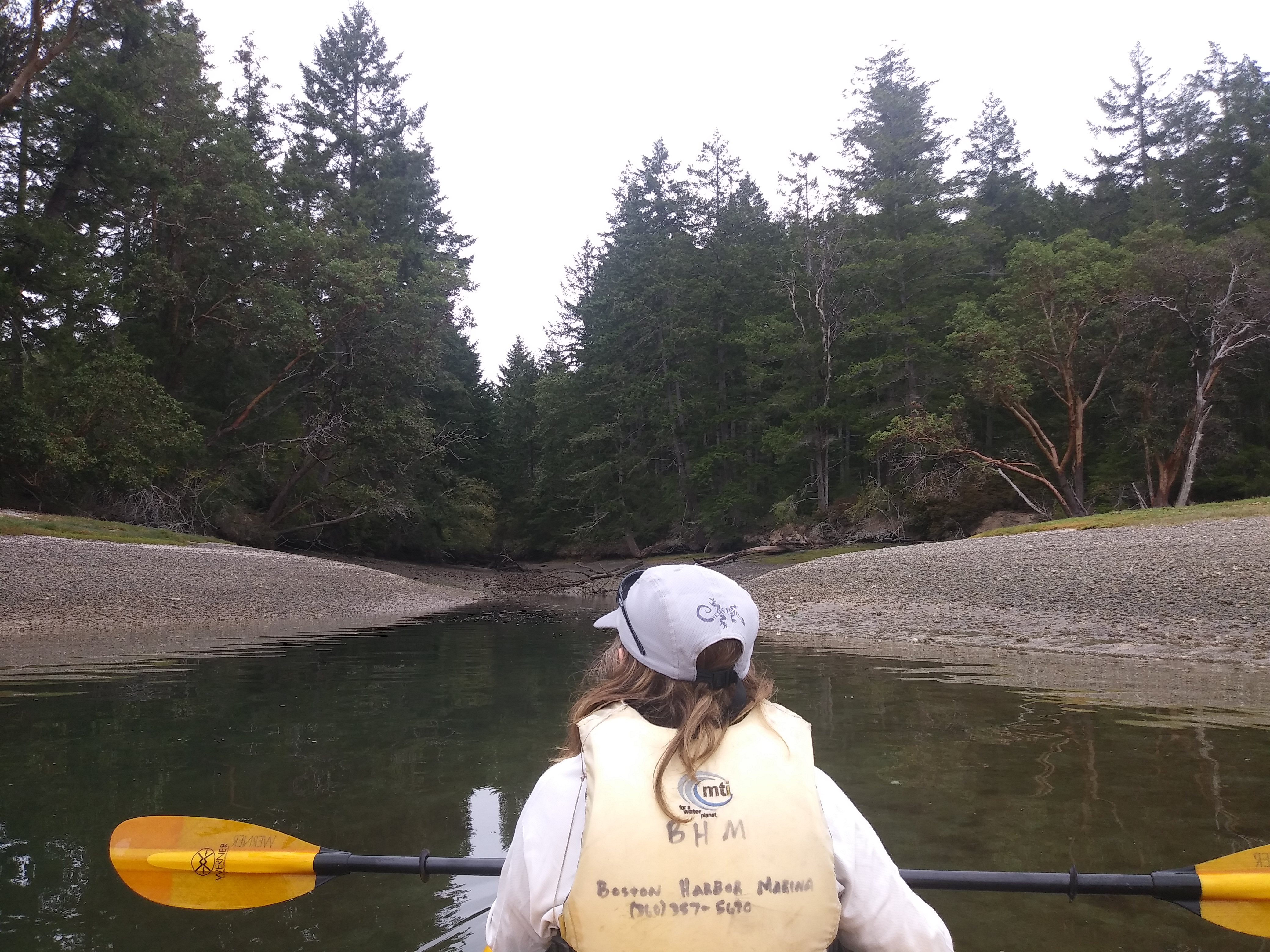 Rather than continue down the arduous road of describing each region in greater detail, I will take the circumnavigation of Hope Island tangent. On October 4th 2020 we took I5 southwestward to the states capital – Olympia. Then we headed north to the small community of Boston Harbor. Here we rented a tandem kayak and left the harbor mid morning under cloudy skies with temperatures in the low 60s.

Boston Harbor sits on Dofflemeyer Point at the north end of Budd Inlet. From there we continued into the Squaxin Passage and traversed a 1.7-mile open water stretch to Hunter Point on an appendage-like peninsula. We continued along the shoreline for 1.2-miles, passing by a marooned boat and several beach homes. From there we bridged the .8-mile gap to Hope Island and pulled into the Hope Island Inlet.

This inlet changes considerably throughout the day due to the tides but when we pulled in the tide was fairly high, making it easy to pull the kayak ashore. As we entered the calm inlet we were greeted by two hungry raccoons combing the beach for tasty crustaceans. The waters edge was a mix of silt, crushed shells and smooth pebbles. Further interior the ground was covered by succulent Pickle Weed, which was shadowed by draping Madrones and pillar-like conifers. We left the paddles behind and hit the island trails.

We started from the group campsites, which were situated on grassy knoll, and then ran over towards the caregiver homestead. The homestead consisted of an old house and several outbuildings with abandoned antique farm equipment. There were remnants of old gardens and even an apple orchard where we saw several Black-tailed Deer foraging. As we continued down the trail and into the forest our surroundings grew wilder. The canopy of Douglas Fir, Hemlock, and Western Redcedar stood as columnar pillars over the sprawling vegetation which consisted of the typical PNW suite: Salal, Sword Ferns, Vaccinium, and Oregon Grape.

Since the island is only 106-acres it can be circumnavigated by foot in 1.1-miles. What Hope Island lacks in size it more than makes up for in character which is showcased by old growth forests, secluded beaches, healthy wetlands, and even a unique 20th century settlement. The trail is well groomed and easy to follow and there are also a few offshoots down to beaches and boardwalks.

Following our circumnavigation on foot we got back in the kayak and paddled 1.8 clockwise miles around the island. As we transitioned from the south side to the western shore the passage changed from Squaxin to Pickering. The western shore had the most beachfront real estate of the island, which foraging raccoons fully utilized. As we passed by the northern horn of the island the landscape changed from pebbly beaches with overhanging Madrones to rockier slopes. Along the eastern shore we had views of Squaxin Island and passed over some fallen Douglas Fir Trees covered in Kelp Crabs just below the surface of the water. Even after the trees death, it continues to provide shelter to animals in the aquatic setting!

Once we reached the southern part of the island we turned back towards Boston Harbor and made the 3.7-mile journey back to the docks. As we paddled south we were treated to excellent views of the capitol building with impressively green Capitol Peak State Forest looming in the background. In addition to the scenery, we enjoyed watching playful Harbor Seals, diving Loons, floating Pigeon Guillemots, flapping Cormorants, and gliding Herons.

After about four hours of kayaking and running we ended our adventure back at Boston Harbor and returned our equipment. Before ending the adventure we took a second to admire the Giant Plumose Anemones that had attached themselves to the dock. Their vibrant white tentacles swayed in the current and we reluctantly returned to land and made our journey back to the Alps.

Even though this kayak trip was not quite as grand as our Cypress Island circumnavigation, it was still a unique adventure. I enjoy any opportunity to use the sea as a means of exploration. Because I spend so many hours in the mountains, I often forget that the Pacific Northwest waterways are just as beautiful and inviting.