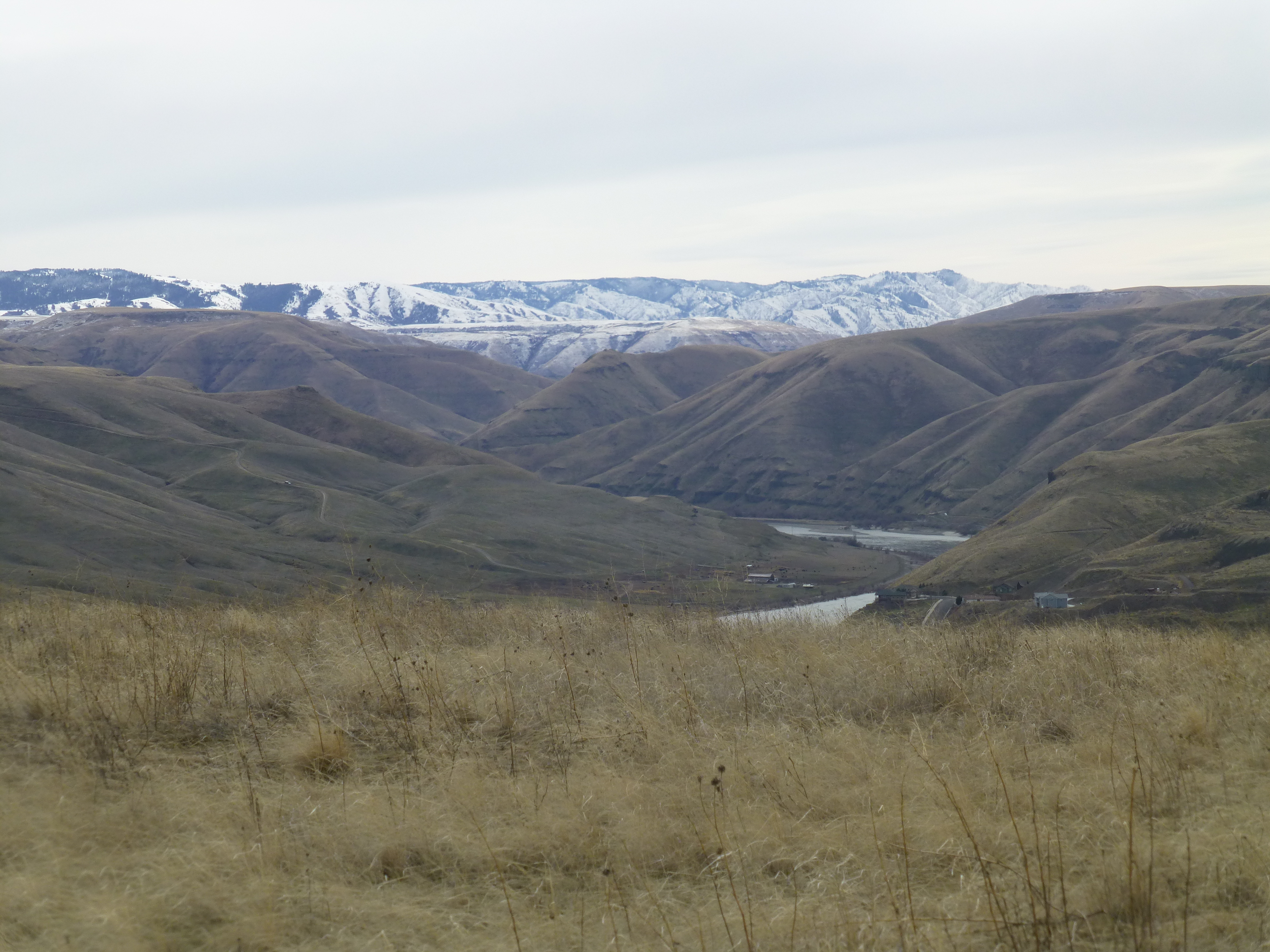 On February 28th, Apryle and I headed south to Lewiston on a whim, thinking that we might find a suitable location for a long trail run. As it turns out, we descended into a canyon referred to as the banana belt of the Pacific Northwest. Lewiston is situated on the border of Washington/Idaho and at the confluence of the Snake and Clearwater Rivers. Despite the fact that there was several inches snow on the ground in Pullman, 45 miles to the south in Lewiston, the ground was snow free and temperatures were about 20 degrees warmer. We continued past the town to Hells Gate State Park, there we purchased our Idaho State Park pass and hit the trails.

The park is flanked by the Snake River to the west and miles of rural agricultural land to the east. The crescent is managed by Idaho State Parks and Army Core of Engineers and covers 960 acres of a former Nez Perce village. The orderly town of Asotin is ever visible across the river giving an interesting dichotomy of wilderness and civilization. Even the park itself has an eclectic mix commercial activities including two visitor centers, an archery range, a boat launch, a sand beach, a campground, and even a disc golf course. However, the biggest draw for Apryle and I was the single track, the elevation, and the vast sweeping views.

Hells Gate is the entrance point to the deepest Canyon in North America, which I first observed from Heavens Gate Lookout seven years earlier. Even though Hells Gate State Park is much less grand, it is still a worthwhile place to explore. The landscape is made up of stair stepping ridges that are blanketed in grasses. There is an occasional shrub lined gulch carving its way down to the river below, but perhaps the most impressive architecture of the park is the towering Basalt formations and petroglyphs at waters edge.

Between February 28th and April 4th, Apryle and I ran the trails of Hells Gate 6 times totaling 121 miles, 22 hours and 24,224 vertical feet; constituting the majority of our long runs for the spring training season. Hells Gate became our home base for running and the park employees began to expect our weekly visits. Typically spending between 3 to 5 hours per visit we began to learn the area intimately.

Gun Powder Ridge: Starting in a grassy pasture, the trail bypasses a deep gully teaming with riparian plant life. Then makes a switchback at the road before traveling through a protected prairie zone. The trail comes to a fork with the wide Easy Street Trail and the Powerline Trail. The Powerline Trail then zigzags its way up toward Warren’s Ridge.

Power line: This trail is marked by gradual upward progress and is often a popular spot for darting Meadow Larks and soaring Golden Eagles and various Buteos. From the Powerline trail, there is an option to take Griffins Cutoff to Charlie’s Peak Trail or to take the Everest Trail over to Kip’s Cutoff or to simply continue switching back up to Warren’s Ridge.

Warren’s Ridge: This is one of the longest unbroken stretches of trail which offers views of surrounding landscape. The hallmark of this trail is the unrelenting wind sweeping over the stark grassy ridge. From Warren’s Ridge, both Devil’s Slide and Kip’s Cutoff can be reached.

Devils Slide: This is the steepest stretch of trail in the park and offers the best view of the Canyon to the south. The snow capped peaks bordering the river dominate the backdrop of this trail. Sections of this trail give the illusion of remoteness in the narrow swath of land.

Everest Trail: One step down from Warrens Ridge, the Everest trail provides a more sheltered and undulating option to reach Kip’s Cutoff or the aptly named Jawbone Trail. This trail is possibly the most technical section with some jagged rocky stretches.

Kips Cutoff: Short and steep, this narrow trail carves its way up through a small canyon lined with shrubs before meeting up at the junction with Warrens Ridge and Devil’s Slide.

The Rollers: An undulating trail that skirts along the last rock outcrop before dropping off into the river below. From this trail the River Run, Sundown and Old Billy Trails are accessible.

Charlie’s Peak: Yet another NW/SE oriented trail that leads to a karin and a bench at an arbitrary point referred to as Charlie’s Peak.

Laurel Vista: A unique cutoff trail that connects The Rollers to Charlie’s Peak. This is a narrow rutted trail that is densely bordered by prairie flora.

River Run: Perhaps the most unique trail of the entire park, this trail is bordered by the Snake River and the impressive Basalt Towers. The rock formations are mesmerizing and as if the formations themselves were not amazing enough, there are also petroglyphs in an overhanging section. Be on the lookout for waterfowl and whistling groundhogs.

Sundown Trail: This trail connects The Rollers to the visitors center and passes by the campground. The trail consistency is sandy and there are also some low growing trees that are inhabited by perhaps the largest Northern Flicker Flock I have ever seen.

Endurance Trail: This gravely trail makes a trapezoid loop which connects to the Sundown, Easy Street and Winchester Trails. This menagerie of trail offers a glimpse into what I assume is Army Corps of Engineers restoration projects (though I cannot be certain as there is not much in the way of interpretive education signage). There are some cut Junipers strung on posts, creating what looks like a lean-to, presumably creating bird habitat.

Winchester Trail: A narrow trail that connects a horse trailer parking area to the Endurance trail and passes by another visitors center.

Easy Street: A connector that runs perpendicular to most trails starting from the Tammany Creek Road and eventually ending at the campground by the Snake River.

Old Billy: An uneventful trail which parallels Easy Street about 2 feet away. It is slightly more narrow but otherwise seems unnecessary.

Griffin’s Cutoff: A short trail that connects Powerline to Charlie’s Peak. This is another uneventful trail that simply bridges a gap.

Although there is probably less than 7 miles of unrepeated trail, the unique landscape lends to several hours of entertainment. Take the time to observe the surroundings, locate the Osprey nests, marvel at the petroglyphs and rock formations, savor the views of the snowcapped peaks to the south, drift away with the northward flow of the Snake River. Stop into the visitors center and read the history of the area in the context of the Lewis and Clark Expedition. Orient yourself on the large raised  topographic map and appreciate that there is so much too see and so little time on Earth to explore it. The prospect of being bored on such an interesting planet is asinine.