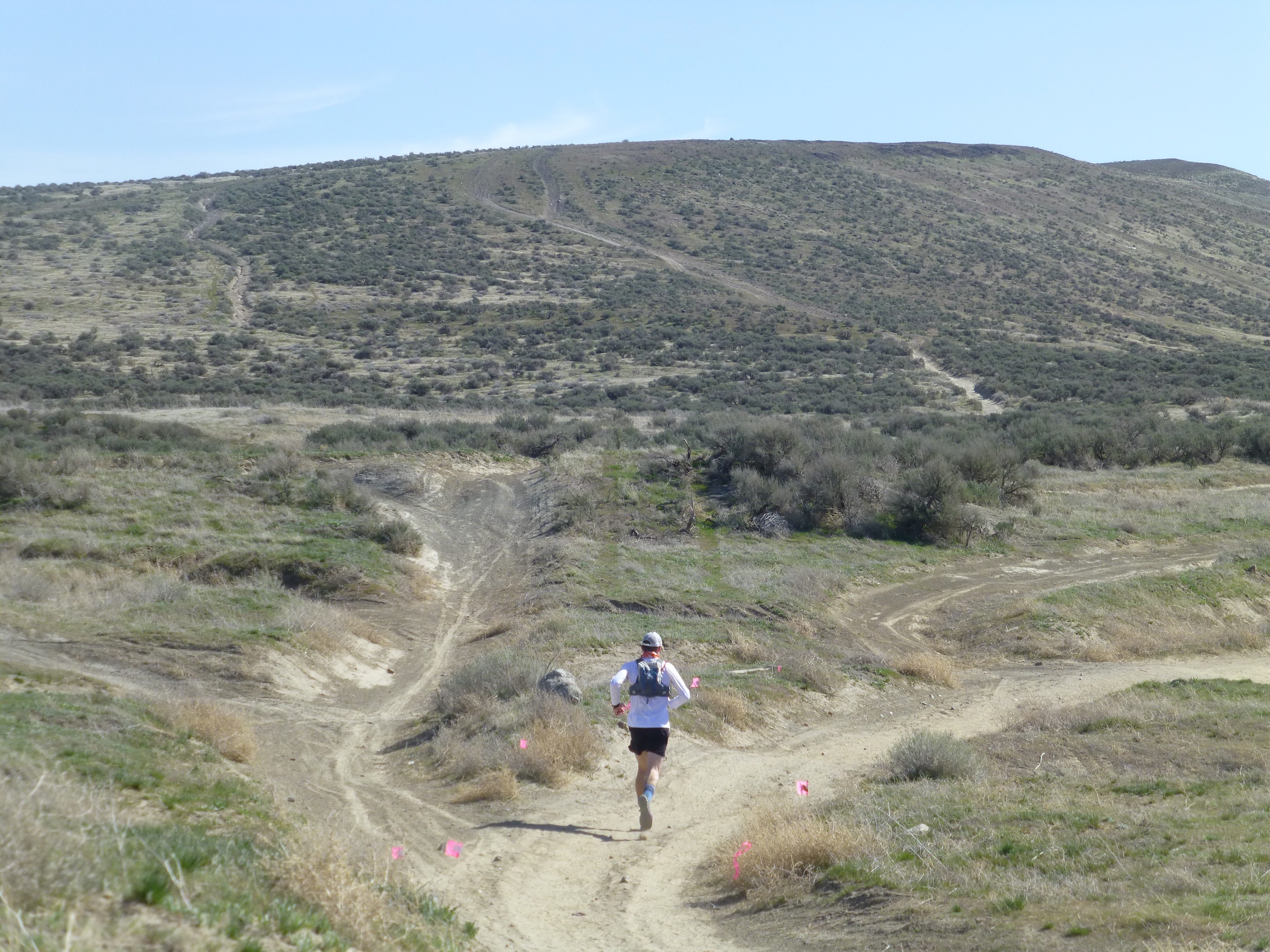 I signed up for Badger Mountain shortly before registration closed and was at the bottom of the waitlist, but by the final week leading up to the race, I was offered a spot at the start line. Apryle reserved us a cabin in Kennewick where we stayed the night before and night after the race. It was our first cross state trip in over a year and we made the trip with our Blue Headed Pionus, Green Cheek Conure and one of our Budgerigar Parakeets that needed twice daily antibiotics.

Shortly after arriving in the Tri Cities, Apryle and I scouted the first part of the course and ran a loop around Badger Mountain. The semiarid landscape was far different than the lush green surroundings of western Washington, but we were familiar with the conditions having lived in Tonasket, Washington for six months in 2016. The weather forecast for race day called for sunny skies with temperatures ranging from low 30s to upper 60s.

Because of COVID precautions, runners were tasked with signing up for wave start times, I picked the latest start time so that I could not be passed by someone that started later and also so that I would have runners to chase throughout the day. However, time slots were added after me and I ended up starting somewhere in the middle at 7:37AM. However, it ended up working out okay and I was able to start along side frequent training partner Paul Young.

For the race I chose to where my shorts with four pockets to cache 8 gels, my white long sleeve shirt to shield myself from the sun, my buff to use as a mask, and my peregrines to protect my feet. I used my ultimate direction vest so that I could carry a 2-liter water bladder, which was filled with about 800 calories of tailwind.

Paul and I started off running a fairly mild pace up to the top of Badger, winding through sagebrush-covered slopes. We ascended about 800 feet in the first 2 miles and then bombed down the hill in about 5:40 pace where we popped out on a paved road. We crossed a highway and then began the switch-backing ascent to the summit of Candy Mountain. After another 700-foot climb we made a quick one-mile plunge to a culvert that passed under E Jacobs Road NE.

Paul and I kept an even pace along E Jacobs Road NE from mile 7.5 to mile 10. I ran through this aid station because my hydration bladder still had plenty of water. I passed through mile 10 in about 71 minutes, a little quick, but it felt comfortable. The next 7 miles were slightly undulating, but mostly flat through the Goosehill vineyards. The wide stone trail transitioned to a dusty single track around mile 13.5, which is also near the third aid station. Paul and I caught up to Rob (winner of the 100 miler and fellow Issaquah resident) and Bret around mile 14, chatted briefly and then continued onward. It was revitalizing to see some friends on the trail.

Around mile 17.3, we rejoined E Jacobs Road NE, before turning onto Webber Canyon Road, which we took up to the McBee aid station. I refilled my hydration bladder for the first time at McBee at mile 18.5, just in time for the longest climb of the day. It was a steep 1400-foot ascent and I took it as an opportunity to eat an avocado quesadilla. Upon reaching the top Troy was there to provide some support which was a pleasant surprise following the arduous climb. Despite Goosehill vineyard being fairly warm, the 4.5-mile ridgeline to Chandler Butte was windy and relatively cool. We were treated to distant views of Mount Rainier, Mount Adams, Mount St Helens, and even Mount Hood.

At the mile 23-turn-around point, Paul stopped at the aid station and I continued along the ridge. During the out and back section, I caught a glimpse of all the runners chasing. Paul rejoined me shortly before the only looped section of the course, which was a smooth sandy switch-backing single-track descent. The temperature gradually increased as we lost elevation to the McBee aid station at mile 30.3 (4 hours and 12 minutes).

As we bridged the gap to Goosehill vineyards Apryle was there to cheer us through along the road section. Paul was setting an impressively quick tempo through this section as we chased down the remaining people in front of us. They were likely behind us on time since they started earlier in the day, but we still wanted to catch them just in case. We reached the mile 40 aid station in 5 hours and 28 minutes, meaning we had only 1 hour and 45 minutes to cover the last 10 miles in order to stay under course record pace.

I refilled my hydration bladder for third and final time and hit the swelteringly hot road. Paul pulled away a little and I could not turn my legs over any quicker. I was able to catch Paul on the ascent to the top of Candy Mountain but once the downhill started Paul dropped me and put in an excellent finishing kick. Third place finisher Dan also passed by me in this section and I was fading fast. I ate some energy chews and almost immediately started picking up the pace. Apryle was also at the base of Candy Mountain, which gave me another boost of energy. I walked/jogged to the top of Badger Mountain where Troy was there cheering once again. I mustered up an 8:15 per mile pace to finish out the race in 7:07:35 (1 hour 39 minutes for the final 10).

I ended up finishing second to Paul, who put several minutes on me in the final 6 miles of the race. However, I was very excited to break the previous course record. It was an excellent way to reenter the racing scene following a year that was postponed due to COVID. I feel like it was my best race since White River 50 in 2017.

Thank you to the race directors and volunteers for putting on a fun and safe event. Also thank Paul Young for sharing 44 miles and Apryle for the support before, during, and after the race!

~1600 calories of tailwind and heed

~800 calories of gels and chews