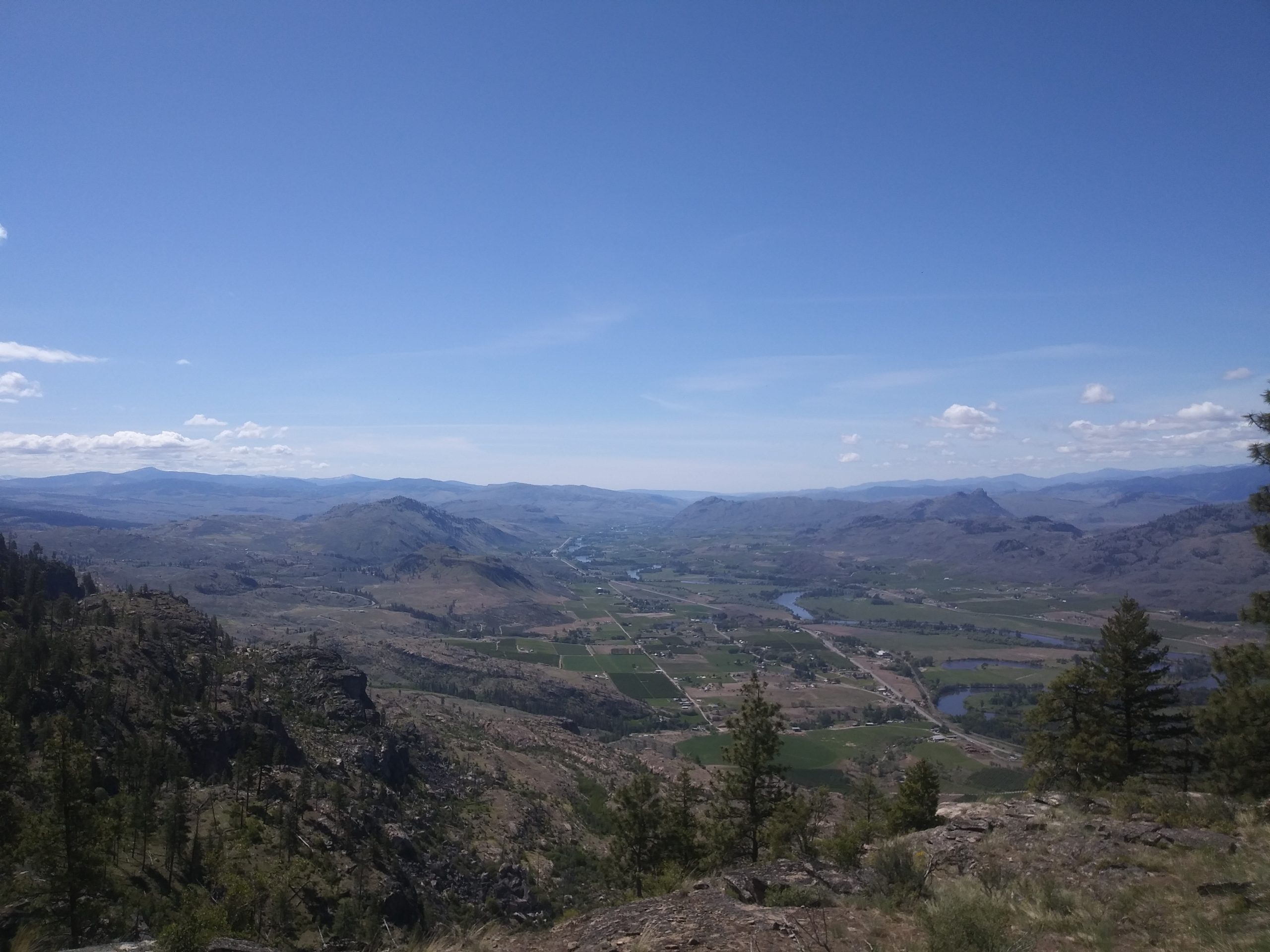 Shortly after the springtails and isopods arrived for Chester the Crested Gecko’s bioactive vivarium, I loaded up Bella the Blue Headed Pionus and Darwin the Green Cheek Conure and we drove up to the small town of Ellisforde midway between Tonasket and Oroville, where Apryle was staying while she completed her fieldwork. It was a pleasant drive over to Okanogan County as usual, watching as the ecosystem gradually changed from the walls of green conifers to the golden hues of the sagebrush steppe. The parrots enjoyed their car ride, as they gazed out the windows and munched on pellets and their red and yellow pepper salad. Their contentment was only occasionally interrupted by a large raptor flying overhead. We reunited with Apryle around 4 in the afternoon and Darwin punctuated the excitement with gleeful shrieks.

I went for a brief pre-race run up the steep Swanson Mill Road and took in the sites and sounds of the Okanagan Valley. The setting sun illuminated the rolling hills that ascended to the towering craggy rock scape of Whistler Canyon. The stunning views of the canyon were only exceeded by the dramatic Pasayten Wilderness peaks that stood guard over the Okanogan River Valley below carving through orchard country. It was comforting to be back in the place that I called home for the latter six months of my first year in Washington.

Whistler Canyon is a very unique place because there are so many different ecosystems within the boundaries and has such a rugged remote feel. The Okanagan Valley is a sagebrush steppe and has a semiarid climate. The summers are dry and hot and the winters are wet and frigid. This feature makes this valley very appealing for fruit orchards with most of the state’s apple, pear, and cherries grown in this area. Therefore the opening miles of the run feel as though you are running through a desert with craggy cliffs surrounding you. The tan cliffs are contrasted by dark green Ponderosa Pines and pale green sagebrush.

On the drive up I scanned the radio for a motivational song but due to the limited radio selection in Okanogan County there were only two stations that I found enjoyable to listen to: The Quake (classic rock) and a pop station. Since the classic rock station was on a commercial break, I elected to deviate from my favorite genre and try the pop station. Therefore I was stuck with a marginal pop song in my head for the duration of the run; I Can Dream About You, by Dan Hartman.

I began my journey just after 8 AM and the temperatures were in the upper 50s but with the rising sun it felt much warmer. Compared to my fastest ascents of the canyon, I started fairly mild, but it was still a pushed pace. I scanned the area for my favorite North American land mammal, Bighorn Sheep, but did not see any. I had seen the elusive creatures back in December of 2016, but not again since in the canyon. I did not look behind much, but when I did the views of the Okanogan Valley and Pasayten Wilderness were spectacular.

I reached the Black Diamond Lake junction at mile 2.25 in 22:53 and at that point the trail and my surroundings gradually change from Sagebrush steppe and craggy cliff sides to conifer forest with thick under story consisting of ocean spray, roses, California lilac, serviceberry, bearberry, and snowberry. The trail was almost closed in on each side by encroaching vegetation, but it was certainly passable. Also since this was the first time that I had run the trail in mid-May, the overall conditions of the trail were much different. In April, there is often still lingering patches of snow, and in July/August the trail is dry with scant running water. However, on May 13th the ground was saturated and there were numerous vernal streams and pools. There were sections of the trail that had streams flowing over the trail. I also encountered several piles of moose scat indicating that the large ungulate was present in the area fairly recently.

In fact this area has such a rich abundance of wildlife you can spot most of Washington’s animals around this trail system. Within this protected area there are bighorn sheep, elk, moose, mule deer, black bear, cougar, and rattlesnakes. In fact on May 14th 2003, almost 18 years ago to the day, there was a potential Grizzly Bear sighting a few miles to the northeast in Chesaw. Wolves are nearby, which is what originally brought us to the region with Apryle’s research. The abundance of wildlife is likely due to the remote rugged nature of this land as well as the numerous natural springs. In addition to the potential wildlife dangers, the surrounding landowners tend to value their privacy and therefore I do my best to remain on the trail.

I reached the McDonald Junction at mile 4.4 in 41:48 and then continued up the trail where the dense forest gives way to an open lookout with even more spectacular views. I did not take the time to enjoy the views and instead took advantage of the smooth trail to increase my pace. The trail is fairly easy to follow during the daylight hours; however, at night it would be difficult because the trail is not well worn. It does follow a very natural progression as it weaves its way to the Wild Horse Springs junction. I reached the junction at mile 8.5 in 1:14:44, at which point the FKT route deviates from the logical option of following the main Whistler Canyon trail and instead veers right onto the slightly less maintained Wild Horse Springs trail.

I was feeling very good, the pace was strong and I was keeping up on my hydration and nutrition. However, the trail ahead was full of down trees and sizable pools of water on the trail, which thrust me out of my groove. Then at mile 10.3, disaster struck. I made a route finding error, despite having run the route multiple times and even marking the very section for my race. My mistake cost me one mile and about nine minutes overall. Basically I missed a key left turn and at first continued down to the forest service gate. I realized my error but backtracked a little too far, but I finally uncovered the narrow single-track path with the miniature sign indicating WHS.

I was distraught about missing the turn and it took me a while to find my rhythm again. The rest of Wild Horse Springs traverses a relatively sparse ponderosa pine forest. It is fairly fast running and I was pushing hard to break the 2 hour mark for the out portion of the out and back. I ended up punching the clock at 1:59:57 for 13.8 miles, handily beating the previous FKT, but I was still disappointed knowing that I could have done it about 10 minutes faster without the wrong turn. I could not dwell on the negatives though and continued into the parking area for good measure before making the turn around to complete the double traverse.

At the turn-around the temperature began climbing into the 80s with the sun burning through the sparse cloud cover. I started the run with about 2 liters of water with = 700 calories of tailwind, and about 6 gels. At the midway point I was about midway through my supplies and my body and energy was fading. Fortunately the trail back to the Whistler Canyon trailhead trends mostly downhill. Therefore it was quite easy for me to negative split this run despite putting in a less effort than the first half.

Once again on the way back I watched as my surroundings transitioned from sparse ponderosa/aspen forest to thick larch and fir forest. The route was very easy to follow in the opposite direction and I was clicking off quick splits, while the lyrics (I can dream about you) moving sidewalks, I don’t see under my feet cycled through my head at an annoyingly consistent pace. I reached the Whistler Canyon junction at mile 18.3 in 2:39:07. At that point I knew that I would easily break 4 hours for the out and back. So when I reached the overlook I actually took a minute or two to snap some photos and enjoy the view. As I peered out over the Okanogan Valley, I was overcome with happiness that things had come full circle in my relationship with the Whistler Canyon trail network.

The last checkpoint was the McDonald junction at mile 22.4, which I reached in 3:13:25. From this point the trail takes a more dramatic dive from 2,850 feet down to the canyon floor at 1000 feet. The dense larch and fir forest yielded to the craggy canyon again and I bounded down the switchbacks towards the Whistler Canyon trailhead. When I reached the final turn towards the parking area I had to jump an angry Rattlesnake, but other than that the second half of the run was routine. I reached the finish in 3:46:45, setting a new FKT for the Whistler Canyon double traverse.

Overall I was very happy with my effort in nabbing two FKTs in one run. This run came just a few days after a win at the Cougar Mountain 10.8 miler, so I was pleased with my body’s ability to recover. I drove back to our cabin in Ellisforde and I enjoyed the rest of the warm day on the patio with the parrots watching as the many unique bird species of the valley flittered around us.

It was an excellent experience getting back to one of my former stomping grounds in Okanagan County. Whistler Canyon has always been very special place to me and it is certainly an honor to hold the fastest known time on the traverse and double traverse. Although I love living in Issaquah, there is always a part of me that will miss the remote rural town of Tonasket. Apryle and I celebrated her successful fieldwork and my FKT with a little live music at Esther Bricques. Local artists Rockin’ Robin and Angela Cross did some excellent classic rock numbers capping off a successful trip to the Okanogan Valley.