Trampled Underfoot: Slugs of the Issy Alps Part I 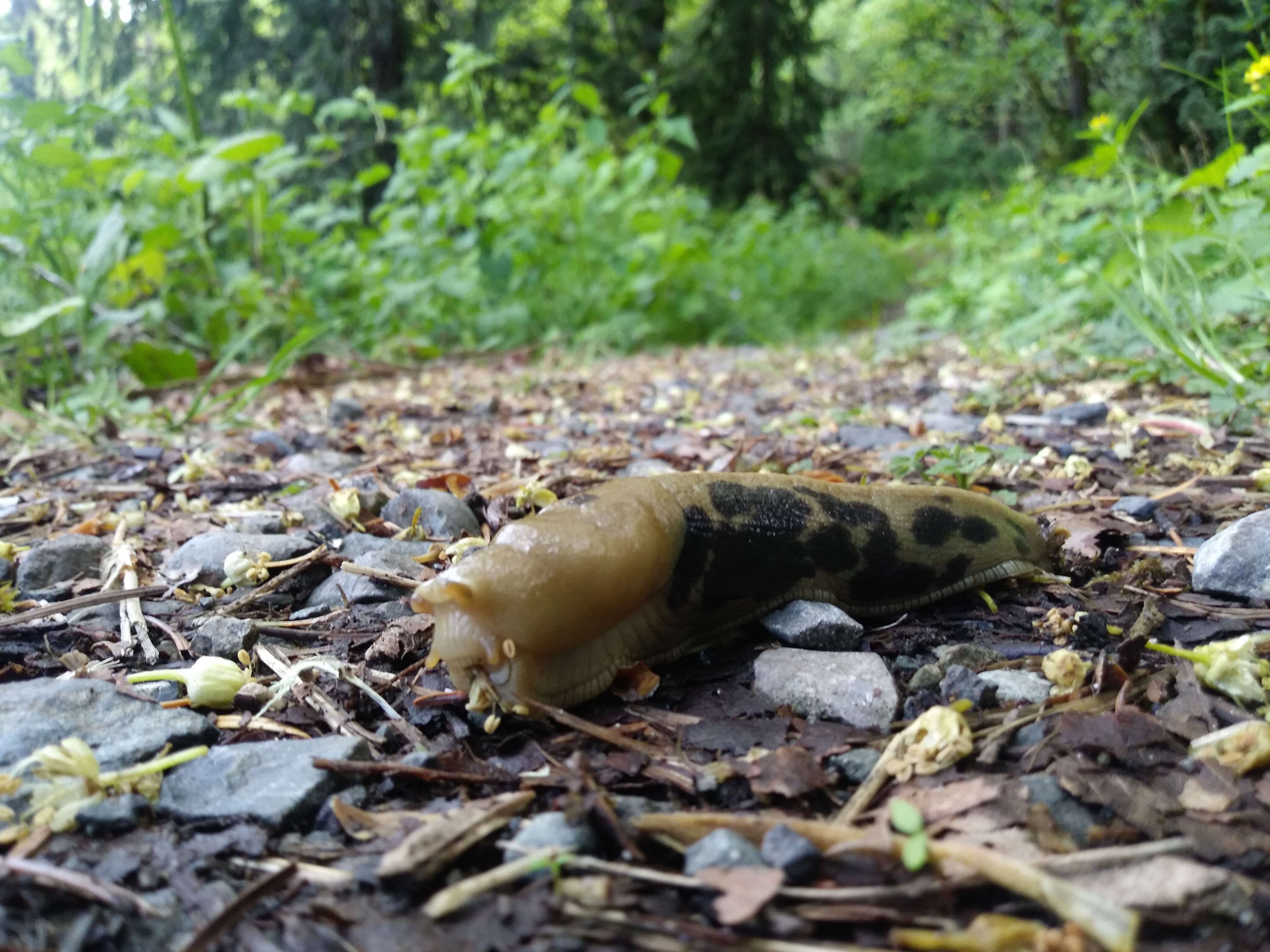 In addition to the beauty of the landscape, brilliance of the foliage, and the pleasant feeling of fresh air, running also affords me the opportunity of seeing numerous creatures occupying wild areas. I typically get very excited about a bobcat or bear sighting, but there are so many other unique creatures roaming the Pacific Northwest that often get lost under the ferns and salal. Sometimes these creatures may even be crossing the trail right in the open and we don’t even give them a second glance. In this particular post, I am referring specifically to the local terrestrial gastropods – slugs and snails.

Snails and slugs belong to the phylum Mollusca, which has the second largest number of extant invertebrates (85,000). Mollusca contains seven classes, snails and slugs fall under class Gastropoda, which makes up 80% of species in the phylum. Snails are typically characterized by a single, spirally coiled shell, which is large enough for the soft mass to be withdrawn. Whereas Slugs have an internal or reduced shell and are more exposed to predation and desiccation. Both snails and slugs posses a muscular foot which helps them to creep along the forest floor. I have been intrigued by these unique little creatures since I was a child and living in the gastropod-dense Pacific Northwest has only further increased my curiosity.

With so many species of gastropod, it is difficult to reign in the focus, but I will highlight a few key genus that I have seen on a day to day basis in the Issy Alps. I think the most charismatic of the slugs in my backyard are those in the genus: Ariolimax, more commonly referred to as banana slugs.

On a typical run in Tiger, Squak, or Cougar from February to November I see anywhere between 10 to 25 Pacific banana slugs creeping across the trail. I view them as the quintessential invertebrate that has adapted perfectly to life in the Pacific Northwest and I always try to appreciate their space and allow them to move safely across the forest floor. In addition to their vibrant coloration and novelty size, there are many other interesting characteristics that make the species so interesting.

Banana slugs are a native of the Pacific Northwest, and tend to keep to the forested landscape, however, there is a similar looking invasive slug referred to as Arion rufus (Chocolate Arion). Arion rufus was introduced to the Pacific Northwest from Europe in last century. There are researchers currently studying whether the invasive Arion species may outcompete the native Ariolimax and lead to an extirpation of the beloved banana slug. The fear is that perhaps Arion might be more drought resistant and a more generalist feeder. There are several different morphs of Arion, the black morph tends to prefer wooded areas and the brown morph tends to prefer grasslands.

At any rate, if there is a slug in the garden it is more likely a non-native slug because the banana slugs tend to prefer landscapes less impacted by human development. In addition to being outcompeted for resources, banana slugs must also remain vigilant to avoid the fearsome Limax maximus (leopard slug or giant garden slug). This slug will actually chase down and try to bite and kill the more docile banana slugs.

Stay tuned for the second installment about snails of the Issy Alps.