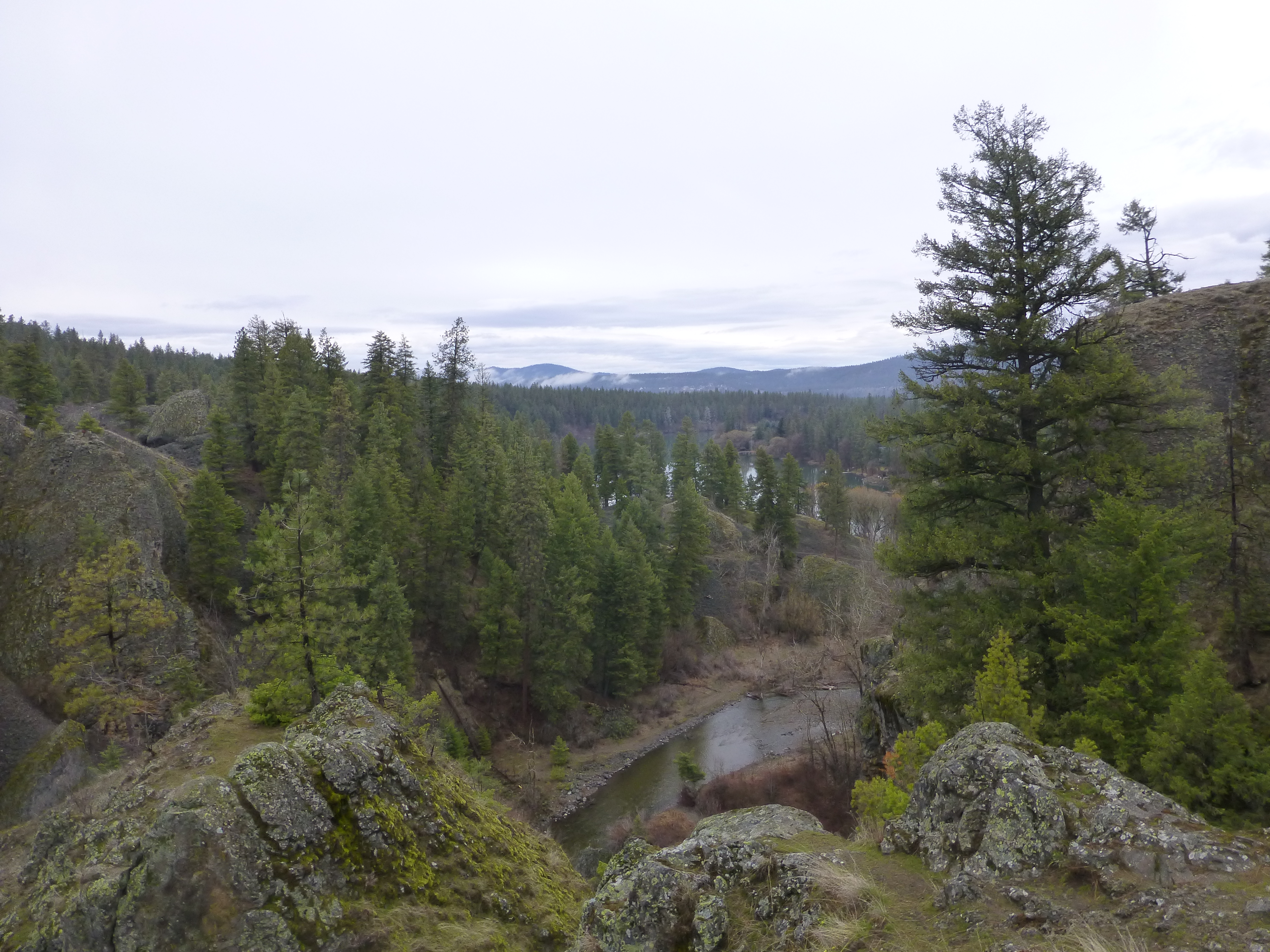 Spokane offers immense trail running opportunity; however, due to spacial and temporal factors, Apryle and I were only able to explore two parks of interest in the area. The first was a natural area sandwiched between residential neighborhoods and the second was a State Park flanking the Spokane River. In this post I will explore our two journeys to the Spokane area and provide a little history for good measure.

Immediately following our discovery of Hells Gate State Park on February 28th, we switched gears and headed north to Spokane to begin the month of March. This was due in large part to the snow volume in Pullman, necessitating that I obtain new tires for the Versa and Spokane offered the most competitive pricing. Therefore, we decided to run at the most logical natural area that was nearest to the tire shop; which happened to be Dishman Hills.

Dishman Hills is a total of 1233 acres and is separated into non contiguous units. The particular one that Apryle and I chose to explore was Iller Creek which makes up 966 acres of the total area. This unit is quite popular due to its granite monoliths and excellent views of the Spokane Valley as well as the Palouse.

The approach to the trailhead on Stevens Creek Road is quite circuitous as it meanders through miles of suburbia before finally giving way to a large swath of forested undulating landscape. The pseudo isolation of the conservation area makes this an excellent urban getaway. Upon entrance to the park the trail is quickly swallowed up by towering conifers and babbling streams which parallel the path.

From the trailhead it is a steady upward climb to the unique towering granite monoliths near the highpoint. Because Apryle and I chose to explore the park in March, there was a substanial amount of packed snow on the trail and the surrounding area. However, it made for easy running and the weather was quite pleasant, much to our surprise in a forecast that called for rain. We started up the West Fork of Iller Creek and after reaching Big Rock Apryle and I descended back to the car.

However, in order to get more miles I made a second trip up and this time took my chances running through the snow to locate the more inconspicuous East Ridge trail. After only about a 400 meters of postholing I located the trail and picked up the pace along the ridge. This section was quite picturesque with snow clinging to the towering pines around me.

Then at about 8.2 miles into the run I came within 10 feet of a small moose. I jumped into a snow bank to my left to avoid provoking him and after stumbling through knee deep snow and bushes I jumped back onto the trail and walked away slowly. As soon as he was out of sight I bounded down the trail in hopes he would not chase me. In hindsight he was probably not interested or intimidated by my presence in the least, but you never can be sure with such an aggressive ill-tempered ungulate.

My surroundings switched to willow thicket and narrow switch backing trail back toward the start. Here I was rewarded with excellent sweeping views courtesy of an old fire which cleared the area. With the dense willow thicket I was quite concerned that I would run into another Moose, but fortunately I was lucky and make my way back to the car just as the rain began to fall.

On March 22nd it was time for Apryle’s big long run; and she had Riverside State Park on her list for over a month. Therefore there could be only one place to knock out the miles and that was at Washington’s largest state park. The park covers over 14000 acres and borders the Spokane and Little Spokane River. The vegetation is predominantly mixed Ponderosa Pine forest with the usual spread of inland northwest shrubs covering the ground.

We started the on the east side of Deep Creek and then ran over the mild trail that carved through the Ponderosa forest creating a triangle between the Nine Mile Reservoir and W Seven Mile Road. Then after locating the Centennial Trail Bridge we crossed the Deep Creek and began the climb on the west side which meandered through interesting crumbling rock formations. After emerging from the forested trail we arrived on top of a wide plateau which offered views of the Deep Creek Gorge and Bowl and Pitcher Formations.

Though we only explored a small fraction of the parks 40 miles of trail, I believe we saw the most interesting sections. The peaks and valleys on the west side of Deep Creek offered a geological spectacle that I had not yet experienced and the gentle terrain of the Ponderosa Forest on the east side made for a manageable long run. Between the Dishman Hills and Riverside State Park I am confident that we experienced some the best that the Spokane area has to offer.