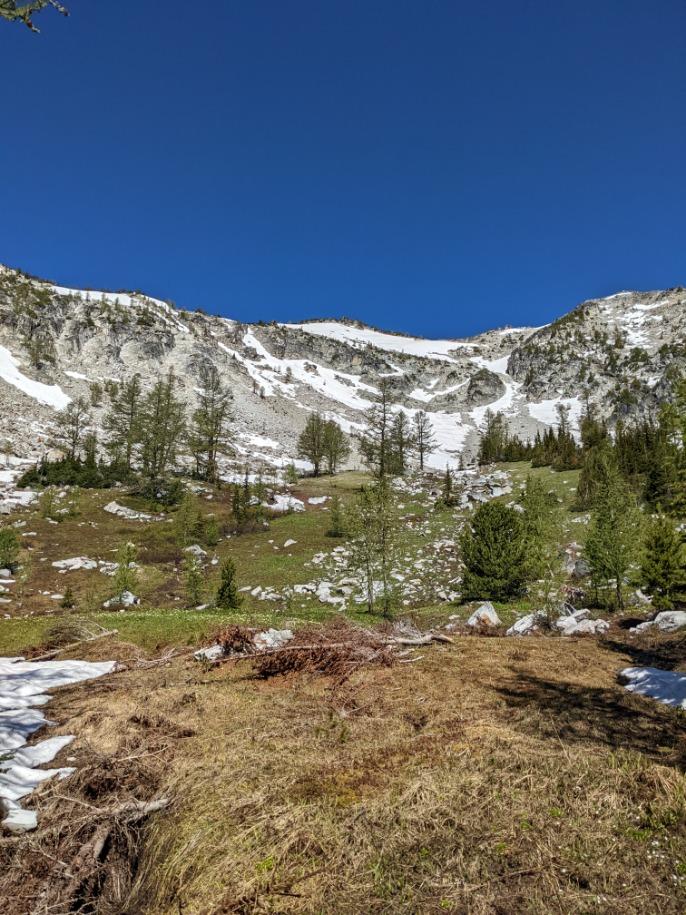 The Sawtooth Ridge 50 miler was the hardest 50 I have ever run and it took place only 2 months after the previous hardest 50 miler I have ever run (Bloodroot 50). The race was initially scheduled for July of 2021, but because of the excessive heat warnings, the race was postponed to July 9th 2022. In a humorous turn of events the race had to be rerouted this year because of excessive snow… At any rate this would be my first run in the Methow Valley and I was excited to explore the area and challenge myself over difficult terrain.

Apryle and I left late in the evening on Friday July 8th and arrived at the start/finish area at Foggy Dew Campground near midnight. We quickly setup camp and immediately fell asleep. I awoke about an hour before the start of the race to the sound of the rushing waters of Foggy Dew Creek. The race got underway at 6AM and I took the opening miles very easy in a group of four people (Izzy Ray, Bruce Ronek, and Drew Mueller). We chatted as we trotted up the smooth gravel Gold Creek Road.

Generally speaking it was a very gradual runnable grade and we reached the aid station at mile 6 in about 1:02:28. I grabbed a few pieces of fruit and transitioned onto the Eagle Lakes trail. Here the group was whittled down to Drew, Bruce and myself. We ascended up through a forested hillside before reaching an exposed scree slope with beautiful views. I passed through another aid station and the trail continued up to an arbitrary turnaround point at mile 12.7 (7,367 feet). I reached this point in 2:23:57 and Bruce snapped a few photos and then we were off on our way back down the hill.

Bruce took off on this decent and I chased, leaving Drew behind. The following miles were a little tedious, I could not catch Bruce and I had isolated myself in a lone chase group. I made it back to the start of the out and back (17.2 3:02:00) and took the Martin Creek trail southwestward. At this point the descent ended and I began a gradual climb back up to the next highpoint on the course. The trail was smooth and switch backed through the forest. After a few miles the trail reemerged above tree line and into snowfields.

The next high point was near Cooney Lake at 7,047 feet (23.3 4:23:03). The trail began to descend again and Drew had caught up and the two of us began to pace together in an effort to pull back Bruce. We transitioned onto the Foggy Dew Creek trail at 25.9 miles (4:52:15) and I stopped to refill my hydration bladder and grab some snacks. The trail was more or less a gravel forest road and Drew and I set a good tempo. We reached the low point at mile 32.1 (2,935 feet in 5:44:38). We blew through the aid station since I had just filled up 6 miles earlier and the next aid station was advertised at mile 39. After crossing Foggy Dew Creek we began our second out and back, and I was feeling very confident to finish out the final 18 miles strong. On paper the last two climbs looked very easy compared with the first two climbs of the race. However, coach Apryle told me to not discount those last two climbs because they may look lower and shorter but the grade was probably going to be tough. She could not have been more correct, the third major climb was the toughest of the day and Drew and I were relegated to a hike.

The trail was steep, dusty, narrow and is not even shown on the map as being an official trail. It took us until 7:16:18 to reach the highpoint on the climb (36.7 and 5,923 feet). By our estimation it would be a ~3 mile descent and then an aid station before the return journey.

The ensuing descent was painful… The gradient was 15-20% and reached a low point at mile 39.6 (3,272 feet) with a small stream crossing. At this point I had been out of water for about 2 miles and we had already passed the advertised distance for the aid station. However, for some reason I did not fill up my water bladder at this stream. In this ravine there was no tree cover, only shoulder height shrubs (ceanothis, willow, and grasses). I saw dried Moose scat all over but knew that there would be no Moose to be found in this area in the current heat. The temperatures soared into the low 90s and there was no escaping the sun.

My breaking point was the steep little bunny climb up to another ridge (3,907 feet 40.4), it was only a 600 foot climb but I just sat on the trail for about a minute and Drew pressed forward. I began licking the sweat off my arms and draining my soaked shirt into my mouth. The salt actually tasted good but the sunscreen left a bad aftertaste. I went through short bursts where I ran but mostly I walked the descent to the aid station. I began eating tall blades of grass, this wetted down my mouth and actually tasted okay, it raised my morale and I finally reached the “39 mile” aid station at mile 42.7 (8:53:06).

When I got to the aid station I questioned my ability to continue because I was had stopped sweating, was dizzy and slurring my speech. However, I sat down in the chair and I quickly downed 1.5 liters of water in a matter of minutes. The aid station crew got me cool damp cloths to put on my neck and cooked me some food, while I transitioned to supine on the ground and propped my feet up on the chair. The aid station crew was amazing; they helped to shade me and filled up my hydration pack while I briefly fell asleep. Then I suddenly woke up and started to feel pretty good.

At this time a few other runners trickled in including Izzy Ray, who I shared some miles with early on in the day. I downed some more calories and started back out on the trail. I left the aid station at 9:33:49 elapsed meaning that all in all I spent over 40 minutes at the aid station in an effort to recover. Although mistakes were made leading up to my hydration/calorie deficit, I was proud of my composure and patience at the aid station. I made sure that I was excited to get back out on course before I left.

I was caught and passed by another runner – Timothy on my way back up the final large climb, but I managed to pass him back prior to the summit. It was nice to visit with many other runners on the way back up the mountain and was glad that I did not have to stop at any point on the way up. Once I reached the top of the last climb (49.9 11:51:31) I began to calculate how long it would take me to finish the race. I had already broken my new established record for personal slowest 50 miler, so any amount longer would only build on that.

I reached the last aid station at mile 54.2 (12:44:38) and was told that there was only 2 miles remaining on the forest road back to the finish at Foggy Dew Campground. I was elated to have survived such a strenuous race but still a little disappointed at my time and also that I was dropped by Bruce and Drew. However, I put in a surge to the finish line, closing out the 56.48 mile (16,558 vertical foot) race with a time of 13:01:18.

Thank you to Denis and the Everlong Endurance team for putting on a great race. It was a great course and I really enjoyed the challenge. Thank you to all the excellent volunteers for your help at the aid stations. Thank you John Berta for marking the course. Thank you to Bruce for snapping some photos of me on course. Thanks to Apryle for your support on race day and my training in general.