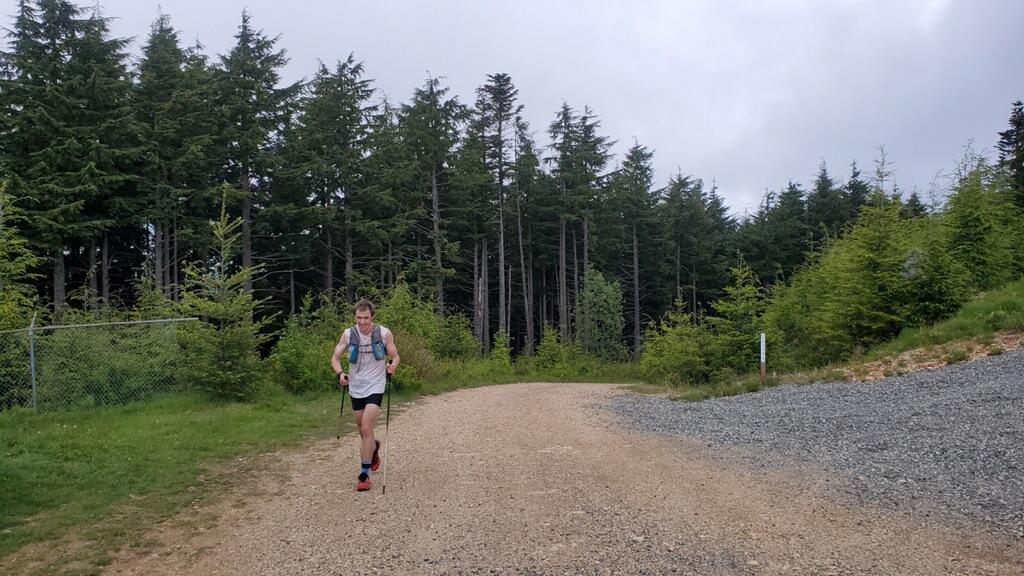 I signed up for the Run for Shoes 50K for the second year in a row. When I ran it in September of 2020, it was shortly after my failed Washington PCT attempt and my legs were fairly tired. Also the air quality was quite poor in the preceding weeks from nearby wildfires. Therefore, I was excited to see how quickly I could run it under favorable conditions and fresh legs. After I ran the course in 5:52:34 last year, I initially hoped to shave an hour off the time this year.

My legs were not completely fresh considering I just completed the Vashon Island 50K on June 5th, however, I still felt in better shape for the run than last year. In addition to the 50K race 5 days prior, Rob Irr and I had a difficult lifting session, which was weighing heavy on my hamstrings. However, I was motivated to put in a challenging effort in the Issy Alps.

The race has always been virtual since its inception during COVID, and has a two-week spread to complete it independently. This year I chose to run it on June 10th. Compared to the hot and dry September version, this year it was a cool and cloudy 51 degrees at the start. Apryle dropped me at the Upper Coal Creek Trail a little before 6AM and Stephane Frion accompanied me for the first 2.5 miles. He kept my pace honest along Coal Creek and I reached Redtown Trailhead 2 minutes ahead (20:37) of my pace from last year.

I ran up the hill from Redtown to Coal Creek Falls and reached Wilderness Summit in 47:42 (7 minute faster) than in 2020. I descended the Wilderness Cliffs to State Route 900 (6.9 miles 1:03:36). Then I crossed the road over to the Margarets Way Trailhead where I met up with Troy Haeseler. Troy and I made it to the top of Margaret’s way in about 33 minutes (mile 9.9 1:36:50). We were pretty excited about the solid ascent and Troy ran back to his car while I continued across Squak Mountain.

I continued to West Peak and eventually Central Peak, which I reached in 1:50:52 (mile 10.9). I continued to shave more time off of my course record from last year and the total was up to 15 minutes on top of Central Peak. At this point I contacted Apryle and Paul Young who were planning to meet me at Issaquah Community Center and told them I would be there sooner than expected. I reached Newport Way in 2:24:12 (mile 14.5) and notified the Run Determined crew via text.

I reached the Community Center in 2:26:38 (mile 14.8) and unfortunately Paul was unable to get there early. However, Apryle was there and she helped me refuel and switch out my hydration pack. When I emptied my pack I saw I had consumed three gels and drank approximately 1.5 L of water with 600 calories of tailwind. I hit the Rainier Trail with my trekking poles and assumed Paul would catch up to me but we were unable to connect. I ascended Section Line up to West Tiger III looking back and yelling for Paul periodically.

I reached West Tiger III summit in 3:16:12 (18.0 miles) and West Tiger I summit in 3:30:46 (19.0 miles), which was 30 minutes faster than 2020. From the summit of West Tiger I, I descended the Bootleg Trail to the junction with East Tiger Trail. This section was somewhat slow because I noticed that my GPS track was going off course. However I realized that this was an error with the GPS track and not my route so I began to pick up the pace again.

The connector Trail between the Bootleg and the Main Tiger Mountain Road was quite overgrown and narrow but I managed to pass through it in a decent pace. I reached the junction with Main Tiger Mountain Road in 3:47:45 (20.6 miles). Then as I was ascending the forest road to East Tiger summit I received a call from Troy stating he had made it to the top of East Tiger and was waiting for me. I was excited that Troy would be able to help push me down the hill. I reached the summit of East Tiger in 4:18:21 (23.6 miles), which was 40 minutes faster than in 2020.

Troy and I descended the forest road with reckless abandon. At some points I looked at my watch and we were pushing 6-minute miles. This was much faster than 2020 and I reached the Northwest Timber Trail in 4:53:46 (mile 28.8). The temperatures were still tolerable, reaching into the 70s under partly sunny skies. However, my pace suffered when I lost my gravity assistance and the trail leveled out. I gutted out the last 2.5 miles to the East Tiger parking area to finish out the race in 5:14:54, which was about 37 minutes faster than 2020.

I was very happy with the big personal best this year. It was an excellent run and my legs actually felt pretty good, which I will attribute to drinking another 1.5 liters with seven hundred calories of tailwind and taking in two more gels on the latter half of the course. Thank you very much to Apryle for crewing me at the midway point and shuttling me from the house to the start and the finish to our house. Thank you so much too Stephane for pacing me the first 2.5 miles along Coal Creek, it was a great way to start the run. Thank you so much to Troy for pacing me up Margaret’s Way and down East Tiger Mountain, these were two very crucial sections and you were invaluable to reaching my personal best time. Also thanks to Paul for trying to meet up, sorry we were unable to connect on the trail. Thank you to Scott Sowle with Run for Shoes for putting on this excellent event, which promotes equity and running. The conditions were nearly perfect to run a quick time and I felt as though my pacing strategy was effective. However, I would like to come back to try to break 5 hours and this 50k which I think is a possibility.