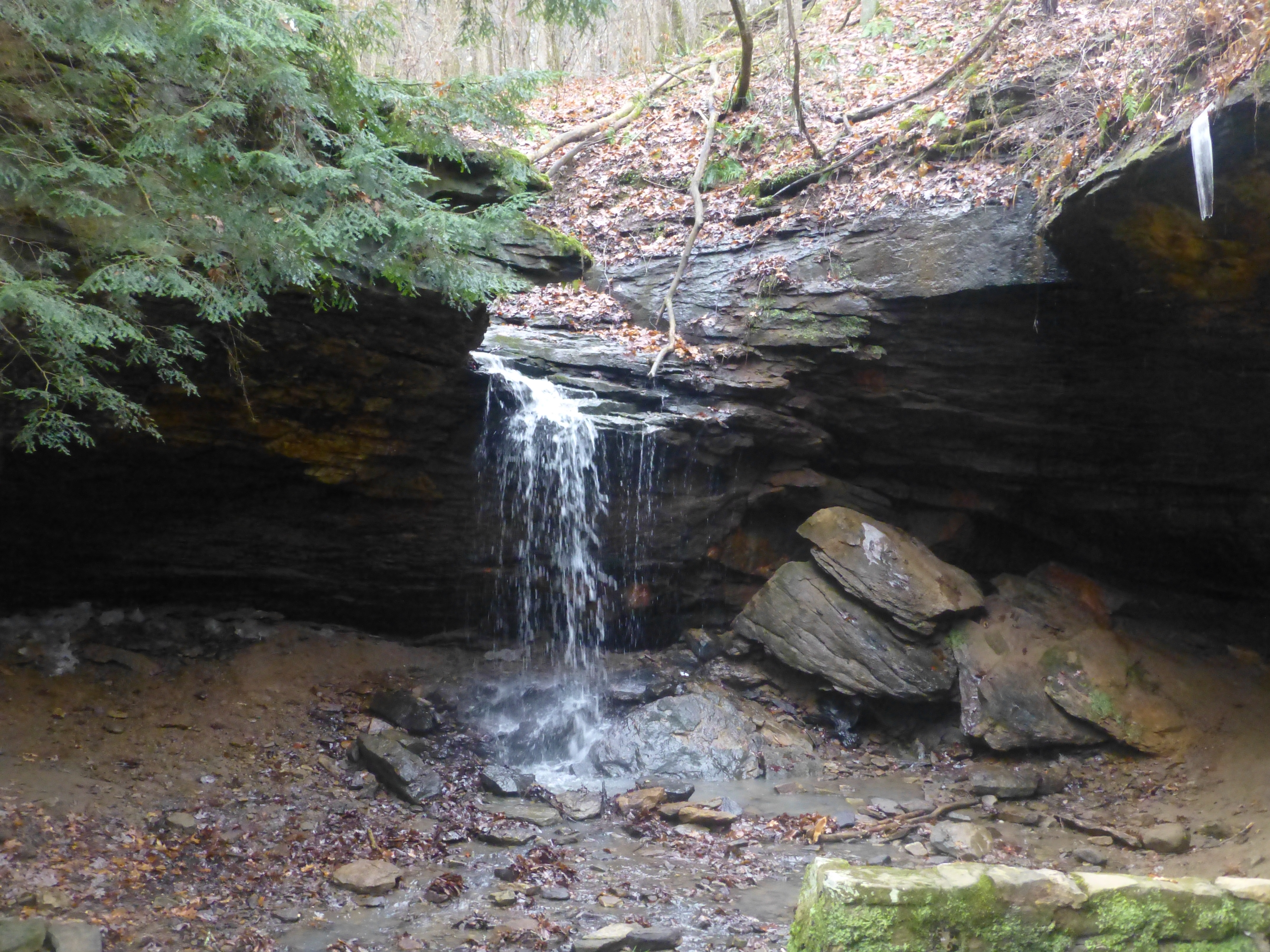 Pennsylvania is home to thousands of miles of trail and beautiful wilderness that could take several years, even decades to fully explore, but much like my Ohio series, I only want to highlight the few areas that I have had the opportunity to visit.

While visiting Apryle’s parents early this winter, I discovered a hidden gem in the form of Boyd’s Big Tree Nature Preserve. This is a 949 acre nature preserve north of Harrisburg and features some beautiful wooded trail as well as some challenging climbs. The park was donated by a real estate developer in 1999 and the park is situated on Blue Mountain. Blue Mountain is a 150 mile ridge that constitutes the southern and eastern portion of the Appalachian Mountains in Pennsylvania.

There are roughly 10.6 miles of trail and the arbitrary highpoint is about 1400ft with a grouping of radio towers. The area surrounding the preserve is aesthetic, with lightly trafficked roads and a mix of pasture and forested hillsides. The main water feature of the area is the Susquehanna River which is immediately southwest of the preserve. The forest type is mixed deciduous, which makes up about 90% of the park. There are a few open grassy areas along the power lines, which bisect the preserve.

I racked up about 97.6 miles in the park with 17,159 vertical feet, and on average one could accumulate about 1800 vertical feet covering the 10 miles of trail within the property. The conditions wavered between snow-covered, icy, and muddy in my short stint covering the parks trails. Although, there are plenty of other trails in the area, I was content to run my miles among the big trees of Boyds Preserve.

Raccoon Creek State Park is a 7572 acre park in Beaver County. It is an Appalachian mixed mesophytic forest which is an ecoregion of the temperate broadleaf and mixed forests biome. The main trees include Red Maple, Yellow Birch, American Beech, White Ash, White Pine, American Aspen, Cherry, and Hemlock.

There are several dozen miles of trail, which traverse the undulating landscape where short steep hills overlook narrow meandering streams. Although there are no sweeping views, the constant variation in terrain and morphing of forest type makes for a ideal trail running experience. One of the most notable features is the Frankfort Mineral Springs, which serves as an excellent photo opportunity. Here there is an overhanging rock slab with a steady pouring spout of water with a backdrop of sparse Hemlock.

In addition to being one of the most beautiful parks in the state, it also served as Apryle and I’s wedding location. In the planning stages of the wedding we singled the park out due to its proximity to family and friends in the area. It was part way between my family in Tiffin, Ohio and Apryle’s family in Harrisburg, Pennsylvania. However, we had only read about it and seen pictures online, but Apryle and I fell in love with the park after visiting it in November of 2015.

We were married on June 4th of 2016 at the main recreation hall and despite plans for a post wedding circumnavigation run, we did not have the opportunity to follow through on this. But in December of 2017, en route back to Tiffin, I decided to tackle the 19 mile loop. The weather was perfect, the trails were snow-free and route was well marked.

I started the run from the Heritage Trail in the southeast corner of the park and made my way southwestward. About four miles into the run, I crossed HW 18 and the trail trends northwestward. I kept on the Heritage Trail for 10 miles before hopping onto the Appaloosa Trail where my trajectory changed to a northeast path. After rounding the western fringe of the park, the Appaloosa trail turned due east and ended with a short stint on a dirt road before becoming the Forest Trail.

The Forest trail dives southeast and I crossed highway 18 again about 14.7 miles into the run. After crossing HW 18, the Forest trail weaves and switches back across the northern board of the park before skirting along Raccoon Lake. In terms of navigation, I struggled most in the last mile, while trying to cross Traverse Creek at the dam site. I made it back to the car 2 hours and 54 minutes of running and covering 19.24 miles and 3488 feet of vertical gain.