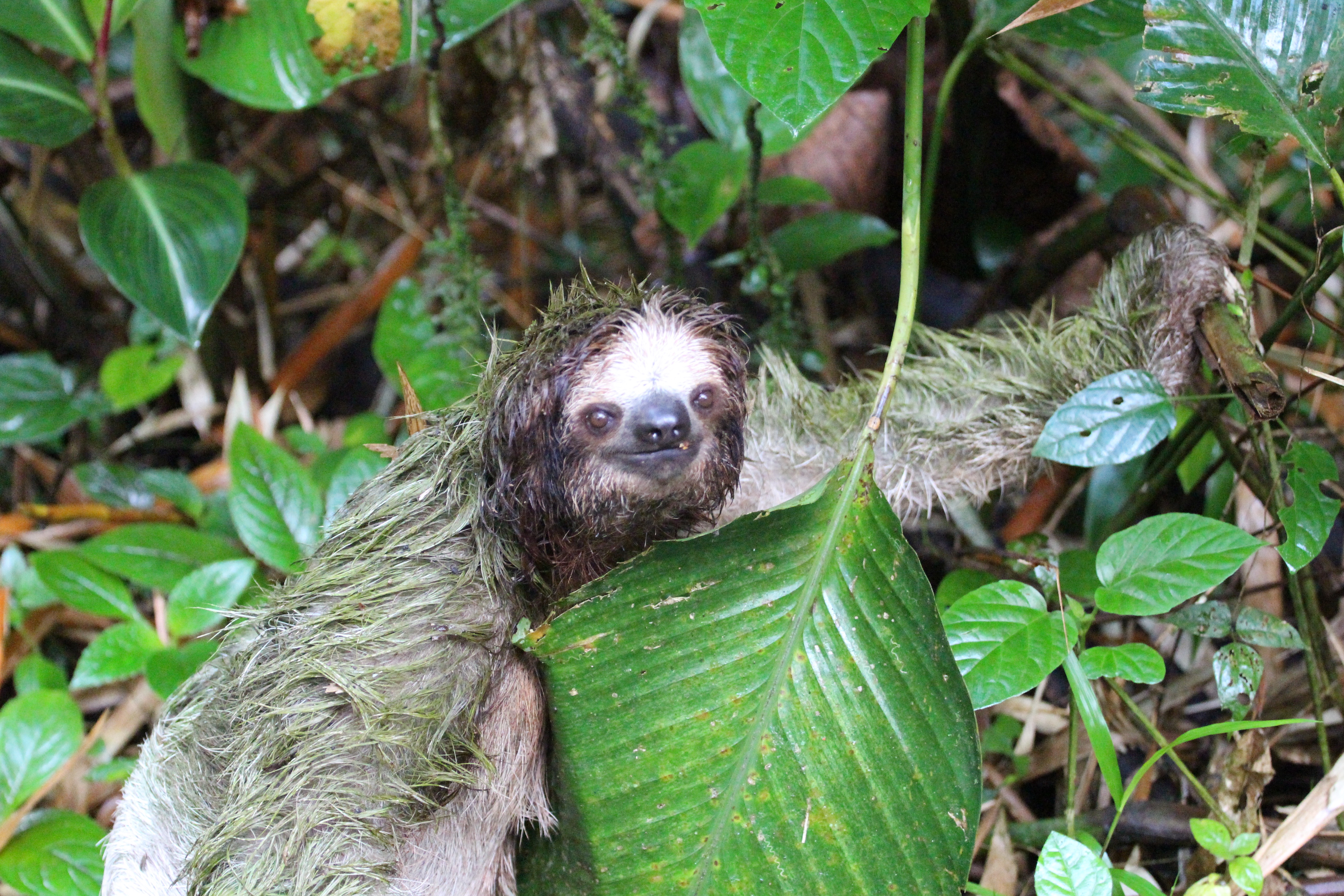 We continued east through La Fortuna. We drove under Cruces de Fauna, which looked like hanging net bridges for wildlife like monkeys, olingos, and sloths to use in order to cross roads. We drove past huge pineapple plantations. Costa Rica is the largest pineapple supplier to both the European Union and the United States. Unfortunately, pineapple is not always grown responsibly, leading to deforestation and pollution by way of pesticides which contaminate water supplies.

We had not eaten in awhile and were really hungry. We checked in at Gavilan and asked about the reported 5k of trails on the property. They said many of the trails were closed and if we were out on a trail during a rain storm when the wind kicked up, to head back immediately because trees fall over all the time. A bit disappointed by the trail news, we went to the nearest soda for casados vegetarianos. The next day, we planned to visit La Selva, a private reserve known for birding, that we passed on our drive in.

That night, I was really really sick. I seemed to have what Zach had, maybe  a little worse. I didn’t sleep at all. It was one of the sickest I can ever remember being. The next morning, I was still pretty sick. Every time I got out of bed, I got sick. Every time I drank anything, I got sick. I was so sick! Zach’s sickness only lasted one night, so I psyched myself up for a test-walk around the hotel trails. We slowly walked across the lawn and down the trail to the river. We had to pause with each step. Looking up made me nauseated. Looking down did, too. Zach helped me down the slippery wooden stairs that led to the water. We spotted a few birds then headed back up. On our way back across the lawn, we saw 2-3 toucans pecking at a tree. But I could only look up for a second or two at a time, let alone hold the camera or binoculars to my eyes. I staggered back across the lawn and into our room where I was sicker than sick. I decided to rest for bit while Zach went for a run. Maybe when he got back I would be better.

There were two reasons that my mileage plunged during the trip to Costa Rica, first, the focus was wildlife, and second, there were not many great route options in the country. Even if there was a good trail network, it was closed all but 12 hours of the day and the compulsion to scan every area for birds was too great. However, on this particular day we had some down time so I decided to run around the Puerto Viejo area. The weather was a balmy 84 degrees with humidity around 80% and a variable sky ranging from overcast to sunny with the occasional downpour.

I started the run from Hotel Gavilan then headed up the road to Barrio La Trinidad and up a dirt road past a Heart of Palm Plantation over to the entrance of La Selva. From there I ran southward along highway 4. After realizing that highway running was a bad idea, I returned to Gavilan and headed westward past Barrio Aranjal and then north over the Rio Sucio. As I passed through banana plantations I spotted many parrots flying from tree to tree, including the elusive Great Green Macaw. I darted home to get Apryle. I was surprisingly tired after only 11 miles on pancake flat terrain, but I must have sweated out a few pounds.

The second run was along a dirt road that passed right between Rio Sarapiqui and Rio Sucio in the heart of a banana plantation. During this short 4 miler I realized the area was classified as a rainforest. When I started it was sunny, but after only a few minutes I was caught in one the hardest rains I have ever felt. As quickly as the rain showers came, they were gone and the sun returned. Even if the routes were not the most aesthetic, I am always open to experience the nuances of a unique place at a ground level, and running is the best means to accomplish this task.

When Zach got back, I still felt awful but I needed to get out of the hotel. Maybe we could find the macaws. I put on my shoes and we walked down the Gavilan’s long rocky driveway. At the end of the drive, we made a left in hopes of following the road to where it might cross the river. We slowly walked down the lane, with houses on our right and farm on our left. When we got to the river, we paused briefly to look for birds before starting back. Zach spotted two sloths in a tree! A two-toed sloth, usually nocturnal, was moving around. We snapped photos and sat on the roadside watching the sloth move across the tree until he hid himself deep in the tangles of two big branches. The second, a three-toed sloth was dozing higher up. Another wave of sickness washed over me. We walked back to the Gavilan and I rested a bit more. We were hoping to visit Selva Verde today, a private reserve known for good birding. I was disappointed my sickness messed up our plans, but at least the day was salvaged when Zach found the sloths!

My sickness was becoming more intermittent and we optimistically asked the Gavilan receptionist to book us a guide for La Selva biological station for the following morning. We decided to cruise over to Selva Verde to see if we could make a dinner reservation and watch the birds from their deck. While we were there, we figured we might as well inquire about a day pass to walk the trails. We were thrilled to learn it was just $10 per person to walk the self-guided trails so we walked for about an hour and then sat on the deck and watched the bird feeders. I got sick while we were there and laid on their lawn chairs by the pool. We headed back to the Gavilan briefly before going back to La Selva for dinner.

We got there early and watched the birds have a final evening feast at the feeders as the sun went down. For about 30 minutes, the rain came down in sheets. We shared a pineapple smoothie and a wood-fired pizza. Before we left, one of the restaurant hosts took us over to one of the manicured man-made ponds and flipped the leaves over just as William had a few days prior at Bogarin. This time, in the cover of night, the red-eyed poison dart frogs were busy. There were quite a few of them! We even saw frogs mating!

We still managed to see a ton even though I was sick.

I slept well and felt better the following morning. We had breakfast at the Gavilan and packed up since we would be leaving to go to San Jose after the tour. We bumped down the rocky driveway until I saw a down branch or something in the road ahead. Probably carnage from last night’s storm. I drove up next to it so Zach could assess the situation. The situation turned out to be a sloth.

The brown-throated three-toed sloth (Bradypus variegatus) makes a weekly dangerous journey to the forest floor to defecate. It likely does this as part of a symbiotic relationship with pyralid moths (Cryptoses species). This moth’s entire life-cycle is dependent on the sloth. When a sloth descends to the forest floor to defecate, a pregnant female moth will leave the sloth’s fur and lay her eggs directly in the sloth’s feces. The larvae develop entirely within the feces, and when they emerge as adults they fly into the canopy to search for mating grounds in sloth fur, thus continuing the moth life-cycle. So, what does the sloth get out of it? The moths seem to farm algae in the sloth’s fur by adding nitrogen. This algae is part of the sloth’s diet.

We stopped and watched the sloth, who was in the latter stages of doing his business. We saw the moths fly down to the feces pile. The sloth turned his head like a robot and looked at us. He slowly started walking back toward the forest. We watched, photographed, and filmed this amazing wildlife encounter. We watched his three toes reach out trying to hook on to any stem. We watched and waited until he made it safely off the road and was concealed in the forest.

We continued on to La Selva. La Selva Biological station is a 1536 hectare (3795 acre) reserve in the heart of the Caribbean lowland rain forest. Braulio Carrillo National Park makes up the southern boarder of the park and further extends the wildlife corridor another 47,000 hectares. The property is owned and operated by the Organization for Tropical Studies. The purpose of the station is to protect old-growth rainforest and provide laboratories for tropical research and education. It was originally established by Leslie Holdridge, an American botanist and climatologist, in 1953 as a means to experiment with agriculture.

Primary forest makes up 55% of the property and the remainder is a patchwork of pastures, plantations, logged areas and secondary growth forests in various stages of succession. The reserve is home to over 500,000 unique species, 467 of which are birds, making it the most diverse location to bird in Central America.

Our group at the La Selva tour consisted of two men from France and an experienced birding couple from Minnesota. Our tour started with toucans, the rare agami heron, and red-lored parrots, and many more birds. We were lucky enough to stumble on a group of spider monkeys. On our way out, we asked our guide if he had any tips on viewing Great Green Macaws. He described the spot where Zach had seen them on his run the previous day. After our tour ended, Zach ran down the road and I followed him in the jeep. As we approached, we heard the loud ruckus of the magnificent birds – they were close! We saw another car parked ahead and scopes pointed at some trees in the field. Great Green Macaws rely on mountain almond trees both as a source of food and also as nesting sites. In Costa Rica, the range of the great green macaw is restricted to 1120 square kilometers of very wet forests along the border with Nicaragua where there are populations in the Bosawas and San Juan reserves, which represents only 10% of its historical range. In 1994, the population of Costa Rica was estimated at 210 individuals with only 35 to 40 breeding pairs. Following conservation efforts, the population of macaws in Costa Rica was estimated at 1530 individuals. We watched two macaws in a far tree, then moved up the road a bit and watched a few fly into a tree up there. Sloths and macaws – what a way to end our trip!!

We started south toward San Jose. We tried to stop at another national park along the way but forgot that they close around 4 p.m. so we didn’t have time. We drove the most scenic stretch of road so far, with sweeping views of the cloud forest. When we got to San Jose, we had some time to kill so Zach ran laps around a city park that overlooked the airport while I read. When we took the rental car back, there were hundreds of crimson-fronted parrots in the trees outside the rental car office. We watched the parrots for awhile and got dinner at the only restaurant nearby, Denny’s. We took the shuttle to the airport and concluded our Costa Rica wildlife adventure.