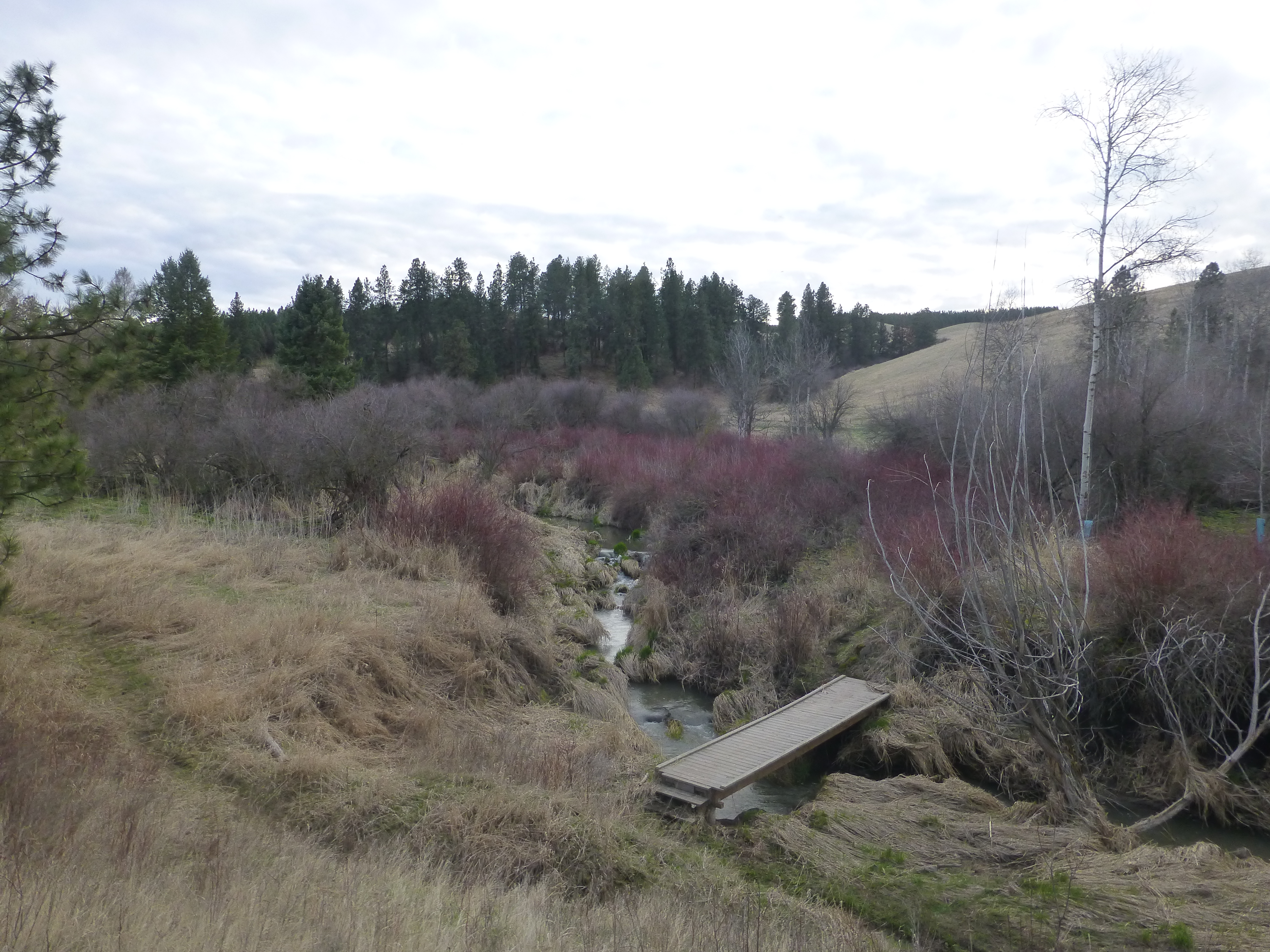 From my observation during my short stint in the region, the Palouse is almost exclusively private land. There are very few pockets of prairie remaining, it appears the general consensus is, that if an area does not have trees, it is not worth saving and therefore serves as a blank slate to farm or develop. Not to state that worldwide forested landscapes are not equally exploited, but in an area where the steppe prevails, the most logical patch to preserve is the patch containing the rare tree.

Since February, my base of operations has been Military Hill in the northwest quadrant of Pullman. In my forays into the city and into the countryside, I have located seven locations or trails worth noting with some detail. These include: Kamiak Butte County Park, Magpie Forest, WSU Arboretum, Rose Creek Preserve, Steptoe Butte State Park, Palouse Trail and Pullman Loop, and the enigmatic Conservation Area. Since I have already described Kamiack Butte in the first edition of this two part series, I will focus part II on the subordinate locations.

Magpie Forest is a 14-acre gem on the northern fringe of Pullman which Washington State University purchased from private landowners in 2005. From what I have gleaned from various articles, the spot was purchased due to the encroaching housing developments that might have threatened one of the last remnants of the endangered Palouse Prairie. The land serves as an outdoor environmental science laboratory for native prairie habitat protection. This small swath of forest, shrubs and grassland contain 160 unique species of plants and animals.

The forest consist mainly of Hawthorn thickets surrounded by fields of wheat, but there are also Quaking Aspen and Mountain Ash, along with shrubs, grasses and forbs. It appears that the location has always been an important place for local conservation groups and continues to provide research opportunities as well as a site to cultivate native plants for re-introduction elsewhere.

I first discovered Magpie Forest on an exploratory trip to the large water tower on the north side of town. I followed Merman Road to its terminus and then found myself weaving my way through a dense, compact, low growing Hawthorn forest. This gave way to an open grassland, that eventually lead to a wide ridge line that connected back up with the forest. The crude trail is only a mile, but it is worth looping a few times to absorb this unique ecosystem.

Much like with Magpie Forest, as an outsider, it is difficult to see the big picture and impact that various places truly have on the region, WSU Arboretum is not an exception. The Arboretum is the best place in the town of Pullman to run, there are rolling hills, sweeping views, and groomed gravel trails. I can typically run a three mile loop before I must backtrack, and for Pullman, trail running does not get much better than that.

The arboretum consist of mostly grass covered hills, but there is also a densely forested pond in the middle of the 170 acre plot. Additionally, there are several fields on the east side where various agricultural experiments take place. However, it is my understanding based on a 2009 development plan, that this arboretum will eventually be transformed into an impressive labyrinth of attractions. These are to include new Grizzly Bear and wild herbivore facilities, demonstration gardens, and a Raptor amphitheater.

Reading the plans, I found myself at first thinking, this will be quite impressive when it is completed. Then I thought, I enjoy its simplicity in its current state, why is there a need for additional construction. Finally, I read the remainder of the article written in 2009, seeing that the estimated date of completion was 2011 and realized that perhaps I will get to enjoy the simplicity for now and perhaps get to see the impressive finished product several years from now.

Rose Creek Preserve is a 101 acre riparian corridor that has managed to survive the onslaught of habitat destruction. The preserve is home to 250 species of plants including: Quaking Aspen, Black Hawthorn, Cow Parsnip, as well as healthy remnant of Idaho Fescue. The preserve is located in an unexpected location in the middle of wheat and lentil fields gridded out by bisecting dirt roads. There is a narrow dirt path that leads through Hawthorn thicket, into an Aspen Grove. From there, there is a wooden bridge creek crossing that leads to a grassy knoll dotted with Ponderosa Pines. From this vantage point a cascading Rose Creek is visible weaving through the landscape along with a myriad of plant life blanketing the ground. The trail is a lollipop and just under a mile in length.

Steptoe Butte State Park is a 150 acre park that features a 3,612 foot prominence with a paved road circling its way to the top. The land for the park was donated by Virgil McCroskey; who appears to have owned a substantial amount of land in the area.  The bare cone is quite obvious as it juts 1000 feet above the surrounding hills. However, I do not find the park all that interesting considering that one can drive all the way to the top without much physical effort. It is still a descent run; about 7 miles round trip with a very gradual grade to the summit.

The Pullman Loop is a paved pathway that circles the city of Pullman in about 7.5 miles. From my residence on Military Hill I first jump on the Grand Avenue Greenway, which follows Little Missouri Creek. This stretch of trail is surrounded by grasses and remnants of an abandoned railway. From Grand Avenue Greenway, I continue clockwise to the Terre View Trail which passes by the Port of Whitman County Industrial Park, WSU housing neighborhoods, and the Palouse Golf Course before becoming the Arboretum Link Trail. The Arboretum Link section parallels a Willow shaded roadway passing by animal research facilities before passing by the WSU arboretum. Often times the Grizzly Bear will be out playing in their enclosure next to this trail as well. This trail becomes the Palouse Trail after crossing HW 270.

The Palouse Trail is a lengthy section of trail that connects Pullman and Moscow but also continues as far east as Troy Idaho. In order to finish the loop, I head west following Paradise Creek, to Koppel Farm. At this point the trail changes names once again and becomes Koppel Farm Trail until reaching the City Park, when it switches to City Park Trail. After crossing under 270, and arriving downtown, the trail becomes The Riverwalk Trail which eventually connects back to the Grand Avenue Greenway. Even the downtown section is quite scenic skirting along the creek with newly installed wooden bridges and visible restoration efforts. Although, paved city paths are not typically my first choice, the Pullman Loop is a viable alternative to a longer drive elsewhere.

The Conservation area is last and probably least on this list, it is a simple parcel of land that was once a tree nursery (I think). There is a short kilometer loop that is mostly bare grassland, with a few rows of evergreen and deciduous trees clearly planted in meticulous fashion. However, I am able to easily link up this run with the gravel path that passes over Military Hill from my current place of residence, therefore this park is perfect for a short morning run.

Along with the Palouse Hills, I have also explored the Snake River region, in which I have located three running destinations, with Hells Gate being the best of the group. In part one I reviewed Hells Gate State Park, so in part two I will briefly describe the two subordinate locations including: Wawawai County Park and Boyer State Park.

Wawawai County Park is a 49 acre park located about three miles upstream from the Lower Granite Dam on the Snake River. Wawawai is a Native American word that is said to mean Council Ground. The park has a mile loop that is mostly gravel, but also passes through the paved camping area. Though the loop is quite short, it offers some vertical gain, and scenic views of the Snake River Canyon.

Native Americans of the Palouse and Nez Perce tribes sporadically inhabited the region until the arrival of European settlers in the 1870s. However, Wawawai is best known for its many orchards that occupied the land at the junction of Wawawai Creek and the Snake River between the late 1800s to mid 1900s. The town of Wawawai was established in 1878 but was vacated in 1884, because it took up valuable orchard land, but it remained an informal community until construction of the Lower Granite Dam began in the late 1960s. By 1975, the dam was completed and the former orchard land was under 80 feet of water.

Boyer State Park consists of a small picnic area, marina and a short three mile paved trail along the Snake River between Almota and the Lower Granite Dam. This trail offers scenic views of the pronounced canyon walls and advancing river below.

Living in Pullman, amidst the vast Palouse and the winding Snake River has been an interesting experience, I have thoroughly enjoyed exploring a new region. The ecosystem has a lot to offer in terms of biodiversity but it must be sought out, living in Pullman is by no means a nature lovers paradise and it is by no stretch a trail runners dream. However, I am happy to say that I have made the best out of my time and learned to appreciate the little things in the last three months.