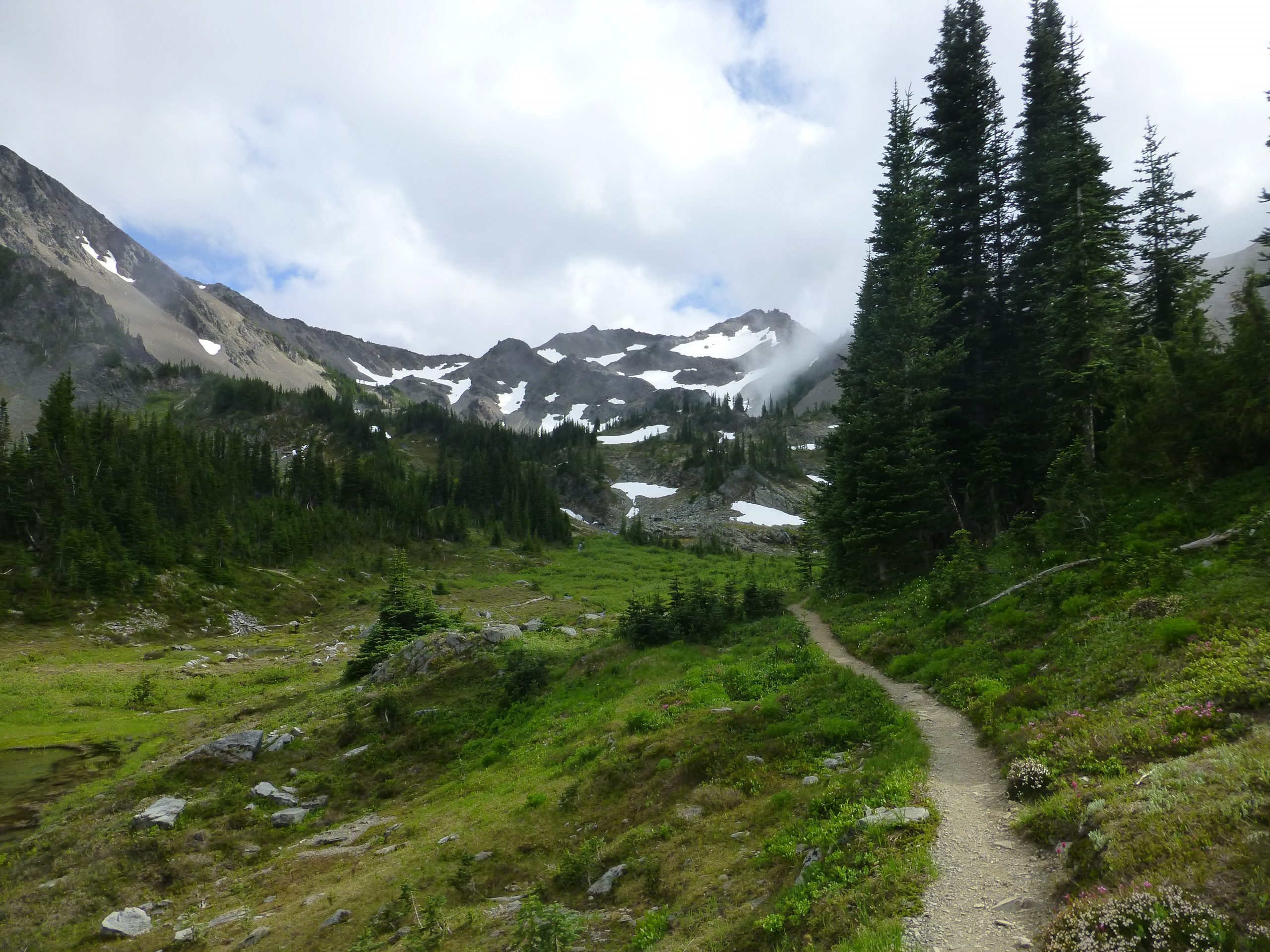 While the eastern part of Washington state was in a sweltering heat wave and even being shut down due to fire risk on Jul 21st, Apryle and I drove as far west as possible to the Olympic Peninsula. On the peninsula it was cool and misty with rain clouds overhead the entire trip to Deer Park. In fact we were concerned we did not bring warm enough gear to successfully complete our camping trip.

We started our multi day loop from Deer Park (5200 feet) at 12:13PM and it was a cool 47 degrees with a slight breeze and mist in the air. It was my second time on the Obstruction Point – Deer Park Trail and the first time was very similar despite being in the middle of summer. I assured Apryle that by the time we neared Obstruction Point, the sky would open up, temperatures would warm, and we would get some views. However, as we pressed on, temperatures cooled and the mist thickened, I was less confident.

The moisture in the air created an eerie surrounding, like we were hiking into an abyss. The dew clinging to the wildflowers, moss, lichen, and spider webs brought the still objects to life as they glistened in the dim light. This was not enough to brighten our morale, and Apryle and I decided that upon reaching Obstruction Point, we would simply turn around and end our trip early.

However, shortly after passing Roaring Winds and Elk Mountain (6600 feet), the clouds began to lift and the Olympic Mountains to the south and west came into full brilliance. The sun began to emerge and temperatures increased, and our morale proportionately increased. We decided to go a little further before turning around. By the time we reached the Lillian Ridge junction, we decided to try our best to complete the loop in one day or camp at Lower Cameron Creek.

The views along the ridge were stunning and the weather continued to improve. Apryle and I were both so pleased that we decided to continue. At mile 9.3 (6400 feet) we began a sharp descent down a wooded slope into an open valley. Because of our angle and the way the mountains rose around all sides of the ravine it resembled a bowl. In just 1.4 miles we lost 1400 feet, and we began our traverse of Grand Valley. The valley was covered in a dense fog and there were dozens of Black Tailed Deer grazing on the lush vegetation.

We passed by Grand Lake, then skirted along the deceptive Moose Lake (despite resembling Moose habitat, there are no Moose west of the Cascades), and then finally Gladys Lake. Shortly after Gladys Lake at mile 12.6, we stopped for a picnic in one of the most beautiful spots we had ever seen. This tiered ravine offered sublime views of the southern portion of Grand Valley and the headwaters of Grand Creek. The upper level consisted of gray rocky slopes, which clashed with the lower level of bright green grasses that were punctuated by vibrant wildflowers. All the while the clear blue waters of Grand Creek rumbled and rolled over the perfectly uneven landscape.

We sat on a naturally carved piece of granite and enjoyed dinner as we watched Olympic Marmots forage, dig burrows, and play fight in the meadow. With much reluctance we left our perfect meadow behind and started the ascent to Grand Pass. We picked our way up through the shute which passed over several snow fields and weaved through large boulders. Then we found ourselves at eye level with a pristine alpine lake, a surreal position, which created a stunning optical illusion. At mile 13.9 we reached the 6400-foot Grand Pass and we absorbed the views before they all passed behind the wall of clouds engulfing the Olympics.

The descent from Grand Pass to Cameron Creek was one of the most arduous that I can remember. It started with long scree slope switchbacks and then gave way to tight zigzags through a riparian habitat. We passed through the largest fields of wildflowers I had ever seen. Then we passed along a steep hillside with a bubbling stream tumbling over the rocks and cliffs. We then entered a dense cedar forest where we saw the illusive Red Crossbills eating cedar cones and chatting loudly amongst one another.

We reached the Cameron Creek junction at mile 16 (4146 feet) after losing almost 2300 feet in just 2 miles. We saw a Snowshoe Hare in their summer coat that was kind enough to point us in the direction of the Lower Cameron Creek campsite. It was slow moving along the Cameron Creek trail because it was fairly overgrown. Fortunately it was overgrown with Salmonberries and I ate more than my fair share en route to camp. We passed one other group and we debated where Lower Cameron campsite might be located, and decided that there must no longer be a sign. Apryle and I found a flat spot to set up the tent and decided it was either the correct spot, or close enough to the correct spot and called it a night. We set up the small one-person tent between the largest Douglas Fir trees I had ever seen and while Apryle unrolled the sleeping pads, I refilled our water.

We fell asleep with the setting sun, ending our day around 7:20PM (17.32 miles). Because I was carrying a relatively small pack, we were only able to fit one down sleeping bag; so I slept with a small down jacket. Therefore, when temperatures dropped into the low 30s, I could only keep one half of my body warm at a time. I managed to get a few hours rest and we rose with the sun to hike back out to Deer Park.

On day two (July 22nd) of our two day Olympic excursion, Apryle and I broke camp and hit the trail at 6:19AM. The first 6.1 miles along Cameron Creek were fairly uneventful with a net loss of 1557 feet (3669 feet at Cameron Campsite to 2112 at Three Forks Junction). However, just because it was uneventful does not mean that it was not a beautiful dense forest. We passed under thousands of the largest Douglas Firs I had ever seen, brushed past broad-leafed Devil’s Club, bountiful salmonberry, and ever-present Sword Fern. Some of the areas were so densely shaded that it looked like dusk and glacial erratics were strewn all over the ravine. We also had the opportunity to cross the creek several times over natural fallen logs to test our tightrope balance.

By the time we reached Three Forks Junction the temperature had risen from low 40s to low 60s and the sun was poking through the towering firs. The final 5.1 miles of our two-day loop was the most difficult. It was a 5.1-mile 3250-foot climb back up to Deer Park. We were treated to the views we missed because of the clouds yesterday and enjoyed an overwhelming feeling of accomplishment to complete our trip that was almost cut short. We passed by the Mountain Goat relocation staging point and read up on the progress the National Park Service was making. Then we returned to our car and reflected on a mission accomplished.