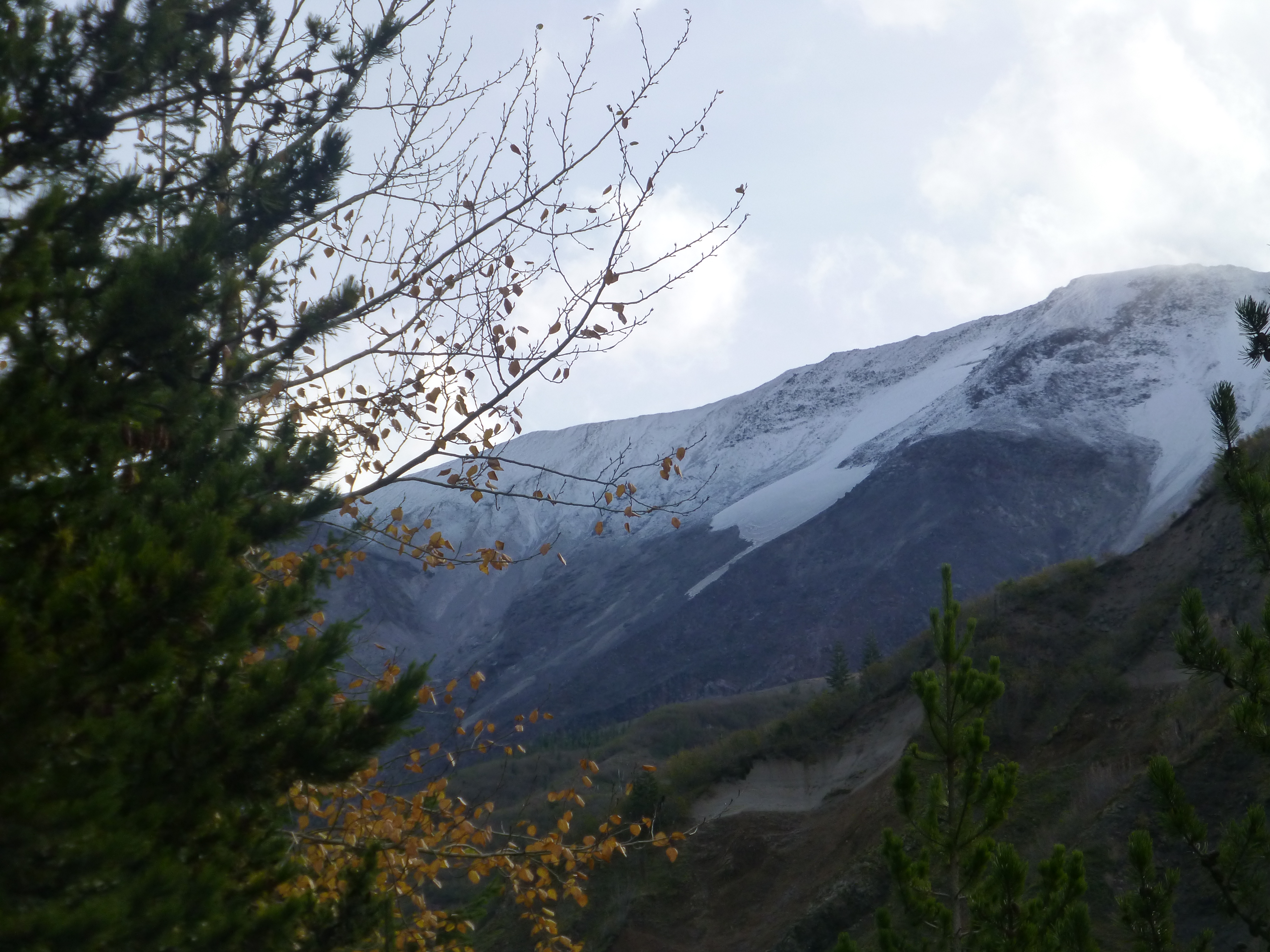 Mt St Helens erupted on May 18th 1980 forever altering the landscape. Now 38 years later Apryle Craig and Zach Szablewski set out on a quest to circumnavigate the volcano. The best way to accomplish this feat is via the Loowit Loop which is a 28 mile trail around the base of the mountain. Many complete the Loowit Loop each year and the Volcanic 50 allows many trail runners the opportunity to complete the circuit in a matter of hours. However, nobody to date has completed the loop with a five year old Green Cheek Conure and unfortunately due to the unfavorable forecast, neither has Apryle and Zach, here is their account none the less…

Apryle awoke at 2:18AM on Saturday October 27th 2018, followed by Zach at 2:30AM, their gear was already packed in the car and after preparing some coffee and toast they were off on their journey south bound. The 2012 Nissan Versa handled well on I-5 as well as the winding roads of WA-503 and the couple arrived at the Climbers Bivouac on the south side of the mountain at 6:45AM. After donning the hydration packs and stuffing away other essentials, they started on the Ptarmigan Trail at 7:06AM.

Approach: The day starts with a gradual 1.8 mile climb up the forested Ptarmigan Trail before reaching the Loowit Loop.

The Ptarmigan trail was uneventful and occurred almost exclusively under my dimly lit headlamp. The temperature must have been in the low 40s, perfect for running. I recall there being fairly thick tree cover until we reached the Loowit loop about 1.8 miles into the run. Apryle made the executive decision to take the clockwise direction, a decision that we grew to regret in the latter stages of the journey.

Mudflow I: The first stage of the loop is considered a mudflow and is a lightly undulating 8 miles below the southwest face of the mountain.

The first mile or two traverses a technical boulder field that is marked with a large wood post every 50 meters. This section was quite interesting to scramble across, but also impossible to maintain a jog. The rocks eventually gave way to a smooth crushed gravel trail that cut in and out of small ravines. Clusters of Ponderosa stands pepper the barren landscape adding a welcome contrast to the rocky moonscape. We spotted our first Mountain Goats along this section and also caught glimpses of the snow dusted west face of St Helens.

Blown Down Forest I: The second stage of the loop is considered the Blown Down Forest and features steep canyons with rapidly running streams, as well as some thickly forested hillsides, and scree strewn slopes and occupies about six miles of the loop.

We started the Blown Down Forest section with a switch-backing descent through a thick damp forest. After a 1500 foot descent down to the Toutle River we wasted about 15 minutes debating the best way to cross without wetting our feet. Eventually we gave in and we just walked through the frigid waters. The ascent up out of the ravine had a fixed rope due to the crumbling slope. Once on the ridge we passed through a dense forest with lime green moss carpet dotted with orange mushrooms (an unexpected sight). This gave way to a scree slope with sweeping views of the Toutle River carving its way westward and the mountain standing watch to the southeast. Here we spotted a Coyote scanning its domain and upon reaching the pumice plains we passed a small Elk heard that nervously watched our trajectory. The miles along the plains were quick and pleasant, we observed many more Elk herds and views of the breach.

Pyroclastic Flow: The third stage of the loop is the Pyroclastic Flow and this section experienced the brunt of the force of the Mt St Helens eruption. This two mile stretch is quite flat and scattered with rocky debris.

Wind was the hallmark of the short two mile stretch across the Pyroclastic Flow. We enjoyed views of Loowit Falls to the south and Spirit Lake to the northeast. The trail surface was crushed stone with scattered rock. The only vegetation was short grasses, antennaria, and the occasional out of place Salix springing from the rock.

Apryle and I ran into a group in this section that were covering up the sign for the Loowit Loop and we accidentally began running the Windy Ridge Trail and had to back track three quarters of a mile losing about twenty minutes with this misstep. We were quite discouraged and the wind really began whipping from the south and bringing with it a massive white cloud that obscured the entire southeast side of the mountain. After getting back on track we ascended to Windy Pass and as advertised it was excessively windy, so much so that we feared that Apryle would be tossed from the ridge. We consulted the map briefly at the col and then descended into calm windless Plains of Abraham. Here we began to celebrate a little early in anticipation of the completion of the loop.

Mudflow II: The Mudflow II is the fifth and final stage of the loop and possibly one of the most diverse sections of the trail. This 9 mile stretch passes through the south portion of the Plains of Abraham and then into and out of several ravines before passing through more forest and boulder fields.

We moved quickly across the plains but slowed with the undulations into and out of rocky ravines. When we reached the junction with Ape Caves we realized we still had 8 miles until we reached the Ptarmigan Trail which meant that our mistakes had added up to 2.5 miles. Although 2.5 miles is not much, after running for 24.5 miles and knowing that rain showers could hit at any moment, we were discouraged. As predicted the rain began to sputter from the sky around 3:10PM or about 25 miles into the run. We finally took out the rain coats at mile 27 when the sky really opened up. Fortunately we entered a thick forest that shielded us from the rain, but after only a mile or two we ascended back up to a rock field that became difficult to cross in the pouring rain.

We really entered the pain cave around mile 30 when we descended back into a forest only two miles from the car as the crow flies, but 4.3 miles on trail. The rain was coming down in buckets, our shoes, pants, and gloves were soaked and my raincoat was breeched. The full effects of fatigue and cold were taking control and we were nearing the end of our resolve. We ascended another 1100 feet over two miles before finally reaching the Ptarmigan Trail.

Descent: The day ends with a gradual, bone chilling demoralizingly painful 1.8 descent of forested Ptarmigan Trail that harbored so much optimism and hope ten hours earlier.

Apryle and I were elated to reach the Ptarmigan Trail, a trail that marked the conclusion of our loop, our summer running season, and every last ounce of energy. We greatly enjoyed the loop but the final three hours of rain made for a miserable last leg of the journey. Overall we finished the loop in about 10:40:22 with 34.32 miles and 9757 vertical feet. We quickly cranked the heat in car and changed out of our wet clothes and headed back north to Issaquah, leaving behind the mountain that has now created a lasting impression in mind as a place of remarkable beauty and rigorous challenges.