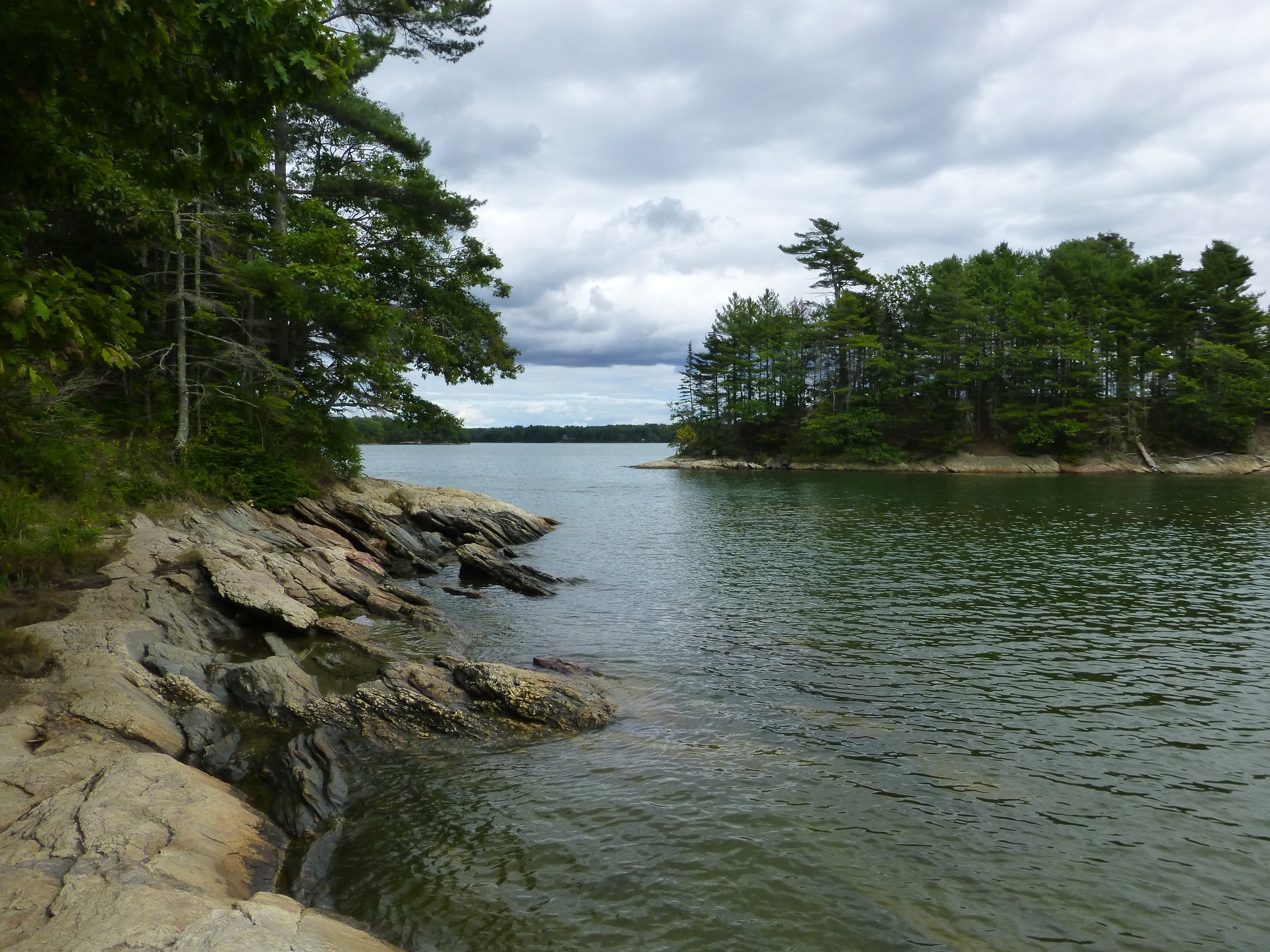 My parents and I landed in Boston on September 17th and then made our way northward through Massachusetts, New Hampshire and then into Maine. For the first night we decided to stay in Freeport, and since it was a spur of the moment decision I had to do some quick research on the area. I found three places of interest.

En route to our cabin rental in Trenton on September 18th, we stopped in a small coastal town called Camden. While mom and dad explored the shops, I explored the trails of Camden Hills State Park. Fortunately I was able to find a small hidden trail into the park at the end of Megunticook Street and avoid the crowds at the main entrance. From here I made the steep short ascent to Mount Battie (842 ft). From this vantage point I had excellent views of Penobscot Bay as well as the town of Camden below.

I continued on from Mount Battie, trying my best to explore as much of the 5710-acre park as possible. I followed a series of trails that switch-backed up steep hillsides littered with jagged talus and twisting roots. The forest floor was alive with marginal wood-fern, cinnamon fern, bunchberries, gooseberries, and more. While the canopy was formed by Eastern White Pine, Red Oak, Mountain Maple, Spruce, and American Beech. The trail shifted in and out of the forest, breaking free of cover and onto large rock slabs overlooking the miles of forest in the distance. I reached the largest mountain in the park: Mount Megunticook (1385 ft) and then continued back down to Camden to meet up with my parents.

It worked out quite well; I completed a small loop and returned back to downtown Camden via the Battie trail. One minute I was in the middle of a dense forest on a mountaintop, and the next I was walking around a charming downtown street with a bay front view.

On September 20th, our second day in Acadia, we decided to check out a few unique destinations on the Quiet Side of the national park.

On September 21st we took a long drive northward along the coast of Maine, stopping at a few points of interest.

In the early morning of September 22nd we boarded a large vessel, which took us out through Frenchman Bay and into the Atlantic Ocean. Before even leaving Frenchman Bay we were fortunate enough to spot two or three Minke Whales with flocks of Northern Gannets and Great Black-backed Gulls dive-bombing the water overhead. As we made our way further out to sea we spotted several groups of Atlantic White-sided Dolphin. When we reached our terminal destination of Mount Desert Lighthouse on Mount Desert Rock we saw large groups of Grey Seals and Harbor Seals both swimming and sunning on the rocks. Additionally, there were large flocks of Red-necked Phalarope wading in the waters around the island. Mount Desert Lighthouse is unique in that it is farther offshore and more exposed than any other lighthouse on the east coast (18 nautical miles south of Mount Desert Island).

The tour guide, who studied at College of the Atlantic, was quite knowledgeable and provided insights as to the behavior and typical feeding areas of the various marine mammals. Additionally he alluded to the fact that the mountains of Mount Desert Island are the highest mountains along the Atlantic coast in North America. Looking at the island from the sea it was evident how similar each of the peaks were in relation to one another, even the smaller Cranberry Isles resembled the same shape as the mountains on Mount Desert. This is due to the glacial activity of 18000 years prior, which compressed the jagged granite to the current shape.

Though the glacier had the final say in the current look of Mount Desert Island, there are four layers of rock that make up the unique geology of the island. The first layer is Ellsworth schist, which is a metamorphic rock similar to slate and was formed by pressure and heat. The second layer is sedimentary rock called Bar Harbor Formation, which was formed due to deposits from ancient rivers that settled on top of the Iapetus Ocean. The third layer (Cranberry Island Series) was formed by a chain of volcanoes, which deposited ash on the floor of the ocean. The combination of these three layers formed an ancient continent called Avalonia (located between present day North America and Europe).

Plate tectonics caused Avalonia to collide with present day North America and Europe. The collision of landmasses led to the formation of a massive mountain chain with pools of magma, which created the fourth granite layer. Once this landmass (Pangea) broke apart, some of Avalonia stayed plastered to North America while some remained attached to Western Europe. Time, erosion, and glacial activity finished the creation of Mount Desert Island. On our way back to the shore, I tried to envision the geologic timeline of Acadia National Park.

Overall, I was overwhelmed with the beauty of Maine and was so happy that I was able to enjoy the trip in the company of my parents.