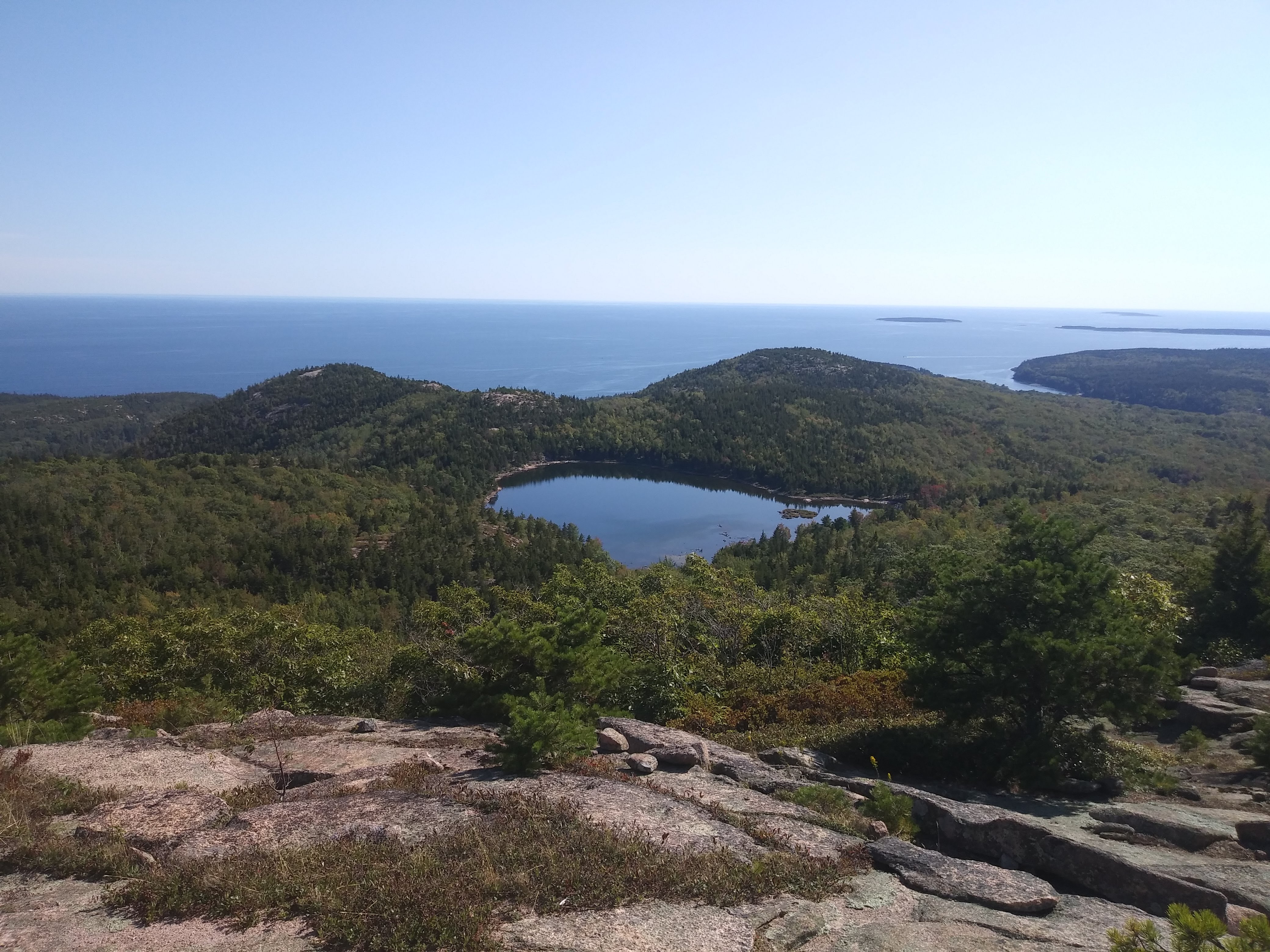 In late late September I took a cross-country flight from the Pacific coast of Washington to the Atlantic coast of Maine. I met my parents in Boston and then we traveled up the east seaboard to Mount Desert Island. My mother had wanted to visit Maine for many years and this year we finally made it happen. In this three part series, I will highlight my Acadia National Park runs first in part one and two and then describe the other adventures in part three.

My Acadia adventure began with a traverse of the northeast arm on the island from Somes Sound to the Atlantic Coast. Mom and dad dropped me off at the Sargent Mountain Trailhead and I told them that I would see them in about 3.5 hours. Little did I know that the technicality and steepness of the trail would render running much of the route at an adequate pace impossible. My underestimation of trail difficulty added about 2 hours to my time prediction.

From the Sargent Peak trailhead I started up the Hadlock Brook trail traveling through thick conifer forest following the dry brook before crossing under an extravagant stone carriage road bridge. I then ascended the Bald Peak trail up to my first peak of the day. This trail gave me my first taste of the difficulty of Acadia, with rooty, rocky, steep trail.

Once I reached the top of Bald Peak I understood why the Frenchman Samuel Champlain called the island: Isles des Monts Deserts on his expedition that took place 415 years and 15 days earlier. The large stretches of granite slaps near the summits looked quite desert-like and were actually the easiest running of the day. The blue trail blazes painted on the rock accompanied by cairns made for unique routes through the mountain tops.

From Bald Peak I continued on to Parkman Mountain, and Gilmore Peak which were both less than one kilometer from Bald Peak. All three summits offered beautiful views of the island, sounds, and ocean in the distance. Despite rising less than 1000 feet from the sea below, the mountains had an alpine feel. I continued on the Grandgent Trail from Gilmore Peak en route to Sargent Mountain, which was the steepest trail of the day and made for a slow trudge to the summit.

Sargent Mountain provided stunning panoramic views and was the starkest of the summit tops yet. After reaching four peaks in less than 2.5 miles, I thought my traverse might actually go quicker than I expected. I bounded down the Sargent South Ridge trail to Sargent Mountain Pond. This pond seemed to be the perfect place to spot a moose wadding in the shallow waters surrounded with a backdrop of deciduous trees, but the large ungulate is very rare in the park.

After soaking in the views of the pond, I made the quick out and back to Penobscot Mountain, my fifth summit of the day. Then I began the long descent of the Deer Brook trail, which was even equipped with a wooden staircase. The vegetation seemed to switch from coniferous upland forest to lowland deciduous forest as I reached Jordan Pond. I paused briefly at the oblong pond to watch a couple of common loons floating on the peaceful surface.

I took the Jordan Pond Path to the Bubbles Trail which made a rocky steep ascent to South Bubble. The sun was bathing the landscape and the temperatures were quickly rising into the low to mid 80s. I took the side trip to see the impressive Bubble glacial erratic balancing precariously on the cliff edge. Following the Bubbles trail onward, I tagged North Bubble and then descended to the carriage road on the banks of Eagle Lake.

After a few rare runnable miles I crossed Jordan Pond Road to begin the 800 foot climb to the top of Pemetic Mountain. This was perhaps my favorite summit of the trip, the trail was quite challenging and the views were worth the effort. The Wabanaki people once referred to the island as Pemetic or the sloping land and my eighth summit of the day epitomized that name. From the summit of Pemetic I continued along my course, losing all 800 feet that I had gained.

Following the Canon Brook trail I began the climb to Mount Desert’s highest peak, Cadillac Mountain (1530 feet). The South Ridge trail was the most crowded of the day and after getting disoriented by all the people I accidentally began following the North Ridge trail downward. I realized my error after about .5 miles and then climbed back to the summit of my ninth peak. From there I corrected and jumped onto the Cadillac-Dorr Connector trail. This trail offered interesting views of the layered cliffside of the gorge between Cadillac and Dorr Mountains.

I made the quick out and back to the summit of Dorr Mountain, named for perhaps the most influential person in the establishment of Acadia National Park, George B. Dorr. Dorr was a wealthy proponent of conservation that dedicated 43 years of his life, energy, and fortune establishing the park. After reaching the summit I stumbled my way down to trail to The Tarn. The vegetation around the Tarn was a woodland mix forest of Beech, Birch and Maple. After crossing highway 3 which parallels The Tarn, I began my last major set of climbs towards Huguenot Head. Unfortunately at this point I had surpassed the time that I had hoped meet my parents at Sand Beach, but I was able to get a call through to let them know that I would be late.

My energy was waning and I was out of calories and nearly out of water. The sun was baking and I was sweating profusely en route to summits number eleven and twelve (Huguenot Head and Champlain Mountain). I really enjoyed the different vegetation makeup of this ridge line and from Champlain Mountain there was a unique landscape view. A deep blue lake referred to as The Bowl was nestled in green mountains bordered by the Atlantic Ocean which created an atoll-esque scene.

The Champlain South Ridge trail gradually descended to The Bowl and it was quite satisfying to see the unique lake at eye level. From the lake I ascended to my thirteenth and final summit of the day, The Beehive. I descended the very rocky Bowl Trail which was tough on my ankles at this stage in the traverse. I reached Ocean Drive and then ran straight to Sand Beach and jumped in the Atlantic Ocean to finish out the traverse in style.

The Atlantic was refreshing and after refilling some water, mom, dad, and I walked to back to the car on Schooner Head Road ending my Northeast Arm Acadia adventure. The total traverse ended up being 19.6 miles with 6250 vertical feet taking me 5 hours and 24 minutes.