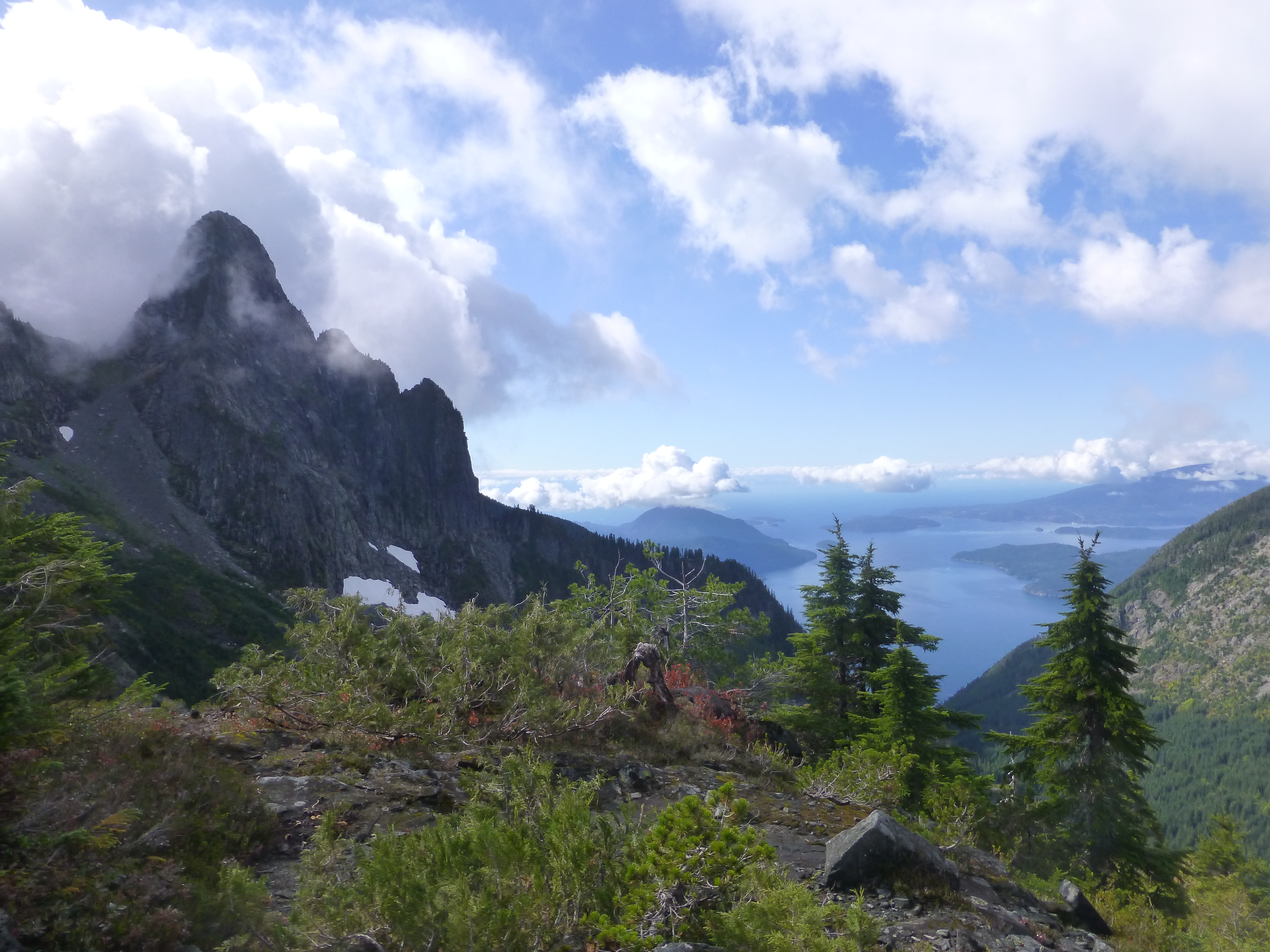 The month of October began with an early morning drive up to Lions Bay, British Columbia for a run in the North Shore Mountains. This was the first international trip for the year 2017, and what better country to visit than Canada. Apryle and I were first intrigued with the Howe Sound Crest Traverse, an 18-mile point-to-point along a mountain ridge, but decided that this feat was better saved for a day with a few more hours of daylight. Instead, we landed on lollipop loop starting and ending in Lions Bay from the Sunset Trail Head. From the photographs of the area, we knew we were in for an excellent hike, but the adventure exceeded all of our expectations.

It was a cool morning; mid 50s and overcast, the pavement was damp and the vegetation was glistening from the previous day’s rain shower. The forecast was clear and we hit the trail, which was an old logging road that gradually narrowed as we ascended. The road switchbacked eastward for about 2.75 miles as we gained 1300 ft vertical feet before reaching a fork in the trail. We chose to take the path to the right and head south on The Lions Trail. This stretch featured a wooden bridge and a cascading waterfall, as well as glimpses of Howe Sound to our west. However, the most memorable attribute was the unrelentingly steep ascent over exposed roots which anchored towering Firs.

The Lions Trail encompassed the lions share of the climbing with over 2200 vertical feet of ascending in just 1.75 miles. We came to a saddle and were treated to panoramic views of the peaks to our east and the sound to our west. It was here that we reached the junction with the Howe Sound Crest Trail and began following its course as it wove between East and West Lion. Unknown to me prior to documenting this trip, the Lions Peaks are somewhat famous, inspiring the name of Lions Gate Entertainment which was founded in Vancouver in 1997. The surrounding mountains reminded Apryle and I of the mountains in the Urubamba Province of Peru, and West Lion in particular reminded me of Huayna Picchu. In addition to the geologic similarities, the shroud of mist and fog that was sporadically cloaking the mountains added to the illusion.

The Howe Sound Crest Trail was an exceptional stretch of the loop which skirted along a ridge that was punctuated by three named peaks. Though on this jaunt, we experienced only a short swath of the 29 kilometer trail which extends from Cypress Bowl to Poreau Cove, we hope to return to enjoy the traverse in its entirety. The Howe Sound section encompassed miles 4.8 to 7.3 and featured some of the most exposed and difficult terrain which cumulated in a net loss of elevation but had its share of ascending as well. After connecting with the HSCT we summited Thomas Peak, which is flanked by the two Lions and then we make a steep descent along the southeast wall of West Lion. The descent is followed by a narrow ledge that opens up into a wider trail that follows the crest line.

Running along the crest is slow going, but with the stunning scenery, who would want to go fast? The second mountain on the ridge is James Peak, which requires some fun rock scrambling and even has a rope and chains on the north side to assist with a precarious hop down onto a slanted rock slab. Though the rope and chain are a bit overkill, it adds to the adventurous component of this diverse loop hike. We met another hiker on top who warned us to keep an eye out for a bear that he startled about 500 meters to the north. We were on guard as we meandered through the wider upland meadow section, that appeared to be ideal bear habitat. Fortunately, ideal Bear habitat often is also ideal habitat for Blueberries. We loaded up on the tasty berry before making our final ascent to David Peak.

David Peak was heavily forested near the base compared to the previous two, but near the summit, it transitioned to gravely scree. This peak even had a summit log which dated all the way back to 2014… and also one fictitious post alluding to Nixon from 1973, or perhaps they confused the name and dates under the circumstances. Before escaping the high mountain politics we lingered on the summit to watch a daring helicopter pilot weave around the summits before disappearing to the southwest. We began the steep muddy slide down to the saddle at the headwaters of Harvey Creek. This was the most challenging and subsequently the slowest portion of the trip. We found ourselves climbing down 12 to 15 foot ledges with slippery rocks and roots for hand/foot holds.

We were excited to reach the saddle and elected to take a left at the fork and descend the ridge westward along Harvey Creek. The trail was initially quite wide and the substrate was speedy gravel and we were ready to let it fly down to the trailhead. We let it fly for about 200 meters and our plans dropped like a ballon with lead in it, as we hit a wall of green vegetation. We rambled on none the less. The trail conditions were similar to the Crow Pass traverse, ten foot alders overhead and abrasive raspberry bushes which hung over the clearing, and a rocky brook that we trampled underfoot. Finally after bushwhacking our way from miles 7.3 to 9.5, we reached the stick portion of the lollipop completing our misty mountain hop. In just 2.8 miles on the logging road we were back at our versa and heading down by the seaside.

Travel Distance: 340 miles from Newcastle to Lions Bay and back to Newcastle

Boarder Crossings: 2 (USA to Canada and Canada to USA)