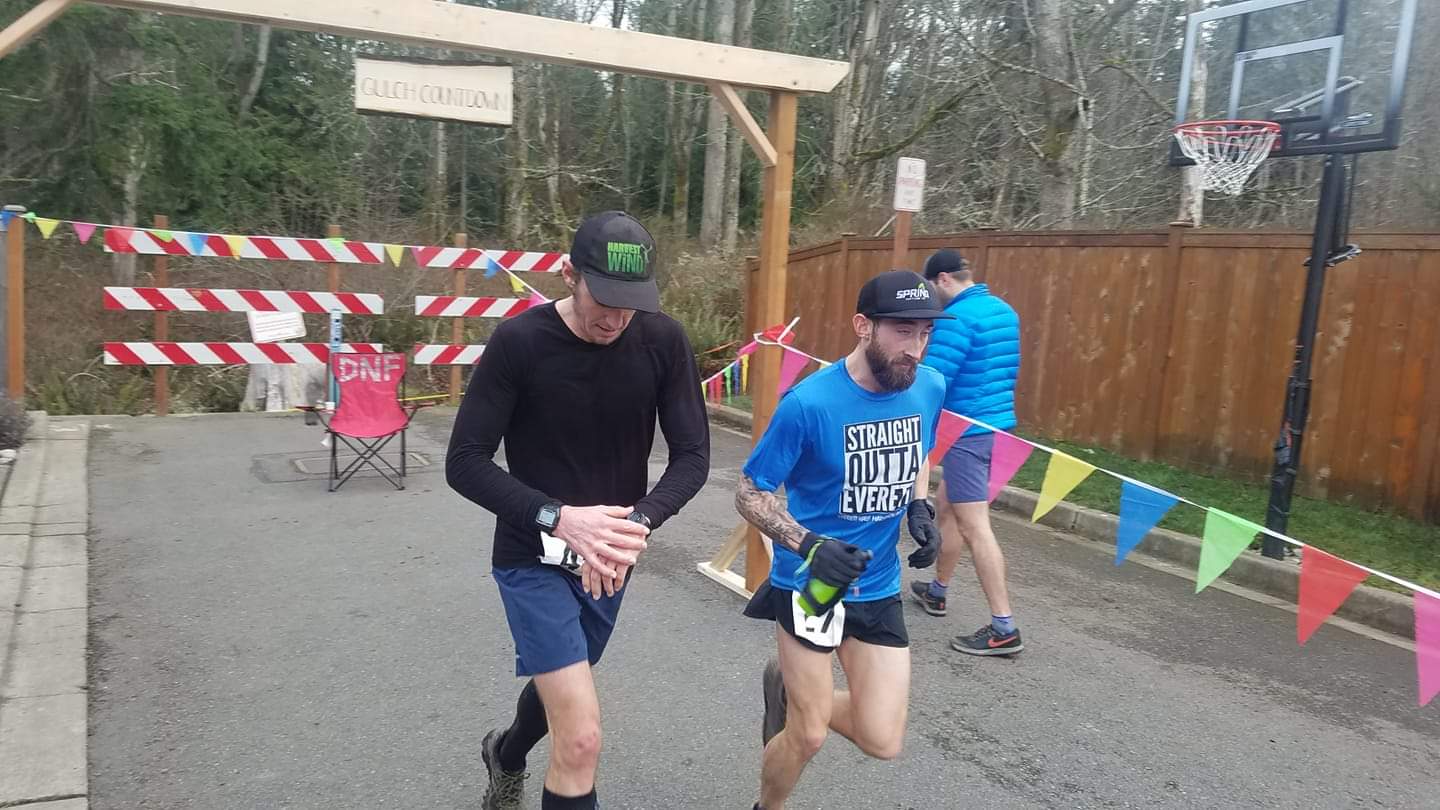 On January 5th 2019, Abram Elwell, Adam Braddock and the Japanese Gulch Runners hosted the first annual Gulch Countdown. The course is a 2.18 mile single-track trail with about 250’ of elevation gain which reversed direction with each completed lap. Additionally, after each loop, the time to complete the next loop decreased by one minute (up to the marathon distance) and then 30 seconds was removed from there onward. The end of each lap was the same as the start time of the next lap, therefore, lap speed dictated rest. The need to continually decrease the time as the miles accumulated made for a unique and fresh take on a trail race.

The race started and finished in Adam and Josie Braddock’s driveway and quickly entered the trail network of Japanese Gulch. The start/finish area was a small party, with several spectators, race timer, and a complete aid station. The terrain was mild and most of the hills were on the north end of the course. The weather was perfect, with temperatures in the 40s and overcast to partly sunny skies with no precipitation. The trail conditions were slightly muddy, but seemed much drier than typical winter gulch trail surface.

Apryle and I ran the first seven laps together with a goal of keeping the pace conservative to take advantage of the lengthy cutoff times. I was sure to be proactive with both water intake and calories in order to bank away energy for the latter stages of the race. Apryle and I made it back to the finish line comfortably, with about 3 minutes to spare for the first few laps, and chatted with other runners around us. We were fortunate enough to catch up with Nick Pembroke, one of our companions on the Enchantments run back in September, and also meet a few new runners and compare notes on iconic PNW trails.

As the time lowered, I grew more nervous and increased our pace progressively, worrying that we might get bottlenecked out of the finish chute. However, this seemed to be a misstep as Apryle fatigued into the seventh lap and I bolted on the final hills to ensure that I would make the cutoff. She came in with seconds to spare and decided to call it a day, and was struggling with nausea the remainder of  the day.

I decided to run the eighth lap fast, because I wanted to take aim at Adams CR while my legs were still mildly fresh. I managed to click off a 16:28, winning myself the loop and a nice long rest break to refuel. I dialed it back slightly and enjoyed some quick miles with John Maxwell, who was perennially at the front throughout the race. Several other runners continued on to the marathon distance, but dropped or missed the cutoff beyond the twelfth lap. That left John and I alone on the course to duke it out for the honors of last man standing.

I felt that John looked stronger than me, despite running the overall event much faster from the start, but on lap 16, I was able to put a measurable time gap on him into the finish. I completed the loop with about 2 minutes to spare, and was hoping that the race was over, but John kicked to the finish with about five seconds on the clock. Therefore we both toed the line for another lap in the more difficult CCW direction. I tried to gap John from the start, and managed to keep the lead into the finish. Unfortunately, I missed the official 18:30 cutoff time by about 30 seconds, but still earned the title of last man standing.

Overall I was happy with the effort, I anticipated that I would be running somewhere between 35 to 40 miles and felt that my fitness assessment was accurate. The inverse proportionate race format is a brilliant and much more interesting twist on the Big Backyard style of racing. It allows for the perfect blend of endurance and speed and I hope that Abram has started a new trend! I want to say thank you to Abram for his impeccable direction of the event and to Adam and Josie for being welcoming hosts. I remember discussing a Gulch race with Adam back in 2016 and am glad to see that it has finally come to fruition! Thanks as always to Apryle, for sharing the first 15 miles and for the support in the second half of the race.

*Loop time does not include driveway section.