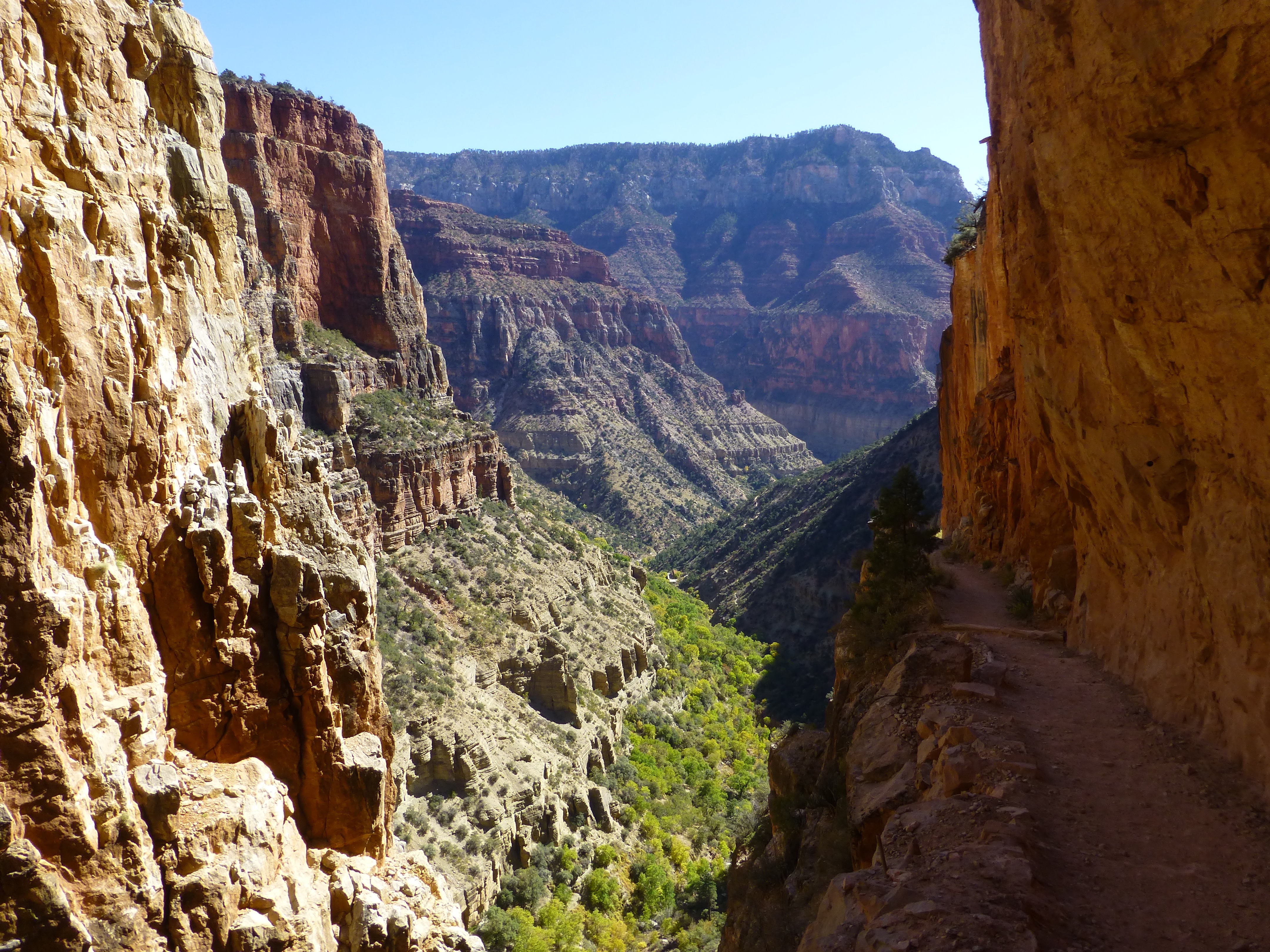 Rim to rim to rim is one of the most iconic trail running adventures in North America. It is not only rugged and strenuous but also one of the most picturesque wonders of the world. Adam Braddock approached me with the idea of running it this year and I was excited to tackle the classic traverse. After a couple of delays in timing, we landed on October 27th as the day and scheduled a three day turn-around trip to Arizona.

Adam and I left our hotel in Tusayan early in the morning and arrived at the Bright Angel trail head at 4:15AM. Unfortunately the combination of excitement and darkness made locating the actual trailhead location an unexpected challenge. Our official traverse began a little after 4:30AM and we started the long descent to the Colorado River by light of headlamp. The temperature was a cool 20 degrees but after a few minutes of running it felt quite comfortable.

The trail surface was sandy/dusty with a smooth gradual grade interrupted by the logs that created a stair stepping effect. The first 5.1 miles were highlighted by tight switchbacking trail until Indian the Garden Ranger Station. Here the steep slopes and high desert surroundings appeared to transition to a forested riparian zone (but it was still dark so difficult to tell). There were a few stream crossings and a bypass trail following our first checkpoint. We took some time to enjoy the starry skies for the next 3.6 miles and arrived at the Colorado River around 6:15AM (8.7 miles).

Upon reaching the river, the sun began to illuminate our surroundings and we witnessed the dramatic landscape of the Grand Canyon. We crossed an impressive suspension bridge at mile 10 that led us to Phantom Ranch Ranger Station. This post was buzzing with activity; there were hikers refilling water, campers packing up tents and Mule Deer grazing. We spent some time here filling up water, applying more sunscreen and shuffling away warm clothes.

We continued northeastward along the Bright Angel Creek where the North Kaibab trail trended gradually upward (6000ft climb) as we wove our way through the narrow canyon walls. The low growing vegetation was intermixed by dilapidated phone line posts and wires, remnants of an old means of communication. The narrow canyon gave way to a wider valley with typical desert scrub community highlighted by the tall stalks of the Utah Agave. Additionally, the canyon walls began to form more interesting shapes and show different layers of color.

We reached Cottonwood Campground at about 8:30AM (17.2 miles) and enjoyed the shade of the cottonwood trees while refilling our water bladders. This was the fourth major water filling station (that I can recall) of the trip making this an incredibly easy traverse in terms of hydration logistics. I watched the Southwestern Willow Flycatchers hop between bushes and Spotted Towhees foraging on the trail ahead. We were topped off with water and ready to begin the long ascent to the north rim. The following miles were some of my favorite of the trip as we continued up the Bright Angel Canyon.

We crossed the cottonwood bridge (my second favorite bridge of the traverse) and made our way to the Manzanita rest area. We did not stop and continued onward to steeper switchbacking trails up through the canyon. Here the desert scrub community shifted to Pinyon Pine, Utah, and One Seed Juniper Woodland. We passed through the Redwall Limestone cliffs while Common Ravens soared overhead.  The beautiful Roaring Springs tumbled off the canyon wall in the distance adding another element of beauty to the climb.

We crossed the final bridge (my favorite of the six) on the northbound route which I imagine resembled Hemingway’s vision for the bridge from For Whom the Bell Tolls. As we continued upward the structure provided a nice accent to the dramatic canyon wall backdrop. The next major checkpoint was the Supai Tunnel which gave way to yet another water refill station. We spent several minutes at this site and I filled my 2L bladder and ate some ginger, almonds and cherries. The vegetation switched yet again to Scrub Oak, Aspen, and Firs. With temperatures rising and the sun beating down it was refreshing to have some shade provided by the taller trees.

We stopped for some panoramic photographs at the spectacular Coconino Lookout and finished out the first traverse at the anticlimactic north rim (which was just a parking lot). We reached the North Kaibab trailhead at 11:30AM (mile 24), drank some more water and took stock of our calories (6 gels eaten with 8 remaining). We began our decent with the hope of negative splitting the effort. On the way back we stopped at the usual spots: Manzanita, Cottonwood, and Phantom Ranch. We reached Phantom Ranch at 2:30PM (38.6 miles). Here soaked in the views of the Colorado River and relished the fact that we were 3/4 through the run.

Instead of taking the Bright Angel trail back up to the South Rim, we decided to switch it up and take the South Kaibab trail out. We crossed the suspension bridge to the tunnel and then began the long six mile ascent (5000ft climb). After temperatures reached a peak (mid 80s) in the canyon bottom, the sun began to drop below canyon walls as we ascended, reducing the heat significantly. As we got higher and higher in the canyon, views got more and more spectacular. New buttes came into view and added even more interest with each passing mile. The sun was setting as we reached the top of the south rim and the bugle of Elk could be heard in the distance. Several cow Elk huddled around the water faucets while unintelligent visitors opened the valves for them to drink (fortunately no one was hurt). We took the shuttle bus back to our car ending our journey of 45.6 miles in 13 hours 14 minutes.

After a few hours of sleep in Flagstaff we were back on the road to the Phoenix airport in order to catch an early morning flight. Adam and I reflected on an amazing yet fleeting tour of the Grand Canyon. I am so fortunate to have experienced such an amazing place with such an awesome person, thanks Adam for having the vision to complete this iconic traverse.