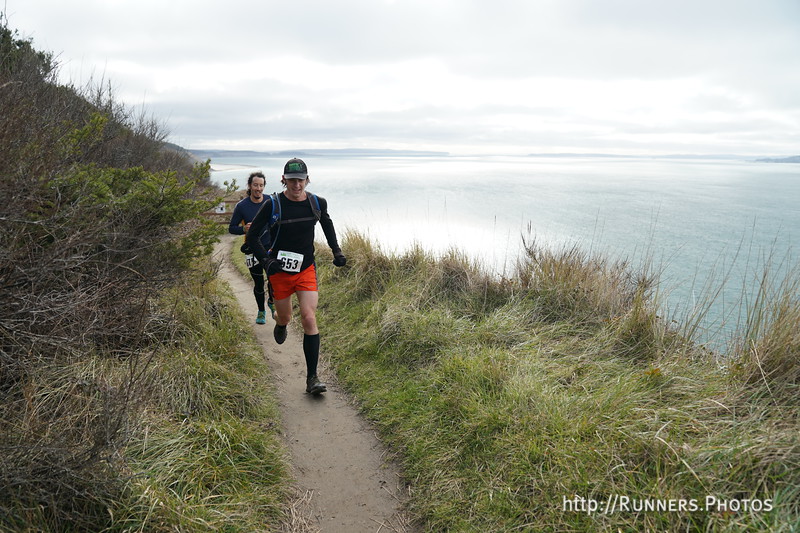 I decided to run the Fort Ebey Kettles Marathon again after a taking the last two editions of the race off in lieu of running the West Seattle Beach 50K (2017) and Black Canyon 100K (2018). In 2016 I won the event in a time of 3:28:31, under favorable conditions. This year I was able to capture the win but in a slightly slower 3:34:18, under even better conditions. The temperature ranged between 37 to 46 degrees and the overcast morning gave way to mostly sunny skies.

The course is always surprisingly difficult despite its unintimidating location on the gently rolling hills of Whidbey Island. The particular region of the island is dotted with kettle ponds which developed after large chunks of ice melted out leaving sizable depressions on the landscape. These depressions provide the courses undulating topography which packs 5500 vertical feet over the marathon distance. In addition to the large amount of elevation the course is circuitous in nature and does not lend to gathering momentum, even on relatively flat ground.

The unique geologic features, the gun battery, and the dense forest, in addition to the bluff trails offering views of the strait and the Olympics, make this a race one of my favorites not only in Washington but in the United States.

Just as in 2016, the race started on a bluff over looking the strait, before weaving off northwestward into the forest. And just as in 2016, I took off in the lead, but this year another runner was right on my heels. He matched my steps for a couple of miles and then we broke the silence and began to chat. I learned that he was Nickademus de la Rosa, a finisher of the elusive Barkley Marathons. We chatted for the next sixteen or so miles about races, gait, nutrition, and training and planned to pace with each other until the final aid station.

We reached the start/finish area in about 1:44, which was slightly off my 2016 pace, but we intended to continue to increase the effort. At most check points Nickademus said that we were ahead of the previous lap splits. This was encouraging, but to my surprise, somewhere around mile 18 Nickademus dropped back, which meant I had to finish out the final 8 miles solo. I tried to keep an honest pace but struggled to keep the tempo on a few of the small climbs nearing the end. I passed Apryle and good friend Adam Braddock on my way around the bluff with a mile to go and told them that I was likely to be five minutes slower than 2016.

I pushed the final mile and change and arrived about 9 minutes ahead of a charging Adam Hewey. I tried to reconcile with myself why I had been slower this year… was it the early race conversions with Nickademus that sapped my energy, was it my motivation, or was I just not in as good of shape this year. Apryle and I decided not to think too much more about it and we stopped by the market to pick up some red peppers for our new Parrot friends at the Flying Colors Aviary. We closed out our second trip to Whidbey Island for the year with the beautiful Parrots of Langley.