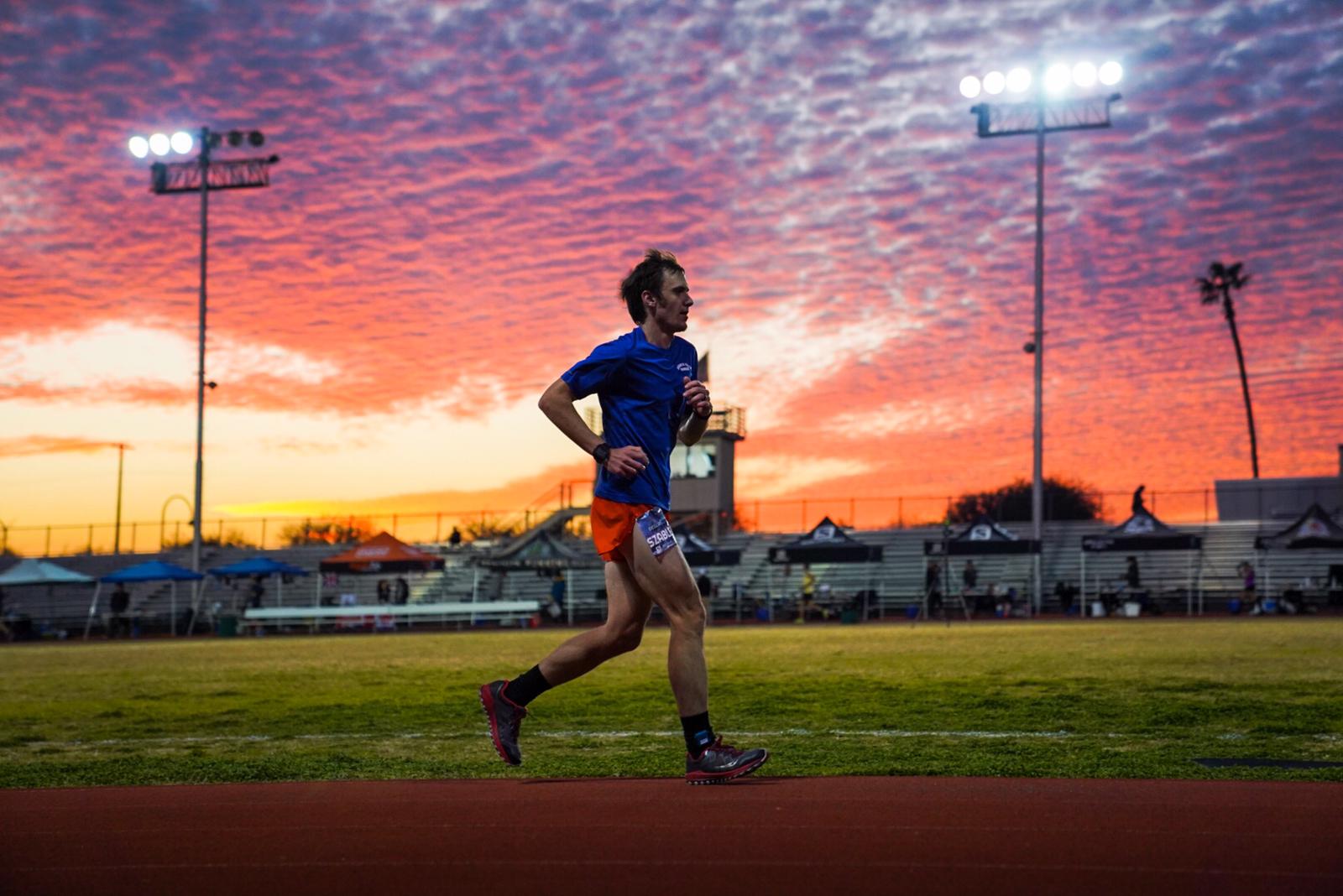 I first considered running the Desert Solstice 24 hour race while pacing my friend David Huss at Teanaway 100 this September. He intended to run the track event in December and with his insistence, I considered signing up. I had always been curious as to what sort of time I could run a flat hundred mile in, but never made it a training focus. When I visited the webpage, I saw that I probably could not even qualify for the race because I did not meet the standards. However, because of the 2019 world championships, the race director, Hayley said that there would be room for me on the start line.

I had an ambitious trail running schedule in September and October, which consisted of an Acadia National Park traverse, hosting my first trail race in Whistler Canyon, and running the Grand Canyon rim to rim to rim. These three activities each required a good set of climbing legs, and a significant amount of trail time in order to prepare. Therefore, in order to begin DS24 training while also maintaining mountain trail fitness, I incorporated a mix of flat, fast, short loops, and hilly, slow, long days.

I signed up for Grand Ridge 50K in early November in order to leverage my fitness from mountain training, and also complete a long run tune up. This small local race went quite well and was a nice confidence boost for Desert Solstice. Following Grand Ridge 50K, I switched almost exclusively to flat training. I tried to accumulate as many short gravel loops as possible around Confluence Park, local tracks, and retention ponds.

I arrived in Phoenix on Friday December 13th, with David Huss and Ryan Thrower from Seattle, and we met up with Scott Traer, who had flown in from Denver. We attended the prerace dinner and Scott and I shared running stories for most of evening. David and Ryan picked up Scott and I on Saturday morning and we made the short two mile drive to Central Highschool Track. We set up our table and reviewed our aid plans with Ryan, who was kind enough to crew for all three of us!

The race began at 8 AM with twenty-one starters, each with different distance targets and race plans. I tried my best to keep a conservative pace, but that was incredibly difficult because I was tapered and running on the easiest surface imaginable. The weather was sunny with temperatures in the low 70s, not too warm, but when compared to 40s and rainy in Issaquah it was a little shocking to the system. I ran my first 50 kilometers in 4:23:11 (8:28 mile pace), which felt very pedestrian at the time.

My biggest goal during the race was to take in as many calories as possible in order to fuel the system. There was a large tent set up at the 300/100-meter mark with numerous food options, and each time a new one was offered I tried to grab it and eat it on the fly. In addition to the real food options, I supplemented with gels and Tailwind. This strategy worked out well for the first third of the race.

The temperatures reached their peak just after midday and as the sun began to set, the running became more comfortable. I had been running alone mostly, chatting briefly with David or Scott as we passed by one another, but approaching the 100 K mark, I shared a few laps with course record holder Pete Kostelnick. I ran the 100 K in a personal best time of 9:09:20 (8:50 mile pace). At this point I really began to fall off my pace, I was relegated to occasional walking and my quads began to feel a little sore.

I always looked forward to the direction changes, which occurred every four hours. It was amazing how different the track felt simply running in the opposite direction. Even though the track was in an urban landscape, the slight difference in scenery was a welcome change. I tried to test my powers of observation on the track in order to divert my attention. During the daylight hours I enjoyed observing the flocks of doves, starlings, grackles and the lone hawk that was keeping in them all in check. During the night I used my music to keep pace like an internal metronome.

I reached 76.3 miles by the halfway mark, a distance that I was quite happy with, but knew I could not sustain in the second half. As each minute ticked by there were fewer and fewer people on the track, either because of reaching their distance goal or succumbing to fatigue. I was poised for a very substantial hundred mile personal best, but around mile 79 my digestive system turned and I began vomiting. Following this episode, I was unable to keep calories down consistently and my pace faltered even further. I reached the one hundred mile mark in 17:04:56 (10:14 pace), which was significantly slower than my prerace goal.

After reaching the one hundred mile distance, I began to walk and take a few extended rest breaks to see if I was capable of keeping down food with some seated rest breaks. After multiple laps of walking and minimal food consumption, my body temperature dropped. I decided to warm up in the locker room for a half hour and then I returned to the track to walk a lap. I decided to go straight back to the warm sleeping bag and stayed there for about two hours and twenty minutes. After the long rest, I emerged back onto the track with the hopes of running as many miles as possible in the remaining time.

It was strange to be back on the track running, and I felt great to be back on my feet. I watched the sunrise as the race clock approached the 24 hour finish time. I was able to muster up a sprint for the last 2400 meters and click off my fastest laps of the event. This indicates to me that I had too much in the tank and was not mentally tough enough to persevere. Although I am partial to shorter distance mountain ultra trail races, I will certainly attempt a 24 hour race again and this time I will be much better equipped with knowledge and experience.

I want to express my deepest gratitude to Ryan Thrower for all of his help during the race. Additionally, I want to thank Aravaipa Running for putting on an awesome event and all of the aid station workers that made this race so incredibly easy logistically. I also want to thank my wife Apryle, my parents, my in-laws, and everyone that followed along on the live feed through the night. I appreciate your support!