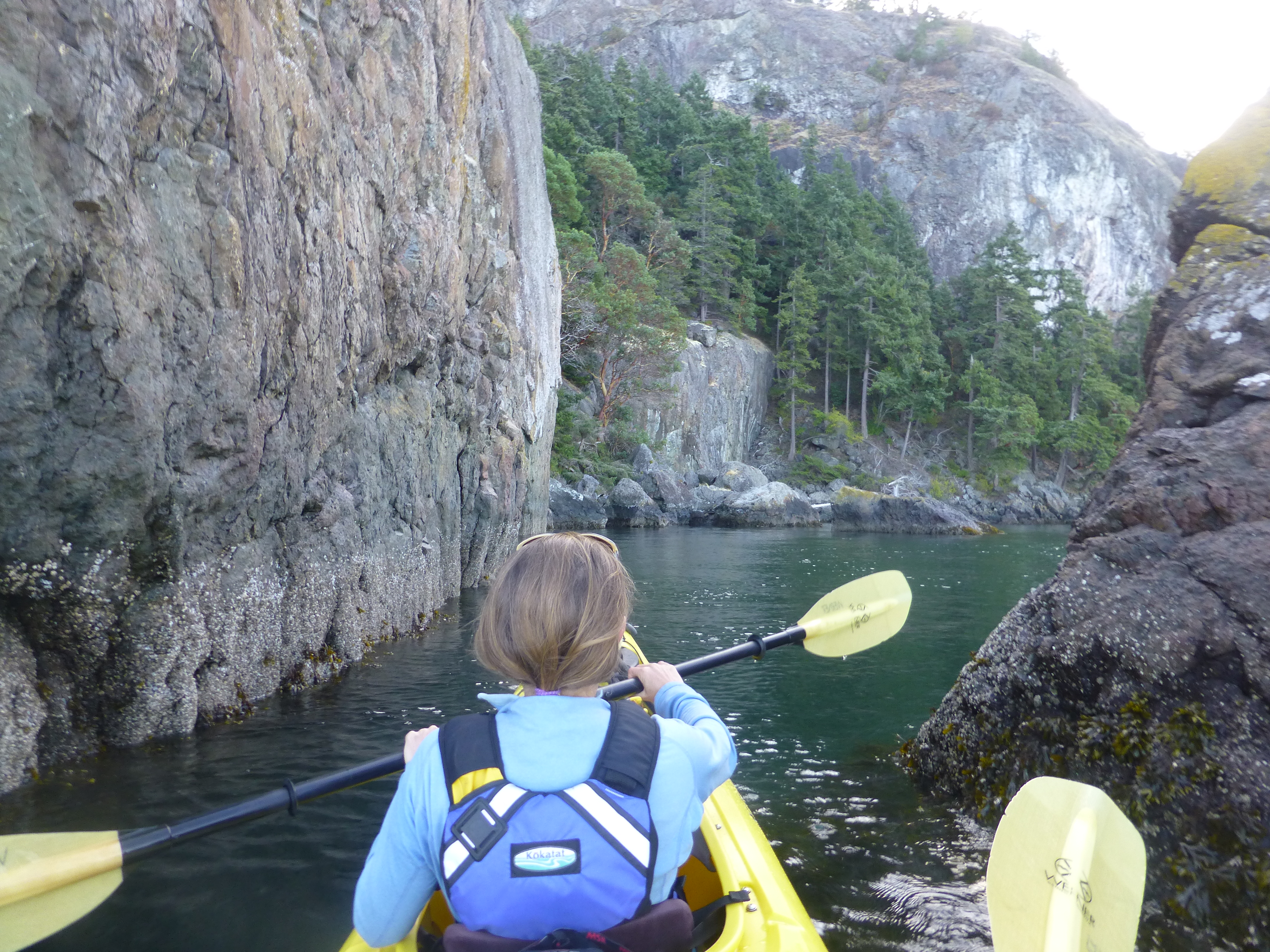 Apryle and I started our two day kayak adventure from Sea Farers Park in Anacortes on a partly sunny Wednesday morning. We loaded the tandem kayak full of food and camping gear and pushed off into the waters of Fidalgo Bay. The first leg of the journey consisted of a jaunt through the Cap Sante Waterway into the Guemes Channel. We hugged the coastline of Guemes Island and after rounding the corner into Bellingham Channel we came ashore for lunch at the Yellow Bluffs.

After refueling we began the two mile Bellingham Channel crossing. This proved to be an exhausting effort and at points it appeared that we would never reach Cypress Island. When we finally arrived at Broughton Point we stayed close to the shoreline en route to Secret Harbor. Unfortunately the secrete was out, because this harbor was full of boats, probably due to the thousands of Atlantic Salmon that inadvertently escaped from a hatchery days prior to our trip.

With Atlantic Salmon jumping all around us in Deep Water Bay, Apryle and I cruised up the Cypress coast to the Cypress Head tombolo. The tombolo provided an excellent spot for a snack with views to both sides of the island. The third leg of our journey was highlighted by a trip around the Cone Islands. We were suspiciously welcomed to these waters by dozens of curious Harbor Seals. After noticing a small bird combing the rocks we landed for a closer look to identify a life list bird – the Black Turnstone.

After passing Eagle Harbor we followed the shoreline northward to Pelican Beach. Several sailboats were moored off shore, but the line of campsites was empty. We set up camp under a Shore Pine with an excellent view of the distant islands and the deep blue waters. I set out on foot to explore some of the island and found it quite interesting to get an insiders perspective (so to speak) on the island.

There is an impressive network of trails on the island considering that it is only 8.6 square miles! I first headed due west and ascended the 752 foot Eagle Cliff and then made my way south to the Duck Lake Trail and over to the Cypress Mainline, which climbed up a gradual wide grassy trail. Most of the island is full of towering Douglas Fir, Great Fir, Western Hemlock, Western Red Cedar, along with a few deciduous Maples and the unmistakable Pacific Madrone peppered through the forest. There is also a healthy population of Rocky Mountain Juniper which Vancouver mistook for Cypress trees; the namesake of the island.

After emerging through the trees, I found myself in an old airfield which I followed back into tree cover. I skirted along the shore by Eagle Harbor and made my way back to Pelican Beach, completing my trail exploration. Apryle and I made a sunset ascent to Eagle Cliff and then turned in for the evening after a long day of paddling.

We slept in until the sun told us it was time to get back on the water and made our way around the craggy northern tip of the island peering out at Towhead Island in the distance. We passed by our sunset destination of yesterday and paddled through Smugglers Cove. At this point we were on the western side of the island and in the waters of the Rosario Strait.

The current was with us and we were making great time heading south to Tide Point. As we approached, the “No landing, wildlife reserve” signs came into view. There was also a house tucked in just behind the trees, suggesting that maybe this was a private reserve. A lone White Winged Scoter was navigating the surf while the currents were running like a river at the point. I was excited to think we would get a free ride down the west side of Cypress. However, just past Tide Point things seemed to switched and we started paddling into the current. I thought maybe the fast current around the point might be causing an eddy, but as we paddled south, the kelp continued to flow north as we paddled south.

Eventually, Strawberry Island came into view, followed by Strawberry Bay. Strawberry Bay holds the largest housing density on the island. I think we counted 25 houses, some of which may have been sheds. The bay felt crowded so we paddled on out of there pretty quickly. A huge oil tanker passed us, also headed south. During the final stretch of Cypress, we came upon a family of black oyster catchers scouring their rocky home. Based on differences in appearance and behavior, it appeared there were two parents and two juveniles. The parents were looking for food, their bright orange eyes scanning the rocks and their bright orange beaks probing the crevices. The juveniles, with their dark tipped beaks and dark eyes, hung back on shore. The parents were banded.

We came upon a cool cave that had been hollowed out by the pounding waves. The narrow beach was barely enough to land on but we pulled up for a snack. It was a good thing because we were both hungry and our original plan to land at Reef Point was not a possibility due to the boulders along the coast. As we rounded the point and started east along the south shore of Cypress, we saw seals hauled out on rocks. On one rock, a noisy mother was nursing her 2 pups. Their shiny heads popped out of the water then disappeared silently below.

We were prepared for another tough crossing between Cypress and Guemes and decided to stretch our legs before committing. We stopped at the South Beach, which forms the south east corner of the island and took a short walk up the South Beach Connector Trail. When we got back, we walked the beach a bit, checking out the driftwood, shells, and a land-locked chiton. After returning home, we learned that several species of chiton are known to exhibit homing behaviors, journeying to feed and then returning to the exact spot they previously inhabited. Chitons are generally herbivorous, eating algae, barnacles, and smaller meals. The chiton we found was affixed to a plastic bin and probably pretty hungry. Zach moved him to wetter ground.

The return trip across Bellingham Channel seemed to go a bit faster than our outgoing journey. We encountered some large boat traffic as we paddled east along Guemes. An oil tanker was headed west while the Guemes Island Ferry was waiting to head south, all the while a personal boat was returning to a launch next to the ferry terminal. Just after the ferry headed south, we squeezed through the shoot below the ferry terminal and continued back to Seafarers.