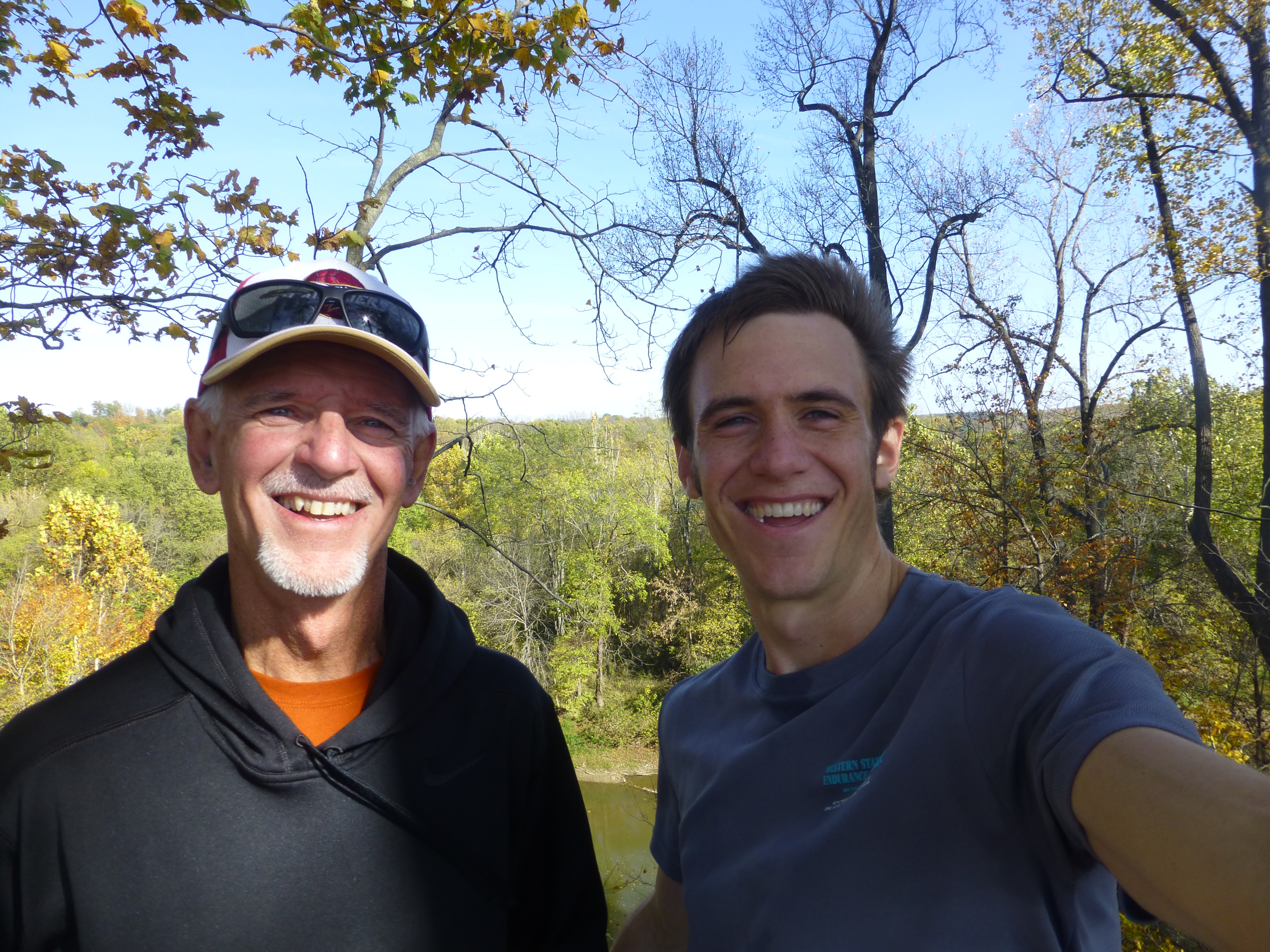 Based on my previous post, one might observe that I have an affinity for my local wilderness parks. Therefore it comes as no surprise that I would test my abilities at the Cougar Mountain 50K held on October 29th. Despite a long year of training and racing, I felt rested and ready to throw myself back in the ring after a 55 day hiatus from competition. The weather was ideal, with temperatures in the mid 40s and overcast skies on the early autumn morning.

There was a miniature reunion at the race headquarters stationed at the Sky Country Trailhead, Michael Havrda was working the event, while Dan Bucci (relay teammate from my time in Texas), and my eastside training partner Christophe Fiessinger were both running the 50K. I felt very relaxed and confident on the start line and was aiming for a sub 4:30 race despite the 7200 vertical feet. I knew every inch of the course and felt compelled to defend my home turf with a win.

The race began with a contrived, shoe soaking ¼ mile lap around a dew covered grassy field before hitting the real course on the wide gravel Clay Pit Road. A left turn onto Klondike Swamp Trail begins the single track that dominates the course. I was surrounded by the quintessential hues of autumn and felt as though I was back in my home state of Ohio with the leaf littered ground. While I was nostalgically meandering through the woods, I noticed I was being closely chased upon turning to ascend the Lost Beagle Trail. Snapping back to reality and realizing he was not looking for his Beagle I picked up the pace.

The next stretch of course was a 2.5 mile loop in the northeastern corridor of the park where we descended off of the side of Antiaircraft peak via the Shangri La and Surprise Creek Trails. I Lost the Horizon on my way down to Tibbets Creek but made my way back along the Tibbets Creek/Marsh Trails before diving southward on the Antiaircraft Ridge Trail. The ridge trail faded into the Cougar Pass Trail and the landscape opened up to the historic Clay Pit and the first aid station at mile 5.8.

I had my new hydration pack complete with 2 liters of water, 700 calories of Tailwind, and several gels so I did not find it necessary to stop. I continued down the Mine Shaft and East Fork Trail thinking that I had dropped my closest competitor. The vegetation surrounding the East Fork Trail created a tunnel of brilliant fall color. I jumped out of the tunnel onto the wide gravel Fred’s Railroad Trail and followed it briefly before gingerly navigating my way through the twisty narrow Shy Bear Trail.

I then began the ascent up toward my favorite peak in Cougar – Wilderness. Although it was not my most efficient trip up to the prominence, I was prepared to cruise down the Wilderness Cliffs Trail. After several dozen switchbacks and significant elevation loss the course merged with the Squak Connector Trail. The trail flattened for a short time before making a steep descent down a wide gravel road leading to SR 900. The ground was slick with wet leaves which were masking groves in the gravel road. I reached the second aid station at mile 9.6 without turning an ankle, grabbed a gel and then darted across the road.

From there the course was modified slightly from the way in which I typically accessed Squak Mountain. Normally I follow SR 900 to a small trail entrance at the West Access trail opening but for the race a path was cut through some private land to avoid road any road running. I enjoyed the minor change as I began the brushy ascent upward toward Central Squak Peak. The overgrown weeds gave way to a forested mountainside and I glanced over my shoulder to find that I had company once again. I picked up the pace on the climb and noticed that I had gapped my competition again before hitting the East Side Trail which skirted around Central Peak.

It is in Squak Mountain that the Cougar bares its teeth with the two largest topographical incisors of the race. This section is subsequently my favorite, I love the rugged steep single track, which bring back pleasant memories of winter training. After passing to the east of Central Squak Peak via Phil’s Creek Trail, things speed up down the smooth forest service road to the May Valley Entrance. The entrance serves as Aid Station number three at mile 15.4 and here I realized once again that the distance I created between myself and second place on the climbs was eviscerated on the descent.

I ran through the aid station and began the trudge to the summit of West Squak Peak where I hoped to create a measurable lead. The May Valley Loop trail is heavily forested with Firs and has a completely different vibe than the more deciduous trails of East Cougar Mountain. In this section of the race I felt much further from home, both physically and psychologically. But at the same time I also felt that I was in my element. When I reached the Bullitt Gorge Trail I felt stronger with each step. I crested the West Summit around mile 18 and second place was nowhere in sight.

I skipped down the West Summit trail where the course merges onto the Chybinski Loop. From the Chybinski Loop to the West Access Trail it was all down hill to SR 900. It did not occur to me that my lead might once again be under attack on the long descent to the fourth Aid Station at mile 21, but after crossing the road and starting up the Squak Connector Trail I caught a glimpse of my pursuer once again. I vocalized my frustration and mustered my climbing legs once again for the arduous upward battle against the Wilderness Creek Trail. The Wilderness Creek Trail curved to the left and became the Long View Peak Trail and the then after passing by the peak, the old adage ensued and the trail plummeted down the Deceiver Trail to Cabbage Creek.

After crossing a wooden plank bridge a short uphill followed with a left turn onto Shy Bear Trail. I was entering a section of the park that I knew well enough to navigate blindfolded. However, I was running scared because I was quite nervous that the runner behind me could overtake me at any moment. It was evident that he was a stronger downhill runner but I still had the edge on the uphills, so I tried to push the Far Country Trail switch backs as hard as I could. At the base of the switchbacks I turned right onto the Indian Trail before beginning the ninth major climb of the morning with a left turn onto the De Leo Wall Trail.

The De Leo Wall is normally one of my favorite regions of Cougar Mountain, but my tank was teetering on empty and my legs were not turning over on my way to the summit of Marshall Hill. I reached aid station number five at mile 26.4 near the water tower and shortly there after Apryle was there cheering me on. I was excited to see her and she gave me the boost I needed to pick up the pace on my way down to Redtown. It felt like a different day, the temperatures were climbing into the upper 50s and a bright sun was overpowering the clouds.

After making quick work of the Marshall Hill Trail I turned left and took a walk on the Wildside Trail. After crossing Coal Creek I was at Redtown Trailhead and I could begin to fantasize about crossing the finish line in course record pace. I pressed my advantage on the flat Redtown Trail, looking over my shoulder several times expecting to see second place chasing close behind, but I saw no one. From Redtown Trail the course turned back onto Indian Trail briefly before redirecting westward on the Quarry Trail. The Quarry Trail made a tortuous ascent to the mellow Fred’s Railroad Trail. Apryle was cheering me on up the Quarry Trail but I was feeling dizzy and relegated to a dismal walk.

As soon as the slope gave way to flat ground I began my kick into the finish. I sprinted along Fred’s Railroad Trail, bounded my way down the Bypass Trail, ditched my walker on the Old Man’s Trail and finished the race in a course record 4:29:50. I was elated but Apryle and I agree that if I had eaten one additional gel around the De Leo Wall climb that I could have shaved another 4 or 5 minutes from that time.

The course design was perfect, the best race in the greater Seattle area. The course markings were excellent thanks to Ghislain Devouthon and Uli Steidl. The race was well organized thanks to Dustin, Kati, and Michael. The aid stations were well staffed thanks to many dedicated volunteers. The weather was perfect thanks to the temperate maritime climate. The finish was memorable thanks to my supportive wife Apryle for being there to cheer me on! Overall the race was an excellent experience, and one of my favorites of all time!