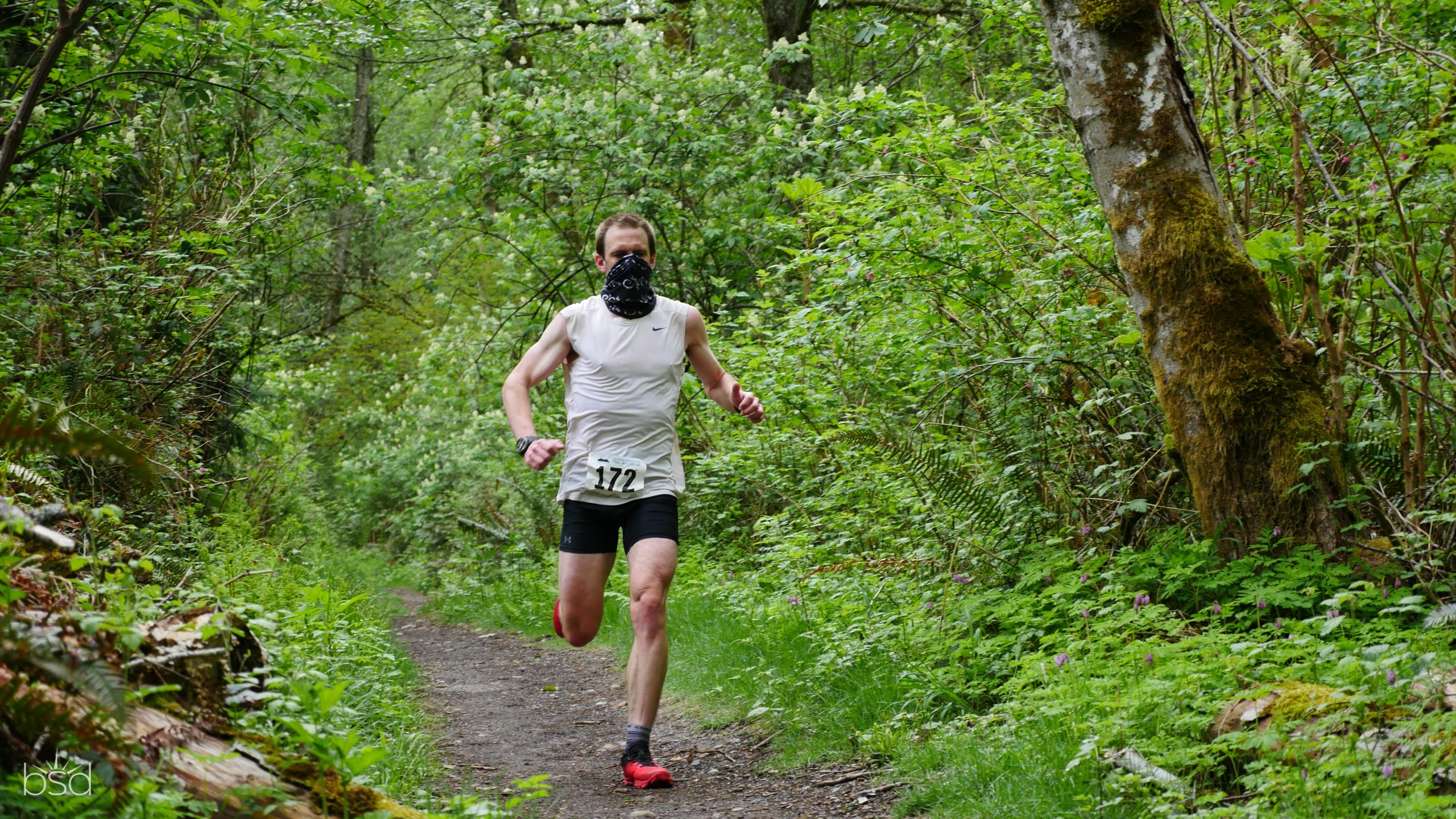 Following the Badger Mountain 50 miler I took a lengthy hiatus from racing, and by lengthy I mean one month… I thought I would try a shorter trail race for once, and the Cougar Mountain 10.8 miler was a logical choice. This is a Seattle Classic hosted by the Seattle Running Club with my good friend Michael Havrda coordinating logistics. So far in my time racing on Cougar Mountain I won the marathon (2016) and the 50K (2017). Additionally, Apryle took second in the marathon in 2019. So it was finally time to break the long drought of Cougar Mountain racing and toe the line from Sky Country trailhead once again.

The race starts from the Sky Country trailhead (May 8th) and explores most of central Cougar Mountain in a series of loops that undulate through the heart of the park. The trail is well groomed with crushed gravel or packed dirt and the occasional boardwalk. The dense canopy consists mostly of fir, cedar, hemlock, alder, and maple. The forest floor is carpeted with salal, Oregon grape, devils club, and sword fern.

The opening miles include a loop around Klondike Swamp, Harvey Manning, Cougar Pass, and Tibbetts Marsh trails en route to the Clay Pit area.  I started off fairly quick, trying to stick on the tail end of the 5-mile racers who started at the same time. The route starts fairly mild; with nothing more than a 300 foot climb in the first 2.8 miles (20:15) to the Clay Pit. I was not aware at the time, but I passed the eventual second and third place runners, Ritvik Mishra and Erik Hoeg (both of whom I started running with later in the summer). I ramped up the pace as I descended East Fork trail to Fred’s Railroad trail.

The real fun began with the climb to Wilderness Peak via Shy Bear and Wilderness Peak trail. I like to think of climbing as my strong suite and I put some more time into my chasers on the ascent. I reached the peak at mile 4.8 in 34:46. After reaching the courses highpoint (1560 feet), I began the switch backing descent of Wilderness Cliffs. I do not find descending to be very cardiovascularly taxing, but that is probably because I am a weak technical downhill runner. In just one mile I lost 750 vertical feet and probably some time out of my lead.

At the Wilderness Creek trail junction, I began climbing back up to the Shy Bear junction, which marked mile 6.7 (53:46). I knew at this point that I would not be setting any course records, but I was motivated to keep a quick tempo to hold on for the win. I took the Longview Peak trail to the summit spur and then descended the Deceiver trail. My mind started to drift and I was losing focus as I transitioned back onto the Shy Bear trail, but when I reached Fred’s Railroad at mile 8.7 (1:10:37) I was ready to start my finishing kick. I closed out the final 1.3 miles in 8:17, which was a circuitous route back to Sky Country via Bypass, Cave Hole, and Nike Horse trails.

My final time was 1:18:54, good enough for first overall. Although the race is billed at 10.8 miles, my watch said 10 miles with 1,926 vertical feet. Overall, I was happy with my effort, considering it was my first short trail race in a very long time. It was fun to test my legs on the trails at a quicker pace and I hope to incorporate more short trail races in the future. Thanks to all the race directors and volunteers for putting on an excellent event.