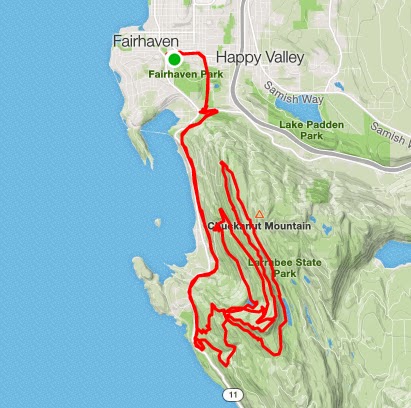 In regards to the SAID principle, conditions could not have been more perfect for the Chuckanut 50K. My body had adapted to a specific weather pattern – 40 degrees and rainy. The perpetual cloud that has descended upon western Washington this year allowed me the opportunity simulate race day conditions on a regular basis. The slick mud and endless puddles on the trail was a welcome reminder that I was right at home and in my comfort zone.

In addition to the weather tolerance preparations, I believed that my 840 miles and 128,000 feet of vertical would prepare my body for the imposed demands of the race. With about a dozen long runs/races over the 20 mile distance and two 50K races under 3:30, I was certain that I could tackle Chuckanut in under 4 hours regardless of the conditions. Unfortunately the end result of my race was nowhere near my goal, and I found myself in 20th place with a time of 4:15:17.

Although I only made it up to Larrabee State Park once to preview the course, I believed that my backyard served as an adequate substitute. Both Cougar and Squawk Mountain Parks served as my daily training grounds. Each weekday I would run roughly 10 miles with 1300-1800 vertical feet and on Saturday/Sunday I would run 20+ with 3000-6000 vertical feet. I found myself doing very little speed work, but thought the hills would be a sufficient substitute. Ironically in the race, my speed on the flat sections seemed to far outshine my atrocious performance on the hilly midsection of the course.

At any rate, my experience at Chuckanut was exciting and enlightening, but also miserable, and demoralizing. Ultimately, my emotions in regards to the race were a net positive. The race was exciting due in large part to the concentration of elite competitors from all over the nation. It was enlightening to discover the pace needed to keep up with those elite competitors. The misery was due in large part to Chin Scrapper and the pain it inflicted in the latter stages of the race. The race results were a little demoralizing, simply based on the effort/performance ratio. However, if I only ran for sake of finishing among the top echelon then I would have hung it up years ago.

I will always keep lofty goals that are far out of my reach, it gives my training purpose and keeps me focused. I came up a few places short of All-Ohio in high school cross country and track, I imploded in my senior year of college and never toed the line at Nationals, and my trail/ultra career continues to fall short. However, this is all fuel on the fire to continue training harder (and maybe one day smarter), and as long as I have the capabilities of controlled falling I will not stop.

The race started at a park in Fairhaven, and I tried my best to latch onto the lead group that were clicking off 5:40 miles with ease. I was detached but managed to run my first 10K in about 41 minutes, and bank away some time that I would certainly loose on the hilly stretches. As soon as we hit the single-track section and began ascending I lost a few spots, but picked back up a few on the down hills. On the Cleator Road ascent I felt like I was getting my second wind and tackled the incline quickly, but once I hit the ridge trail I realized how deficient I was on slightly more technical terrain.

The trail toward Lost Lake was very runnable and I swapped positions with a few runners, but Chin Scrapper buried me in a hole I could not dig myself out of. After a pathetic 17 minute climb, I tried my best to use gravity to my advantage on the long descent. The biggest problem with the last 10 miles was motivation… I knew I was not going to break four hours and I knew I was way out of the top ten. It was encouraging to see Apryle at the final aid station, and I decided to finish out the race with a strong kick. Someone said it was a battle for 20th place and in my head I was thinking who cares, but in my heart I knew I had to hold that position.

At the end of it all I took home four positives from the race.