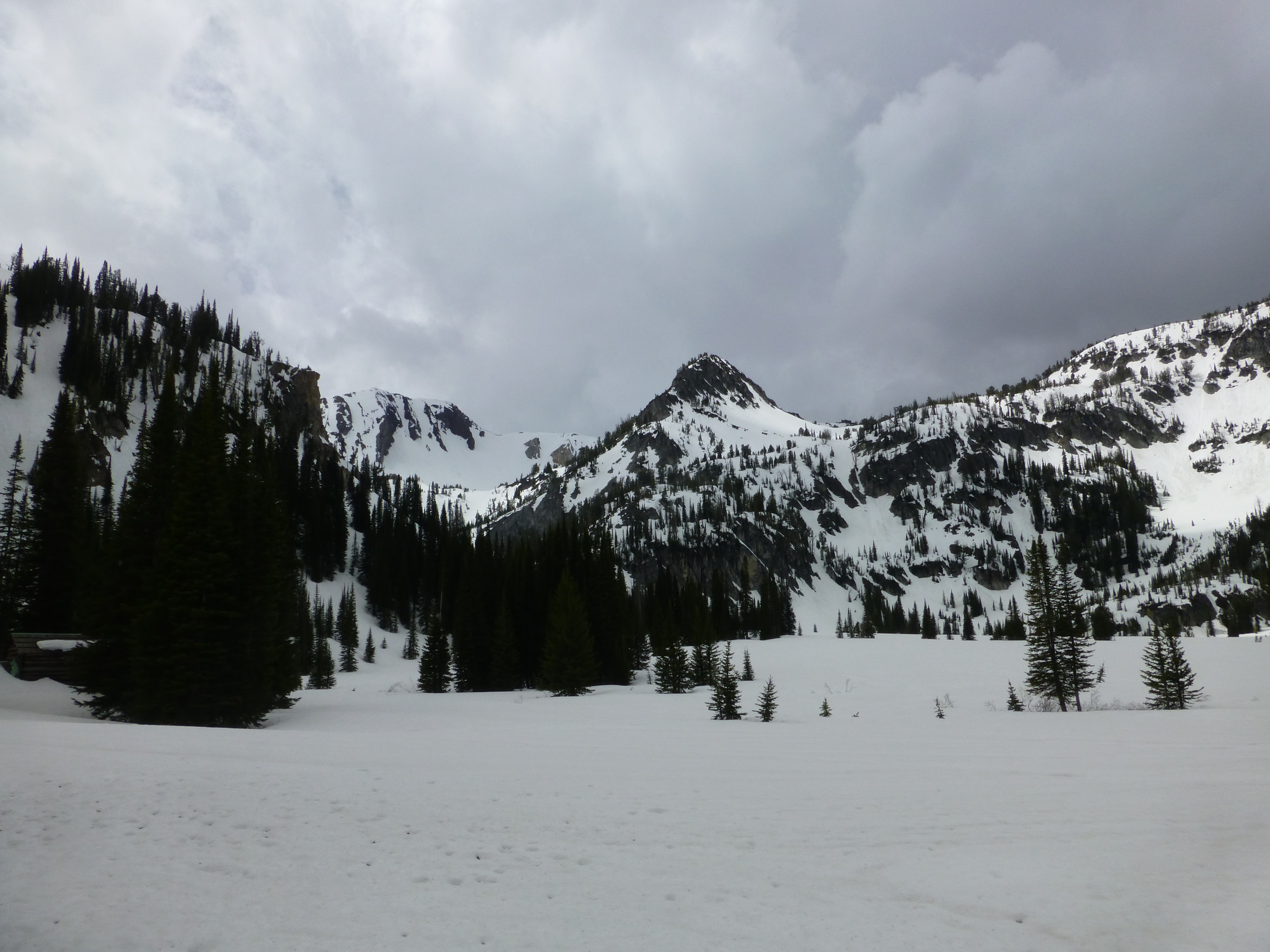 The alarm sounded at 4:45AM and Apryle and I began stirring about the room gathering all the provisions we would need for a weekend trip to the Blue Mountains and the Zumwalt Prairie. Darwin decided that he would join us, leaving the Budgies in charge of the apartment. This would mark the first recreational trip in our RV and Darwin’s first trip to the state of Oregon. We followed a tortuous path southward to Joseph, Oregon, weaving our way to canyon bottoms and back up the high plateaus. After an exciting 130 mile rollercoaster we arrived at the Wallowa Lake Trailhead at the terminus of HW 82 and were greeted by paved roads the whole way to to the paved trailhead parking. Though the forecast called for 90% rain, we found clear skies and mild temperatures.

The trailhead area was engulfed in a deep green Larch, Fir, and Hemlock forest with a rushing creek spilling into Wallowa Lake. Our hike started around 9:30AM as we took to the wide and well groomed path which wasted no time in gaining elevation. The first mile was rocky and crossed two bridges before reaching a dammed section of the creek. Shortly after the dam, around 1.5 miles in, pockets of snow and ice began to appear on the trail surface and our path narrowed. As we ascended the forest grew thicker and the snow became deeper.

The temperature was ideal, but there was a sporadic mist/rain, and our surroundings became foggy after about an hour and a half of hiking. We began to post hole quite frequently as the consistency of the snow changed, making for a slow trudge to our destination. The forest began to thin out slightly creating a density of trees that neither Apryle or I had seen before. There were small stands of firs, then wide open stretches in a random patchwork over the landscape. All the while we continued to ascend, though much more gradually after the initial 2000ft of gain.

There were additional primitive bridges to cross, the first had a visible 12 inch cornice that hung over a raging creek below, and the other was not visible, so we skipped across the icy trickling stream. The skies began to clear and we were able to see the granite ridge lines surrounding us. After two more miles of post-holing we finally reached Lake Aneroid and a log cabin YMCA camp. We were quite lucky to get a weather window and clear views of all the impressive mountain panorama. We spent a few minutes enjoying the solitude and resting before the upcoming luge down the snowy trail.

The weather began to turn as we dropped back into the dense cloud. We heard a rumble of thunder and there was a slight drizzle for all but one mile of the remaining inbound hike. We made relatively quick work of the descent given the less than ideal conditions and reached the RV after 13 miles and about 4.5 hours on the trail. Shortly after we finished the hike the rain began to pour and we were surprised with our good fortune to coincidentally chose the perfect time window.

While we enjoyed a long day on the trail, Darwin was mesmerized by the Larch tree outside the window and enjoyed his view point from the dinette, but ultimately he decided he would like to take a walk around the small town of Joseph, so we headed back north for one last adventure. The main street is lined with shops that combine country charm with a hippie chic and the Mule Deer outnumber the people. There were many sculpted ungulates, bear, mountain lions and wolves, as well as unique painted murals of mountain scenes and beautifully landscaped gardens. However, the majority of the town was still closed for the winter, so we made our way back to the trailhead to rest up for the next day.

In case anyone is searching for spring 2018 hiking conditions for Wallowa Lake Trailhead hikes, hopefully this text will help you find this trip report for Aneroid Lake and Blue Mountains Oregon spring conditions update.