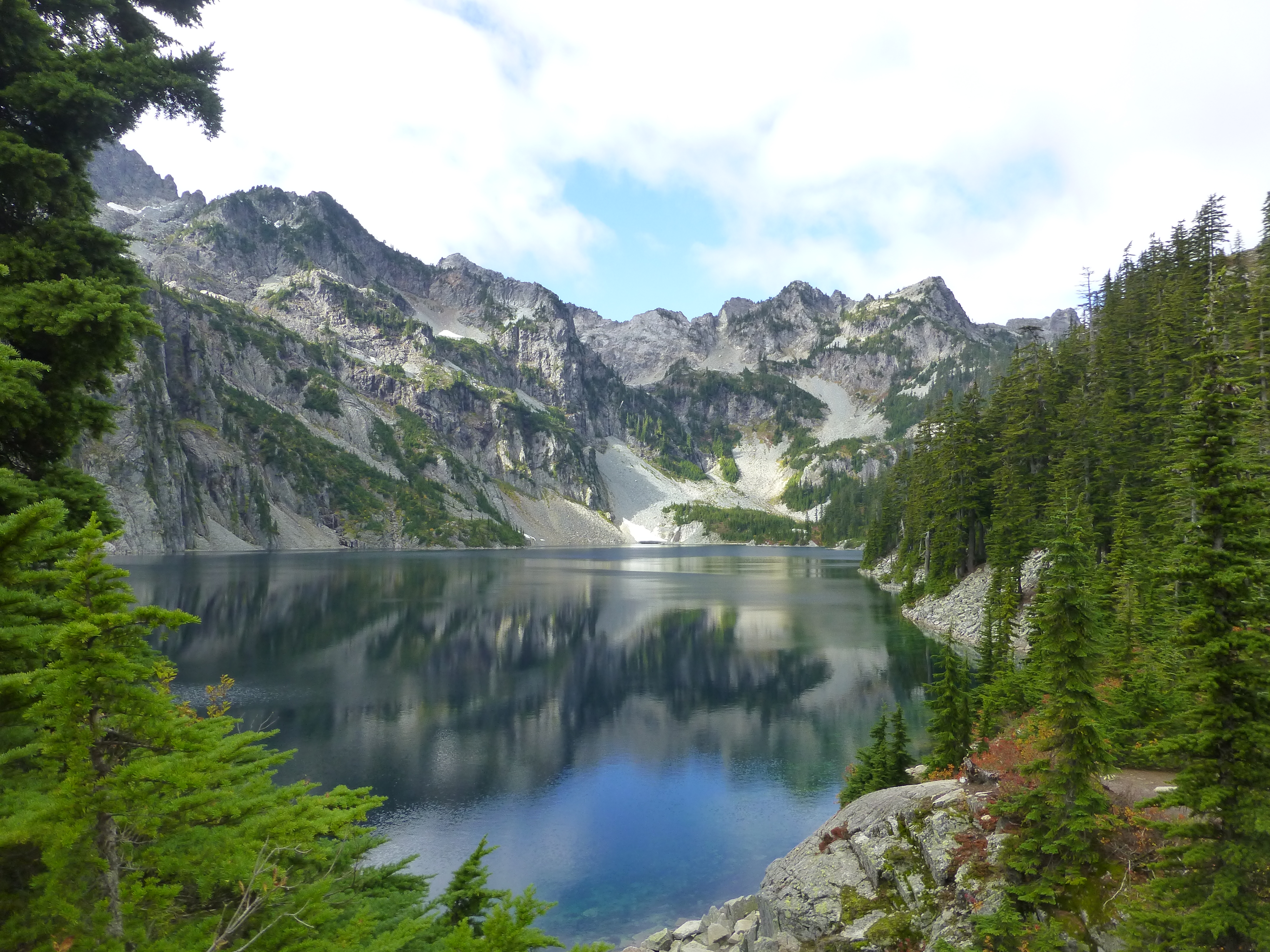 It is difficult to quantify the beauty of the state of Washington, with an infinite amount of wilderness to explore. But if I was forced to choose my favorite destination for the year 2018, the Alpine Lakes Wilderness would be my pick. I was fortunate enough to take four trips to the area this year and was continually impressed with the diversity of landscape and quality of scenery.  I traveled a total of 63.70 miles with 25,753 vertical feet and enjoyed roughly 26 hours 5 minutes 28 seconds in those four trips spanning from August to November.

Apryle and I started up a rutted out forest road that the Versa had just enough clearance to make it through and arrived at the Beverly Creek Trailhead on the morning of August 10th. We began our journey on the Beverly Turnpike Trail and then elected to take the loop counterclockwise along the Bean Creek route. The trail gradually ascended, following a cascading stream surrounded by sparse forest, indicating we were certainly on the eastern side of the Cascades. After three miles we took a tangent up to Earl Peak, a one kilometer round trip.

After returning back to the Bean Creek Trail we encountered a series of long switchbacks that transitioned from scree to green slopes highlighted by a pleasant meandering brook. After 4.5 miles the trail switched names to the Standup Creek trail and we began to climb again as we entered an evergreen forest. Following the short climb we descended even more steeply down to Stafford Creek and the corresponding trail of the same name (mile 6.7). As a side note, the Stafford Creek Trail is the first trail that I ever hiked upon visiting Washington for the first time back in August of 2014.

We ascended back out of the forest and into the furnace, a scorching moonscape up to the County Line Trail (mile 8.8). Here I continued up to the prominent Navajo Peak while Apryle took a quick rest in the shade. We rejoined and then skirted the ridge line up to the painfully steep and hot summit of 6658 or Wrong Turn Peak. From here we had some guess work in regards to our route but eventually slid down the steep volcanic rock slope to a forested ravine. Apryle and I were low on water and overheating at this point, but we spotted a small pocket of snow below us and upon reaching the ravine, sprinted over to the snow oasis (mile 11.5).

After rolling around the snow for a few minutes we continued up the trail along the Old County Line. This stretch, which we followed to the Hardscrabble Creek Trail (mile 12.7) was the lushest section of the loop. There were several stream crossings, with ferns and other riparian species blanketing the ground and made for a pleasant change from the scorching moonscape. The Hardscrabble Creek Trail transitioned back to a steep slope which ended in a saddle at mile 13.4. The trail descended down to the Fourth Creek Trail which we took for about a half mile before hitting the Beverly Creek Turnpike Trail (mile 15.4). The Beverly Creek Turnpike Trail descends along the creek of the same name until reaching the convergence with Bean Creek at mile 17.6. From here we finished out the last half mile back to the trailhead.

Perhaps the most stunning hike/run that I have ever done, highlighted in this post from September 3oth 2018.

Trip 3: Snow Lake/Wright Mountain Out & Back

Apryle and I decided to go for an autumn run in the Alpine Lakes Wilderness starting from Snoqualmie Pass and we landed on the Snow Lake Trail. The trail was a mild and uneventful gradual climb up to Snow Lake, which we reached far sooner than we anticipated (~2 miles). We continued onwards reaching the High Lakes Trail (mile 3.4) and continuing through upland vegetation with a beautiful splash of fall colors. Gem Lake was the next landmark at mile 5, which was also the start of the Wright Mountain climb.

We ascended to Wright Mountain and absorbed the panoramic views of the surrounding peaks as well as the pristine lakes below. From here we also scouted our route for the upcoming bushwhack, and then descended back to Gem Lake before branching out on the narrow but worn path. We made it to the base of Mount Roosevelt and realized that the pass near Chair Peak Lake would take too long to cover without headlamps so we turned back. However, it is definitely a loop that we will complete in the future. We made our way back to the main trail and descended back to the trailhead to cap off another banner day in the Alpine Lakes Wilderness.

My final trip to the Alpine Lakes Wilderness was with Ghislain on November 10th and we started our run on a frigid morning from Esmeralda Basin Trailhead. We quickly encountered snow on the trail around the split for Ingalls Way and continued the ascent at a slower pace to the ridge line. From here we had perfect views of the Stuart Range, but could not find the Longs Pass Trail down to Ingalls Creek. However, we found a faint path that fizzled out around mile three, but we continued down the slope to Beverly Turnpike Creek (mile 4.6). We then followed the Beverly Turnpike Creek Trail up a gully that gained 1000 feet over one mile.

Then we reached the junction with Iron Peak Trail and ascended another 600 feet through deep snow to the saddle. We descended the switchbacking trail retracing Christophe’s footsteps from the previous day until the snow gave way to mud. Finally gaining speed we reached FS 9737 (mile 9.6) and ascended the road the final mile back to the trailhead. Overall it was another perfect day in the Alpine Lakes Wilderness.