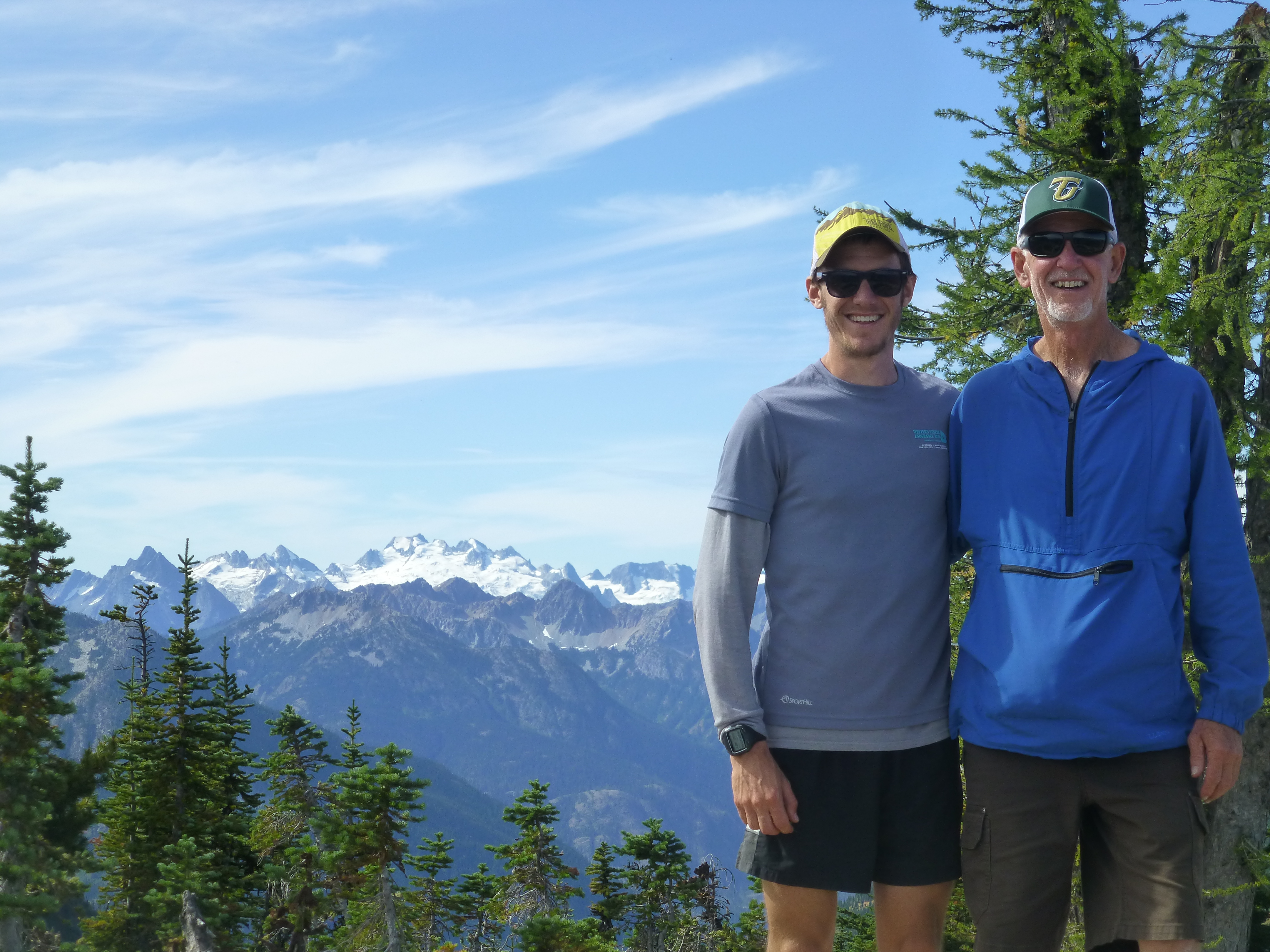 Shortly before our return from Big Montana Adventure I learned that my dad would be flying westward for a visit. Though I was disappointed that mom would not be joining, I was excited for some father son time as well! I developed an itinerary centered around two of my favorite hikes in the state.

The first hike was an out and back to Spray Park from Mowich Lake. Apryle and I had done a 22 mile loop hike from this trailhead in late July and thought we could do a shorter version while still enjoying the highlights. The first part of the hike ascends a thick evergreen forest with a quick side shoot to Spray Falls. Dad handled the ascent just fine and we reached the alpine with beautiful clear views of Mount Rainier.

We then made a side trip up to the saddle of Hessong Rock and enjoyed a front row seat view of the Volcano. I scrambled up to the top of Hessong Rock and then we made our way back to the car. Despite the 34 miles of driving up and down the dusty wash boarded road the majesty of Spray Park was well worth it. Though dad thought the views were stunning, I think his favorite part of the expedition was the fresh blueberries growing along side the trail.

The next hike was a favorite of mine from the 2014 trip to North Cascades while visiting Apryle – The Maple Loop. In my opinion this is mile for mile the best hike in the state. Weighing in at only 8.4 miles (with Lake Ann addition) and 2200 feet of vertical gain this has to yield the greatest return on investment in terms of effort for views. After completing the hike, dad emphatically agreed.

In addition to the panoramic views of the hike, we also enjoyed a full circumnavigation of the state. We drove from Newcastle, over Snoqualmie Pass, up to Soap Lake where dad and I tested the healing waters. Then across to Sun Lakes Dry Falls (my favorite State Park) to imagine the tumbling waters on the now barren cliff sides. From the Dry Falls we traversed the scablands surrounding Grand Coulee until we finally reached Apryle’s study site in Nespelem. We dropped off Apryle and from there Dad and I snaked along the Columbia River until it spit us out in Omak. From Omak we made our way to North Cascades National Park and the start of our hike.

The first part of the hike (in the counterclockwise direction) starts off with a gradual trot through the woods. We elected to take the tangent to Lake Ann, which offered us some perspective of the terrain we would be roaming. Not soon after returning to the main trail we were breaking tree line. From this point forward we took our time absorbing each and every view. Miles two through five offer the best mountain views in the state, hands down. I will allow the photo gallery to explain…

The last three miles descend tight switchbacks back into thick forest and the hike finishes up with an easy walk on a paved trail back to the start. In addition to the views, we enjoyed fresh blueberries and even caught a glimpse of a Black Bear on a distant slope. We finished our scenic circumnavigation of the state and landed back in Newcastle just in time for rush hour traffic.

After all of the amazing runs and hikes that I have done in Washington it was a special moment to share them with my father. Though Dad has biked along side me as I ran for thousands of miles, it has typically been on ordinary country roads in Ohio, so to share some miles with him on one of the most spectacular places in the country was quite an experience.